In Search of Pelicans in the Avra Valley 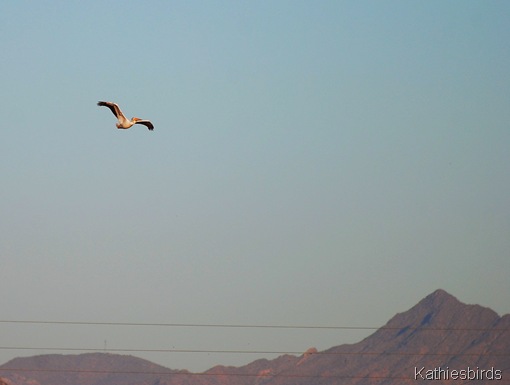 Sunday morning I awoke before dawn and jumped in my car to meet Chris. The sun was just rising as we headed west on Speedway Boulevard and climbed through the Saguaros at Gate’s Pass. With the sun behind us deep shadows fell across the valley on the other side. The air is cool and dry so we drive with windows up and the air conditioning off. When we reach Mile Wide Road we roll  our windows down and start looking and listening for birds. 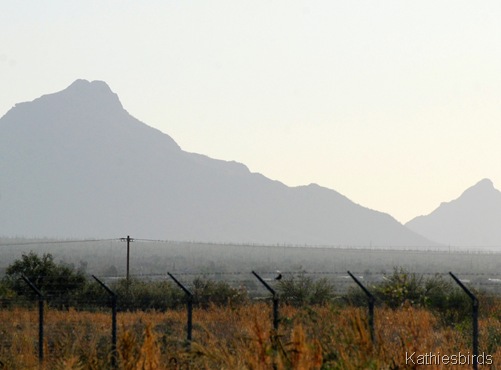 Neither of us has been here before, so we are not exactly sure where to go. The only instructions we have are from the internet which says the Avra Valley Recharge Basins are a mile west on Mile Wide Road after you cross Sandario Road. After passing a few houses and utility wires covered with flocks of mourning doves we find the areas along the road fenced of with no access to the ponds. How does one watch birds here if you cannot see the water we wonder. 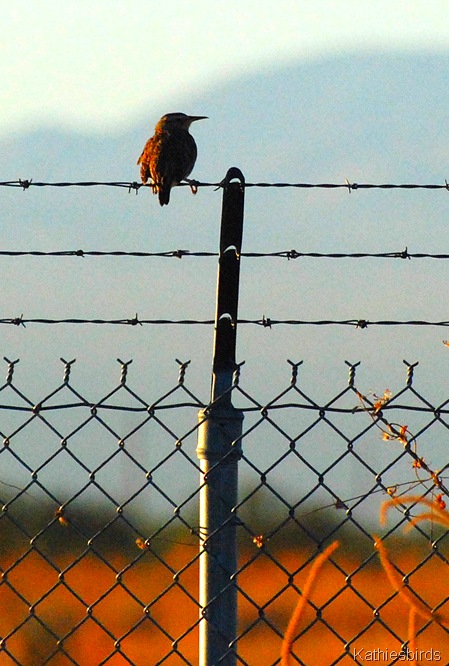 We have already gone more than a mile, so we stop the car to photograph some meadowlarks along the fence line. We decide to make the best of the situation and figure we will not get to see the pelicans this time. We watch as a kestrel flies by and lands on a nearby utility poles. Sunlight streams over the Tucson Mountains to the west illuminating the valley around us. It is a magical time of day, and though it was hard for me to get up at 4:30 AM, I am so glad that I did! 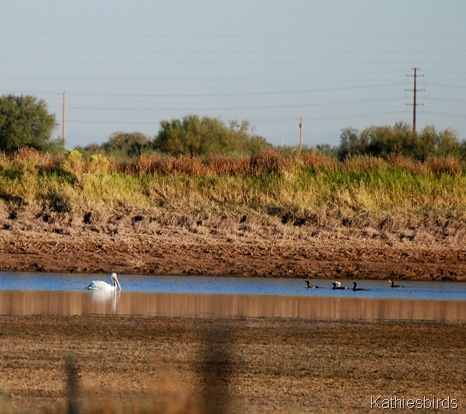 We both get back in the car and decide to drive a bit farther down the road. Chris and I have decided that we both suffer from “The Bear who went over the Mountain” syndrome. It’s in reference to a childhood song I know where “the bear went over the mountain to see what he could see.” We are both driven by our curiosity and the belief that there might be something even more interesting around the next corner! And it doesn’t matter whether there is nor not, we just want to see it! It’s a good thing we kept on driving because at about the 2 mile mark we suddenly found a place where we could see one of the ponds form the road and in the water we saw tow giant white birds! Pelicans! I quickly pulled the car off tot he side and we started watching birds! 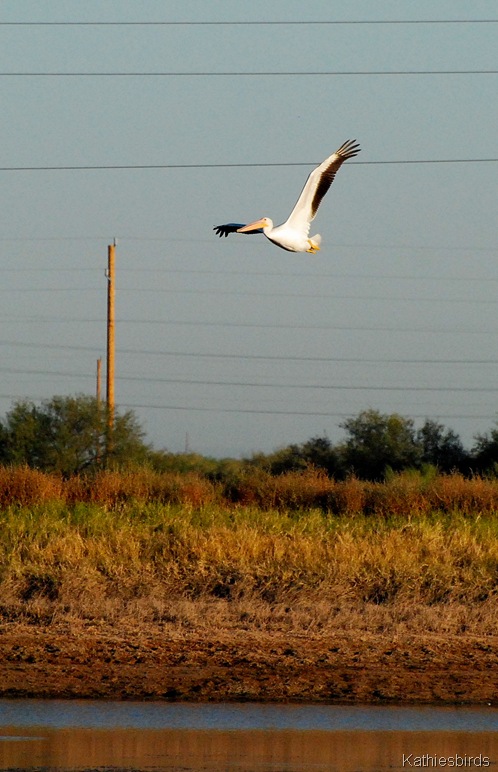 However, standing on  the dirt along the edge of the road put the fence in our line of sight. So, I suggest to Chris that we go back to my car and open the doors on the drivers side and stand on the floorboards. We both went over and did just that and by resting our elbows on the roof of the car we were able to keep out balance and hold our cameras up as we snapped away. 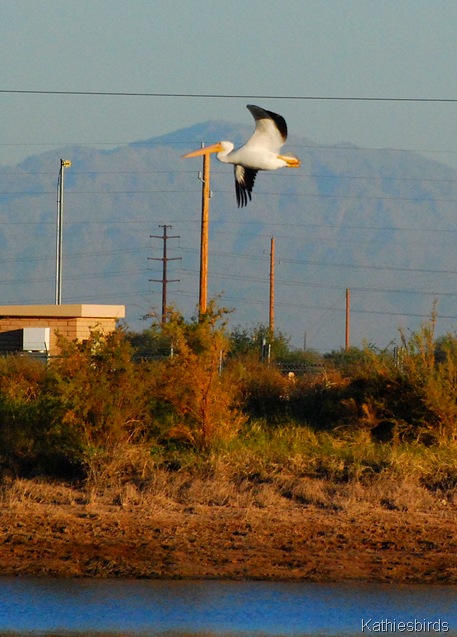 After our initial cries of joy over finding the birds, it soon becomes silent as we focus on viewing and shooting the birds with our cameras. We then start to scan the shoreline for other species and I get out my notebook and pen while Chris records what he sees with his lens. 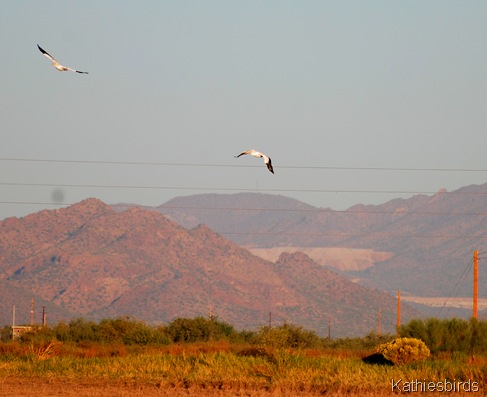 There are 2 great blue herons along the shoreline, along with a great egret. We can see numerous coots in the water and at the far end of the pond there is a small flock of birds, but without a spotting scope they are too far away for a positive ID since all of them seem to be plain old brown! As we are watching and counting birds, the pelicans suddenly take wing and fly up and over our heads. It is all a breath-taking and magnificent sight! 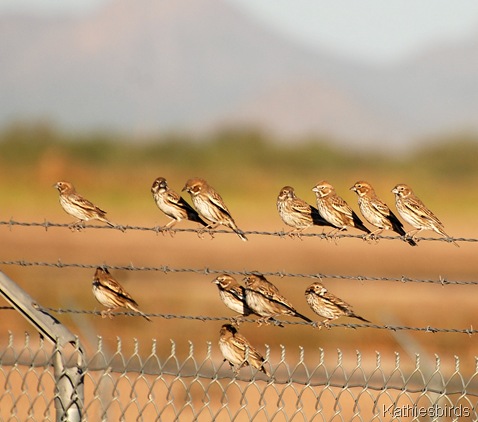 Meanwhile, on the nearby fence the sparrows and  lark buntings gather.  I notice there are a few house finches mixed in. The flock of 40 to 50 birds rises from the grass, lands on the chain link fence, then takes wing again, dropping out of sight. 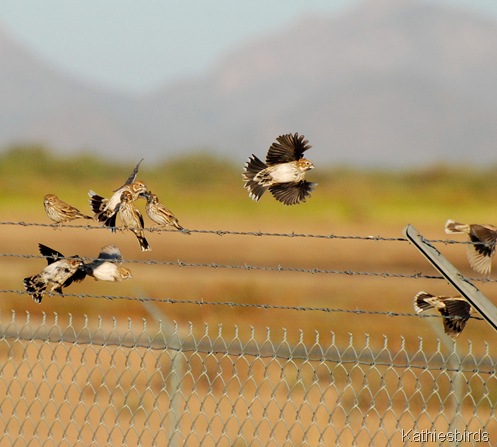 When they do the dark underwing is exposed along with the black tail. These buntings have almost entirely molted to winter plumage but in summer the males are black with white wing patches. Either way, they are a beautiful species to see. 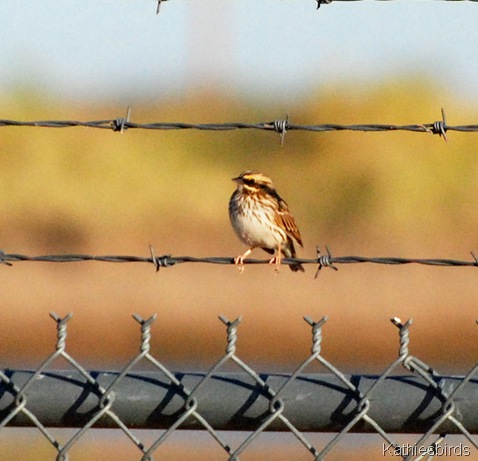 We also see various sparrow species, including Savannahs, Vesper, and White-crowned. We drive the rest of the way on Mile Wide Road to the bridge where we turn around and head back, a total distance of 3 miles in which we watched and counted birds. In that distance we counted 18 species of birds! 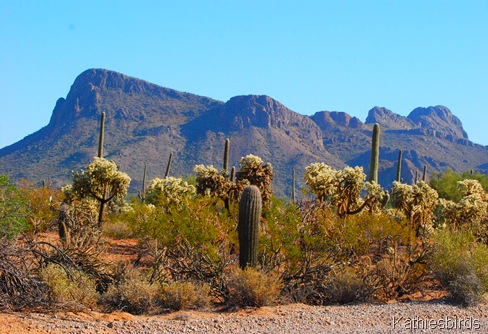 By now our stomachs are growling and though we want to stay and watch more birds we know we need to eat. After a brief stop at the Saguaro National Park Visitor’s Center for a quick bathroom break, we reluctantly leave and drive north to Picture Rocks Road where we head east towards civilization and food!

Note: If you ever take a drive out to Avra Valley to see the birds Saguaro National Park Visitor Center has the only public restrooms nearby! 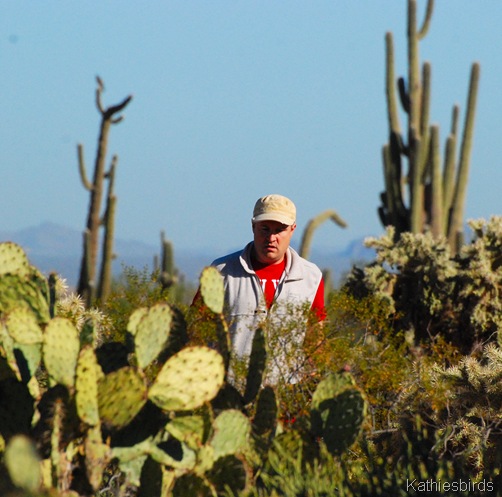 Chris coming through the desert after pursuing a photo of a hawk.

As we drive along picture Rocks Road we are startled to see a pair of Red-tailed hawks chasing a Peregrine Falcon! I quickly pull over so Chris can get out to see if he can get a shot, but the birds are too fast and are gone. By now the temperature has risen significantly and we drive with the windows up and the air-conditioning on. A little farther down the road we spot another hawk on a saguaro, so once again I pull over and Chris gets out to see if he can get a decent shot. 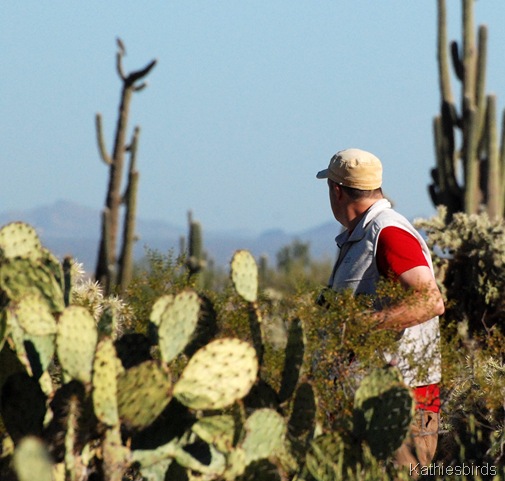 Chris walks farther and farther off into the desert before turning back. You can just see the silhouette of the hawk on the top of the saguaro in the upper left corner of this photo. Chris took one last look, then headed back to the car. As soon as he  turned away, the hawk flew off! 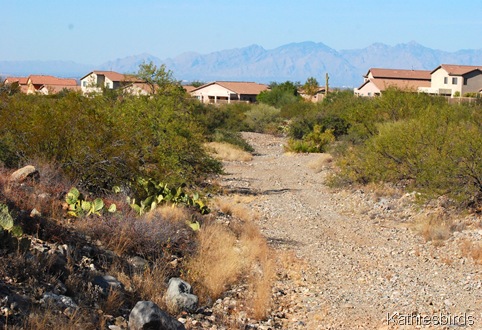 After a hearty breakfast at the Crying Onion on Orange Grove Road I convinced Chris to take a drive with me to corona de Tucson. I wanted to show him sycamore Canyon where I use to live and bird. In the tow years that I have been gone a lot more development has gone on, in spite of the economy. Many of the open areas now have housing developments, but he wash itself will never be developed. It is mid-afternoon by the time we get here and it is hot and dry. the sand and gravel crunches beneath our feet as we trudge up the dirt road, then head down into the wash to walk back to the car. We see a lone thrasher and a Phainopepla on the same tree where I used to see it when i lived her before. We find one black-throated sparrow in the cholla, and a few cactus wrens in various places, but mostly it is quiet, and we are very hot. 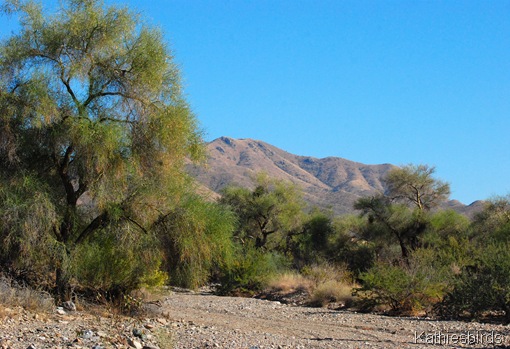 So far the mine has not gone in and people are still fighting to keep it out while the mine owners are doing everything they can to put it in. Who know what the outcome will be. I fear that once again big money will win over saving this pristine and tranquil place. Chris and I are both yawning with exhaustion as we climb back into the car and blast the air-conditioning. It is now 3 pm and the temperature has risen to 85F degrees. Still, we drive home happy and I am secretly singing,

After this the bear goes over the river and the ocean with the same result but I don’t think he or she really ever scratches that itch to see what is on around the next bend! This means my birding adventures are not over and neither are Chris! In fact, I think they may only just be beginning!