A Morning at Essex Woods in Bangor, Maine

On September 12, 2015 I happened to be in the Bangor area and decided to check out the Essex Bog. I had seen other birder's reports and photos on eBird and the Maine Birds Facebook page but had not been able to get there myself before this, so it was with eager anticipation that I parked my car and headed down the trail. it was a bit of an overcast day, but not too chilly. I could see the bog before me, and beyond it I-95 rolled by with cars whizzing past. Like many urban areas, the birds had adapted to the constant noise and went about their business.

There weren't a lot of birds around, but I did count 18 species, most of them birds associated with water, plus a few woodland species like woodpeckers and nuthatches. You can just see the trail in the above picture. What you can't see is how steep this hill is! I had to be very careful not to slip as I walked down the damp slope. While the trail went left into the woods, I decided to go right because I saw a kingfisher on a branch out in the middle of the bog. I also knew I wanted to stay closer to the water to see what I could see and I could see the trail to the right looped around the end of the bog and I would be able to get closer to the open water on the other side.

The trail did enter a bit of a woodland briefly around the southwest end of the bog. I found some cedar waxwings nearby here.


On the other side of the bog I was delighted to encounter this solitary sandpiper, my First of the Year! I was lucky to get it before it headed south for the winter!

Of course, there were the usual Mallards hanging about. Most of them were quite tame as if they have been fed before. But I also found some Green-winged and blue-winged teal, which was nice, but they were so far across the bog and in the weeds and stumps that I was not able to get a decent photo of them. They were a bit more shy and moved into cover when they spotted me.

A big surprise was this merlin that showed up. My, are they ever fast! It flew out of this tree and back a couple of times before taking off and disappearing for good.

When I spotted these Great Egrets across the bog eBird flagged them as rare. I guess they should have already migrated, but there were at least 4 of them still hanging around. They were so far across the bog and in such a hunched position that I almost thought they were Cattle Egrets when I first saw them, which would be an even rarer occurrence! You can see the yellow bills on them. Snowy egrets would have black bills.


I had a great time at the Essex Woods bog and would definitely go back again. I can see why it has been named an eBird Hotspot! 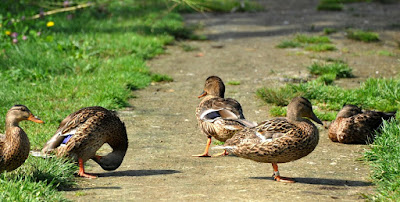