It's Been Too Long

It's been a very long time since I have written a blogpost, and of course so much has happened. Suffice it to say that we have moved 4 times in 4 years since moving back to Maine in 2014, but we have finally bought a house and plan to settle down. After spending a year at a lovely house in Jefferson, Maine, we fell in love with the midcoast. So, when we decided to buy, we searched this area and could not believe with when we found a house that met all of our needs, plus sat on 20 acres of land! Finally I would have my very own wildlife sanctuary! 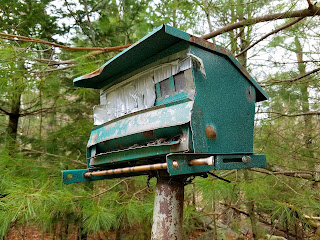 The previous owner left behind a single bird feeder riddled with buckshot holes. While it is still in the backyard, it did not take me long to set up my own feeders and my birdbath.

A birding friend gave these two feeders to me when she came to visit. They have since become some of my favorite feeders because they are easy to fill and clean, and the birds seem to like them. Thank you, Lois! 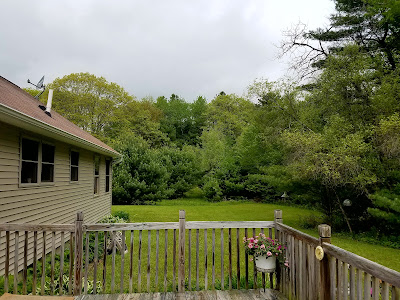 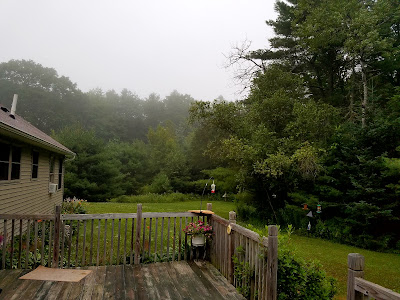 These webs would show up only on misty, fogy mornings in late summer. They would last for a few hours and then disappear. But when it happened, it gave the yard a mysterious, spooky feeling. I never saw what creature made them. 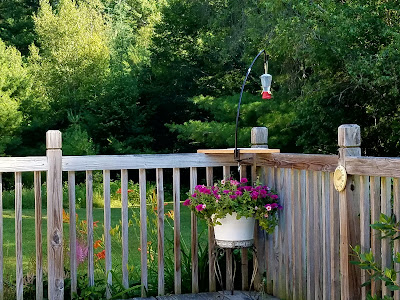 Towards the end of the summer I had three hen turkeys with their poults coming to the yard to feed beneath my feeders almost everyday. If you look carefully you will see there are chicks of various sizes. It seems one hen takes charge, and all the poults follow her, but the other hens follow along and help out as well.


These nest boxes were here when we moved in. There are actually 4 of them. I had at least one, if not two pairs of tree swallows that nested here last summer, but in the fall when I went to clean the boxes out, I found two of them with mice nesting in them instead!


We left part of our yard to grow wild for the butterflies and birds. After nesting season we cut it down for winter to grow wild again next spring.


Yes, it is a small tree, but we wanted it that way so we could put it up on a table out of reach of our new puppy! 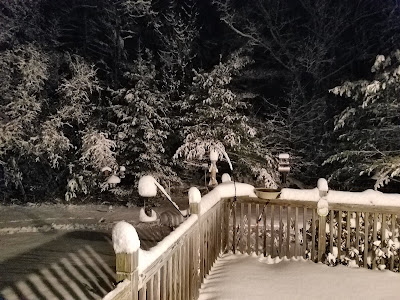 I had to switch to the heated birdbath for winter. All the birds love it, but so do the squirrels! During the blizzard and the arctic blast we just endured, this little birdbath provided water for all creatures great and small. However, on Saturday when the temp never rose above -4 degrees Fahrenheit and the windchill was 20 below, it did start to form a thin sheet of ice in the center with a bridge attached to the edge. I broke it up this morning, and added fresh water.

Did I mention I have turkeys in my yard?


December 17th was the last day to add a New Yard Bird to The 20 Acre Wood Yard in 2017. This single bird was here for only a week or two and then was never seen again. Last year in Jefferson I had dozens in my yard all winter.


I had goldfinches all spring and summer, but when Autumn came they disappeared and I did not see any for a couple of months. We had a very mild September through November, but once the cold weather returned, so did the birds. I keep hoping for a Common Redpoll or a Pine Grosbeak, but so far, no such luck.

This female Red-bellied woodpecker showed up this fall and has stayed ever since. She is species number 88 since I moved here in April. I have had Red-bellied Woodpeckers in every yard since moving to Maine, but they are usually only there in Winter. They must go someplace else to breed and nest.


Author's Note: I have not written in so long because so much has changed with computers and the programs that run them and process photos. It soon became too overwhelming for me with everything going on and I gave up. I bought this new computer in October of 2016, but have since barely used it. However, my youngest brother has been encouraging me to write again, and my Best Birding Buddy was just here visiting and he inspired me to get back at it. On a whim I turned my computer on tonight and decided to see if I could add photos from my cell phone to my blog easily, and low and behold, I could! So, while these are all cell phone shots, at least it is a start. Hopefully I can keep this up, because I have missed it.