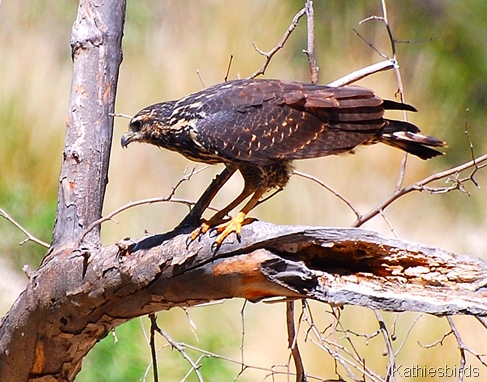 Until last month I had only seen a common black Hawk once and it was a juvenile. I saw it in upper Sabino Canyon by accident when we took my son and grandson for a ride on the tram. We got off at one of the stops near the top and fortunately I not only had my binoculars, but I also had my camera! I found this large raptor on a branch overlooking the creek. It then hopped to the ground where it proceeded to hunt for frogs from a rock on the bank. At this point I did not even know what bird I was seeing and had to look it up when I got back home. The juvenile Common Black Hawk is much streakier than the adult, but the profile and the behavior are still the same! 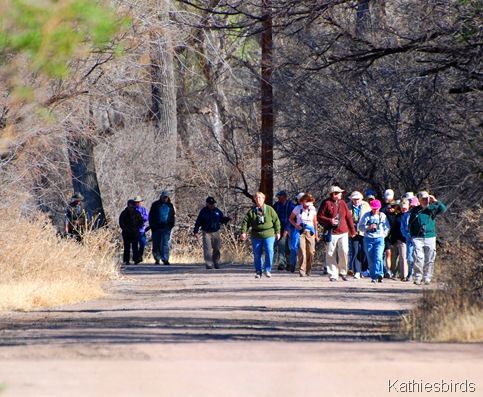 In mid March Chris called me up and asked if I would like to go watch the Black-hawks lift off from Ron Morris Park in Tubac. It sounded like fun to me, so off we went. Our intention was to go see the birds early in the morning, then head home. When we arrived, I had no idea there would be so many people! There were crowds on the road near a bridge over the Santa Cruz River. Chris had read that you were not suppose to stand on this bridge and shortly after we parked our car we saw the whole crowd walking into the park. 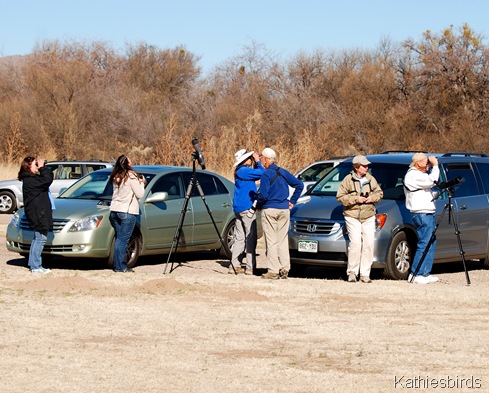 The park itself was already full of birders with scopes and bins all lined up and waiting for the great lift off. Believe it or not, I can get quite shy and reserved when there is such a large crowd. I wanted to bolt ins spite of the chance to see this rare raptor but Chris encouraged me and we parked the car and got out. Chris is much more social than I am, so he went up to some of the other birders to get the latest info on the situation. Then, while everyone else stood watching the sky over the cottonwood trees that lined the river, Chris and I started our eBird count as we walked the perimeter of the park. We saw Vermilion Flycatchers, sparrows, and nesting ravens. We were at the far south end of the park and away from the crowds of birders lined up along the edge of the parking lot when suddenly the bird erupted overhead. A Ferruginous hawk, red-tailed hawk and several turkey vultures took wing, catching the warming thermals, and then, there they were! Black-hawks overhead! 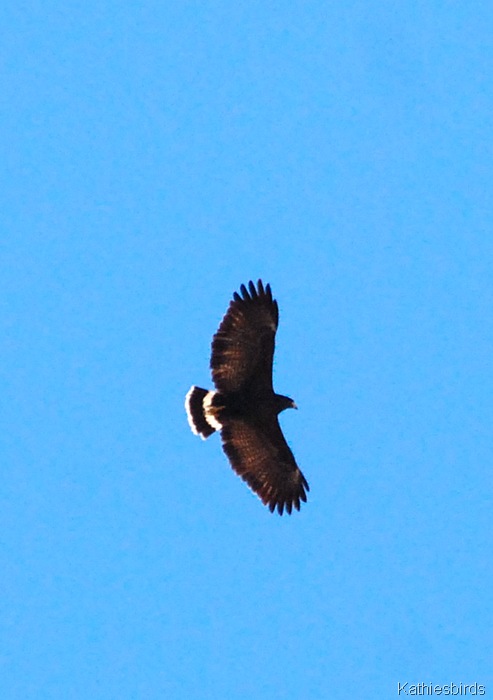 We watched as hawk after hawk took to the sky, circling overhead for more than 20 minutes! Our necks felt like they would snap, but we still kept looking and taking pictures! If you look carefully, you can see that there is more than one hawk here as one of the hawks has a missing primary feather in its wing. Of course all these photos are cropped and enlarged as the birds were several hundred feet overhead. 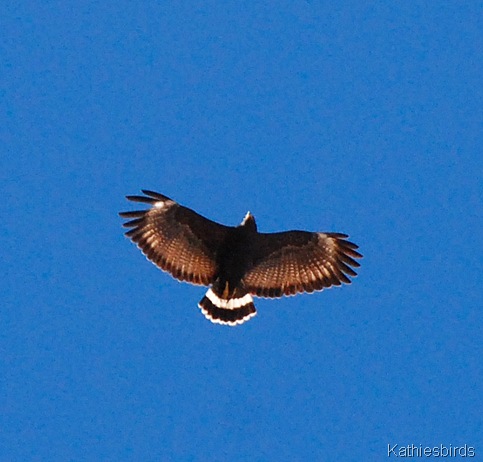 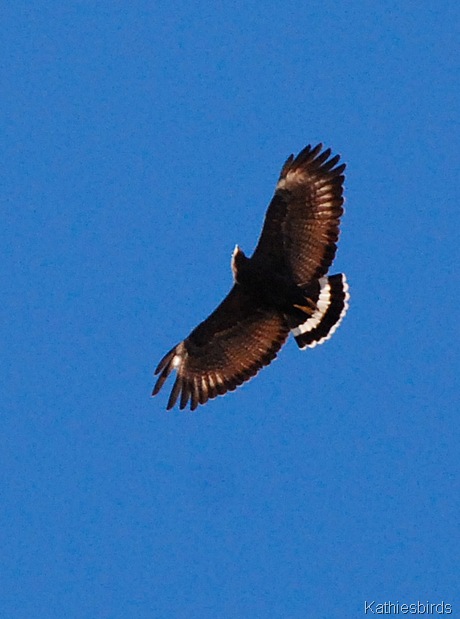 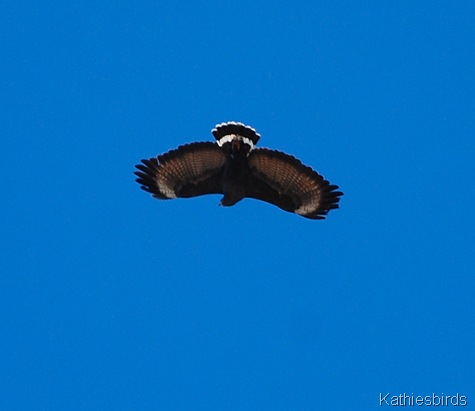 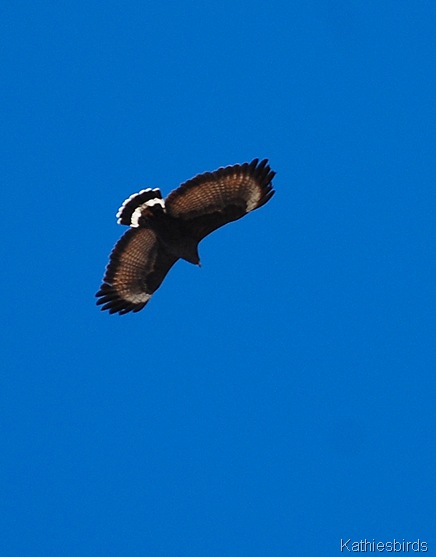 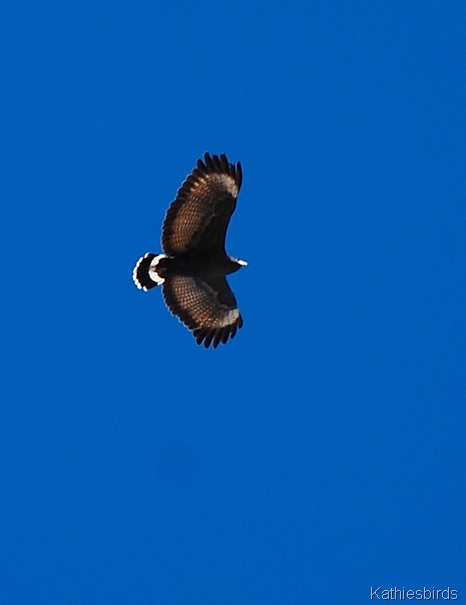 Just look how big and broad these wings are! They rival any superhero’s cape! 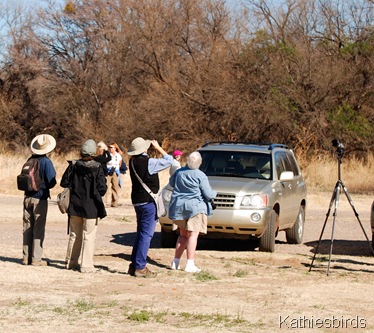 By now everyone’s eyes were on the birds and suddenly we all had this experience in common! I no longer felt like an outsider. I felt like the birder I am! In the end we also saw a Northern Harrier, and 2 Cooper’s Hawks along with 20 Turkey Vultures, 12 Common Black-hawks, 1 Ferruginous hawk and 1 Red-tailed Hawk! What an experience! We counted 24 bird species here on this day but the Black-hawks were obviously the best sighting of the day. I just wonder how many people had to visit the chiropractor afterwards! 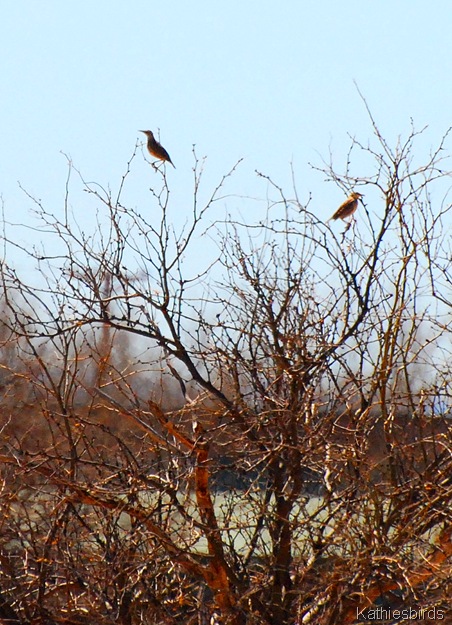 As we headed north towards Tucson again we decided to stop at the Amado Wastewater treatment Pond. We counted several birds here, including a few elusive meadowlarks in a distant tree. Then we decided, what the heck, we’re going right by Madera and Florida Canyons, let’s see if we can find that Rufous-capped warbler again. So, drive up the dirt road. Park the car. Hike uphill. Climb the dam. Sit and wait. No Rufous-capped Warbler…again. This was our second time trying to spot this bird. While Chris went even farther up the canyon, I sat in the shade and watched and waited. My reward was a pair of Rock Wrens who came out to bounce and trill on the rocks for me! 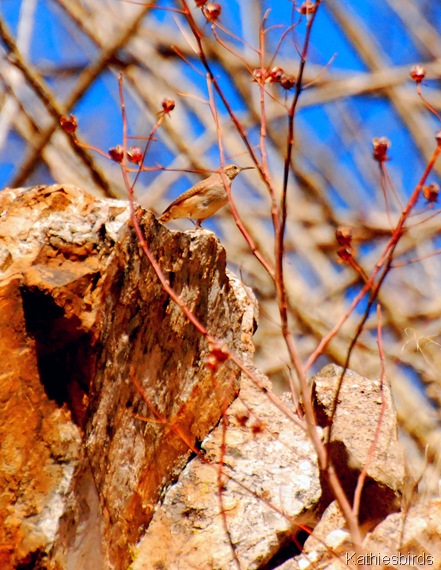 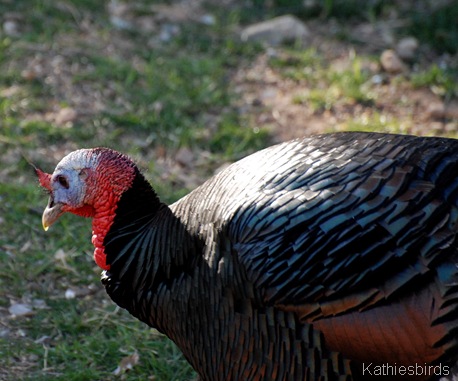 By the time we finished with Florida Canyon it was late afternoon and we had not eaten any lunch. Still, we decided to drive over to Madera, just for a quick look, and sure enough, the Wild Turkeys were at the Santa Rita Lodge feeders! Oh well, who doesn’t love a good Wild Turkey picture!

Then, I made Chris take a short hike on the trail behind the Madera Picnic area, since he had never done it. It was so quiet and peaceful in there. Tall sycamores and Alligator junipers towered overhead. The creek tumbled merrily over the smooth white and gray rocks. With the sun already going down, the canyon was in deep shadow and the temperature was dropping. We only hiked a short 1/2 mile, then turned back. In the dusky shadows it was Chris who saw it first and told me to STOP! I know him well enough to not feel offended at this command. Since I was in front of him, I froze in my tracks. Chris was already snapping away as I looked ahead, and there on a branch in front of us was a Hammond's Flycatcher! Not a bad find for the end of a good day of birding! It was a day that started with Common Black-hawks overhead, and ended with an empid in the woods! 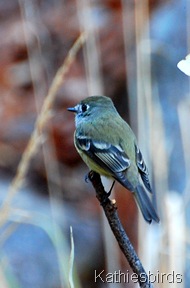 Come click over to Kathie’s Poet Tree where I am participating in a challenge to write 30 poems in 30 days from NaPoWriMo 2013 for National Poetry Month! Because, as you know, I don’t already have enough to do!