Notes From My Nest: Yard Birds and More 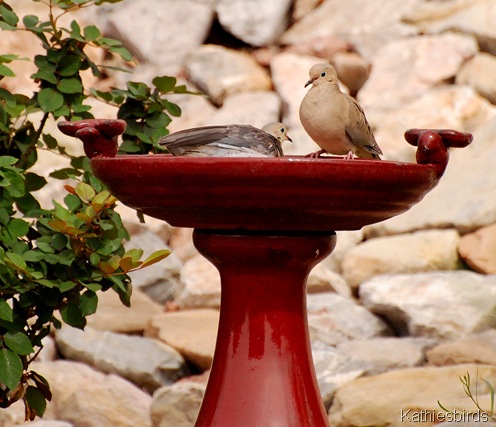 Migration is in full swing around here and nesting season is well underway for some species. My mourning doves have already laid two clutches of eggs which promptly rolled off the narrow ledge they chose for a nesting sight and then smashed on the patio below. I am seeing young goldfinches begging their parents for food in my yard already and I watch as the parent bird pull out a seed and place it in the young one’s beak. soon these youngsters ill have to fend for themselves as the parents leave to lay more eggs and start the cycle all over again. March and April have brought many new species into my yard and I am sure I will see even more before the summer arrives. 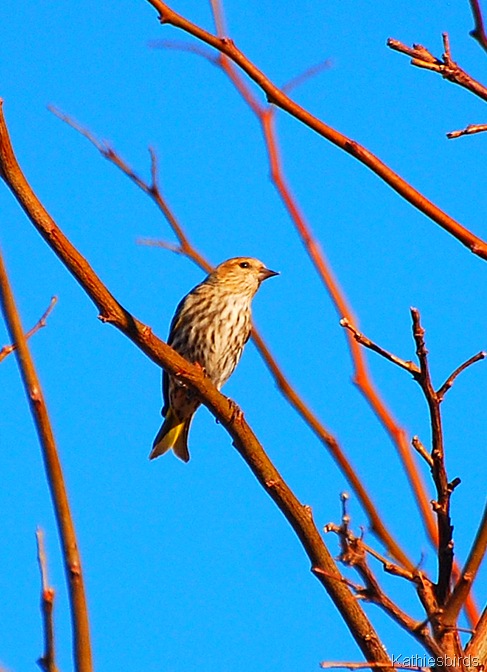 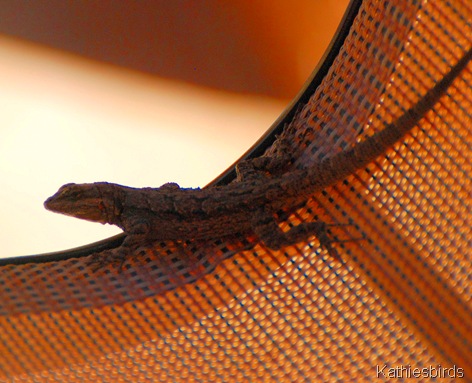 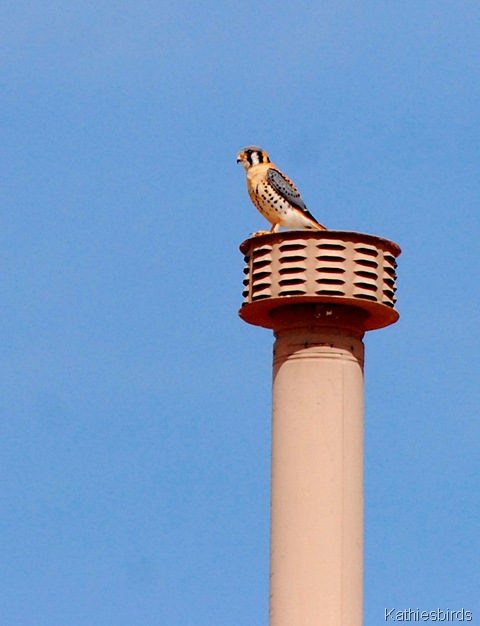 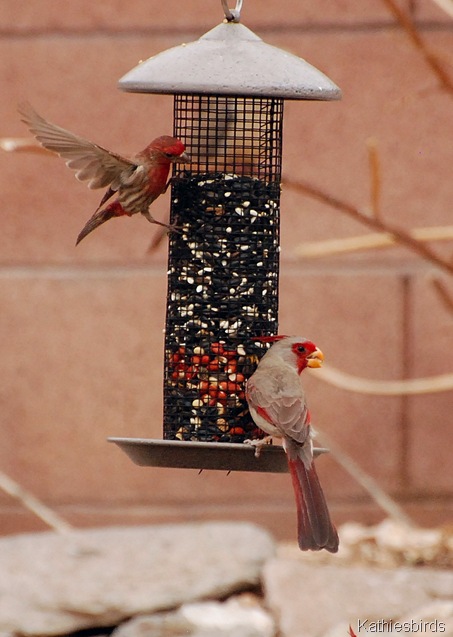 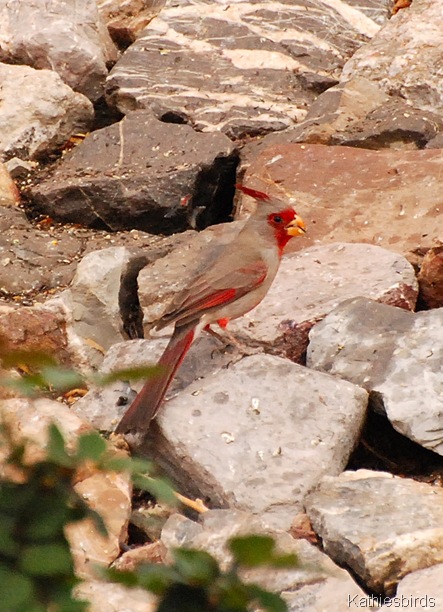 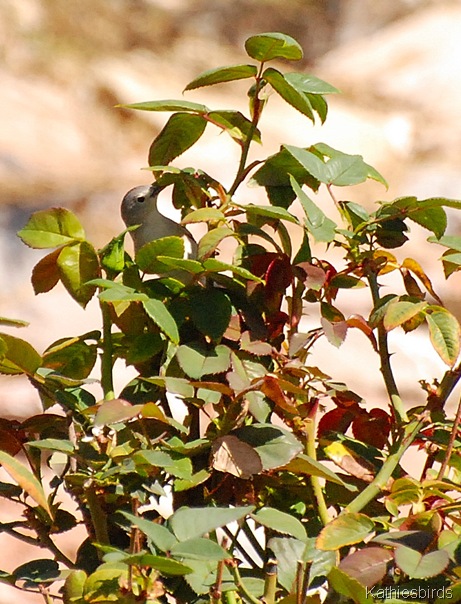 I had a pair of Lucy’s Warblers* hanging around my yard for about a week or two as the mesquite trees leafed out. The trees are in full foliage now and I haven’t seen them in over a week. Can you find this one in the rose bush? 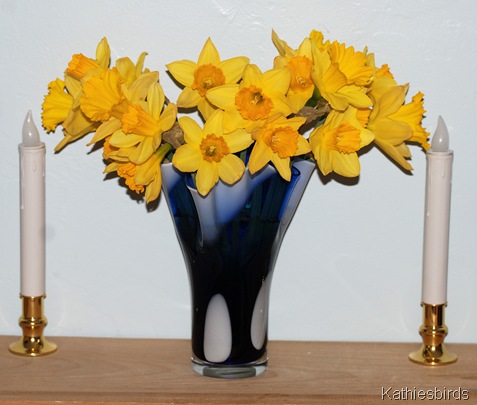 We don’t get Daffodils here in Tucson as far as I know, but I really love them in springtime. So, I bought some from the store and when these faded, I bought some more! Not only do they look good, but they also have a lovely fragrance that fills my house with the scent of spring! The last bouquet is almost ready for the trash again. Then I will have to find something new to put in this, my favorite vase! 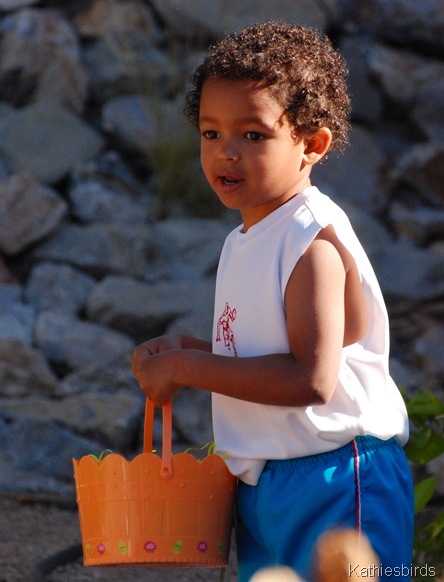 Who doesn’t love a photo of a cute little boy hunting for eggs at Easter! This is my grandson, Xavier. It was so much fun to watch him get into the hunt for Easter Eggs. He soon made a game of it himself and he would walk right by the eggs, pretending not to see them. Then he would turn around and snatch the egg up! All the time he had a running narrative going on. The whole thing became a grand story in his active imagination! 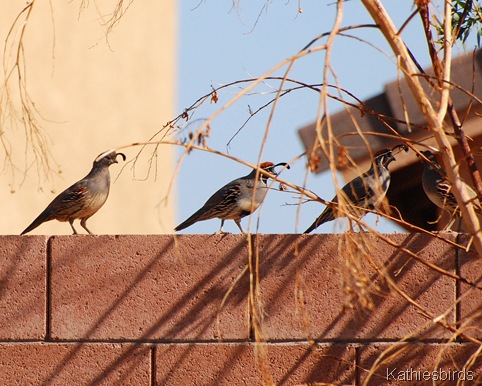 Until last month I had not seen or heard a Gambel’s Quail in my yard. Last month I started to hear them in the distance, so I knew they were around, but I was utterly astonished when I looked out the front window on Monday and saw a pair in my front yard! I rushed downstairs and grabbed my camera hoping they were still out front and I could slowly open the front door and snap a picture. However, I just happened to look out the sliding glass door into the backyard first and low and behold, there were four of them on the block wall! I watched them as they peered down into my yard, looking as if they were trying to decide if it were worth the risk for them to fly down. I snapped these photos through the glass, then, while I was looking down, they disappeared. Too bad! I was so hoping they would come into the yard and like it here! I love quail! 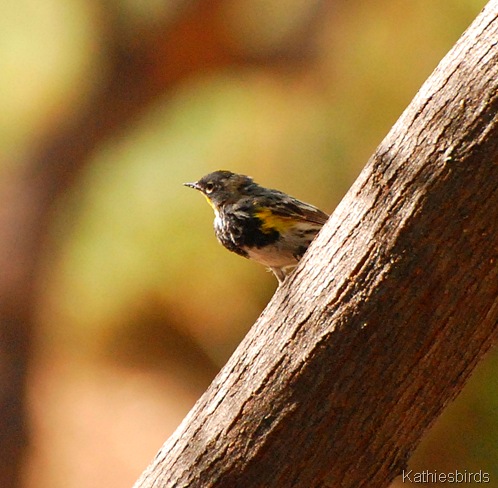 There are still a few yellow-rumped warblers hanging around. While some have fully molting into spring breeding plumage, a few still are mid-molt and they look rather scraggly. I have yet to see if they will stay around all summer or migrate away. For the moment they are liking my fruit flavored suet and the bits of dried pineapple I put out. They also like the Burt’s Bark Butter or Bark Butter bits, but so do all the other birds and they gobble it up so quickly that it is cost prohibitive for me to feed it. 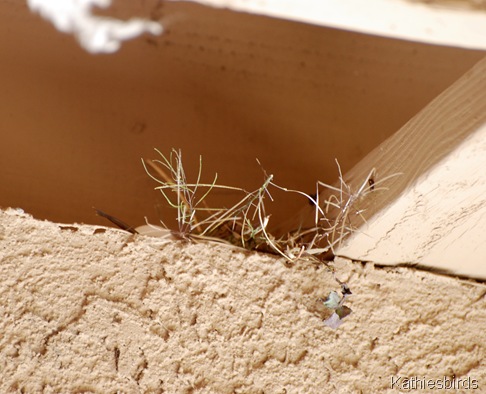 This is the flimsy nest the Mourning doves built on a narrow 4” ledge under my patio eaves. The silly thing is, there are 8” cubbies at the front of the roof where they could safely build a nest but they don’t, even though they do like to roost in there. 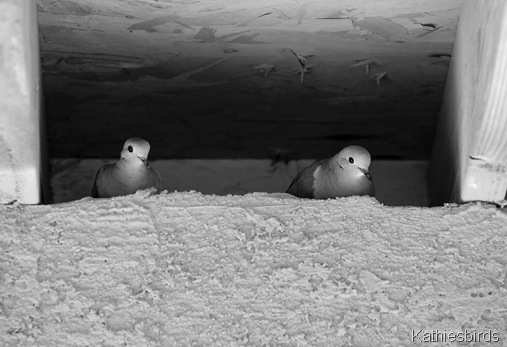 On Monday we had a massive wind and dust storm here in Tucson. that brought in a cold front and rain overnight. Tuesday morning the air was still full of dust and clouds and the temp was much colder after Monday’s high of 82 F. It was so chilly that I had to wear shoes and socks again along with a long-sleeved shirt. When I went out birding in the late afternoon with Chris Rohrer at Sweetwater I even had to wear my fuzzy vest over my long-sleeved shirt! Our high yesterday was only 65 F! Chris and I went in search of the Franklin’s Gull and Red-necked Phalarope that had been reported there. We found the gull but not the Phalarope. However, we did see our first White-faced ibises of the year, and I saw my FOTY Yellow Warbler and American Avocet as well. There was plenty of evidence from Monday’s wind storm with a huge willow down across the path on the east side of the ponds. However, swallows and blackbirds filled the air as we walked the trails in search of our target birds. There were only two other people there, so we pretty much had the place to ourselves, and it was dark by the time we left.

April is National Poetry Month, so pop on over to my poetry blog if you want to see what I’ve been composing! Some days I follow the prompts and some days I don’t. Some poems rhyme, and some are Free Verse. They cover a wide variety of topics as well, including nature and bird poems, with a little bit of whimsy and nonsense thrown in!