The Magic of Madera 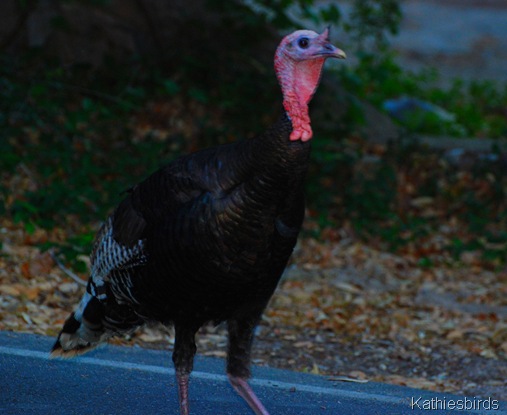 Wild Turkey 5-15-13
I have never gone birding at night before. I was soon to discover how magical it can be. Chris Rohrer called me one day in May and asked if I wanted to go find the Mexican Whippoorwills in Madera Canyon. I have never seen or heard a whippoorwill in my whole life, so off we went. The sun was already setting when we drove into the canyon. Once in the canyon it was already dusk. 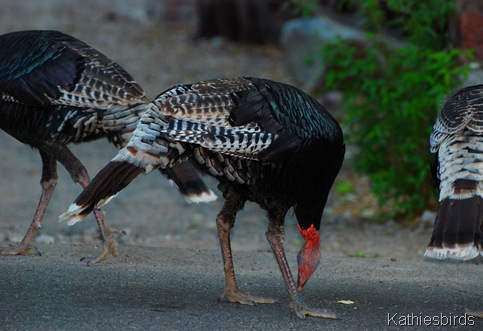 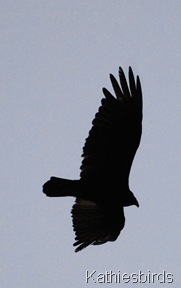 We drove up to the Kubo Bed and Breakfast and got a brief look at some birds there. Across the street the Wild Turkeys called in the gloaming, gobbling as they flew high into a sycamore to roost for the night. It is quite a sight to see such large birds flying up into such tall trees! Overhead a flock of Turkey Vultures circled in a large kettle. In the dusky woods the Dusky-capped Flycatchers called. We got good looks at them, but the dim light made taking photos nearly impossible and I did not want to use flash. It was enough to see the birds. We walked back down to the amphitheater parking lot where we had parked and waited for the Elf Owl to emerge from its hole. Chris sat on the ground with camera in hand but flash off while I just was ready with my bins. But there were other birders there with cameras on tripods all set up and aimed right at the little owls' nest hole. They were around 10 feet away and when the owl poked its head out, one person took a shot and the flash went off. She said, well, it was only once, but how many others come here and say the same thing. I do not object to flash in some situations, but this was far to close to the bird for my comfort level. Chris and I did not want to be part of this, so we backed off and got into our car and drove farther up the canyon.
Here at the top parking lot the light was fading fast. As I turned the corner to the highest parking lot a fox ran across the road and stopped behind a clump of grass. Chris wanted a shot but he could not see it in the dusk, and then the fox ran off. I finished pulling around and parked the car. It was twilight now and that’s when the magic happened. “Whip-poor-will! Whip-poor-will! Whip-poor-will!” sounded from the surrounding forest. We estimated there were at least eight of them! Then we heard the soft “po-po-po” of the Whiskered Screech Owl! Overhead stars filled the night sky like diamonds tossed onto black velvet! Below us in the valley the lights of Green Valley twinkled like a sequined cape laid across the stage of some Las Vegas night Club. And in-between the diamond strewn sky and the sequined earth darkness faded to even darker shadows and silhouettes of the canyon walls. I walked to my car to get something and suddenly a bird flew right over my head! A whippoorwill! Now I have seen and heard them! Chris and I stood there with our mouths agape. I am amazed no bugs flew in! We did not want to leave. We stayed as long as we dared. We did not want to break that magic spell, but finally we left. I felt like I had just experienced one of the most magical nights of my life! But there was more to come. 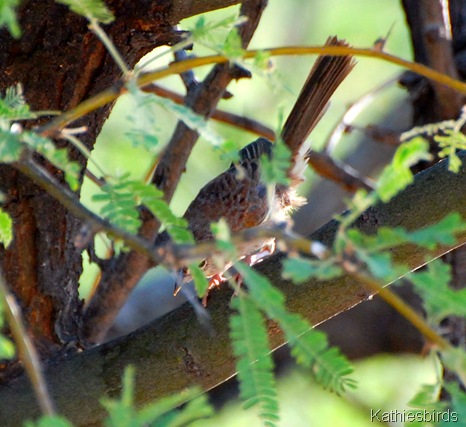 Just 15 days later on May 30th Chris and I were back at Madera Canyon to find Botteri’s sparrow and hear the call of the Buff-collared Nightjar. We arrived a bit earlier this time and we were able to find the Botteri’s on the road up to Madera Canyon. We pulled off the road and used the car as a blind and in this way I got several good views of the bird through my binoculars as well as being able to take a few photographs. 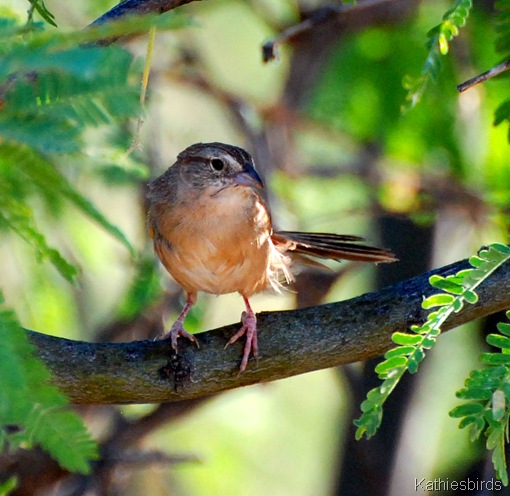 Botteri’s Sparrow 5-30-2013
I was amazed at how flat-headed this sparrow is, and how pretty. It looks quite dull in the bird guides. 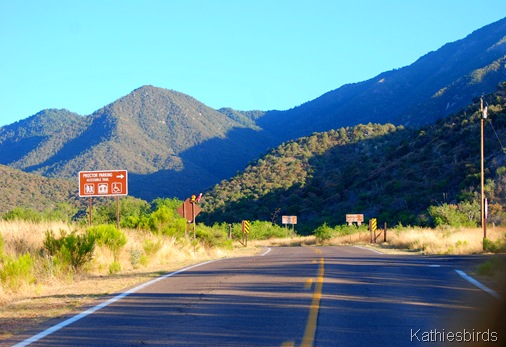 But car after car was passing us. The word had gotten out, and everyone was headed for Proctor Road. 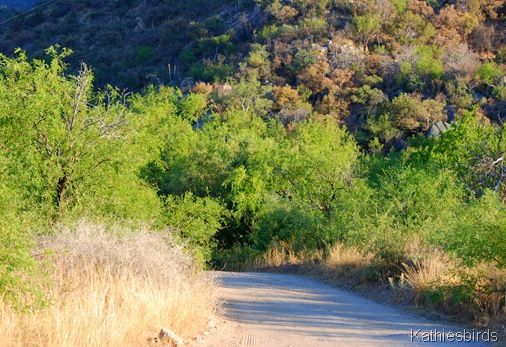 The birds were heard calling farther down this dirt road in a small wash. 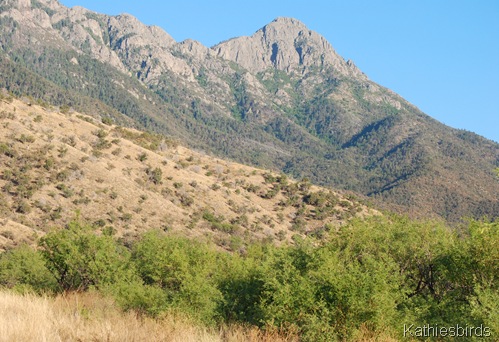 We drove along the edge of the mountains, counting birds the whole way. A few more cars passed us, and a few more came behind. One person pulled off to park in the same location as us. Others were already there. Chris and I hiked in the 3/4 of a mile to the location where the bird was being heard. He had been here the night before scoping things out, so he already had these birds on his Life List and knew where to find them. Now he was helping me. It’s funny how fast the student becomes the teacher! People were standing around listening and watching. A few more people meandered in, then, just as dusk was falling we started to hear the bird! It called from the darkness in the mesquite. We all cupped our hands around our ears to listen better and try to locate the bird. A bird guide with a group of people came tromping down the dirt road. I signaled to them to be quiet and pointed to the area where the bird was being heard. They quieted down and came closer. Now everyone was listening. Suddenly Chris’ flash went off from 30 feet away! I looked up to see a silhouette of the bird flying over my head! It was in the air and then gone, but I had seen it! Soon it was calling again. The darkness deepened and we heard a Common Poorwill as well. We were satisfied.
At this point the group started to break up. Chris and I decided to head back to the car. Other's had already left. Some stayed just long enough to hear it and get it on their Life List. Other's stayed behind to see if they could get a photo of this shy bird. One person was using a powerful lamp to illuminate the branches in hopes of seeing the bird. I was content with hearing, and seeing in the darkness, and just being there! Everyone knows that Madera Canyon is a great place to go birding, but now I know that it is a magical place in the night! Between these two little adventures I added four species of birds to my Life List bringing my total to 447. My new Life Birds are: Mexican Whippoorwill, Common Poorwill, Buff-collared Nightjar, and Botteri’s Sparrow! 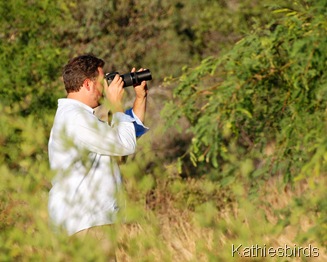 Las Aventuras
Note: While I am here in Connecticut, Chris is in Guatemala. We are both birding separately and will soon be back with tons of photos and stories to tell! Then we will go birding together again!
Also, I believe I have heard both the Common Poorwill and the Buff-collared Nightjar when I lived in Sycamore Canyon. I heard the Common Poorwill only on one occasion while standing outside the house at midnight talking to my brother, but the nightjar I heard each summer in the middle of the night, around 3 to 4 AM. I heard them the first summer I was there in 2007. The night was cool enough for me to have my window open and the strange call woke me up. I rushed out the door to listen and then I described the sound in my journal. I would say there were several birds and they called over and over from the wash behind my house. However, I could never figure out what bird I was hearing and no one I asked seemed to be able to tell me what it was, but when I heard the nightjar on this night it sounded the same as the middle-of-then-night calls in Sycamore Canyon. As far as I know, no one but me goes birding up there, so now I am intrigued. What if a whole flock of these rare birds is living in the Sycamore Canyon wash? When I return from Connecticut I may just have to investigate!
Posted by Kathie Brown at 7:00 AM