Birds in the Quiet of Brunswick Landing 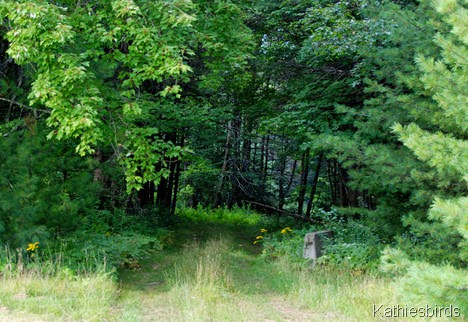 Last night I took a drive through Brunswick Landing on my way to Cook’s Corner to do errands. I told myself I would just drive through and not stop to bird, but it was such a pleasant day, and Gus would not be home until late, and so, before I was even through the golf course I knew I would be starting a bird count. During the day the clouds rolled in, casting a soft light on everything. As I came up over the little rise from the golf course I could already see and hear birds. A gentle breeze rustleD the grass, and I pulled off onto the paved parking area that overlooks the airfield. From this location I have a clear view of the grassy meadow beyond the fence, as well as the pine woods that run alongside the road. I counted the few crows that played in the field, then exited the car to wander towards the forest.

A grassy road leads deep into the trees here, and I briefly considered wandering down the path, but I had no insect repellent, and I was not dressed for such an adventure since I was still in my good clothes from an appointment earlier in the day, a rare thing for me as I am usually dressed for birding and bush-whacking! Thus, I stood at the edge of the woods, and peered into its dark depths, and listened.

The first bird I saw was a female Hairy Woodpecker. She was soon joined by the male as they chiseled at a nearby tree. Then some motion caught my eye and I followed the flittering to find a tiny Golden-crowned Kinglet gleaning insects from the tips of twigs. I heard the call of a Red-breasted Nuthatch coming from the woods. On and on it went as i strained my neck and my eyes searching for it amongst the tall pines. Finally I spotted one on a tree trunk closer to the edge of the woods. Farther in I heard the call of another and possibly a third, but, I only recorded one in eBird. I like to err on the cautious side. Beyond all of this the soft cooing of  Mourning Dove carried through the trees.

There was something so peaceful and magical about standing there at the edge of the woods alone. While a few cars drifted by slowly on the road, I blotted out their sound and listened to the woods. I wondered what secrets it held and what it would be like to wander through them freely. I stayed there for almost a half an hour listening, looking and thinking, but finally decided to head farther into the property and see what other birds I could find. 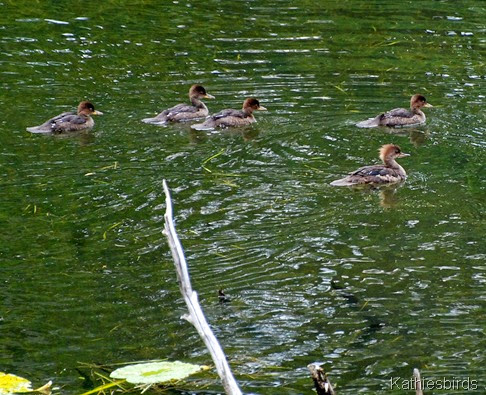 *Hooded Mergansers in Pond Number One on Brunswick Landing

As I got into my car and drove through the defunct south entrance gate a flock of cedar waxwings flew by, landing on the chain link fence that surrounds the airfield. There was one osprey in the nest by the runway, and two more on the nest by the old Baseball fields. Along the main road I found a Northern Mockingbird perched silently on the utility wires, a rare occurrence for a mockingbird! I followed the road to Katahdin Drive and turned right towards the north end of the airfield. Sometimes I find warblers and woodpeckers here. Earlier in the summer there was a nesting pair of phoebes, but it has been awhile since I have seen them. I always slow down and check the pond that is down a steep embankment and surrounded by trees. If you did not know it was there, you would almost miss it as you drove by, and the trees are so thick on the far side of the pond that it is totally invisible from Bath Road which is on the other side of those trees. I always hope to see a duck or a grebe, but so far, no luck…until tonight! I could not believe my eyes when I saw motion down below! I pulled the car over and parked by the guardrail and peered down the slope. In the shallow, but clear water I saw six ducks paddling, but what kind of ducks?

I thought for just the briefest moment they were black ducks, but one of them had a shaggy crest. They were all brown, with thin, tapering bills and they rode low in the water like a merganser, yet only one had a shaggy crest, and that was a bit pitiful looking. Since I did have my camera with me, I snapped off a few shots, then went back to the car to consult my bird guides.  After flipping back and forth from my photos to the bird guide I decided they were Red-breasted Mergansers. The bills were too thin for the Common Merganser, and too long and pale for Hooded Merganser. Besides, Hooded Mergansers are much more compact than these birds were (I thought; see update below). It was the juveniles that threw me off, since none of them had even a hint of color or a crest. None of my books showed any juveniles, but since the mother duck was with them, I decided that it what they all are. I entered my count into eBird, but when I added the sixth bird my list got flagged. Apparently five mergansers were acceptable, but six was too many for this location at this time of year!  But, I have proof! While I did not count a lot of species on Brunswick Landing tonight, I did get some important ones! These are the birds I saw in the 1:45 hours I was there and the 4.5 miles I drove:

After counting the mergansers, I decided it was time to head to the store, so I drove slowly on my way out, looking and listening and feeling renewed. Nothing like a little bit of nature and birding to boost my spirits! And the joy of an unexpected surprise, like mergansers in the pond or a kinglet in the woods only magnified the while experience!

*8-13-14 Update: I was totally wrong! I just learned from the eBird reviewer that these are, indeed Hooded Mergansers, proving once again that I am human and I do not know everything! I have corrected the information in this post and on ebird. I considered hoodies, as mentioned, but thought these birds looked too long and slender for them. I still have a lot to learn and I am glad to have this straightened out! 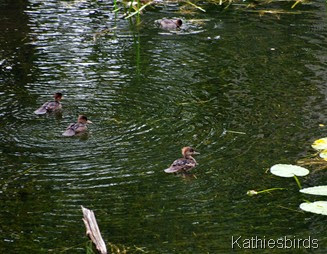 Email ThisBlogThis!Share to TwitterShare to FacebookShare to Pinterest
Labels: Birding ME, Brunswick, Brunswick Landing, Ducks, ME