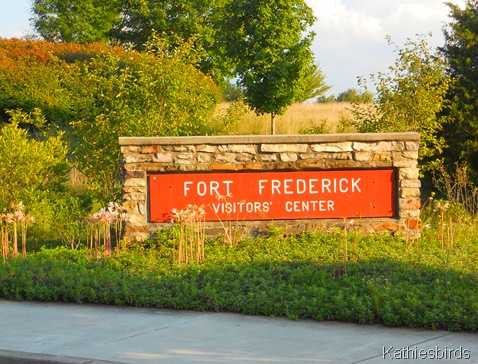 On the first day of our journey from Andover, MA to Tucson, AZ Kathryn and I drove through Connecticut, New York, New Jersey, Pennsylvania, and finally West Virginia! Mile after mile fell behind us and by late afternoon we were both tired of the open road. I had consulted the maps looking for a good place to stop in Maryland since I did not have a single bird count in the state. When I saw Fort Frederick along a major river and just a mile off the interstate we decided it was a good place to stop and take a break. with a gas station nearby, we first filled up, then headed for the park. 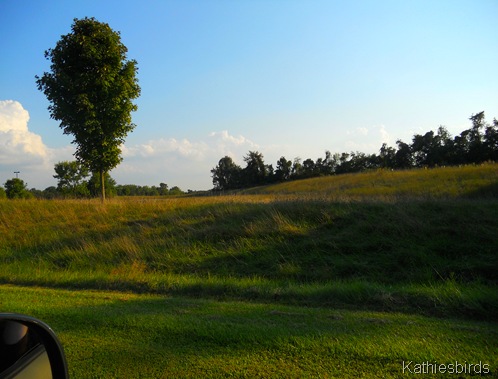 As Kathryn drove we rolled the windows down and let the cool air rush in. I brought two cameras to use on this trip; my Nikon D80 with its 70 to 300 mm lens, and my small Nikon Coolpix which allowed me to carry it in my pocket and take landscape snapshots without having to change lenses. It quickly became the camera of choice for shooting out the vehicle windows! I think of Maryland as one large paved over city, so I was amazed by the green-ness and the beauty I saw before me. Maryland, I apologize. You are a pretty state! 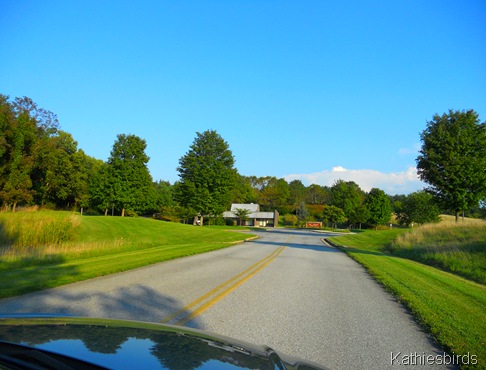 As we drove in the main road to the visitor center we were surprised to find a small flock of wild turkeys down in a low ravine. Crows cawed and flew overhead. Little birds and butterflies flitted in the meadow. We both heaved a sigh of relief and started to let ourselves relax. It was late enough in the day for there to be some coolness, so we rolled the windows down to let the cats breath the open air. Blossom looked out the windows while we watched for birds. 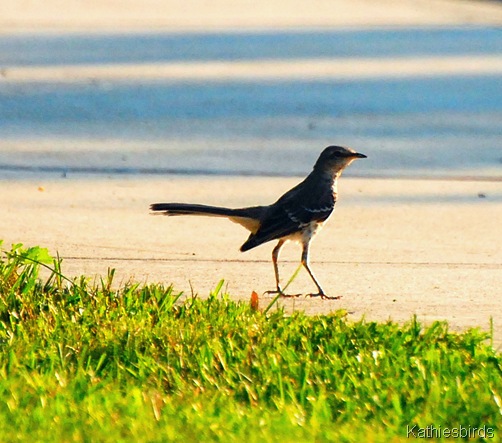 Near the visitor’s center we found mockingbirds, chipping sparrows, eastern phoebes and a brown thrasher. 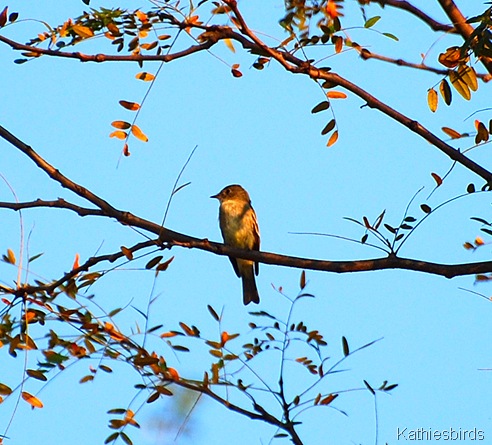 An Eastern Wood Pewee perched on the branch of a drought-stressed tree. 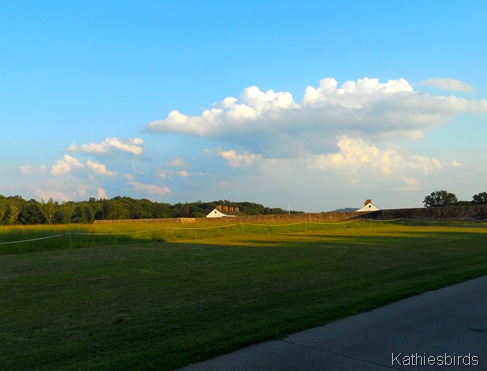 After watching birds at the visitor’s center for awhile we drove through the park and down towards a spot known as The Big Pool. We were hoping to get to the river and perhaps see some waterbirds. 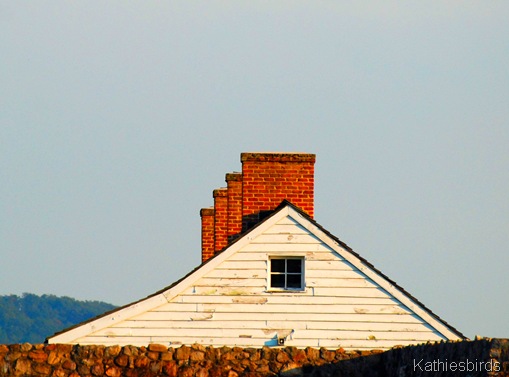 The beauty of the fort captured our attention… 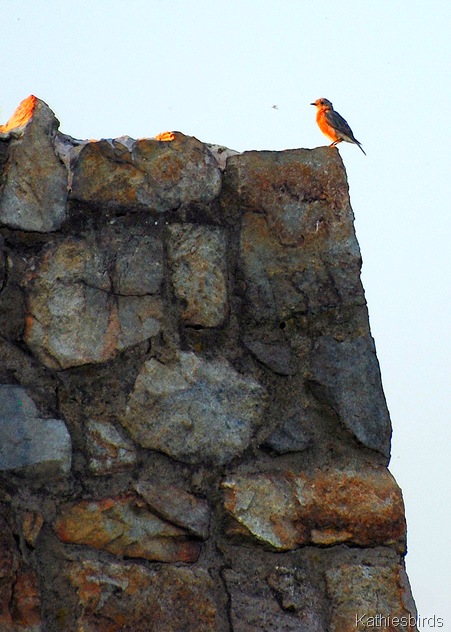 …as well as the birds! I was delighted to find this Eastern Bluebird basking in the golden light the late afternoon sun. 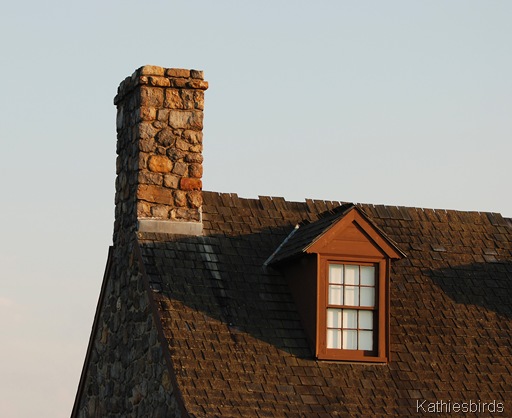 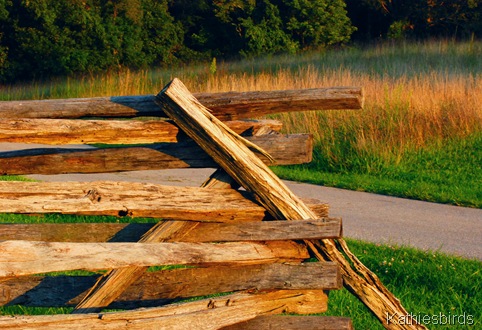 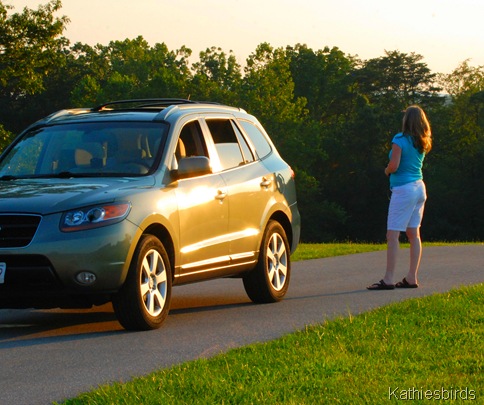 We saw and heard Blue Jays and Robins. We spotted a few barn swallows. We followed the road down to the Big Pool where the only shore bird we found was a Great Egret. there were trails everywhere, but we did not have time to go walking. Besides, we could not leave the car with the cats in it. Eventually we came to the wooded end of the road where we had to turn around because only campers were allowed any further. Suddenly we heard a strange bird call. It sounded somewhat familiar to me, its loud laughter-like call ringing through the deep shade of the forest. Kathryn and I bolted from the car, binoculars in hand as we searched the trees for the strange bird. It was loud and it sounded big. I think Kathryn found it first, but she didn’t know what it was. When I got my bins on the bird I was so excited. Larger than a crow, the black and white bird with a red crest clung to the trunk of a tree. It was a pileated woodpecker! Then Kathryn got excited also, for she had never seen one, though she recognized the sound from her childhood in West Texas. I use to see and hear these birds all the time when I lived in Livermore Falls, Maine. They nested in the trees in my yard and their laughter-like call would ring out over my yard. As we were looking at one pileated, another flew in. I tried to get a photo, but the shade was too deep and they birds were too quick. We watched them until they flew away into the forest beyond where we were allowed to go. As the sun sunk ever lower, we knew we had to get back on the road. We spent about an hour here and it was such a needed break from all the driving. 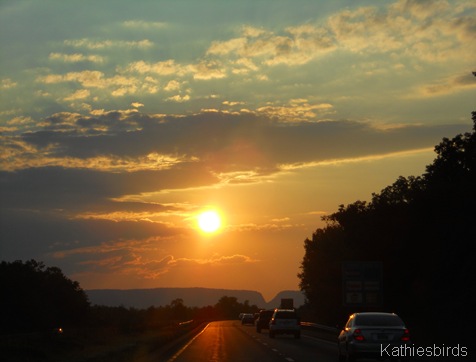 Back on the highway once again we followed the sun west where we noticed a huge gap in the ridgeline. Would we be driving through this, we wondered? 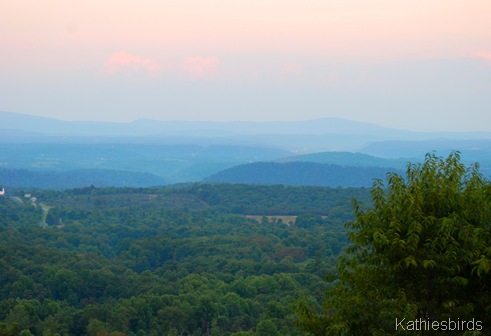 Sure enough we did. At the top of the ridge and in the middle of the gap we stopped at the rest area and gazed back over the misty blue folds of the hills falling away to the east. The east. The place I was leaving behind me. I know the desert awaits me ahead and I will not live in these green hills again. The finality of it hit me as we got back in the car and headed west once again. It would be a couple of hours still before we rolled into Fairmont, West Virginia and our hotel, where we set up the kitty litter and let the poor cats out of their crate to eat, drink, and use the bathroom. With Day 1 behind us, we ate supper and fell into bed exhausted, but happy for the hour we spent at Fort Frederick State Park! 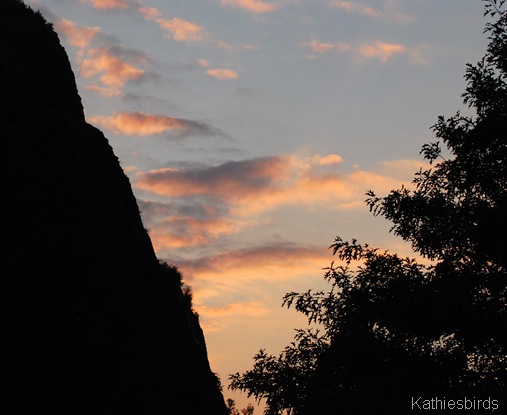 Sunset as seen through the gap in Maryland 8-22-12

Note: I later found out that The Big Pool is considered an eBird Hotspot but the rest of the fort is not. I counted most of these birds in the fort and along the fort roads, so I did not enter this as a bird count for The Bird Pool. I did suggest that ebird name the fort as a separate hotspot. We shall see what happens.