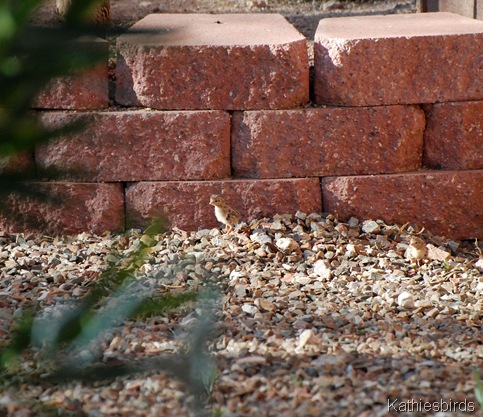 On May 25 I had the biggest surprise when I discovered a family of quail in my yard. The babies are so tiny that they can not climb up the brick retaining wall to stay with their mom. 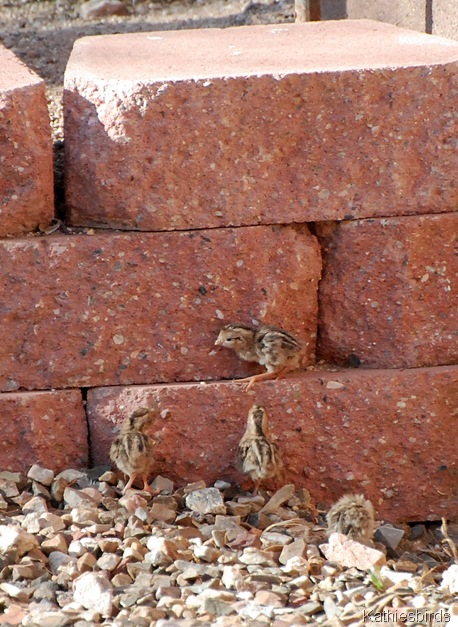 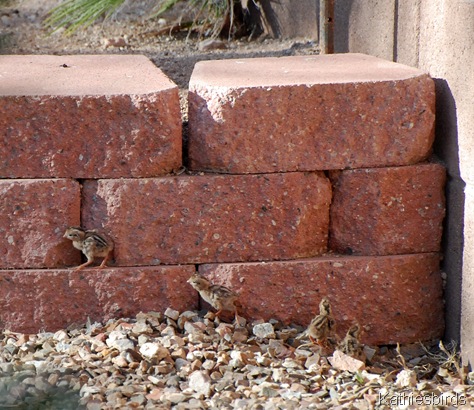 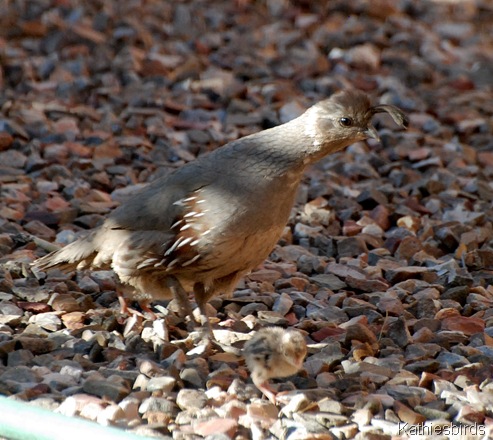 Mom and chicks run around my yard. 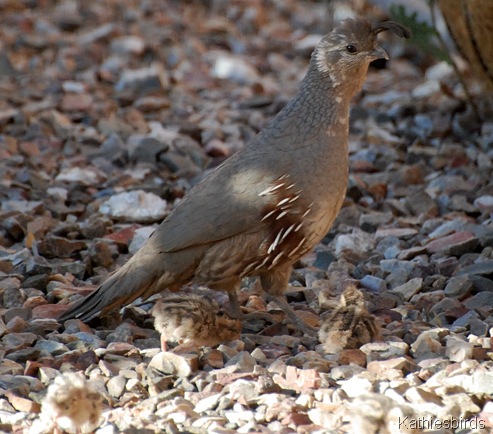 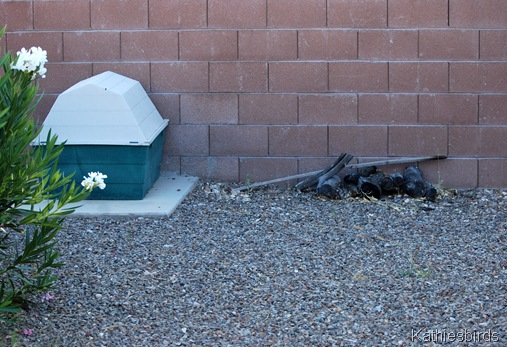 So I decide to go outside and build a set of steps for the quail. While I am out there the mother quail and her chicks run over here and hide behind this dog house. But one chick is not fast enough and even though I am in the backyard a Cooper’s hawk swoops down and grabs a chick before it can hide! The little family of 6 is now reduced to 5; Mamma, Papa, and 3 wee chicks! 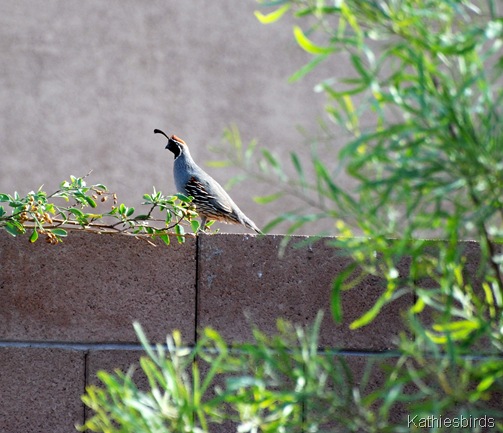 The next day I see papa standing guard on the block wall to alert the family of any danger. This seems to be his job, while mom stays with the chicks. 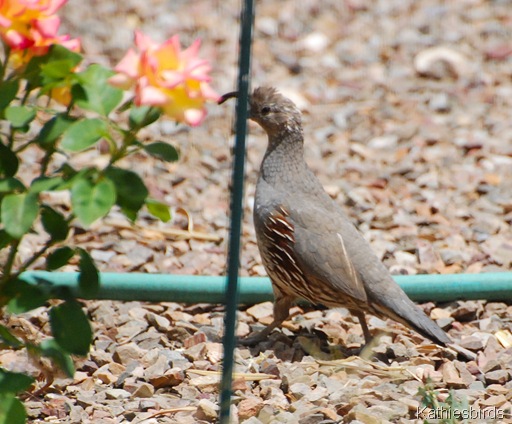 Mom and chicks scuttle past my window while I try to snap a photo. Can you see the baby behind the rose bush? 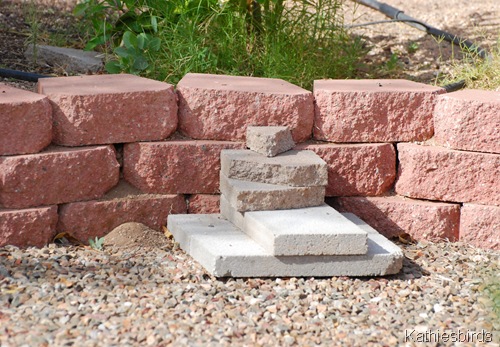 Quail chick staircase I built so they can get back to their nesting site. 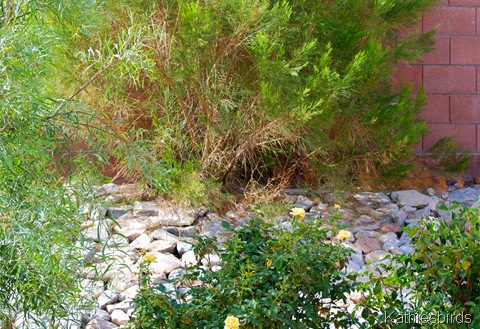 The quail nest under this desert broom. 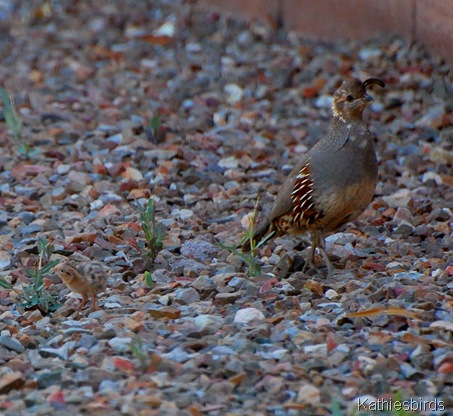 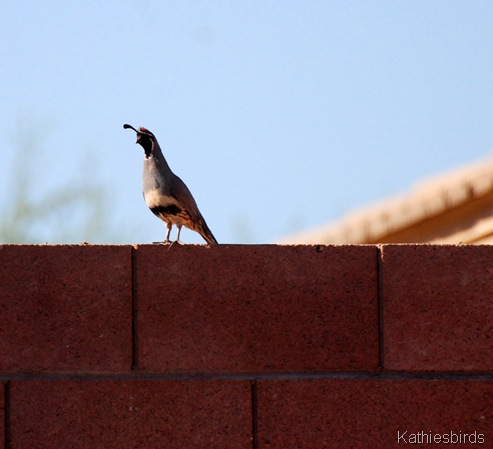 May 29, 2013 Papa standing guard, but he is trying to entice the female away. He knows they must move on. This place is not safe. The Cooper’s Hawk comes back every day. 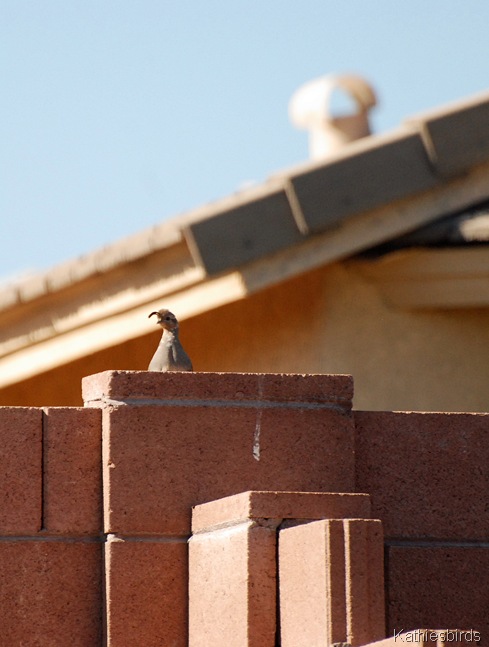 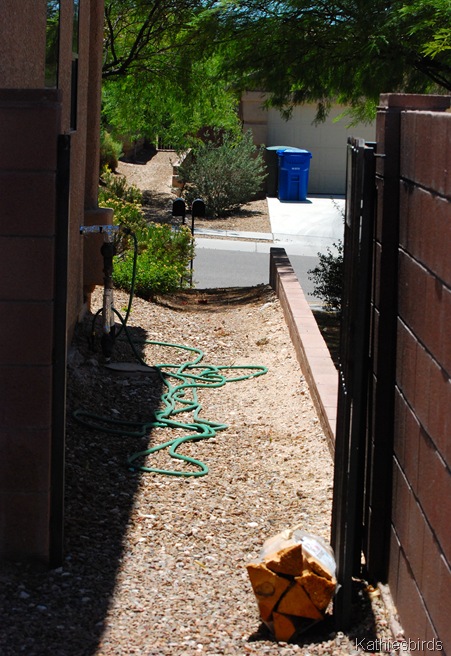 May 30, 2013. I open the gate and leave a trail of bird seed hoping they will follow it to freedom. On this night I go birding in Madera Canyon with Chris Rohrer. It is well after midnight when I return. The next day I do not see the papa standing guard. I do not see any quail. I am happy. I think the quail ran out the door and are living in the desert now. It is a good day. I am happy and relieved. But the next morning I look out my backdoor first thing to count birds. Suddenly i see a tiny little bird darting around under the feeders. It moves faster than sparrows or finches. I know it is the baby quail. I grab my bins. Sure enough, there is the little chick all alone with no parents in sight. They have abandoned it! Now I feel even more responsible for it! I put out food and water for it. That is all I can do. Though it seems heart wrenching for the parents to have abandoned their chick, I think they actually might have saved it by doing so, for I have not seen the Cooper’s Hawk since. 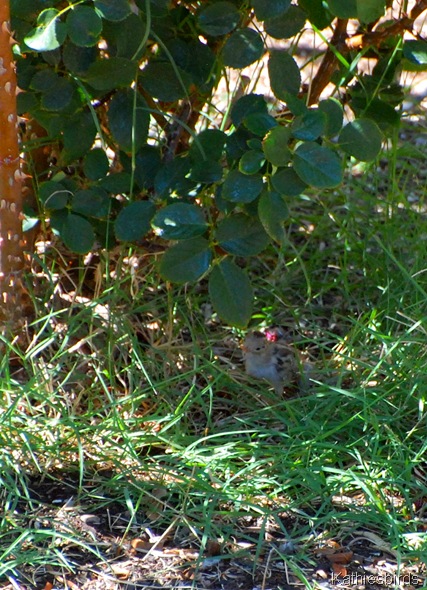 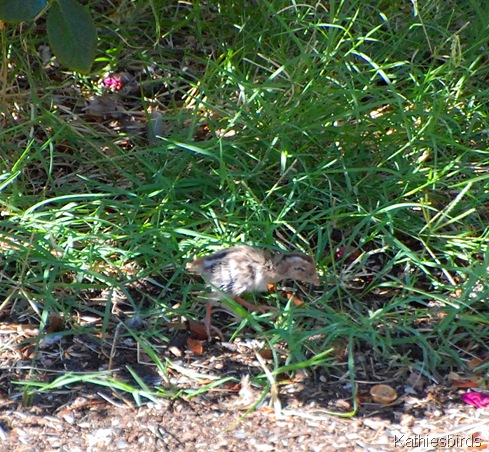 It looks so tiny. How will it survive? 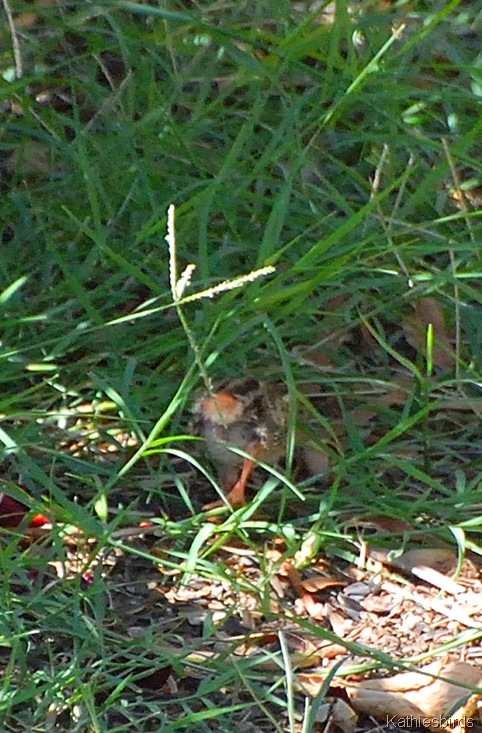 There are so many dangers in this big world for one tiny quail chick.

June 3, 2013 update: I have seen the quail for the past few days now. Sometimes it seems to follow the doves around as if wanting to be part of a flock. Other times I have seen this feisty little chick dart at them with its tiny little beak and drive the doves away from its food! On the evening of June 2nd I saw it trying to get close to a dove and the dove just kept flying a short distance and landing again. Then the quail chick would run up and try to nestled up to its breast. Finally the dove got irritated and flew away. I listened helplessly while the little chick cried piteously and ran around the yard. Eventually it went back to the desert broom to roost for the night. I wished a pair of quail would come back to the yard so the chick could feel like it was part of a covey again. this goes to show how little I know about life in the desert and quail.

The next morning I looked out my balcony doors like I always do. to my utter surprise and delight I saw a pair of quail in the yard. I was ecstatic! things couldn’t be more perfect I thought. I looked out and saw the little ball of fluff running around under the feeders with the other birds. I saw the quail feeding in a different location. then I saw the baby quail run over to where the adult quail were. I could tell they were not the family of this quail because this quail’s momma had some white feather’s on her head and the female of this pair did not. as the little chicks got closer to the quail I suddenly saw the male dart at the chick and stab at it viciously with its beak! then, it picked the baby up and tossed it. I thought he was going to kill the chick! i ran downstairs and out the door fearing I would find a bloody mess. Of course, all the other birds flew away, and I did not find the chick. I filled the birdbath and feeders, then went back inside. In a few minutes I saw the baby chick running around beneath the feeders once again.

By the time you are reading this, I will be on the east coast visiting my family. I will not be there to see what happens to the little chick. Before I left I did buy some seed for my husband to toss out on the ground for the bird. If it lives to adulthood I will be surprised. It seems that everything is against this little guy (or girl) but so far it has managed to beat all the odds. If you would like to read the beginning of this story, just click on the link below. Oh, and I have not seen the cats again since that first day.