Birding with the Brownstone Birder 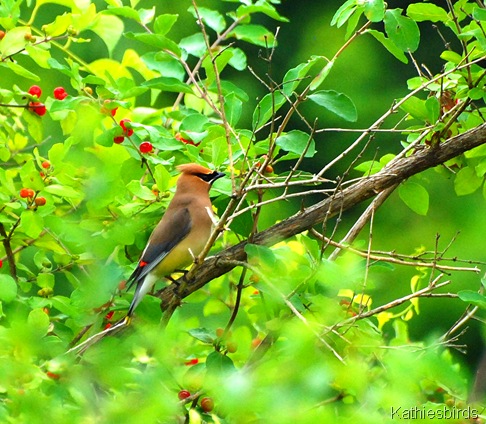 Cedar Waxwing in Portland, CT 6-29-13
On the morning of June 29th I drove to Portland, Connecticut to go birding with Larry of the Brownstone Birding blog. As a blogger I have known Larry since January of 2008. When I lived in Andover, MA I met him in person for the first time at a gathering of the Birders who Blog, Tweet, and Chirp in Wilton, CT. However, this would be my first time going birding with him by myself. I always consider Larry my eBird mentor since he is the one who first turned me on to eBird when I first started blogging. His birding treks around his hometown of Portland are legendary and I was looking forward to seeing some of his favorite spots for myself. I was also hoping to see some of his favorite birds! After a brief stop at the Portland County Fairgrounds, we headed for some power lines on a back road. 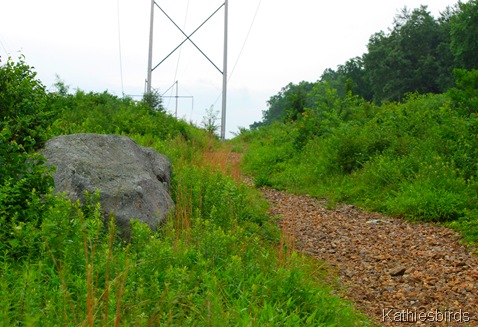 As we headed up the steep trail a small family of Wild Turkeys scurried out of our way! They were too quick for me and my camera! 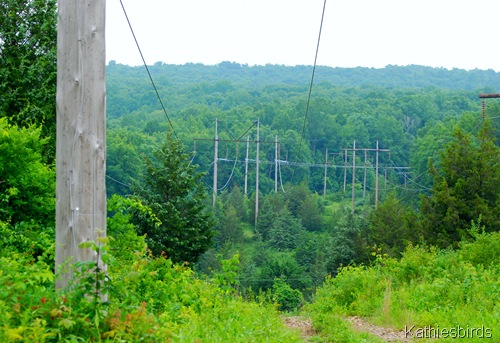 While the heavy gray skies threatened to open on us, we kept walking. 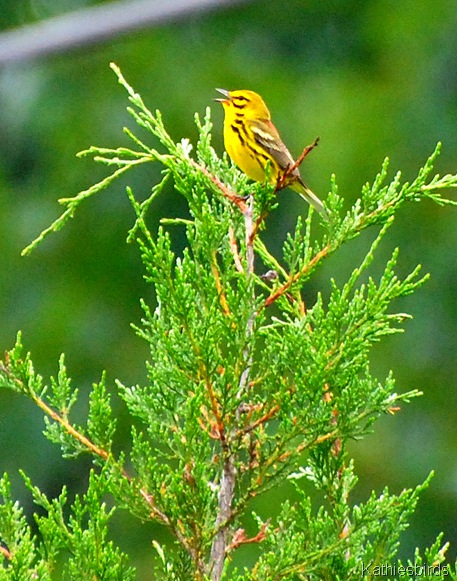 It was worth it when we saw and head this Prairie Warbler sing!
This was a new Connecticut species for me! 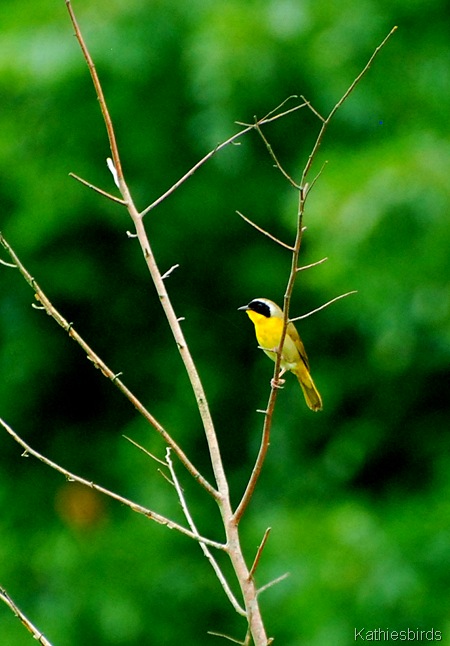 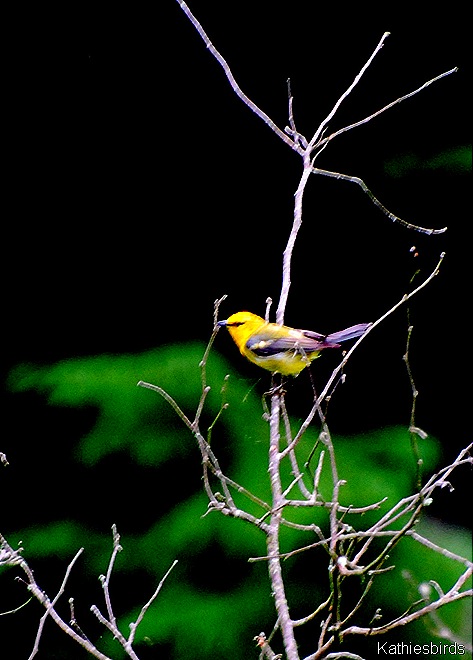 I was only able to get one blurry shot off of a Blue-winged Warbler, yet another new species for my Connecticut Life List! 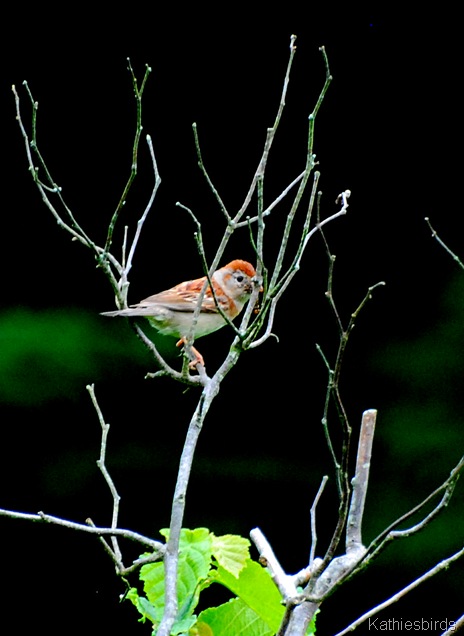 We saw several Field Sparrows. This one has a mouthful of something.
We also saw and heard Blue jays, crows, and a Rose-breasted grosbeak while here. Though we didn’t walk very far, we saw lots of birds. when it started to sprinkle we headed back to the car. After a quick drive we stopped at the Portland Reservoir. 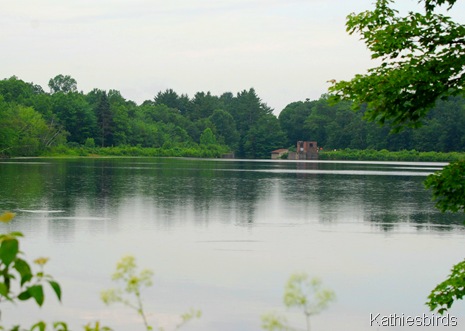 Here the drizzle continued. the temperature was rising and the humidity with it. Still, we ventured on. We followed a trail around the edge of the reservoir with a blog on the left and the reservoir on the right. Tree swallows swooped over the bog. An Eastern Phoebe called from the fence near the water. 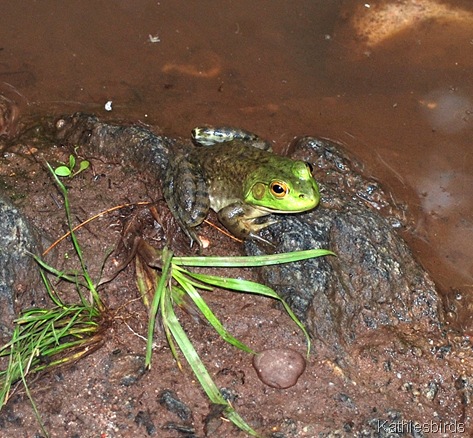 And in weather that was only fit for ducks and frogs, a frog sat in the mud! 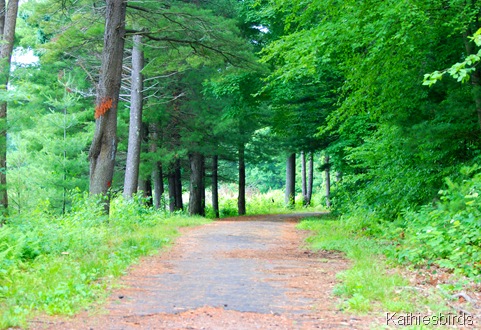 The trail took us through the woods in what I call mosquito alley. After resisting using bug spray, this spot forced Larry and I to give in. There were so many mosquitoes! I’m glad we went because it was down this trail that we heard the least flycatcher, a Life Bird for me. I so wanted to see it but it was hidden high in the leafy tree tops and it never did come down into sight. Even with the bug spray the mosquitoes soon drove us away. 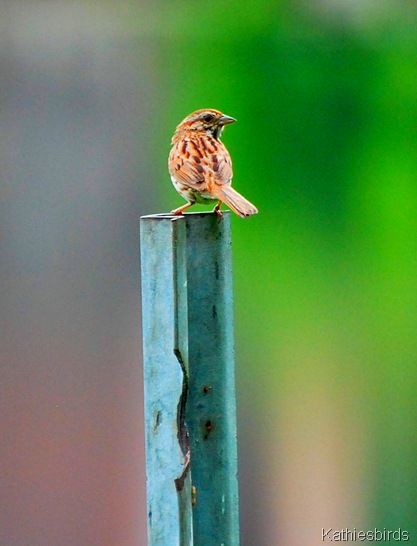 Back out in the open a song sparrow serenaded us from a fence post. 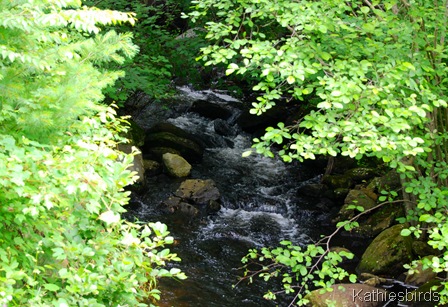 Before leaving the reservoir we took a short walk up another trail where we found American Redstarts in  the trees. 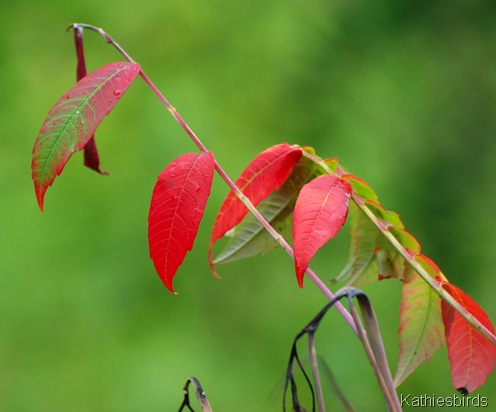 I loved seeing these colored leaves, though it seemed a bit early for them to be changing. I don’t think it was autumn chill that made them change, however. On this warm and muggy day it certainly didn’t feel like it! 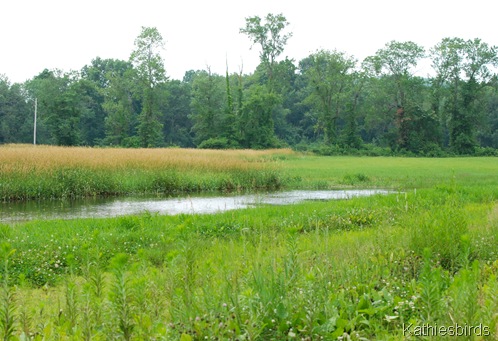 Larry and I knew we didn’t have much time before the weather became unbearable, so we headed back to the flooded fields of the Portland Fairgrounds. This time we tried to walk around the grounds without getting our feet wet! 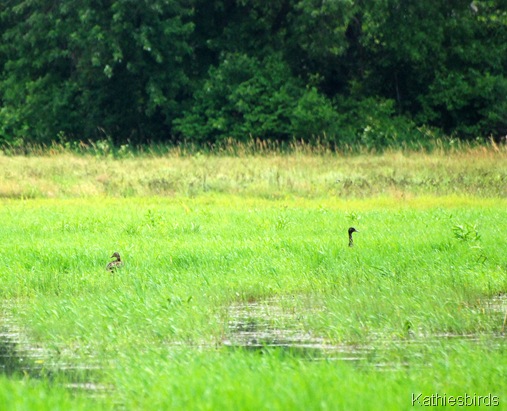 These mallards didn’t have to worry about that! 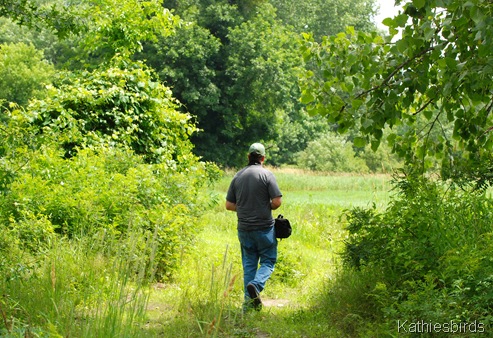 I’m sorry to say that this is the only picture I got of Larry. We were both too busy birding! The Connecticut River flows along one edge of the fairgrounds. Larry led me down a trail to see if we could get in view of the river. We had to dodge several puddles along the way, but finally we made it! 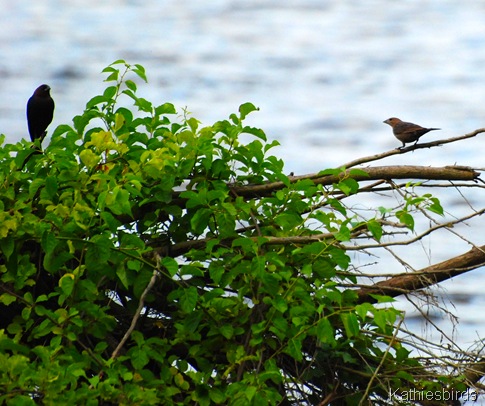 I found these cowbirds in a brush pile along the riverbank. 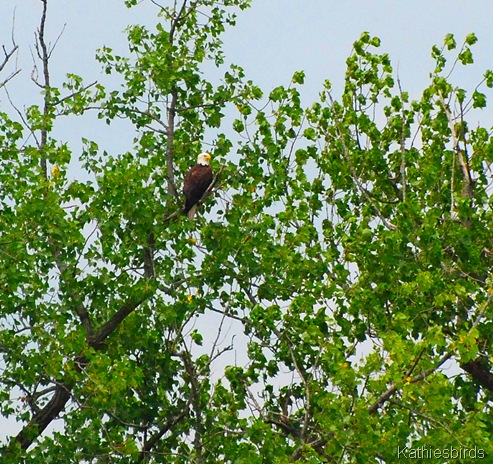 Across the river from the cowbirds I spotted an adult Bald Eagle. A bit lower in the trees we found a juvenile. Larry told me this is a well known nesting sight for them. Larry’s knowledge of the local birds is outstanding and his sense of humor is quirky and fun. As the sun started to break through the overcast the temperature and humidity started to rise and we both knew we were done for the day. I had a great time and I so appreciated his taking the time to show me around. 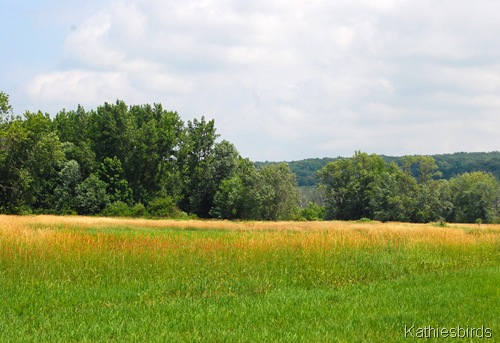 Clearing skies over the Portland Fairgrounds 6-29-13
Thanks Larry!