A Foggy Morning on Mere Point 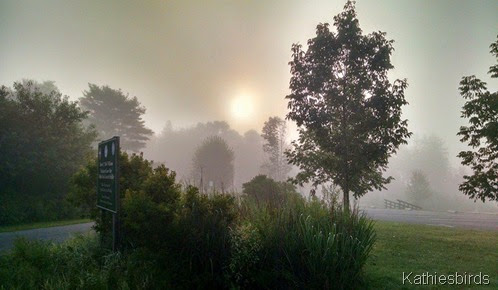 I awoke early this Tuesday morning feeling restless in my soul. After spending most of yesterday inside, I was itching to go out. The windows of my cottage are damp with fog. I have to lean down and look out through the screens to see anything.

The birds are barely starting to arrive as I head out the door at 6:50 AM. A black-capped chickadee calls as I walk across the dew drenched grass towards the boat launch. I usually count birds over there at night, when the sun is setting on Maquoit Bay. It rises here since Mere Point Bay is east of me, and so the sunlight is usually glaring off the water making bird watching in the bay difficult and frustrating. But today I see that I will face a different problem. Instead of glaring sun, my views will be draped in fog. However, I am liking this mysterious feeling as I head down the paved road. 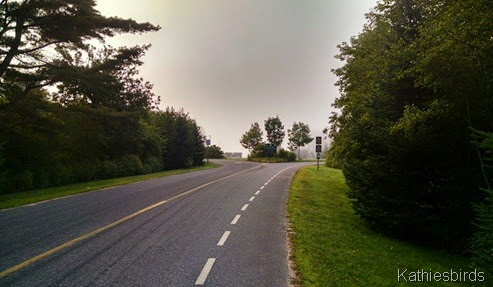 The road to the boat launch is lined with trees and shrubs. In early summer when Chris was here we found nesting Yellow Warblers in these margins. Today these same trees are full of migrating birds! I am seeing all kinds of small birds flitting between the trees. They launch themselves into the air and disappear into the dense foliage. I listen as a Blue-headed Vireo repeats its slow song over and over again, sounding even slower than normal, as if it is a wind-up toy that has run down and about to stop. Fog is obscuring many of the birds, but some fly close enough for identification. I set my cup of tea on the ground and raise my bins to try to see detail. For once I am alone on this road. So often there are others walking or biking by, or trucks roll in pulling boats to launch. But I think today’s fog is delaying the boaters, and only one set of bicyclists have rolled by.

All the cardinals are molting right now, and a scruffy pair flies by me and into the brush. I see a Tufted Titmouse low in nearby tree. Blue Jays are calling and flying overhead. Fog rolls by me in drapes and curtains, lending the morning a dreamy, mysterious feel. Surprisingly there are few mosquitoes, but suddenly I feel something nibbling on my temple. I reached to crush it and find myself stung by some hard-bodied insect that I squish and drop to the ground. I do not know what it was. I am too busy trying to identify the birds moving swiftly through the trees. There is a female redstart in the tree in front of me, and then I see another. My eyes catch some motion and I see a pair of hummingbirds sword fighting with their bills in the air. These two are females as are all the hummingbirds I am seeing lately. The male usually migrate before the females, and it is with sadness I note that in two more weeks all the hummingbirds will be gone for the year! 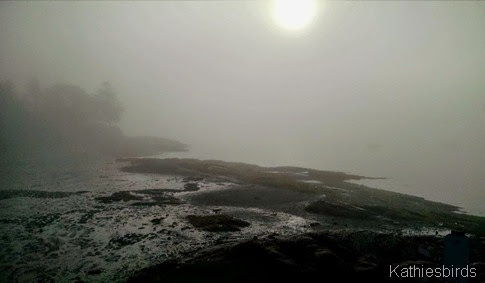 Catbirds are calling from all over the area. I see them in singles and in pairs. I count at least 10 catbirds in the bushes at various areas. As I near the boat launch I look off to the side where there is a private storage area, parking lot and garage. Inside this fenced off area I see a green dumpster. On top of the dumpster is a catbird gobbling up something white. The whole surface of the dumpster is covered with these white things. What are they, I wonder? I train my binoculars on them and focus in. Oh gross! The dumpster is covered with maggots! They are crawling out from inside and over the top and down the sides of the bin! The catbird thinks they are delicious! I turn my head away, too grossed out to take a photo!

By now the fog drenched bay lies before me. I can barely see to the end of the dock! While I can hear gulls calling, I do not see any until one finally flies out of the fog. Then I notice a snake-like head poking out of the bay just at the tip of the dock. A Double-crested Cormorant dives beneath the calm waters, then rises again. Soon it is dunking and splashing in a joyful misty morning bath! After awhile I hear it take to the air, its feet paddling along the surface of the water as it tries to get airborne! 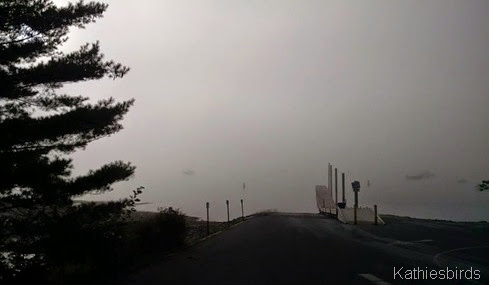 Down in the cove the tide is just starting to slip in again. Out in the misty mud I can just make out the shape of a man bent over with a clam rake, digging for clams. It seems whenever I have been here during low tide this summer that man has been here digging for clams. I do not know if he is local, or if he drives in to dig clams here. He has become a regular figure, just like the Great Blue Herons I am seeing around the cove. I turn my head to see a juvenile hunting the shallow water near the boat ramp. I usually don’t see the herons this close, but I suppose the presence of the clammer has chased it to the opposite side of the dock. The heron does not seem to mind me being here, until I walk a bit farther out on the dock, and though I am not looking at it, I hear its annoyed croak as it takes flight and skims across the end of the dock to hunt in other waters. 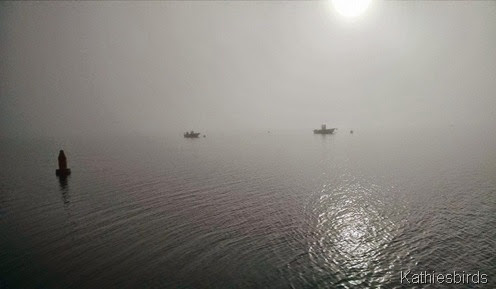 I see the fog before me over the water, with boats like ghosts floating in the sea. I know I will not see any birds out there, but I walk to the end of the dock anyway. I want to be in the fog. I want to immerse myself in this experience! 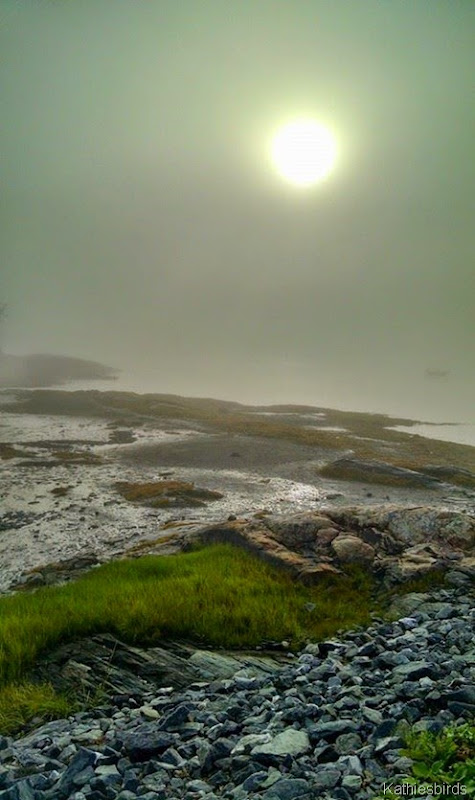 I see the sun like a fireball burning through the gossamer sky. I love the sound of the water lapping at the dock. Little fishes are swimming below nibbling at something on the surface, creating small ripples in their big watery world. I lean over to get a better look at them, but they all dart for safety beneath the shady dock.

After soaking in the view from the end of the dock I head back in towards land. I do not want to think of the coming winter, and the time when this dock will be pulled in and I will not be able to walk out here and look back at land. I know that all too soon those days are coming, as already a few of the maples are tinged with red and orange. Back at my house the euonymus bushes are already turning from green to red.

As I head back uphill to the boat launch road and parking area, I pass by the green dumpster in the fenced in area again. I see that the catbird is gone and there are crows on the bin and the ground. All the maggots are gone as well, picked clean by the birds while I was down on the dock. Birds do so much clean-up for us. We can never measure how useful they are!

After all the activity as I was walking in, I am surprised by how quiet it has gotten as I walk out. The bushes and trees that were so active just 45 minutes ago are now mostly silent. I do not add any new species as I walk home. Bits of blue sky are starting to appear as the sun burns its way through. Soon we will have clear blue skies and heat and humidity, but for now, my last few steps are still through mist and mystery. 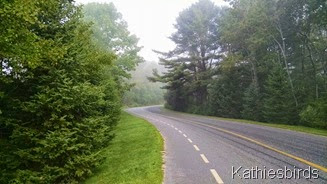 Notes: I walked .3 miles and counted birds for 1 hour. Weather was foggy and calm with a temp of 59F.