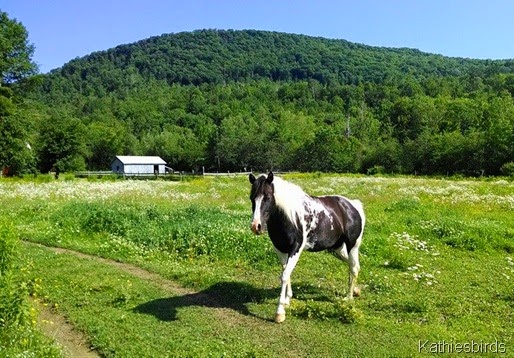 July 2, 2014: We slept in a bit on July first, then did some errands and birded locally, but by July 2nd we were up and out the door on our way to the Rangeley District of Maine. I first fell in love with this area from reading the books by Louise Dickinson Rich. She lived here in the early Twentieth Century and wrote vividly about her life in this area. Her descriptions of the mountains, lakes and towns were so accurate, that I use to read the books with the Maine Gazetteer in my hands and I would look each place up on the map as I read about it! When Gus and I lived in Livermore Falls, Maine for almost two years, I had him drive me to the places she wrote about in her books so I could see them for myself. Thus, I knew from experience that the Rangeley district was beautiful, but what I didn’t know then was how birdy it was! After seeing Chris and Micheal’s reactions to the White Mountains of New Hampshire, I just knew I had to take them to Rangeley. Plus, every birder we met and talked to said we had to bird Boy Scout Road. 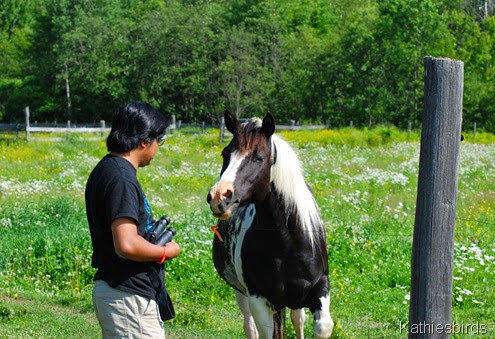 On Wednesday morning we were up early and out the door. We drove up through Turner, Maine and into Mexico, Maine where we turned North on Route 17 towards Rangeley, Maine. We hadn’t gone far before I spotted a pair of Broad-winged hawks riding the thermals over the warming mountain ridges. As of that moment, Chris had not photographed or seen a Broad-winged hawk. With little to no traffic on the road, I pulled over and he jumped out to get his shot. We ended up doing a travel count for the next five miles in which we counted 14 species of birds. Our birding adventure was once again under way! 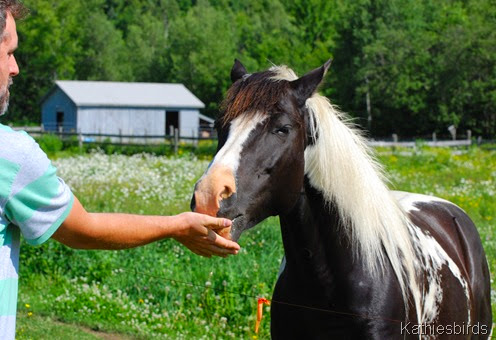 Farther along the road we came upon such a picturesque scene of a horse in a pasture that we had to stop and take pictures. I happen to have an apple in the car for part of our lunch. We all agreed to break the apple up and feed it to this beautiful and friendly horse. I don’t say much about it anymore, but horses are my secret love, and this one was a beauty! Piebald pintos are just about my favorite color of horse! 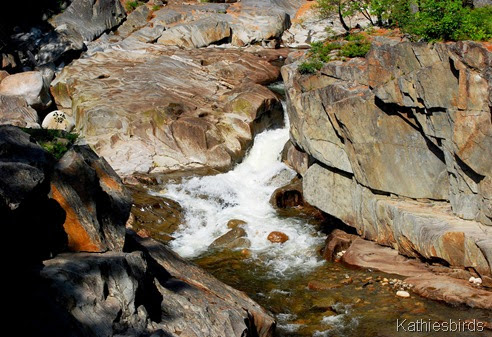 Eventually we got to the Town of Byron where we stopped to take in the views of Coos Canyon. While the scenery was beautiful, we really didn’t see many birds at this location. There are picnic tables and a parking lot, and across the street is a gift shop and store where you can buy or rent supplies to pan for gold in the nearby river. 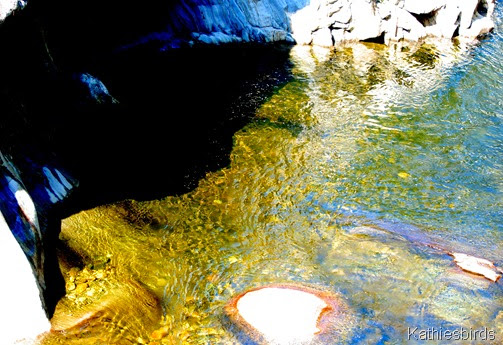 To me, the water itself is liquid gold! 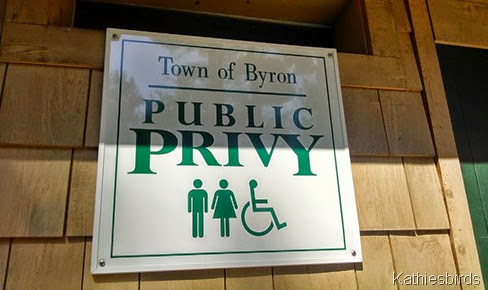 Oh, and they do provide for the necessary conveniences!

On and on we drove, climbing ever upwards to the Rangeley Mountains, until we came to a place called Height of Land; one of the most spectacular views in all of Maine! It is one of the places I read about in Louise Dickenson Rich’s books and it does not disappoint! Chris and Micheal loved this place, and I thought of a friend of mine named Donna, who loves to hike. She wants to hike the Appalachian  Trail, and the trail goes right through here! Come visit me Donna and I will take you here! 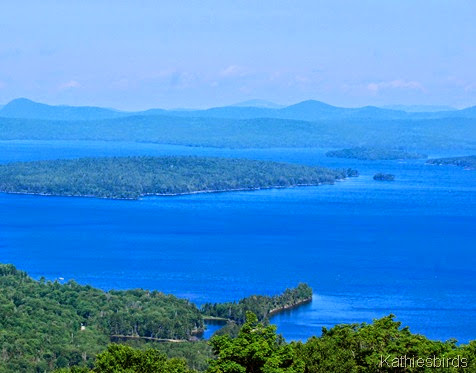 The view from Height of Land 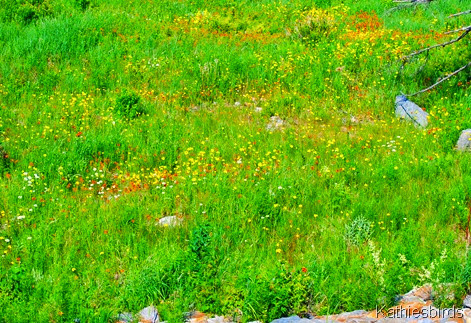 Down the grassy slope the fields were full of wildflowers!

Confetti on the mountainside! 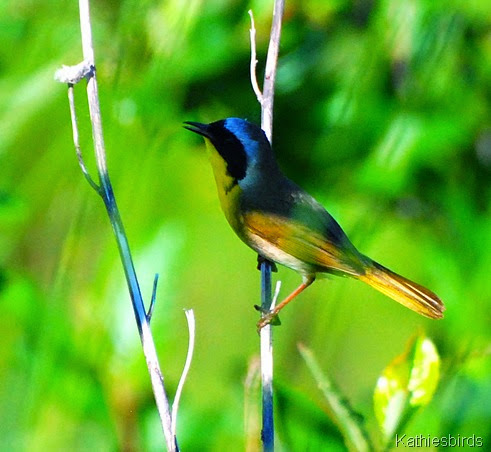 I was surprised to find this Common Yellowthroat singing on the mountainside!

They are usually found near water! 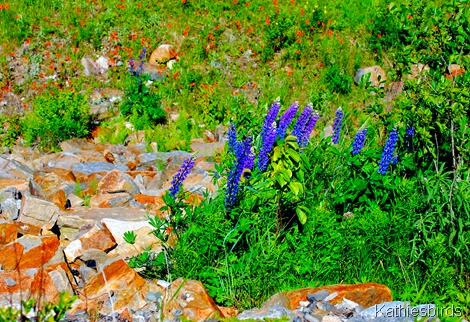 We even found a few lupine still in bloom! 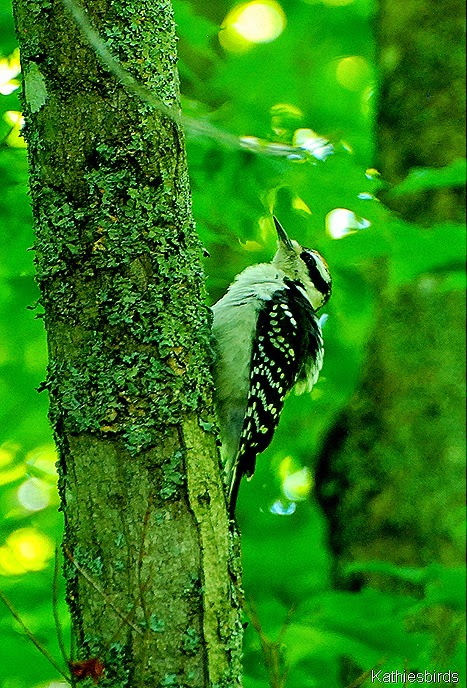 As we travelled farther up the road we stopped at yet another roadside rest area where we hoped we might find a American three-toed woodpecker or a Black-backed woodpecker, but no luck. While I was busy trying to locate this Hairy Woodpecker, Chris was off in a different area where he saw a Ruby-throated hummingbird but I did not. So, I did not get that species on my list, and it would have been my first sighting of a Rubythroat in Franklin County, Maine! 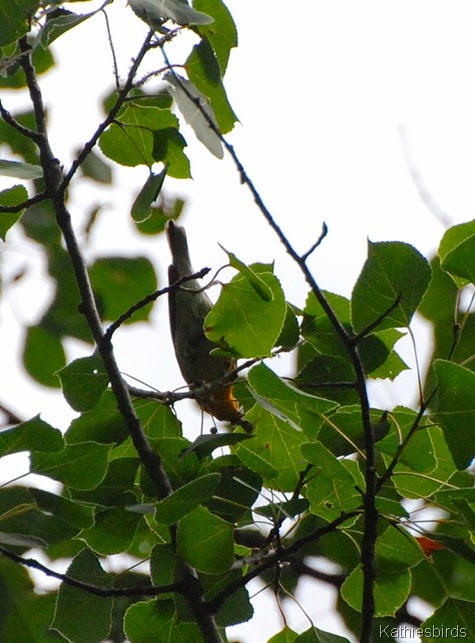 With all of our stops, it was after eleven a.m. by the time we located Boy Scout Road and started birding. With the sun high in the sky the humidity built up and it wasn’t long before we were sticky and uncomfortable. Still, it did no stop us from birding. Boy Scout road is a dirt road that runs along the Kennebago River. You can drive in about 2 miles to where it ends and you have to either turn around, or get out and hike a grassy trail into the woods. We drove the entire thing, stopping numerous time to get out and photograph and identify birds. It was on this road where we started to see some of the warblers Chris came here to get on his Life List. One of the first warblers we spotted was a Blackburnian feeding high in the tree canopy. Still, even in the dense green light you can see the flame orange throat so typical of the male Blackburnian! (photo above) 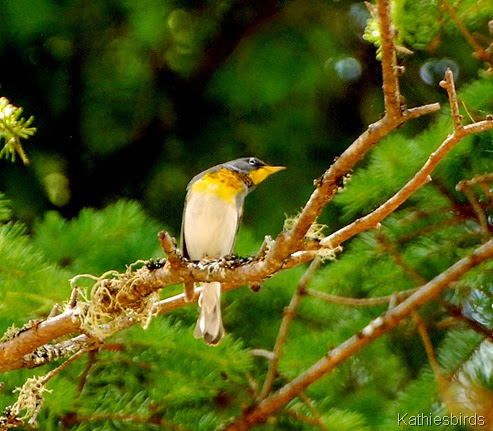 We found a fabulous Northern Parula starting down at us!

Notice how the yellow on the chin bleeds right into the lower part of the beak. This is a good field mark for this species. 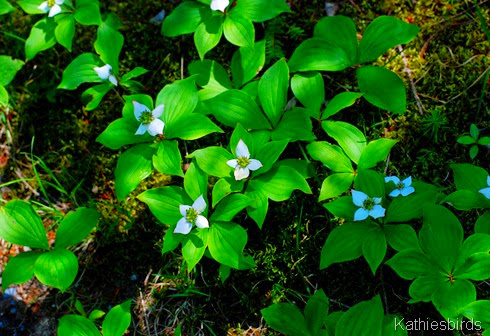 In the woods alongside the road we found a cluster of Bunchberries with their hearts open wide to the sky! But beyond the tree-line the thunderheads built, warning us of coming danger. 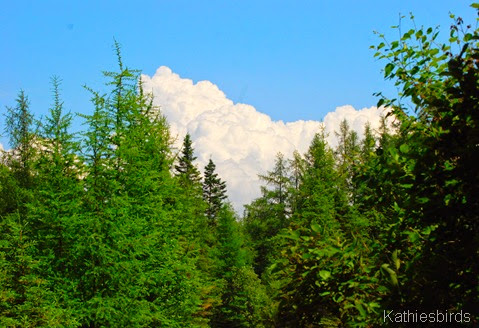 Hunger, heat, and humidity drove us out of the woods and down off the mountains. Instead of driving back down Route 17 through Rumford, I decided to take the boys back through Farmington, Maine. I knew there were restaurants there where we could find a place to eat, and then, if the weather held, we could perhaps drop by my in-law’s house where Chris could hopefully get a photo of a Wood thrush. They currently had a pair feeding out in the open on their lawn! 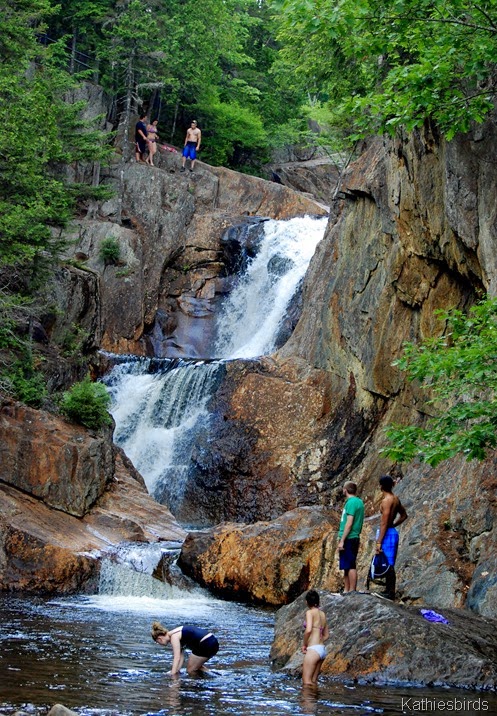 But first was stopped at Smalls Falls along Route 4 above Farmington, ME.

This is a public rest area and local swimming hole with a fun waterfall to see! Though thunder rumbled in the background there were still plenty of swimmers seeking relief from the heat and humidity! there are some people who jump from that upper canyon wall into the upper pool, but we did not see anyone who did it while we were there.

We made it to Farmington and into a restaurant just as the skies opened up and poured down rain! Thunder boomed. Lightening flashed as we ordered our food. the power flickered a few times and threatened to go out, but the wait staff kept on serving us. Outside the window of the booth we sat in we saw a pair of killdeer running on the grassy lawn next to the restaurant! these were our first killdeer since Chris and Micheal arrived! see, even when we are eating, we are still birding! However, the windows were too wet with rain for a photo! 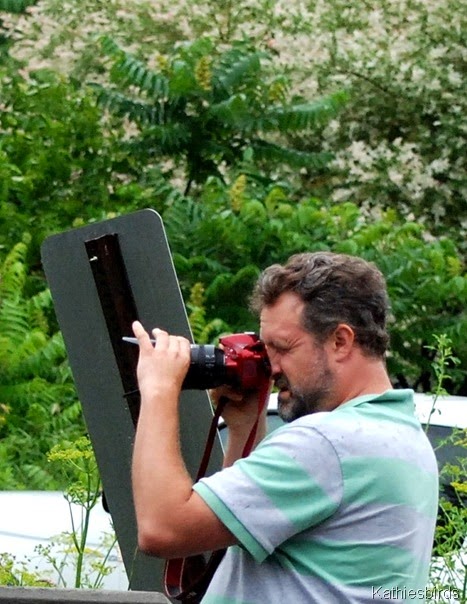 When the rain did not lesson, we knew any further birding was out of the question, so we decided to head for home. We took a different route, which proved to be very scenic as we travelled through a small artsy town called Mount Vernon. A wet porcupine crossed the road in front of us as we drove, then we came into town and Chris just had to get out to photograph an old mill that he fell in love with! 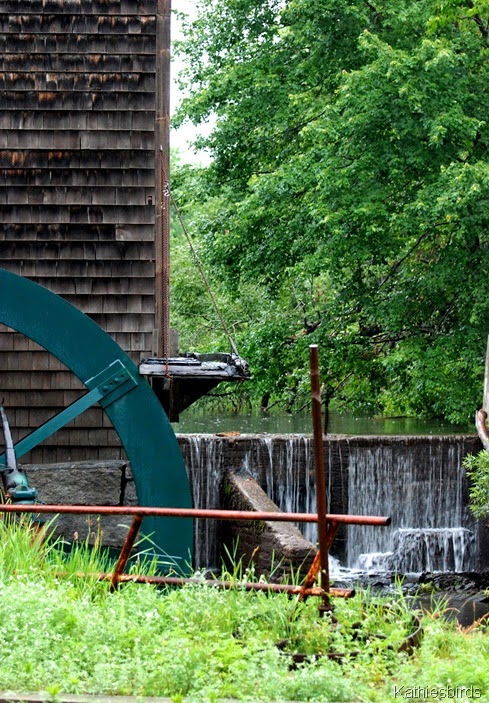 I think I could have gotten Chris to stay in Maine if he could have bought this place!

Later that night, long after we were home, I heard on the late news that there had been power outages and flash flooding in Rumford, Maine, right along the roads we had travelled on that morning! if we had tried to go back that way, we could have been stuck, or even worse, caught in a flash flood! I am so glad that we did decide to go home by another way! In the end we submitted 8 checklists on this day and counted 27 species of birds with 22 of them being seen on Boy Scout Road! 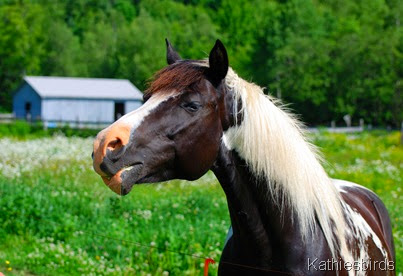