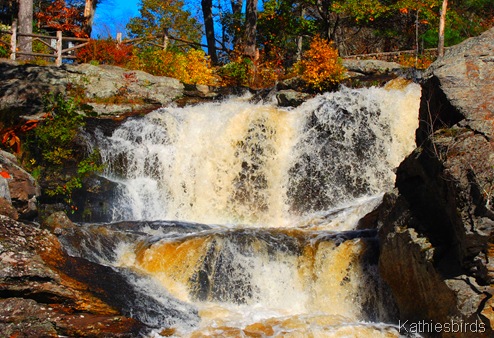 On Thursday morning we drove through fog and rain to Hartford, CT to be with my Mom while she had surgery. After spending the night with my mother we waited for my sister to arrive the next morning, then off we went in search of birds with Mom’s blessing. I drove Kathryn past Lake Hayward and down to Devil’s Hopyard where we stopped at Chapman Falls. the autumn sun shone brightly contrasting perfectly with the blaze of changing foliage. A steady wind blew ruffling leaves and tossing our hair. It kept the birds down, but the scenery was spectacular. 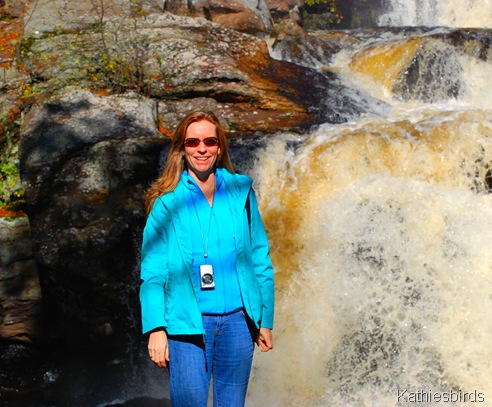 Kathryn in front of the falls. The smile says it all! Due to hurricane Irene last month many of the leaves were torn from the trees and many that were left just turned brown and fell off, but we did find color in a few places. 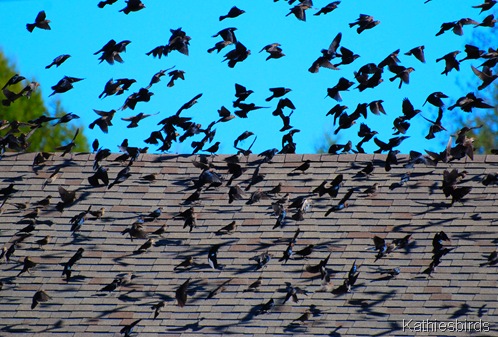 As we drove down Route 156 towards the coast we passed a firehouse in Lyme, CT with the yard and sky full of cowbirds. 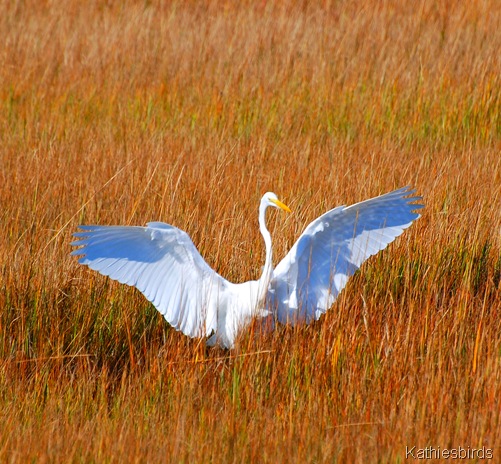 Once at Hammonassett Beach State park we drove to Meig’s Point Nature Center and parked. From there we hiked out through the woods past the marsh where great egrets greeted us like angels. 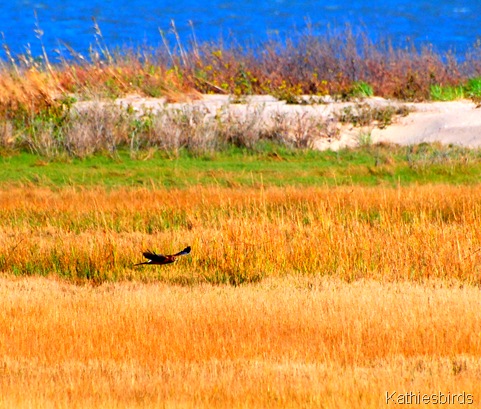 Out over the sunny marsh the Northern Harriers hunted. I still like their old name, Marsh Hawk, which seems so appropriate. 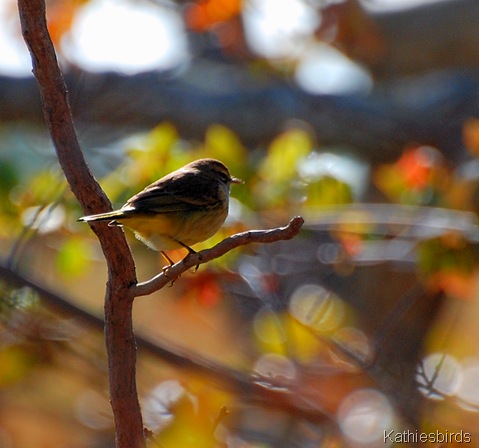 Walking back along the tree-lined trail a Palm Warbler popped up on a twig. 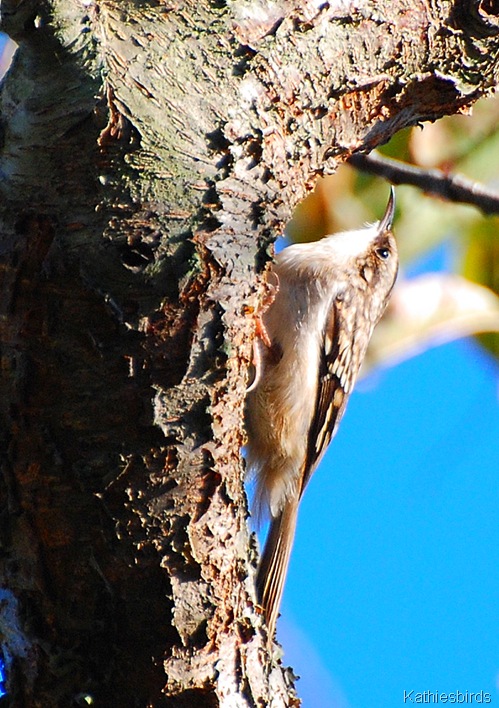 We took the trail to Willard’s Island and found a Brown Creeper climbing a tree. 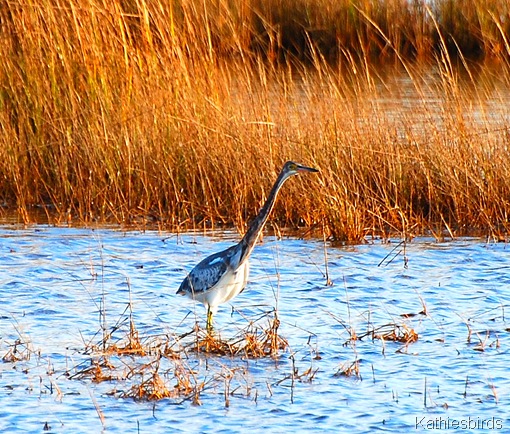 Tri-colored heron in the pond by Meig’s Point

After our little adventure out on the island where we saw yellow-rumped warblers, the brown creeper, and numerous chickadees we headed for Meig’s Point proper. there in the pond by the parking area a Tri-colored heron hunted. 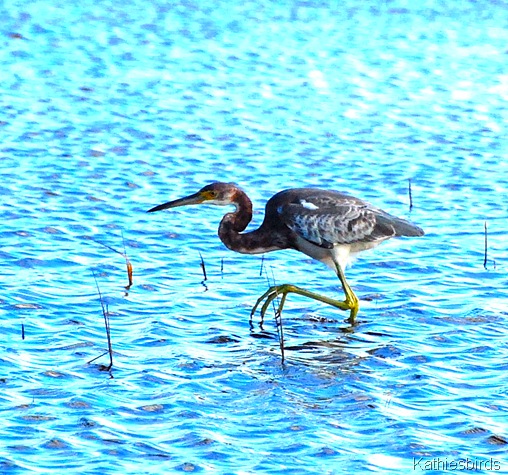 Just look at those feet! 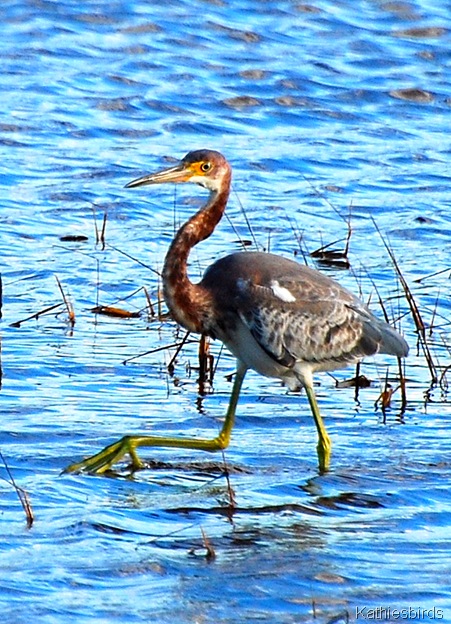 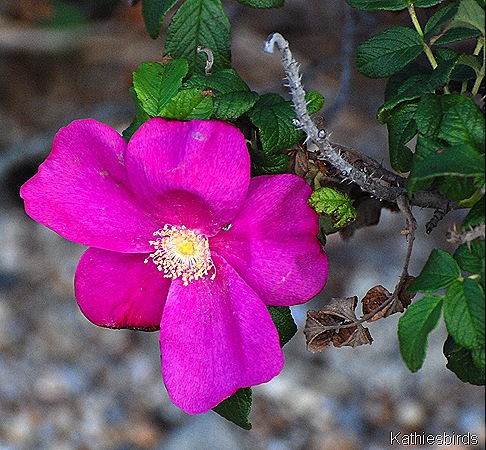 We walked along the ocean trail dotted with sea roses, trying to get close enough to the sandbars where we had seen peeps from a distance at the viewing platform in the woods. As we emerged onto the sandbar we were stopped by a sign which forbade passage any farther along the trail due to it being sensitive nature habitat. We were a bit discouraged but, as we turned back a flock of dark geese came flying low across the water. A look through the binoculars got me excited for I knew Kathryn was about to get her first ever look at Brant! It all happened so quickly that I didn’t even have time to take a photo! 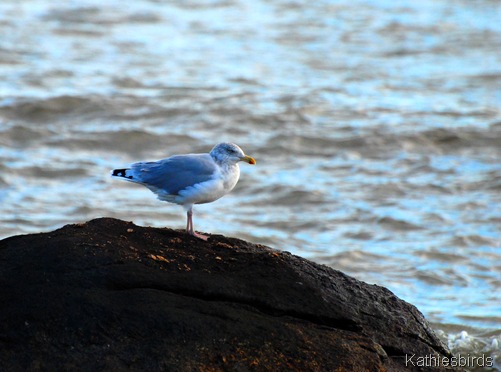 Herring gull on a rock at the ocean’s edge. 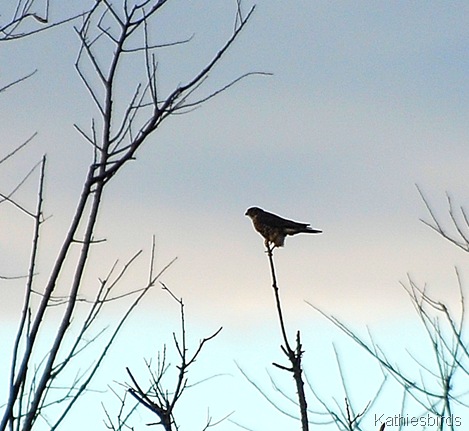 Merlin in the sky

As we neared the parking lot again a small and swift raptor flew by and landed in a distant tree. We tried to view it through the scope and with our bins and I took a few photos in the poor lighting but from what we saw and observed I believe it was a Merlin. The bird seemed to have a black and white barred tail and the dark mustache of a Merlin. It was quite small, though from this photo it does not look that way. 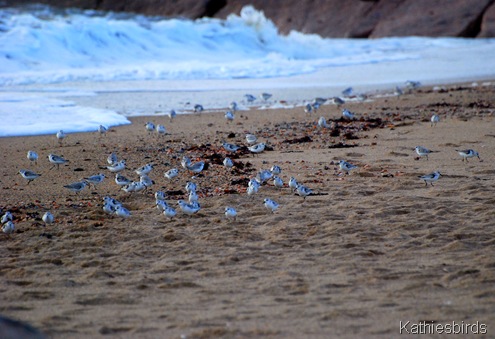 Sanderlings on the beach.

We headed for the open ocean next where the beach faces Long Island Sound. There I paused when I saw a flock of peeps mixed in with some seagulls. At the far edge of the flock I spotted two ruddy turnstones. I pointed them out to Kathryn, then tried to get a bit closer for a better shot. 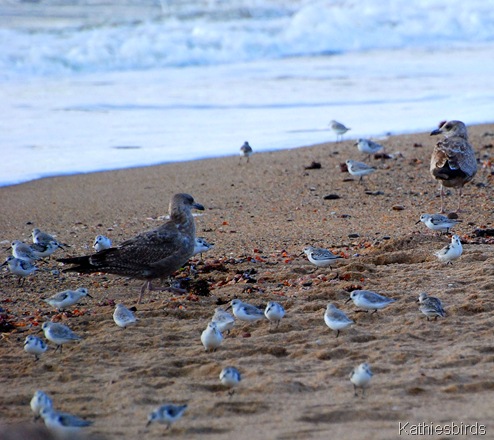 As I did, a woman and her child came rushing past me saying, Oh, I can get them closer for you!” As they charged forward the whole flock took flight. they started tossing bread crumbs or crackers to the seagulls who gathered around them noisily. And while the sanderlings landed again on the beach, the turnstones were no longer to be seen. Some people are just too helpful! As I scanned the gulls along the sand I was delighted to find a few laughing gulls in the mix. I pointed them out to Kathryn and she recorded yet another Life Bird. Though the black hood of summer has faded, you can still see the bit of red in the beak of this bird in its winter plumage. 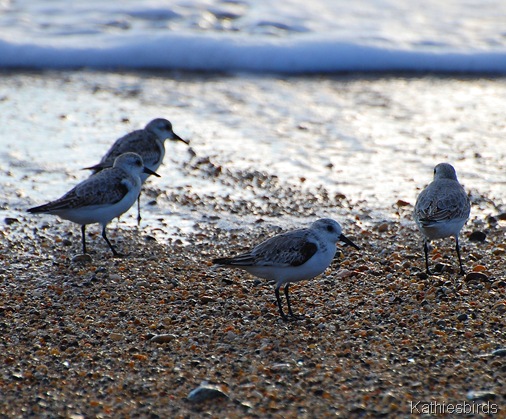 As the sun dipped low in the western sky Kathryn and I packed up our gear and headed home. We contemplated taking the drive all the way up I-95 just so she could say she had been in Rhode Island, but decided against it as it was already getting dark and we were quite tired and ready to be home. Still, in less then 3 days Kathryn had already been in three of the six New England States! 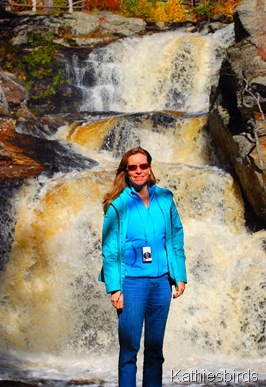