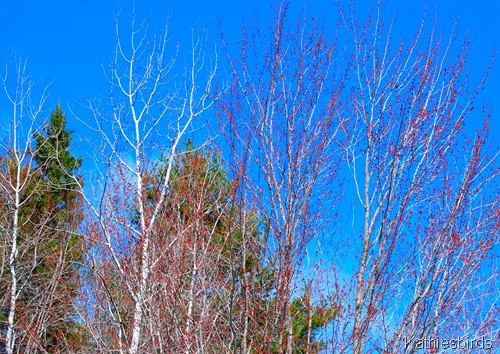 On the last day of March Gus and I drove to Maine to visit his family once again. Ever since we moved back here over a year and a half ago Gus has been up to see them at least once a month. During February he went up without me as I was a bit tired from all my trips to Connecticut. He had not been there yet in March and in order for him to keep his record going he had to go today. So we set off early on Saturday and arrived at his parents house by 10:30 AM after a 3 hour ride.  As Gus was parking the car I looked out to see my first bird of the day, a Common Raven sitting in a tree in the yard. After we went in the house to greet the family and have some coffee we realized there was a pair of them out there when we saw 2 ravens through the window. 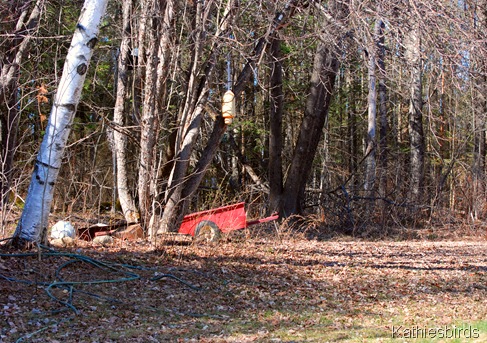 After chatting with the family for awhile I soon took my binoculars outside to walk around the yard trying to find some birds. I heard and saw chickadees. The calls of Blue Jays rang through the forest while overhead a Turkey Vulture drifted by wings bent into the thermals. I did 3 separate bird counts here throughout the day for eBird and counted a total of 8 species at this location on this day. 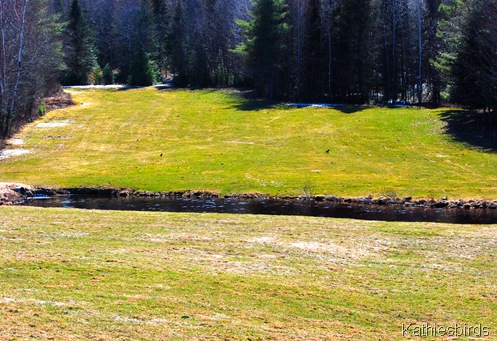 Later in the afternoon my sister-in-law and I went for a drive to try to find more birds. I had seen several bird species on the map in the eBird View and Explore Data tab located on a road called Winding Hill Road in Norridgewock but had never driven on it myself. Rita and I decided to be adventurous and so we turned down the sunny winding road and into the countryside. As we came down a long hill I spotted a pond below me with green fields beyond. Since no one was coming I stopped the car on my side of the road and rolled down my window to indentify the ducks I was seeing in the pond. 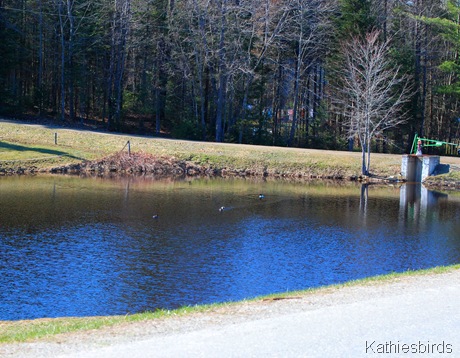 I found a pair of Common Mergansers and a pair of Mallards enjoying this sunny day! I gave my extra pair of binoculars to Rita so she could see the birds also. But then I saw a flash of wings across the street from the pond. 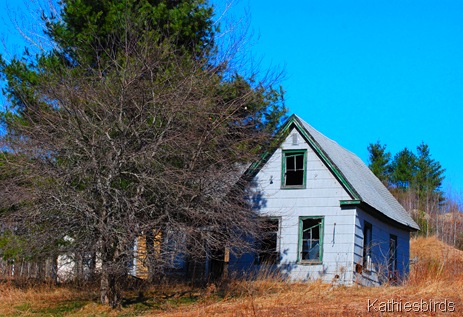 I turned to see this abandoned house. If you look closely at the photo you can see a whitish speck in the corner of the fruit tree on the right-hand side near the house. 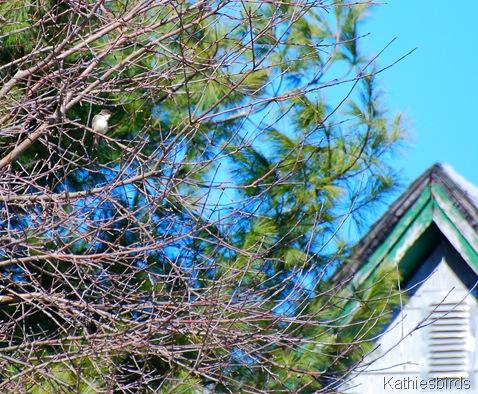 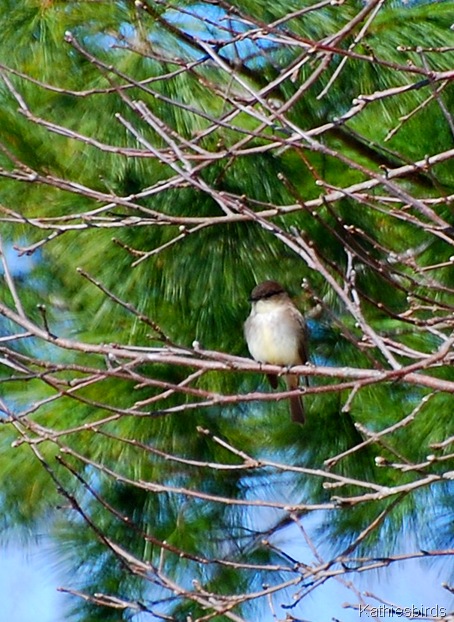 And an even closer look revels its mate!

When I entered this bird count into eBird it asked me to confirm that I saw the phoebe. I checked the box to confirm, then pulled up the bar charts for Somerset County after I had entered my data to see when the earliest sighting of this species was for this area of the state. While Eastern Phoebes are being seen farther south and east in Maine right now, the appearance of phoebes at this location is 2 weeks ahead of any other recorded sightings! I had no idea when I saw these birds that it would be anything special! We continued our drive along Winding Hill Road which I soon discovered is aptly named. After awhile the road leveled off and turned to dirt where it entered a deeply wooded section of land. Now dark shadows fell across the road and Rita and I were stating to wonder what we had gotten ourselves into. However, the road was wide and the surface was firm, so we continued until the road took a sharp turn to the left and we found ourselves in sunshine and on pavement once again. I ended my bird count for winding river road and started a new one for this transect. I reset my trip-ometer on my car so it would measure the distance we would travel since that is part of the “Effort Based” information eBird requires. 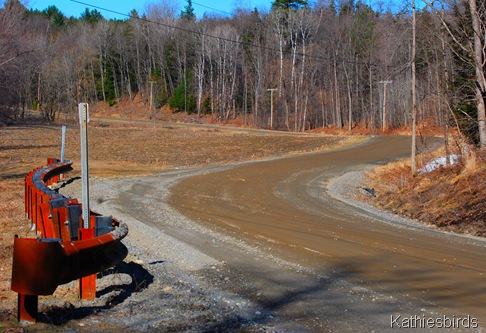 We were now on Sandy River Road near a dairy farm and as we traveled along I kept my eyes open for birds. Then, to our utter surprise, the pavement ended abruptly and we were on a gravel road once again. Oh, but the scenery was spectacular! The Sandy River wound down through the fields below us. Pasture land spread out on both sides of the river. In some areas it was flooded and I could just imagine the shorebirds that might show up here during migration! 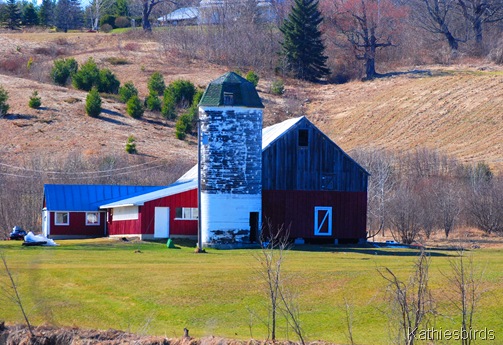 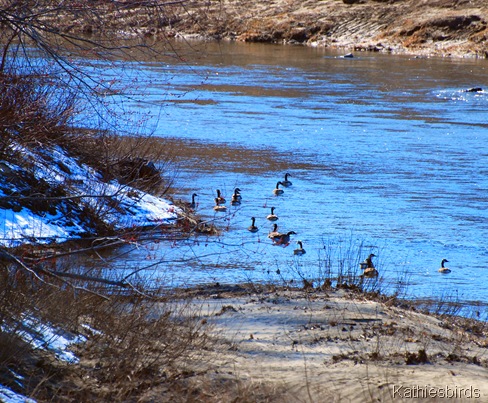 And down in the river we found some Canada Geese!

Now, in some places Canada Geese would not be such a find, but for me they are a rare find around Norridgewock! Rita really enjoyed them also and it was great to add them to my bird count for the day! We had pulled off the road here by the river but now we continued on our way west. The bad thing was that the sun was right in front of us making it difficult to get good photos or get good lighting on some of the birds. As we neared the junction of Child Road I saw a bird sitting on the utility wires ahead. I stopped the car and tried to identify its silhouette. It was bigger than a finch, but smaller than a dove. I moved the car slowly forward and stopped again. This time I got enough light on it to see the blue head and red breast of an Eastern Bluebird! This was a first sighting of this species in Maine for me. I was so excited! However, as I tried to creep even closer to get a photo the bird flew across the street and through some trees towards the pasture. I turned my car around to get the sun behind me and see if I could see any other bird species and located a Pine Siskin singing in a nearby tree. It, too, flew off when it realized I was looking at it! 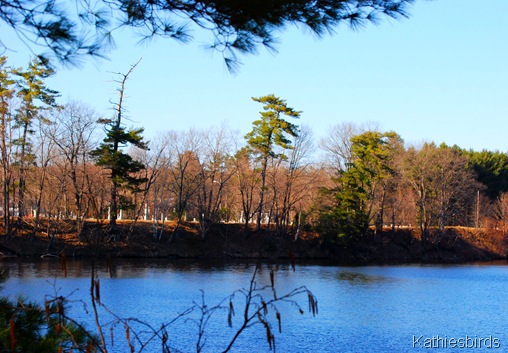 We had been gone for over and hour by now so, though there was more of Sandy River road to explore we turned onto Child Road and headed back towards town. Before returning home we stopped at Oosoola Park where I often see Bald Eagles on the top of a partially bald pine tree across the Kennebec River. Today there were none. In fact, the only birds I saw in this location were a robin and a crow. It was getting cold, so we headed home where we found more robins in the yard.

It has been weeks since I have been to Maine to visit family or count birds. I made up for it today and ended up with a count of 24 species for the whole state, since I did count birds when we stopped in Yarmouth on our way up, and right before we got off the highway I spotted a Red-tailed hawk sitting in a tree alongside Route 95 in Waterville. I entered the hawk into eBird as an Incidental Observation (Formerly called a Casual Observation.) 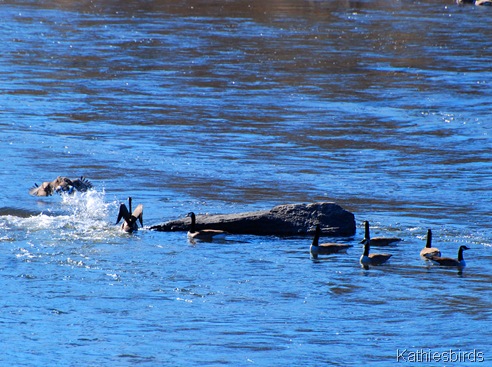 Canada Geese on the Sandy River in Norridgewock, ME