In the Dark of the Night in the Imperial Valley 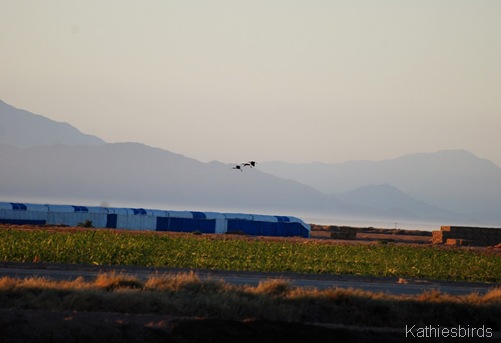 Gus and I sit at a crossroads in his black Camaro convertible in the Imperial Valley of California. The golden light that bathed the landscape only moments before has faded to lavender and rose before the purple and gray of twilight enveloped us completely. After striking out on reaching the southern edge of the Salton Sea in our efforts to see birds, we drive west towards the main highway staying on the paved road now. There is an eerie gray light surrounding us as we reach the T intersection. South is towards the hotel, north goes up the west side of the sea. I can see on my Smartphone’s GPS that there is a small town a bit farther up the west side called Salton City. It is Thanksgiving Night and we are in a very strange and unfamiliar place, but what else are we going to do? Head back to a dingy motel and watch TV? So, I make a proposal. What if we take a drive up the west side to that town? It looks like it goes down to the sea. Maybe we can find a beach there and scope it out for the morning? In my mind I am thinking of places like Gloucester, MA, or Mystic, CT, where one can get near the water even at night and watch starlight dance on the surface and hear the gentle lapping of water against the bows of boats. I imagine docks and piers and street lights glowing and reflecting in the water. We still have the top down and the night is young, so we crank up the heat and head north.

As the cool gray air hits us in the face I wrap my sweater more tightly around me. I tend to dress in layers and already have a tank top and a lightweight sweater on, but with the darkness the temperature is dropping like a rock. Add in the wind chill and you know my arms are getting a bit cold. I have yet another long-sleeved cotton shirt I can put on but I am afraid to undo my seat belt and try to put it on in this wind. I am afraid the wind will catch it and it will just go flying. So I wait for a stop light or something and then I will seize the opportunity. Meanwhile, I am trying to pierce the gloaming with my eyes and see what kind of environment I am in out here in this desolate place!

We’ve been driving for about 15 minutes just laughing and talking and having a good time when we see signs that tell us the road narrows to one lane ahead. Gus slows the car and I am thinking this might be the chance to put my shirt on over my sweater when we realize that this is a border patrol checkpoint. I had no idea we would run into one up here. Gus and I look at each other and realize how foolish we look. He we are in the middle of the Imperial Valley, two over 50 adults in a black convertible on Thanksgiving night in the dark, driving with the top down. As we roll slowly towards the Border Patrol agent we wonder what he is going to say to us. We have out of state plates after all. We roll to a stop. The agent standing there has a gun in his belt and a stern look in his eye. He looks us and the car over briefly with the eyes of experience and asks, “Aren’t you guys cold?” We crack up laughing and say yes, but we are having fun! I tell him I was just about to put on my long-sleeved shirt. He waves us through and I quickly put the shirt on before Gus guns the car and we are back up to speed!

We are nearing Salton City now. Route 78 split off from 86 a few miles back and headed west towards Anza-Borrego State Park while Route 86 heads north through the city. I have no idea what to expect from this “city” I am thinking maybe a few stores and restaurants, but really, all I want to see is the sea. As we near the first traffic light on the highway I see that the road to our right is called South Marina Drive. Marina Drive? It must lead to a marina then, and if there is a marina, there must be water and docks and piers, right? And…perhaps some birds! Even at night! “Turn here, I exclaim!” Gus makes the turn and we drive slowly down the street towards the sea. We are being very careful to obey the speed limit as we drive. The night air is cool and we have the heat cranking. Gus rolled up the windows to cut the wind, but we still have a full view of the night sky and the surrounding landscape as we drive. The road is heading downhill, dropping in elevation as we go. I am looking around me and alternately consulting the Smartphone map as I go. It is all looking good so far. I reason that heading downhill is very good since the Salton Sea is 226 feet below sea level, so we have to go down to get to it. But, suddenly the road levels out and is curving to the north and we are travelling parallel to the shore. Yet I do not see any water, only small and sometimes dilapidated houses. “Wait, Gus! “Pull over I cry! We are heading the wrong way now. I want to get to the sea!”

Gus finds a safe place to pull off the road as I look down at the map in my hand. I am studying it diligently when Gus says, “Utt- oh.”

Now, unbeknownst to me, Gus has been watching this car in his rearview mirror as he has been driving. He tells me that whenever he slowed down, the car slowed down. Whenever he speeded up, the car speeded up. He was hoping that when he pulled over the car would go past, but instead it pulled in behind us. “Well, we aren’t doing anything wrong,” I say. We’ll just explain what we are doing. And perhaps the police officer knows where we can get to the sea,” I propose optimistically!

The officer walks up beside us cautiously. He is dressed in his official uniform and very polite. He is a young Hispanic male. Gus is preparing for the officer to ask for his driver’s license. I am preparing to ask him where the beach is! After a few preliminary questions I tell him that we are bird watchers. He shines his light in the back seat and sees the scope, the bins and the camera. Then he relaxes. I tell him that we are here visiting from Arizona and we are trying to get to the edge of the sea. Does he know where we can do that? I explain that since this said it was South Marina Drive I thought it would take us there. He says, no. He does not know where we can get near the water! He says there are no public access points in the city that he knows of! Then, he asks Gus what kind of car this is and they are off and running!

You see, Gus has removed all the identifying emblems from his car. He took off the Chevrolet “bow ties” from the front and back and removed the chrome lettering from the sides with the vehicle’s name on it. Then, he bought black rims for his black car. In talking to a woman we met on our way to Renee’s wedding in Colorado earlier this month we learned that Gus was “murdering out” his car! Who knew! Now he is engaged in a lively conversation about cars with a young police officer in Salton City, CA in the dark of the night on Thanksgiving Day! Perhaps we are in the real “Twilight Zone,” for my husband has become a young man again showing off his car to another young man, erasing all boundaries of time, age, or race. I am glad they are having such a good time but I am a bit frustrated. We are so close to that sea but still so far away!

Finally we say good-bye and get back on the road. I can see from the GPS that this road we are on does a big horse shoe through the place. After heading east towards the sea it turns north and then west where it becomes North Marina Drive. It leads you back out to route 86. When we get there we turn south back towards Westmoreland and Brawley, where our motel is located. We never did find a marina! The night air is cool. The night sky is dark with a moon like the Cheshire Cat’s smile shining down brightly at us as we drive all the way back with the top down and the heater cranking! Perhaps in the morning we will finally get to the sea and see some birds!