In Search of the Salton Sea 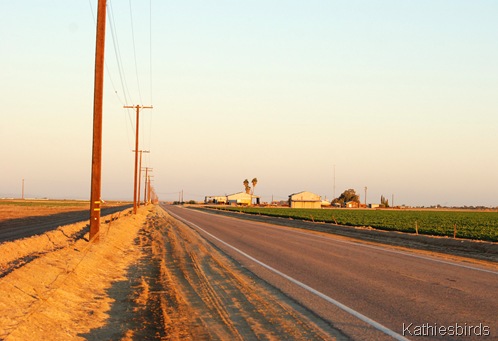 It is late on Thanksgiving Day when Gus and I step out of our hotel in Brawley, CA.
We are on an adventure to the Salton Sea and after a bland turkey dinner in a local hotel we went back to our room to rest. Gus fell asleep while I read through my camera's manual trying to learn what I could to improve my photography skills. I have been very frustrated with my photos lately.  When we go out our hotel door I am shocked to see the sun sinking low and blackbirds gathering in the trees. When the blackbirds gather you know that sunset is not far behind!  Knowing that time is short, we head northwest past Westmoreland and towards the Sonny Bono Salton Sea National Wildlife Refuge. I could see on my GSP map that it is at the north end of Vendel road, so we turn right and stop short. There is no signage here and the road is dirt. This is a problem because we are driving in Gus' new all black Camaro convertible. He bought the convertible when we moved back to Arizona this year. My part of that deal is that he gets to drive me to new birding locations! Plus, he also bought me a new spotting scope which we are both eager to try out on this trip! In fact, we waited for the arrival of the scope before we could leave. When it finally arrived on Wednesday we booked our hotels, packed our bags and were out the door and on our way! Now here we are trying to get to the Salton Sea and unsure of how to get there! 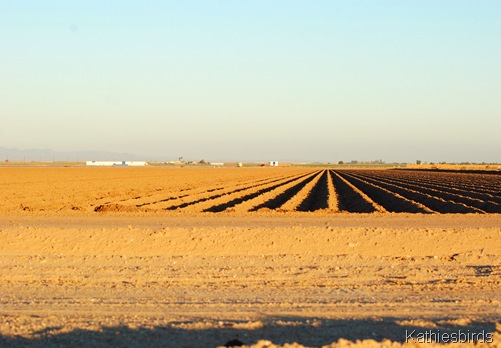 Gus really wants me to have a good time, so he reluctantly starts to head north on the washboard road. The car bumps along slowly as we try to raise as little dust as possible. Of course we have the top down! It sure makes it easy to see birds this way! Around us the low light of the sinking sun is casting a golden glow over the agricultural fields we are driving past. The harrowed rows are casting deep shadows creating interesting patterns as we drive by. The whole world seems like a golden place full of promise. 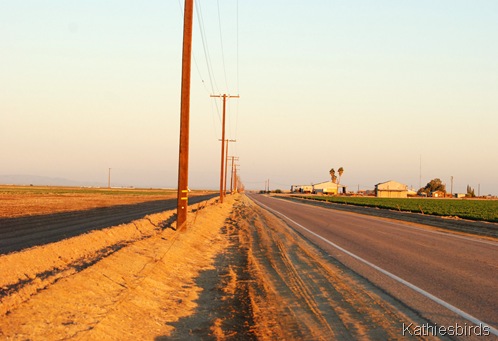 When we get to a paved crossroad called Bannister Road Gus turns east not wanting to proceed any further on the dirt road. We have seen no signage for the Wildlife Refuge and I am starting to wonder if it is one of those “Off Limits” bird areas where only the birds and the wildlife biologists are allowed. As we head east on Bannister Road I am consulting my Google maps again to find a way to the sea. Part of the problem has been that when I put in a search for directions to the Wildlife Refuge it comes back with results that say, "route not found." So, I am having to figure this out by myself! I am thinking I should have done more research before but it looks so easy and so accessible on the map!

As we are driving east and I am looking down at my dumb smart phone Gus slows the car and says, did you see that bird? I look up to see a kestrel on the wires. I explain what we are looking at. He says no, that one. Then he points out the larger bird on the cross bar of a utility pole! When the kestrel starts to attack the huge raptor it takes off and flies west. Gus then puts the car in reverse and backs up to the spot where the bird has landed again. However, the kestrel has followed as well and the raptor is being dive-bombed by the kestrel once again. Apparently it does not like the kestrel or me looking at it, so it takes off and flies straight into the sun and is lost to my view. It was so large that I think it is an eagle, but I am unsure. It's markings make me think it is a juvenile golden or bald eagle since there was splotchy white in its wings. 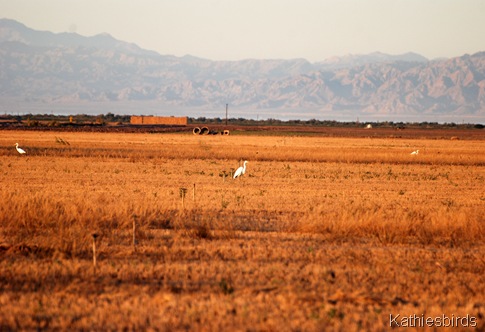 With the eagle gone I now glance around me at the agricultural fields to the north. At first my eye is drawn to the 10 Great white egrets in the field which stand out like white sails against the dark green crops, but then, as I look through my bins I am astonished to see curlews! 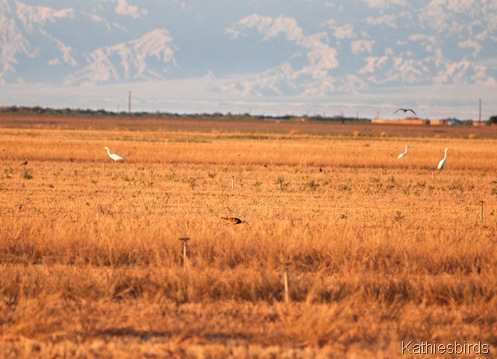 I haven't seen a curlew in years, but here they are with long curved bills as long as their long legs, searching in the grasses for something to eat. I start to count, 1, 2, 3...up to 10 birds! Ten curlews! I have never seen more than one or two at a time, yet here are ten! 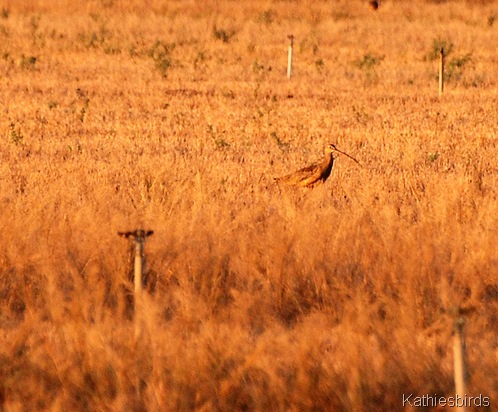 As I am looking at curlews I am listening to western meadowlarks sing. Their liquid notes flow over my body in a soothing sweetness. I disappear inside their song as I stand in the dust on the side of the road. 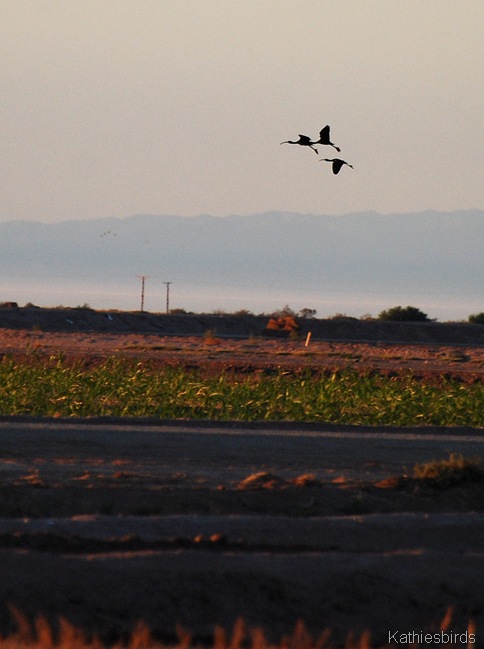 My reverie is broken when three dark bird lift off and fly with long curved bills and trailing legs. I recognize their silhouettes as ibises!  I watch them fly, their bodies curved, their legs trailing behind, like crooked old witches flying across the sky! I smile to see them, then return to search the field where I find a killdeer hunkered down between the rows. 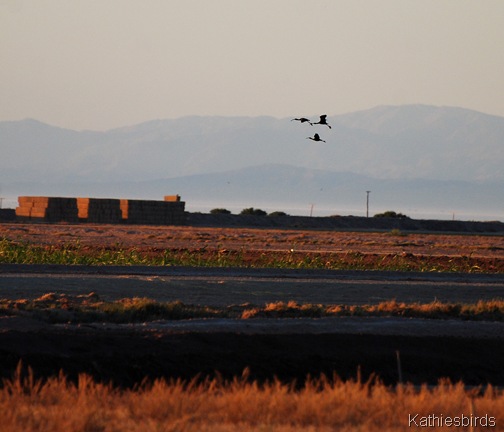 The sun hovers briefly on the horizon, then slips below and is gone. There is no time to drive anywhere now. It will soon be dark. So Gus heads west back toward Vendel Road and Route 78. I think we are going back, but he surprises me and we turn north onto yet another dirt road between the fields onto Brouchard Road. Here we thump along slowly past the egrets and hay stacks. Suddenly a great cloud of brown birds flies up and over our heads and I am seeing over 100 curlews in flight! It's a good thing the summer is over or I would be catching flies in my wide open mouth! I am truly astonished! 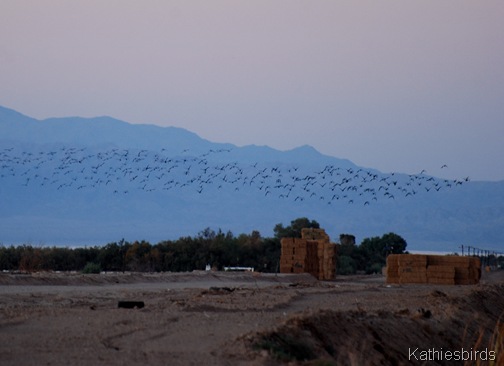 Evening Curlews in flight near the Salton Sea

We continue our drive north to Walker Road where we turn west again. I can see the Salton Sea as a thin blue shimmer on the horizon. It is so close! Why can't I get there? We finally see the first sign from the refuge. It is a small blue and white sign designating this corner as a boundary to the refuge but it says "This area closed to public." So we drive west to Baker road where we find yet another sign telling us the same thing! Discouraged, we turn south on Baker Road where we drive past bee hives and hay stacks and a line of tall salt cedars growing along the edge. How can we be so close yet so far away? When we hit Bannister Road again we turn west and head for route 78/86. As we come to the point where Vendel Road crosses Bannister we stop to measure the distance we have travelled. As we do, I suddenly see a huge brown sign saying, "Sonny Bono Salton Sea National Wildlife Refuge 2 miles!" We can't believe it! We drive past Vendel road and turn around so we are now facing east. There on the west side of the intersection is another sign with the same information! if we had just gone straight across Bannister Road on Vendel Road as I had wanted to it would have only been 2 miles to the refuge! But there was no sign on Vendel Road heading north. The only signs were on Bannister Road coming from the east or the west! By now it was dark so we did not drive down the dirt road. Instead, we head for Rt. 78 with the top down and the wind in our hair!