Art and Birds in Phoenix 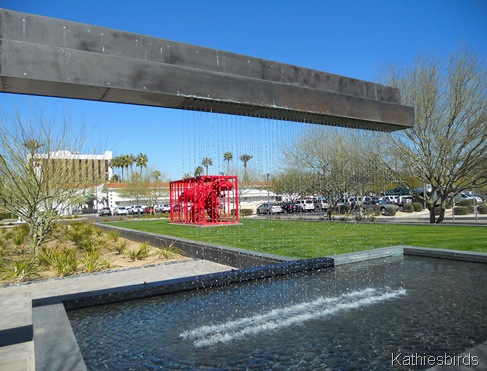 Last month on my birthday Gus took me to Phoenix for the day. We went to the Phoenix Art Museum for a few hours, then headed over to Encanto Park to find a certain bird that is only found there and which I did not have on my Life List. But first…the Museum! 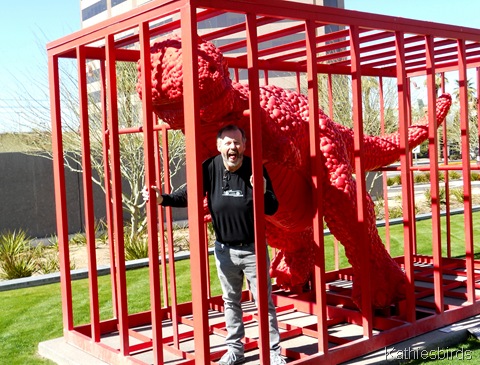 Gus gets Goofy with the dinosaur! 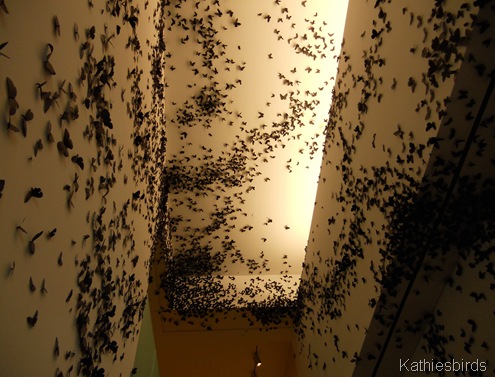 Butterflies in the lobby. 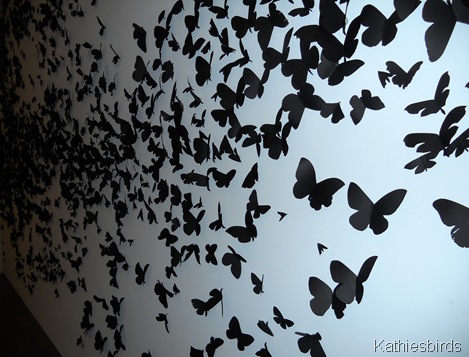 When I was in collage one of my art professors was always drumming into our heads that “Art is about IDEAS!”  I have never forgotten this and it makes me look at things in a different way. I love this collection of butterflies climbing across the walls and ceilings of the museum. As I started to photograph them I started wondering why the artist chose to make the butterflies black. So many people associate butterflies with life and resurrection, yet the color black is often associated with death. Did the artist choose that color for that very reason? Or did he or she choose black simply to have a monochromatic scheme and to get you to focus on the shape of the insects and the pattern instead of color? I do not know the answer, but that’s the thing about art. Everyone can make their own interpretation and take away their own meaning from what they see. 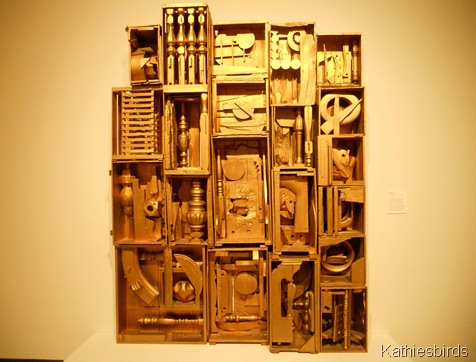 This piece is by Louise Nevelson. It’s called an assemblage because it is assembled from found objects. Louise wandered the streets of New York City collecting things she found and assembling them into these large sculptures. I remember learning about her in collage, so it was fun for me to see her work in real life instead of just on the pages of a college text book. 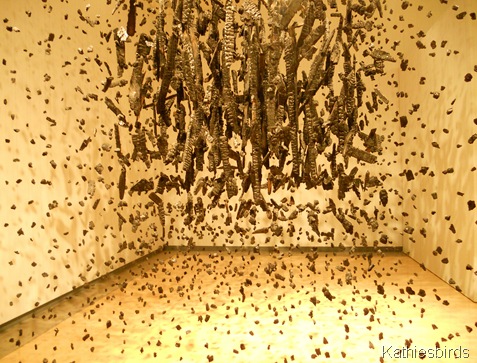 I first saw this art installation a few years ago when I visited this museum with my then daughter-in-law. Today was only my second time being here and it was Gus’ first time. Art is one of the few things we have in common and love to share together. It was fun to watch him discover various pieces. 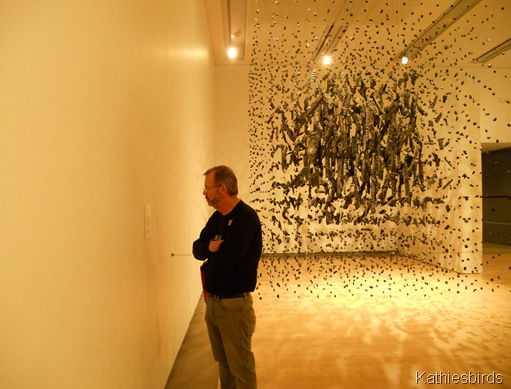 Cornelia Parker’s installation is constructed from the charred remains of a burnt Texas church that was struck by lightening. The London-based artist conceived of and created the work while at ArtPace in San Antonio. Featured in the 1997 Turner Prize Exhibition at the Tate Gallery (London), the work was described as “chunks and splinters of charcoal suspended from the ceiling to form the illusion of a cube, dense at the center, thinning at the edges. It appears at once flat and three dimensional but never solid, almost disintegrating before our eyes.”

The title refers, in part, to the scientific term, “cold dark matter,” used to describe the unquantifiable in the universe. “Mass” suggests not only a spiritual gathering, but also the solids and voids that are the basic elements of sculpture. The artist also thinks of this work as a charcoal drawing, or an abstract painting against a white background. 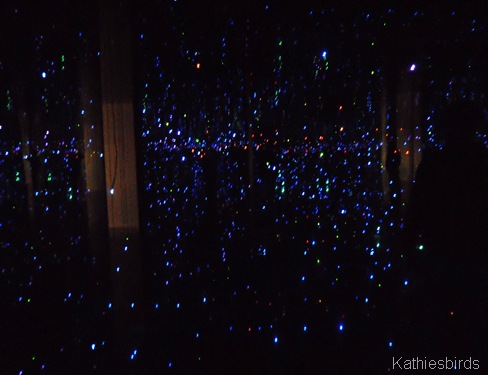 The firefly room is one of my favorite installations in the museum. You enter the all dark room through a multi-angled corridor which prevents outside light from entering. The room is painted black and lined with mirrors. From the ceiling thousands of tiny LED lights are suspended. It is meant to give one the feeling of being in a summer field at night with thousands of fireflies flickering around you. It was interesting to me that Gus felt like he was among the stars in the universe. We both loved it but when he left the room he felt as if he was now closed in a tight box. He felt confined and he wanted to be in such an infinite place again. I love art! 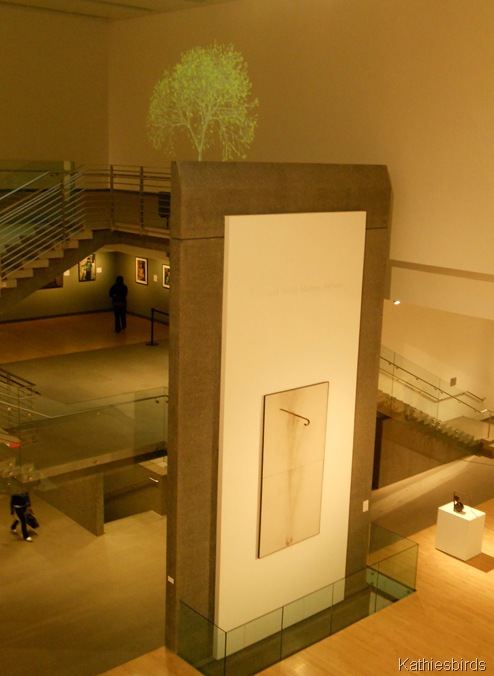 This part of the museum is multi-level and holds the Modern Art collection. I walked by this art piece with the cane when I was on the main floor. The cane caught my eye because it reminds me of my grandfather who always used a cane and had one that was very similar. It looks as if ashes are falling from the cane and it reminded me of when he died. I know the artist did not create this work for me or my grandfather, but that is what it made me think of and that is what art is suppose to do for you. However, it became even more meaningful when I went to the second floor and saw the film of the tree on the wall behind the cane picture. If this was a video you would see that the tree was swaying in the wind. That tree motioned reminded me of the day my nana died because I remember sitting on her bed and looking out the window at a willow tree beyond that was swaying in the wind. However, it was not until I wandered over to this corner of the museum that I saw the two pieces in conjunction with one another. No one could have known or planned this thing, but it spoke to me. It moved ME because I found something personal in someone else’s art. 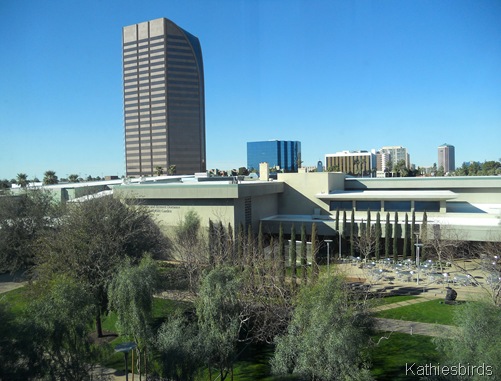 View out the window of the Phoenix Art Museum

We spent about three hours in the museum and then our heads were full of art and we couldn’t take it anymore! So, we headed a couple miles down the road to the west to Encanto Park. Rumor had it that one could find Rosy-faced lovebirds there. They are an escaped population that has naturalized and is now able to be counted on eBird. Gus drove into the parking lot on the west and we got out and walked toward the area where I was told I might find them. I gazed up and down the street looking for something different. It was late afternoon, early evening by now and the sun was sinking low. I thought I saw the motion of what looked like a greenish bird across the street in a tree behind someone’s house. I watched and watched but the bird did not reappear. Gus and I walked about 1/4 mile down the street, then headed back towards the main parking lot. As we neared the corner I suddenly heard a bird call I did not recognize. I followed the sound to a palm tree across the street and on the corner of the south section of the park and there they were! Rosy-faced lovebirds for my birthday! 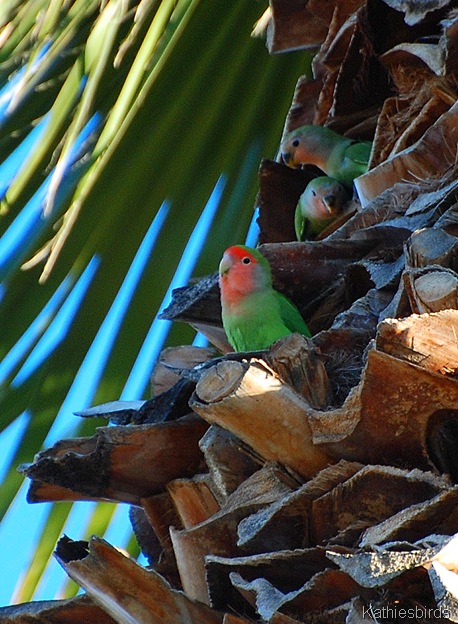 Aren’t they so cute! 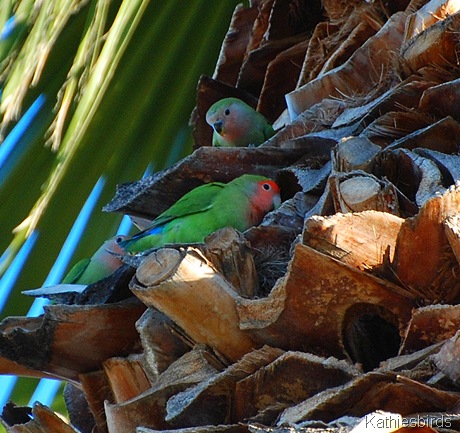 They came in and out of the holes in the cut fronds. 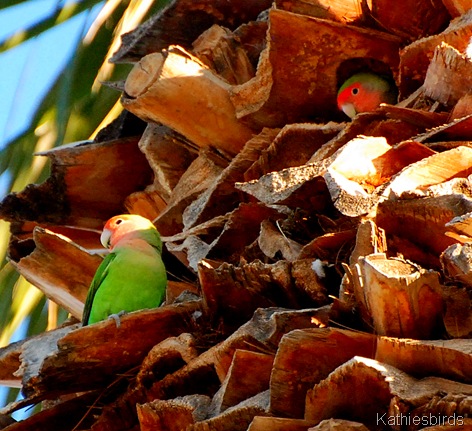