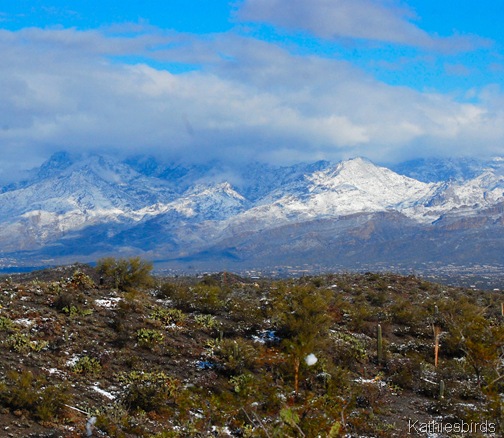 A little over two weeks ago we had snow here in Tucson. It was the day before my birthday and I hopped in the car and took a drive over to Saguaro National Park-Rincon Unit. I wanted to capture pictures of the snow on cacti, but apparently half the town of Tucson and every other tourist had the same idea! The place was packed! With temperatures headed for the 90’s later this week, the snow is but a fast fading memory, but on that day, it had an impact on birds and wildlife. My own feeders were full of seeds and likewise, full of birds. On this same day my friend, Celeste, invited me over to her house in the afternoon to watch birds and enjoy the comfort of her fireplace since she knows how much I miss mine from my apartment in Andover, MA. Celeste lives in the foothills of the Catalina Mountains. We both share a love of birds and nature, and now, Arizona. As we were sitting by her fireplace the light outside the windows grew dim. We could hear the cheerful chattering that Gambel’s Quail make as they feed and communicate with one another. Celeste and I were doing much the same as we chatted by the warm hearth and sipped our Earl Grey tea. Suddenly we saw a ghostly figure sail past the window and land in a nearby tree. A quick look through the bins revealed that it was a sharp-shinned hawk. We made the observation and continued with our conversation when “BANG!” The room reverberated with the impact sound of a bird hitting glass. We both leapt to our feet and rushed to the window peering out cautiously at the scene beyond.

Caution: Beyond this point are graphic photos of a bird of prey eating! 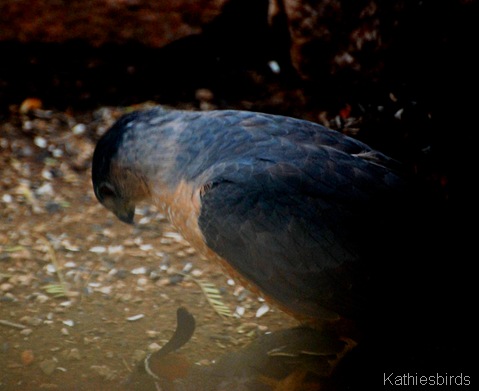 We looked out the window with a bit of horror to see the hawk pinning one of Celeste’s yard quail to the ground. Now, you might think that we were tempted to rescue the bird, but here is why we did not. In spite of what many people think, it is very hard for raptors to actually capture prey. They are not successful most of the time. So, instead of rescuing the quail, and although we felt very sorry for it, we backed away from the window so the hawk could eat. The recent cold and snow had been very hard on these small hawks who depend on this type of meal to survive. It really does put me in a bit of a moral dilemma: Rescue the quail and the hawk dies. Let the quail die and the hawk lives. And, I happened to know there will be plenty more quail come springtime. 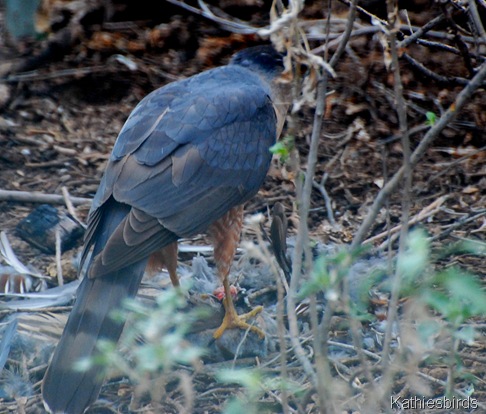 The hawk was initially directly below the window over Celeste's kitchen sink. We backed up so as not to scare it off its prey, and then we turned the lights out inside the house so the hawk could not see us as well. Eventually the hawk hopped a bit farther off into the brush with the bird clasped firmly in its talons. After a few more shots we left the hawk alone to finish its meal in peace. 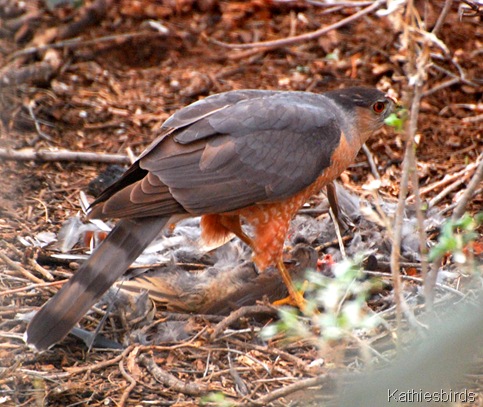 I couldn’t help but think as I drove home how glad I am that I do not have to go out and kill my dinner every night. It is a gruesome task! There was a time when this experience was all of humankind’s daily existence. We are all so far removed from this nowadays. Most people do not even think about the animals they eat every night at their dinner table. No, I am not a vegetarian, nor do I have plans to become one. I just am saying that we cannot pass moral judgment on nature and the animals who need to eat one another to survive. If we humans did not put feeders out to attract songbirds to our yards, it would be less likely that we would see this scene played out so close to home. But we do, and I will continue to feed the birds in my yard and marvel at the beauty of the birds, whether they be predator or prey. I am just saying that observing this drama so close up really made me think. I was thankful for the opportunity to observe nature in action; I was thankful that the hawk was able to capture a meal; and sorry for the poor little quail. All three of these emotions exist in my heart at the same time.

Note: If you look closely at the photos above you can clearly see the sharp shins for which this hawk is named.