Morning Notes: The Beginning of December 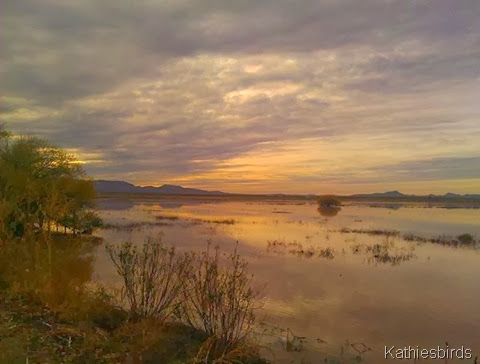 It’s 6:20 a.m. and the sky is just starting to lighten to a soft shade of gray. A few minutes ago when I stepped out the door I could still see stars shining brilliantly in a clear, dark sky. Though there is a bit of a chill in the air, it still feels soft and welcoming. We have had a few days of high, thin clouds with higher humidity and mild temperatures. I have not had to use neither heat nor air conditioning, but that will soon change as cooler temps are predicted for later in the week with much colder nights. Even here in the desert, winter does come.

I am up early this morning with so much on my mind. Yesterday Chris Rohrer and I went birding at Whitewater Draw in southeast Arizona. It is one of my favorite places to bird, and he and I started our birding year there on January 3rd. How can it be that it is already December 2, 2013? But it is and before I know it these last few days of 2013 will be gone and a New Year will be upon us. Change is underway and who knows what the New Year will bring. 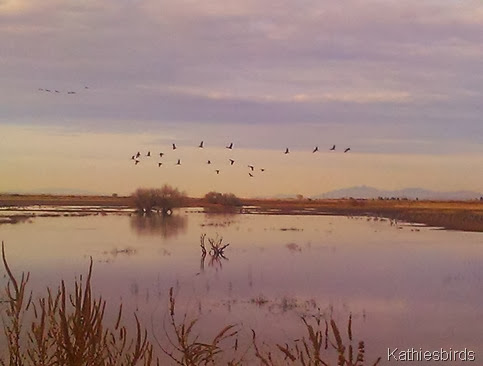 Yesterday at Whitewater was a soft, gray day. It took us over an hour just to drive the two and a half mile road into Whitewater Draw since we kept stopping to count birds. All along Coffman Road we saw sparrows, doves, a couple of kestrels, a covey of Gambel’s Quail, and surprisingly, a pair of Bendire’s Thrashers! There were so many birds to see out both sides of the car. We would drive a few feet, then stop, then drive somemore. At times Chris would get out of the car, but I stayed inside and scanned the grasses and scrub bushes for more birds. By the time we got to the entrance to Whitewater draw it was almost 10:30 a.m. and we had counted 19 species of birds! But that was just the beginning. By the time we left Whitewater Draw seven hours later we had counted 48 species of birds, with a few yet to be identified. After a full day of birding we ended up with a current trip list of 62 species on our first day of December birding! It will take awhile before I have pictures to show you, but I can tell you it was a fun day. Yesterday’s birding added 8 species to my Cochise County Life List; 13 species to my Cochise County Year List; and 1 species to my Arizona and United States Year List with the addition of a White-throated Sparrow I found in a brush pile near the Owl Roost Area. Note, we did not enter this restricted area but walked the perimeter peering into the willows hoping for an owl. We never found any but we did find the White-throated sparrow along with four Northern Flickers and a family of Pyrrhuloxias! 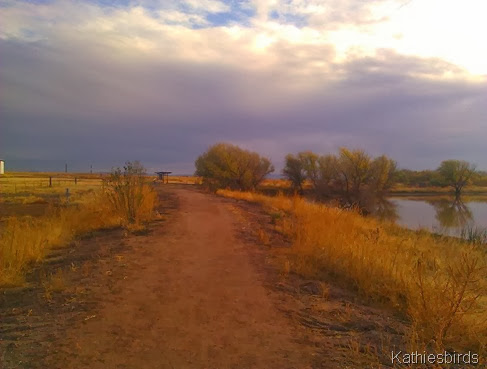 In the evening the sun briefly slipped from behind the cloud bank and turned the grasses golden. The Sandhill Cranes which had dropped in waves earlier in the day continued to arrive with a loud garrooing. Thousands of them filled the sky and lined the shore of the ponds. The birds that had been grazing in the distant farm fields now lifted off and resettled in the water. You cannot imagine what it looks or sounds like. It is one of those things you just have to be there to experience.

The sun is up and now I can see that we still have a few high, thin clouds, though mostly the sky is a pale blue. While it’s currently 45 degrees F, it is suppose to warm into the 70’s once that sun sails up from behind the Rincon Mountains.  More bird blogging coming soon! Time to count my yard birds! 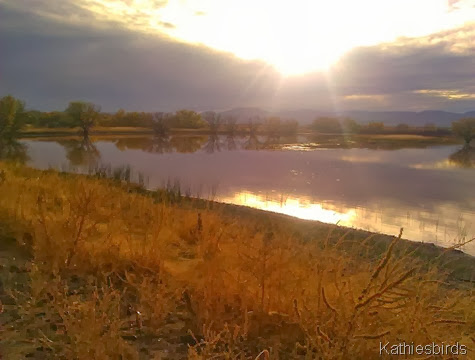 Note: All photos are cell phone pics I took yesterday while at Whitewater Draw