Notes From My Nest: Weather, Birds, Holidays, and thoughts on Moving 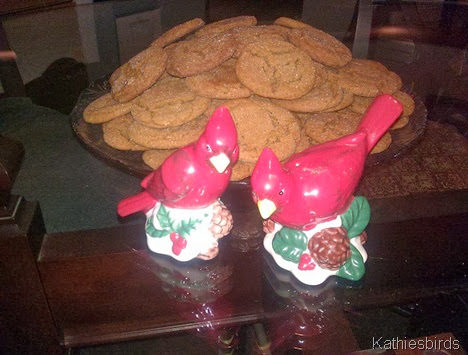 After a few days of a cold spell with lows below freezing, I awoke this morning to clear skies and rising temperatures. Like everyone else, I am in the midst of holiday preparations. Yesterday I spent the afternoon baking ginger snaps while listening to Christmas music with the Christmas tree all lit up. Yesterday was still cloudy and cold, but today it was already 45F by the time I got up, and 55F by the time I got out of my car at Michael Perry Park to drink my coffee and watch birds.

I am trying to count birds at the park at least once a week until we move. The eBird record for this birding Hotspot is still blank on so many weeks. I am trying to fill in as many of those blanks as I can. I arrived around 9:30 a.m. and spent nearly two hours counting birds. In that time period I saw 24 species of birds, with the highlights being 2 Abert’s towhees, a pair of Black-tailed Gnatcatchers, a Pyrrhuloxia and a gorgeous Plumbeous Vireo I spotted in a pine tree by the restrooms. Its all gray body with two white wingbars, a white throat and belly and sporting a pair of white spectacles made the I.D. unmistakable! I watched as the bird pulled a fat bug from beneath the bark and then gobbled it up! By now I had peeled of the two extra layers I was wearing when I arrived. It had gotten so warm. When I got back to the car and saw the temperature I knew why. In just under two hours the temp had risen nearly 15 degrees to 70F!

The cold temperatures have brought the birds to my feeders in flocks of over 20 Lesser Goldfinches and around 30 House Finches. My Mourning Dove populations are down, however, with the vigilant hunting of a family of Cooper’s Hawks. Sometimes I see the adults and sometimes I find a juvenile. Yesterday morning a juvenile Cooper’s Hawk stood watch from my neighbor’s rooftop where it perched on a vent pip for over an hour. 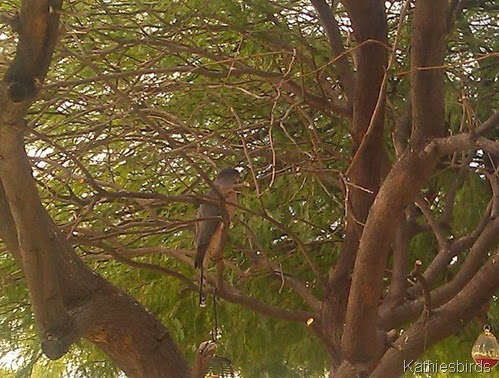 But that is nothing compared to last week when I came out of the garage to get in my car to do errands. I was talking on the phone to my husband and when I turned around I saw an adult Cooper’s perched in the mesquite tree not more than 10 feet away from me. It was so close that I was able to take a picture of it with my cell phone camera. Then, I went back inside and got my Nikon and with its 70 to 300mm zoon on it and tried to take some more shots. By then the bird had hopped up higher in the tree and was peering down at me. Suddenly it launched itself off the branch straight towards me! I dropped the camera to my side and gasped as the hawk hit the side of the thistle seed feeder where a tiny Lesser Goldfinch was eating. Though someone lost a downy feather in the process neither bird was hurt and the hawk flew off over the rooftop with empty talons while I stood there gaping!

Knowing that I am moving to Maine at the end of January makes everything stand out to me. Now each time I see a bird I think that I may not see this species again for a long time. Each day that it is warm enough for me to go outside I think of how cold and snowy it will be in Maine. Each time my grandson hugs me I think of how I will not get these daily hugs once I am gone, and I wonder if he will even remember me?

For those of you who do not know, Gus and I are moving to Maine in January. I’ve known this was a possibility for over two months now, but when the company called him with a job offer right before Thanksgiving I think we were both stunned. We have been married for 36 years and lived in Maine twice, but have never been able to get a job in that state. My husband is a native “Maine-iac” and though he told me he wouldn’t miss the state and that this would be our last move when we moved here to Tucson I just knew when the opportunity presented itself that he would not turn it down if it was offered to him. While he scored a job interview within two weeks of applying for the job, it took another three weeks before it was offered to him. I made the announcement last weekend here and on the Birding Is Fun blog. Now I am just trying to get my own head around it, and enjoy my last few weeks here in sunny Tucson. Moving to Maine in January seems like the height of insanity but once the spring comes I know I will be happy. Gus’ job is in Bath, Maine, so there is the possibility that we will live near the coast. In all of our travels across the United States we have never actually lived near the coast. Even when we lived in Maine before we lived far inland. This time I believe we will stay put until Gus retires. 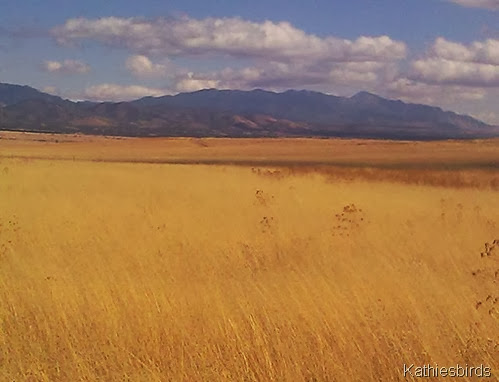 As for my other birding adventures, well, Chris and I are still getting around. We took a trip to the San Rafael Grassland a few weekends ago, then we drove out to the Santa Cruz Flats this past Sunday where we finally got our Mountain Plovers! What cute birds! We tried so hard earlier this year to find this species without luck, and since there are no Mountain Plovers in Maine, I was sure happy to get this bird on my Life List before the move! Leaving Chris will be very hard, but we are already planning for him to visit me on the east coast this summer where we hope to bird all over New England. And with both him and Celeste back here in Tucson, as well as my son, I will be coming back to visit them all and go birding! Stay tuned for more birds and part 2 of my Cave Creek Canyon birding Adventure!

Note: all of today’s photos were taken with my smartphone.