Notes from My Nest: Just Home 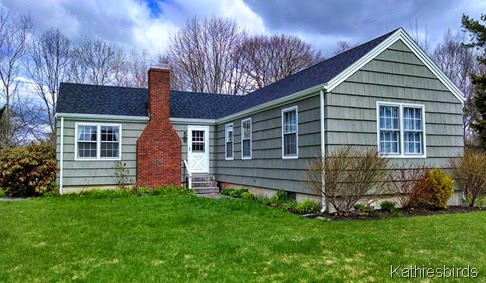 I just arrived home last night after spending four days in Connecticut with my Mom. As I drove the winding road down the point the now familiar sights of woodland, pastures and boat moorings came into view. One either side of the road I could see glimpses of the two bays that define Mere Point. The serpentine road was wet with recent rain giving it a sleek, glossy gray appearance. Overhead the steel gray clouds scuttled along in the strong overhead winds. 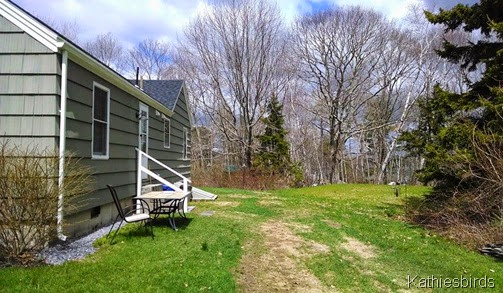 I pulled into the dirt driveway and parked near the road, not wanting to run the risk of creating ruts if I drove across the lawn as far as the door to the house. Gus came to help me unload and we dodged scattered rain drops as we brought groceries and baggage into the house. As soon as I had finished unloading and putting away perishables I gathered my bird seed and went outside to fill feeders. To my surprise, just about all the feeders were empty, including the new pole feeder we had erected just last week. There were so many birds in the yard though! I couldn’t believe it. Here it was, almost evening, and birds were everywhere! I counted over 2 dozen white-throated sparrows alone in the yard, as well as numerous other species. 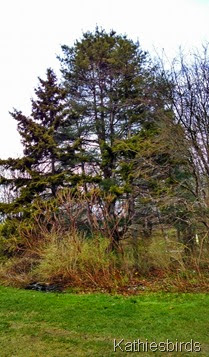 It was while I was counting sparrows beneath the pine and spruce trees that I noticed something else. As I stood inside looking out through the glass of the storm door I saw movement in the pine tree beyond the spruce. At first I thought it  was a squirrel, but it didn’t move like one, and it was thicker and darker. I focused my binoculars through the branches and caught glimpses of a thick black body with a grizzled looking head and back. Plus, this animal seemed to be shimmying down the tree trunk head first! Could it be a Fisher Cat? No, they are more sleek and wily. Oh! It’s a porcupine! I wanted to get a better look, so I darted out into the rain with my bins.

The little porker decided to stop its downward progress and turn around. It climbed onto a lower branch where I could see its cute little face and the grizzled look of the quills on its back. Gus opened the door to talk to me and I asked him to hand me my cell phone. I should have had him get my Nikon D80 instead. Trying to take a cell picture in rain with gray skies overhead and thick branches doesn’t work too well. Plus, the porcupine decided it didn’t like me that close and started to climb farther up the tree. I went back into the house to get my “big” camera but by the time I came back out I couldn’t even find the beast at first. I walked into the brush and started to circle the tree. I looked all up the trunk but could not find the porkie. 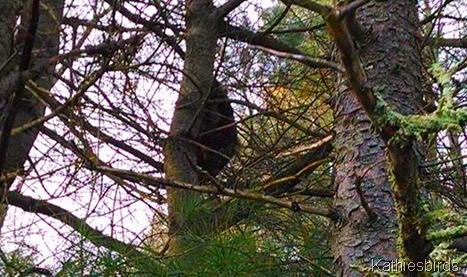 Finally as I circled the trunk farther I looked back and up and there out on a high branch thick with needles I saw the brown lump that was my quarry. All the while I had been trying to protect my camera and bins from the light rain showers. Now I pulled it out and attempted to focus. That’s when it happened…again.

Apparently the motor on my Nikkor 70-300mm zoom lens is failing. It dragged and chattered and vibrated. It would not focus on the porcupine. I quickly changed all the setting to manual, and tried to manually focus, but when I depressed the shutter the whole thing still chattered. I wanted to swear and I resisted stamping my foot. Here was the opportunity of a Lifetime and I was going to miss it! I could see the animal so clearly through my bins! I wanted to capture that cute chubbie face for everyone else to see, but it was not to be! I posted my few lame photos on Facebook after I went back in the house. 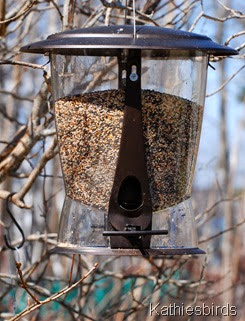 This morning when I got up I looked for the porcupine again, but it is long gone. If it’s sleeping up in that tall Eastern White pine I cannot see it. And while my feeders are full once again, there are not as many birds here this morning as there were last night.

However, as I was wandering around my yard with the dog and my bins I heard the descending call of a downy woodpecker. I looked overhead to see one flying in undulating flight towards the still bare branches of the tall deciduous trees that surround my yard. As it landed I saw yet another downy clinging vertically to a different branch. Close observation revealed the first downy I saw fly into the tree was a male and the one clinging to the tree branch was a female. She quickly got into a horizontal position on the branch and raised her hind end with her tail feathers sticking out. This is an unusual position for a woodpecker and I started to suspect something was up. Sure enough, next thing I knew the male flew over and landed on her back. He got into twisted position and they stayed coupled far longer than I have seen other birds when mating. Then, as it is with most of nature, the male flew off in one direction and the female in another. 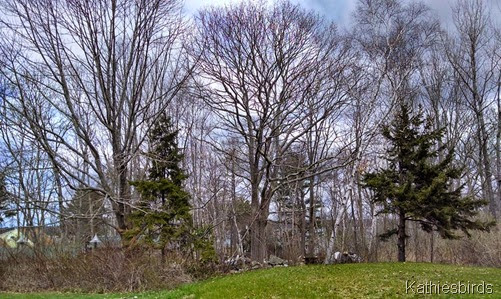 Tree in the center is where the downy woodpeckers were.

Me? I stood there in wonder at this small bit of nature that is now my home. How did I get this lucky to live here? Gus found this house before I ever arrived in Maine. He only looked at one other house, and that was after he had seen this one. He was scheduled to look at another in the afternoon, but canceled the appointment. He already knew this was the place that would make me happy. Everyday there are new sights to see, new wonders to behold. As I sit here writing this I looked out my window to see a Cooper’s Hawk walking around on the lawn like a chicken! Perhaps THAT is why I have not seen as many birds this morning! I love this house and this yard. Last night when I was driving down Mere Point road I kept thinking to myself, “It feels good to be coming Home!” 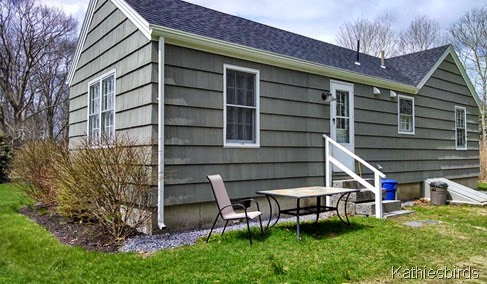 On a side note: It appears I need to get a new camera, or at least a new lens as this one is not working very well and it has a perpetual dust spot on the lens that I can literally see from the front but cannot remove. Also, my computer is now over 8 years old. All of it needs upgrading, a daunting task for me and one I have put off for too long. I want to keep on blogging and writing and sharing my world and the time has come to finally deal with all of this. 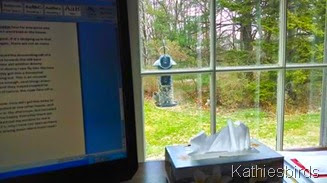