Notes From My Nest: Yards Birds 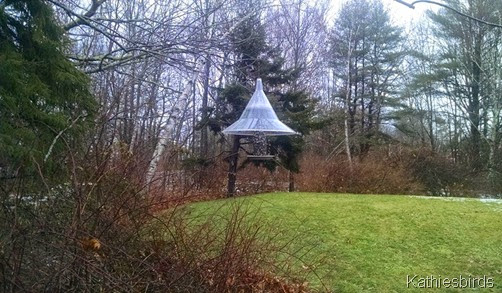 Thursday, December 11, 2014 Mere Point Cottage: The heavy rain is over, though we are still getting a few on and off showers. In the gray outside world the birds are coming to empty feeders,while I watch helplessly from inside. Gus would gladly fill them for me, but he leaves before dark and returns after dark, and often he has to stop at the store to pick things up since I cannot yet drive myself to the store. After days of being stuck inside by snow, sleet, ice, rain and a bum knee, I am getting restless and frustrated and I am feeling trapped.

I look out the window at the mostly bare yard. While not complete 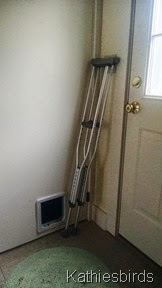 ly healed up, I am getting around better than I was at the beginning of the week. I start to think that maybe I can put on my  leg brace and go outside. Maybe I can fill the feeders. So, I walk to the back door and set my crutches down. I put my warm and fuzzy fur lined rubber shoes on and wrap my knee in the leg stabilizer that I have not worn since the day they sent me home with it last week.  I put my coat on, tuck my cell phone into one pocket and some suet into the other, and head out the door! Getting down the stairs in the tricky part, but I am using only one crutch, so I can grab the stair railing with one hand while I work my way cautiously down the steps. I have already placed the container of bird seed on the steps, so once I am down I can use the crutch under my right arm and carry the seed with my left hand. It works! 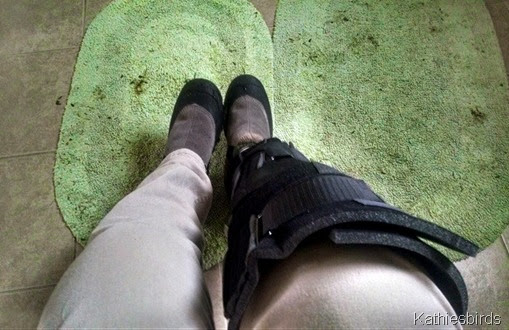 I test the ground, but it is soft and not slippery and I have no trouble making my way to the first and closest feeder, which doesn’t need to be filled, but instead needs the wet seed swept away from the openings. Next, I toss a little seed on the ground beneath the spruce tree so the ground feeding birds as well as the squirrels can get a little food. I have numerous gray squirrels here, and one feisty red squirrel who constantly chatters at me and everyone else and fiercely defends its territory! It’s a short walk to the apple tree next to the driveway which has become my best tree for hanging feeders from. These feeders are also full, but once again need the wet seed wiped away. I take down the busted meal worm feeder to bring in inside. Hopefully I can repair it and refill it. I have discovered that chickadees love meal worms. I used to be squeamish about filling the meal worm feeder, but when I saw how much the chickadees love them, I got over it. I am a bit surprised that they are the ones to eat the meal worms. I thought it would attract some of the other birds, but they are the species I see on it most often. One thing baffles me though. During the summer I had no trouble finding meal worms at the stores to fill my feeders with, but the birds did not eat them very often then, probably because there was an abundance of fresh bugs and grubs out there for them, but now that winter has come and the birds are gobbling them up, I cannot find the meal worms in the stores! Someone out there does not understand bird feeding habits! 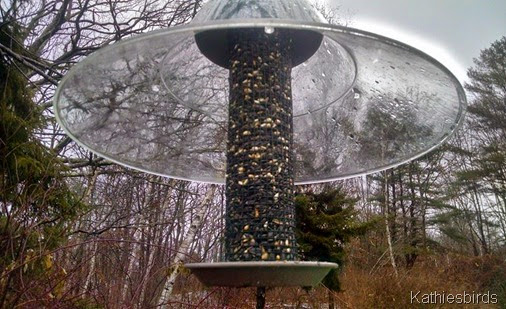 The air feels cool and fresh on my face as I make my way to the back yard. This will be the longest distance I have to walk, and the most treacherous as it is down hill and still has a bit of ice and snow, since it is the northwest side of the house. Still, I am able to pick my way slowly until I am at the edge of the thicket and beneath the ash tree whose gracious branches hold my feeders. I can hear the chickadees scolding me from the thicket as I take the first feeder down and refill it. This one is easily filled and replaced. I move to the next feeder, which is a bit more tricky. 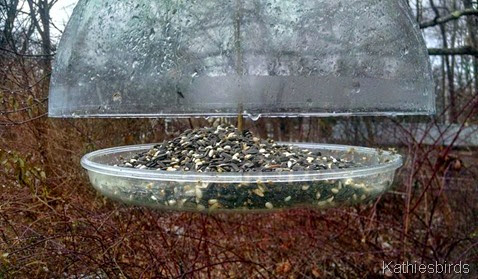 This is the feeder that baffled Gus on Sunday. While I love it because the birds love it and use it all the time, it is a bit difficult to refill. I have to pull it down with one hand while holding onto the container of seed with the other, and then scoop the seed up with a paper cup and slip it between the top baffle and bottom tray. I don’t take the feeder off the hook because it is actually more work to get it back up there. Sometimes the branch bounces back too high for me to reach it and, well, I really can’t climb a ladder or step stool at the moment! 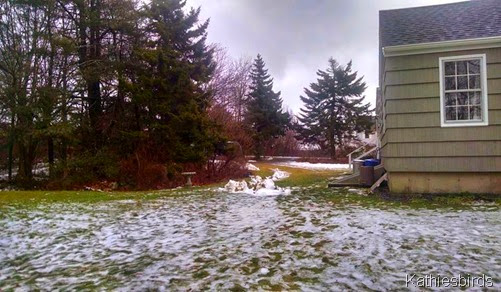 I’ve managed to use up all the seed in the container. I feel the breath of the the wind caress my face.  A light rain is falling and I am cold and damp, but it feels so good to be outside that I don’t care! The neighborhood crows are calling in the distance. Behind me the little juncos and house finches move restlessly in the thicket, waiting for me to leave. I look back at the distance I have to walk to get to the back door. I know that I can make it if I just go slow. I am not tired. I start to wonder if I could walk over to the boat launch. I have not counted birds there in over a week, but I decide that just might be pushing it too far. So, I hobble back to the steps, set the bird seed container down, and make my way up the steps one at a time. Once inside I grab the container and the broken feeder off the step and close the back door. Why am I going to all this trouble? Because I want to, need to see these birds! 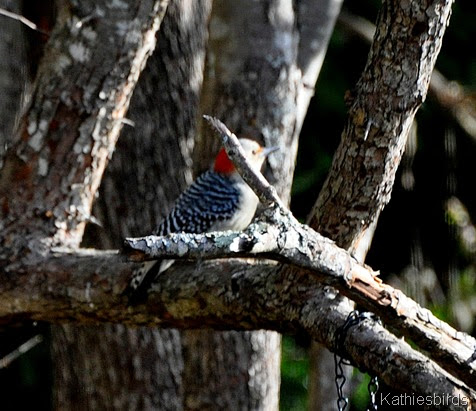 Ever since early November I have had a female Red-bellied woodpecker hanging around. I have tried and tried to get a picture of her, but she is very shy. I sat quietly on the back step in November and just barely snapped this out of focus shot before she flew away again. However, she does come to the feeders almost every day and sometimes several times a day. She especially likes peanuts, but so do the greedy Blue Jays, who swoop in and gobble them up! You can tell she is a female because the red on top of her head does not go all the way to her beak. A male would have a full red strip from his beak to the nap of his neck. 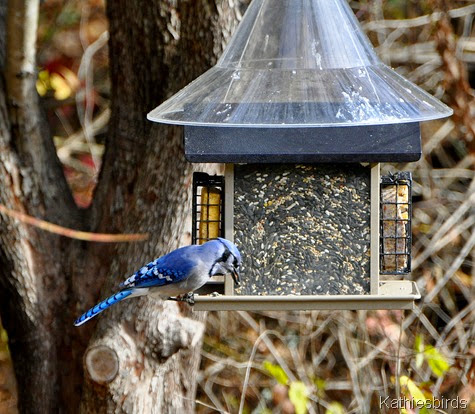 Here is just one of the several Blue Jays that hang around my yard. 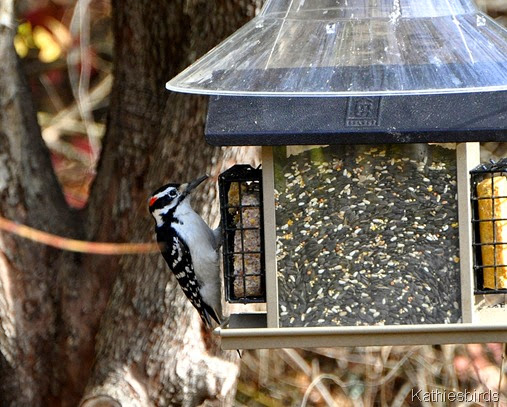 I happen to love woodpeckers and am always pleased to see the Hairy Woodpeckers when they show up. During the snow storm earlier this week I actually had three in the yard at once! Often I will see them and the little Downy Woodpeckers foraging together! Besides the much larger size of the bird and it’s bill, I look for the absence of black hash marks along the stiff outer white tail feathers when trying to distinguish the Hairy from the downy. there can be a size overlap, but the Downy woodpecker always has little black hash marks on its white outer tail feathers. This is a handy thing to know! 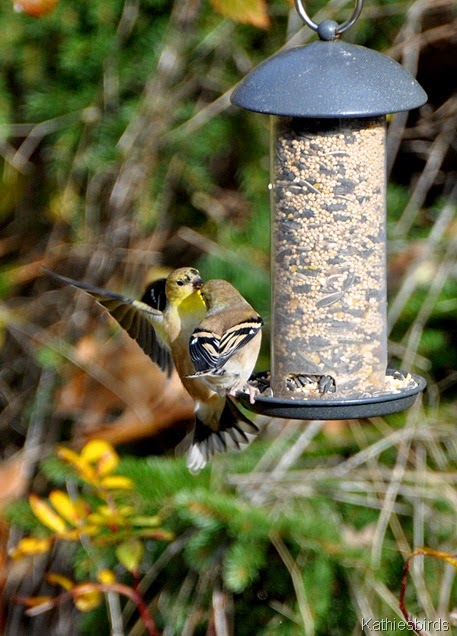 The American Goldfinches have all molted into their winter plumage by now but they are also here on a daily basis. Sometimes there are just a handful, but at other times I have had two dozen or more in the yard! I took down the feeder pictured above because some animal came by in the night and busted it up. It was probably one of the resident raccoons, but you never know. 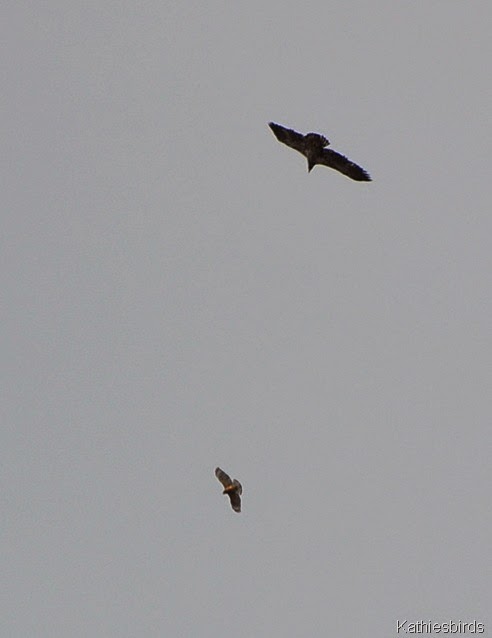 One of the things I like about living on Mere Point is the overlap of habitat. Living so near the ocean, I often see ducks and other marine birds, like ibises or osprey. I also get to see quite a few hawks and eagles. I knew right away that the larger bird pictured above was a juvenile Bald Eagle. It actually drifted quite low over the house, and fortunately I had my camera with me, but what of the smaller hawk? I was unsure what species it was until I enlarged the photos. Here you can clearly see the two coma-shaped white spots at the edge of the wing tips that only Red-shouldered Hawks have. The light is just catching its reddish barred breast and you can just make out the black barred wings and tail. All of these yard bird photos were photographed on November 13th this year.

So, now that my feeders are full again and I am safely and snuggly back INSIDE my house, I think it’s time to make some homemade hot cocoa and sit back and watch the birds while my Christmas music plays in the background! Sounds cozy, doesn’t it! Good news! My Blog and photography are being featured this month online and in the print version of Watching Backyard Birds! Just click on the link and register with your email address for full access to the site. There are no personal questions and no fees to access the website.