The First Warm Day of Spring 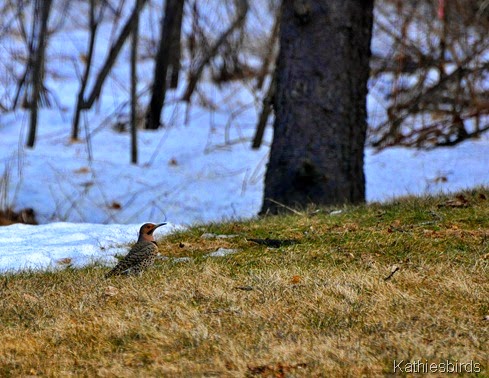 I can tell spring migration has begun. My list of species seen this year has jumped from 70 at the end of March to 78 in just three days! On Friday we had our first warm day of spring with temperatures rising to nearly 60 degrees in the afternoon! Before I even left home for my Physical Therapy appointment I added a Yellow-bellied sapsucker and Northern Flicker to my yard and year lists. While I missed getting a photo of the sapsucker, which flew in, landed on a tree trunk and was gone, I was ready for the northern flickers when they flew in. 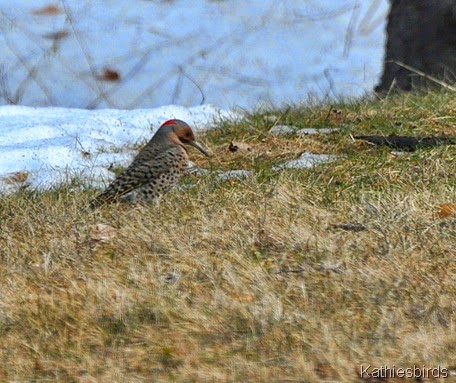 While I managed to get a picture of one of the flickers on the ground, I missed getting them both in the same frame. I was so disappointed that I would have to spend a good part of the day inside, what with PT in the morning, and another doctor’s appointment in the afternoon. However, as I was heading out the door I got a call from my other doctor to reschedule my afternoon appointment! I was now free for the rest of the day! Yeah! 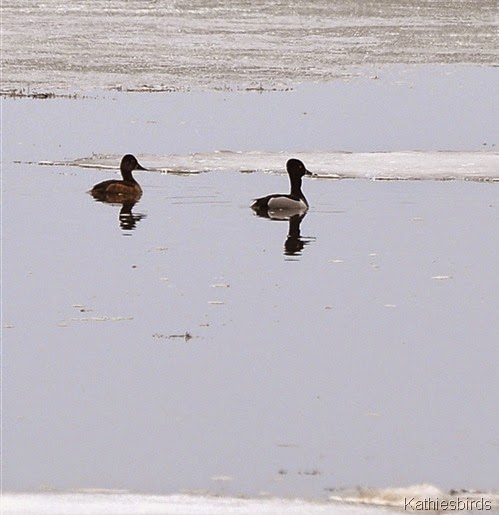 There were so many birds in and around the parking lot of the building where I have my physical therapy that I stayed there and counted birds for awhile before moving on to Sawyer Park. Sawyer Park is on the Bath Road in Brunswick and all winter it has been gated shut, so when I decided to head to Bath to count birds, I was pleased to see the gate open and the road plowed! I quickly turned in and started counting birds. While I encountered a few chickadees and sparrows on the road in, I hit the jackpot when I got to the boat launching site. There in the New Meadows River I spotted a pair of Ring-necked Ducks! I used to see them all the time during the winter in Tucson and Andover, MA, but I had not seen that species here since June 6, 1999 when we lived in Presque Isle! 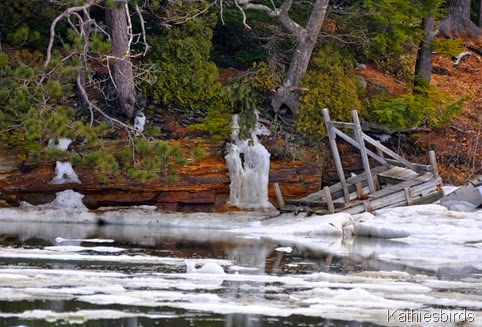 Across the river the melting snow formed ice sculptures along the rocky banks. On this side of the river I am in Cumberland County, but that side is in West Bath and it is part of Sagadahoc County! 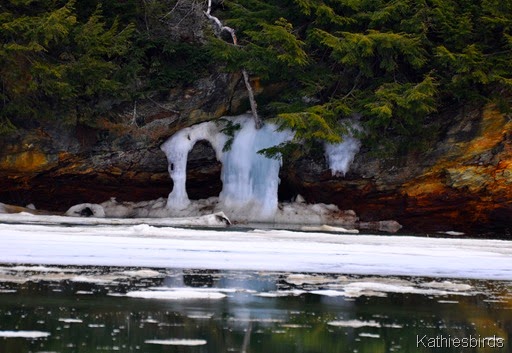 I love the blue I can see in this chunk of ice. Soon it will all be melted and gone. I will not be sorry! 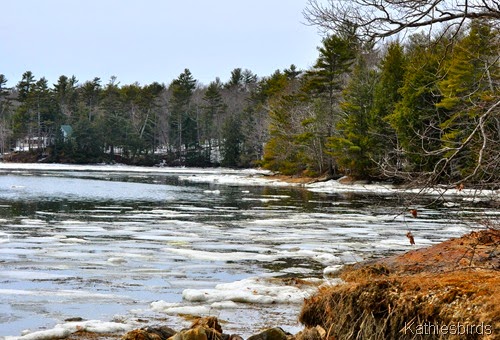 I found many more duck species out here in the water, including buffleheads, mergansers, and black ducks, along with a few gulls. 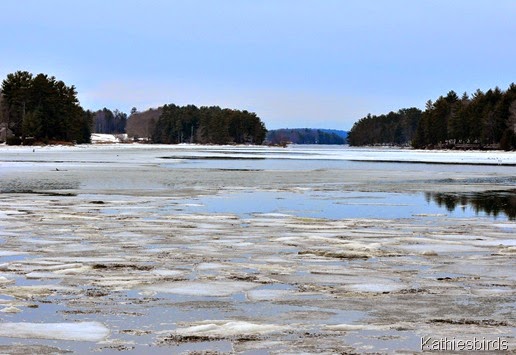 This is the view looking east towards the sea. 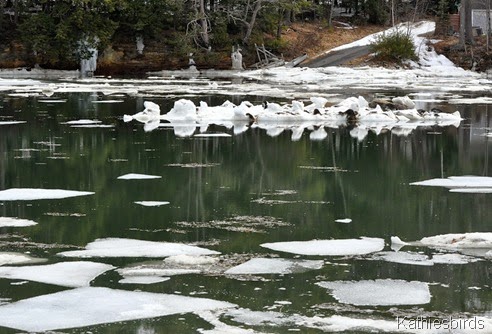 After leaving Sawyer park, I headed up top Bath, Maine to count birds at the Bath-South End Launch Facility. It was so nice to be able to stand on the banks of the river without having to wear gloves! Once again there were ducks in the river. 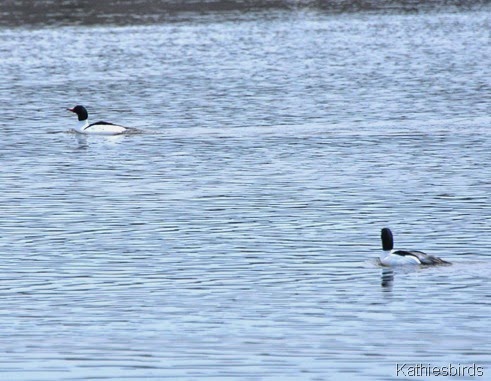 I saw Common Mergansers swim past me.

Later some red-breasted merganser drakes all paddled by.

Farther downriver I counted 3 double-crested cormorants sunning and preening beneath someone’s private dock, but the funniest thing was to watch the mallards and black ducks floating down the river on an ice floe! They didn’t even look at me as they drifted by on their icy canoe! 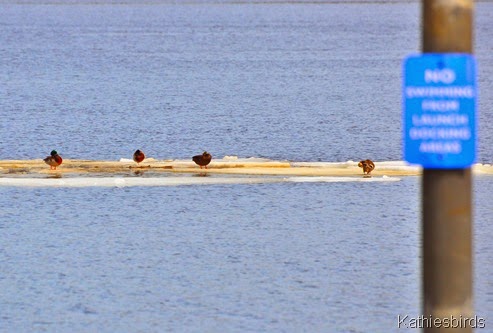 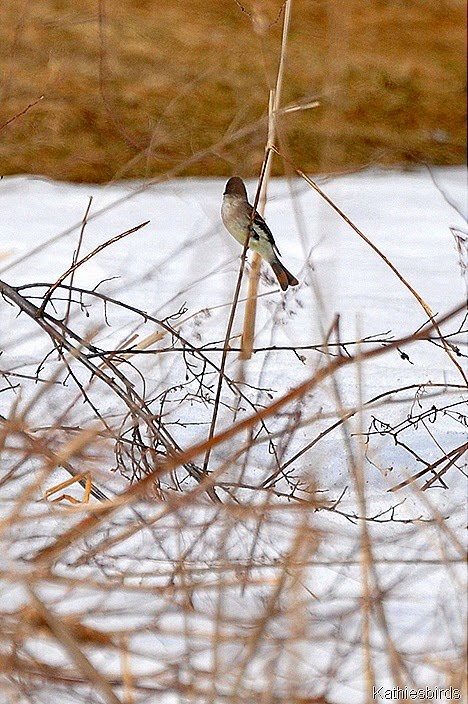 But, I was even more surprised when this Eastern Phoebe showed up!

I kept looking for an osprey to fly over. Everyone in Maine is waiting to see them return. So far I had not seen any. Most of the birders on the Maine Birds Facebook group had not either. I had a pair of adult Bald Eagles fly over, and later an immature flew by even closer! 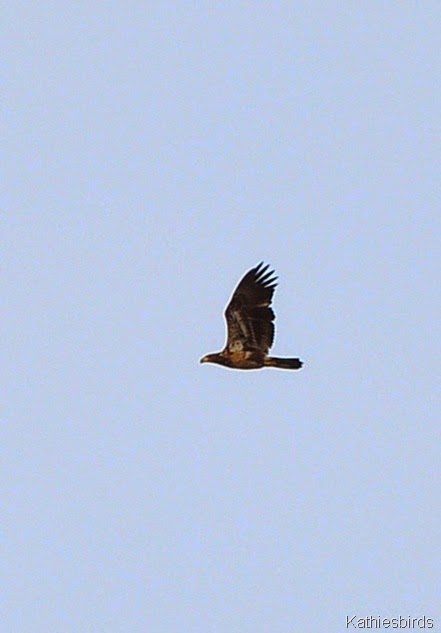 After awhile I decided it was time to move on. It was my intention to head for the North End Launch Facility (those are the official names on the signs) but as I was driving north on Washington Street in Bath I decided to pull into the parking lot of the dog park. I had seen and then heard about this place but never stopped to investigate since it is just north of the south boat launch. It turned out to be a lucky thing that I did. Though it is only a short distance up the road from the south boat launch, I saw different birds here than I did down there. I discovered it has a wonderful cement pier hanging out over the water where one can watch the birds or boats. There is a good view of Bath Iron Works and the bridge over the Kennebec River. The one drawback is the dogs. It is an off-leash dog park so there were lots of dogs and kids and people walking and running around. Everyone was very nice and it was such a nice day that everyone wanted to be outside just like me. I really like dogs. But having them around is not conducive to birding. However, I managed to see a few species anyways, and I did get to pet an English Setter puppy! I was just heading back to my car after talking to a nice lady about her dog and birds and birding. I had just told her how I was waiting to see my first osprey of the year, but so far no one has seen any, when lo, and behold! Look what came sailing in overhead! 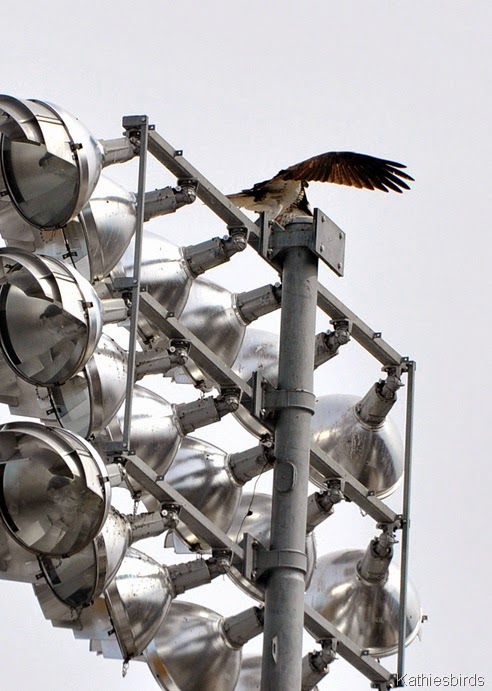 My First of the Year osprey landed right on the huge stadium light pole! 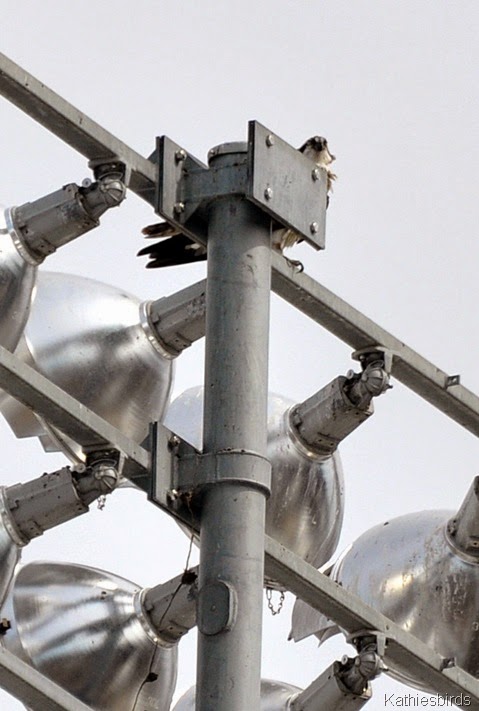 Then, it just watched all of us puny humans below!

Finally I headed to the North End Launch Facility! By then I was very hungry! I had not eaten before I left home in the morning, and I had not stopped anywhere to get lunch. I was too busy birding! I found every last granola bar in my car and consumed them while I was at the south boat launch, but I would not be deterred! I hurried north to the boat launch hoping to maybe catch a straggling glaucous or Iceland gull, but no luck. While I saw a couple more Bald Eagles and scads of ringbills, herring, and Great Black-backed gulls, I never saw anything else. 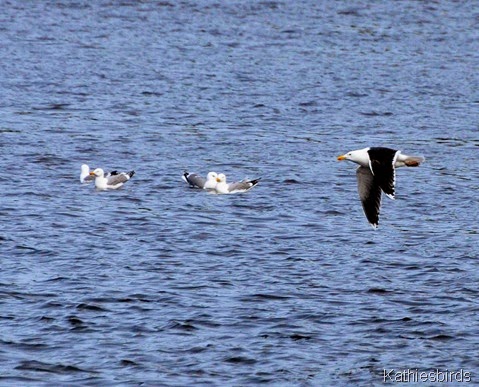 Herring Gulls and a Great Black-backed Gull in the Kennebec River.

I could feel the temperature starting to drop, and my tummy starting to growl, so I did not stay long. There were hundreds of gulls out on an ice-covered island in the middle of the river when suddenly they all took wing! I  immediately started looking for an eagle because it seems they always do this when I am here, but I saw nothing in the sky. But then I looked down at the empty island and saw a large, brown raptor. It looked a like an immature bald eagle to me, but later I read an eBird report from the same day where someone thought they saw a Golden Eagle! Could this be it? 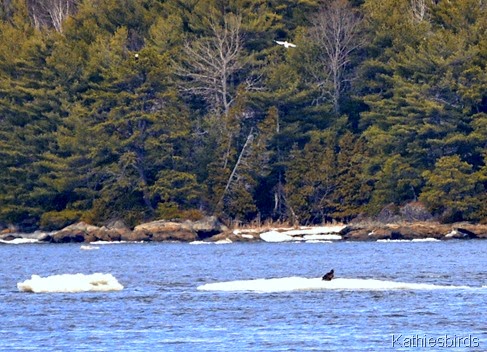 The bird was so distant that even with my 300 mm zoom I could not get vey good pictures. If it had taken wing I might have stood a better chance of identifying it, but it stayed on that ice the rest of the time I was there. It was almost sunset by the time I got home. I had been outside all day! I was so tired and so hungry and so happy! My sweet happy made us sloppy joes for supper, so I went inside to eat, but on my way I counted the evening birds in my yard and later went outside to listen to the peenting of woodcocks in their annual springtime courtship display! I can’t get enough of the birds!

Below are the links to the my eBird Lists for this day and the poem I wrote about the first warm day of spring: 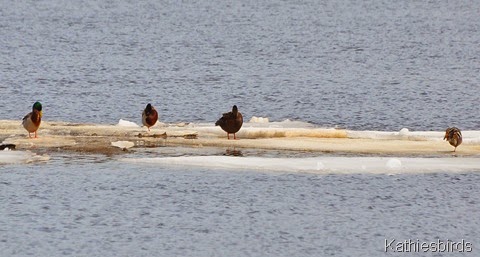