I’ve always known there is magic in the woods. As a young girl I would run to the woods for solace. My imagination ran wild there, as did my body. The woods were both shelter and friend to me. It was a place where my imagination blossomed and I found peace. As Chris Rohrer and I left the high desert in Sierra Vista, AZ we turned onto the road that leads to Miller Canyon. In about 2 miles the pavement ended and we were on an unpaved forest road. We had the windows rolled down so we could listen and watch for birds as my car continued the steep climb. In certain areas the bedrock poked through the dirt and my car scrambled over the rocks. In other areas we encountered sand from wash-outs where water tumbled down the mountains when it rained. We stopped and watched a few birds on the drive up, but our destination was Miller Canyon above and the rare Mexican Spotted Owls! With daylight fading we did not linger long and soon found ourselves up in the trees with shadows deepening around us.

As soon as we parked we were hearing birds. A Broad-billed hummingbird whistled past us. The guinea fowl from Beatty’s Ranch were calling. We quickly grabbed our gear and headed up the canyon. We met Mr. Beatty near his property and had a pleasant chat with him. He offered me a hiking pole and I took it. Chris was already scanning the sky and the slopes for birds as Mr. Beatty told us where to find the owls. Since Chris had been here before I relied on him to lead the way, but then something made me stop and pay attention to what Mr. Beatty was saying. I watched as he drew a detailed map in the dirt. 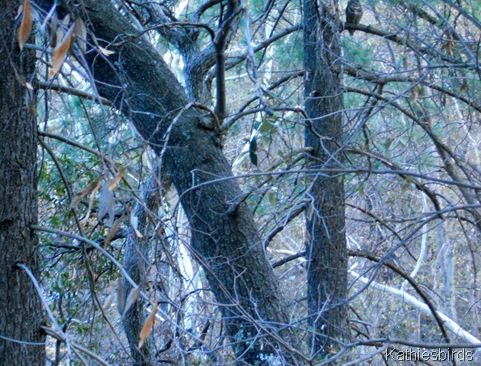 The tangle of trees. Can you see the owls?

Soon Chris and I were off up the mountainside. We hiked through a rubble-strewn wash that made a huge gash in the mountainside. Down into the gorge we went only to climb out the other side and head up the canyon. We followed a bit of a track up the side of the deep and rocky wash, then came to a point where a trail turned off to the left. Chris turned down that trail and we crossed the wash. I followed him but questioned his decision, since Mr. Beatty had said, “Don’t cross the wash again. Keep it on your left and don’t be fooled by the trail that turns off.” But Chris had been here before and he headed to where he had seen the owls before. As the path narrowed and disappeared I stopped. “Chris, we are not seeing any of the signs that Mr. Beatty told us to look for? I think we are on the wrong side of the wash and the wrong trail.” Chris hesitated a moment, then decided to follow me back across the wash and up through the pines to the original road. There ahead of us we saw the Y in the road Beatty had told us about. A short distance later we saw the blue pipes he mentioned. And there across the path was the log he warned us about. He said, “Stand on the log and look to your left and you will see the owls.” So I stood on the log and gazed of into the shadowed tangle. Gray limbs and tree trunks looked like a web as my mind tried to find the birds. Suddenly, about 15 feet up a pine I spotted the owls perched. While one was out on a limb in plain view, the other was sideways and snug up against the trunk. Bingo! Life Bird for me! Chris had already gotten this species last year, but he was equally pleased to see it now. 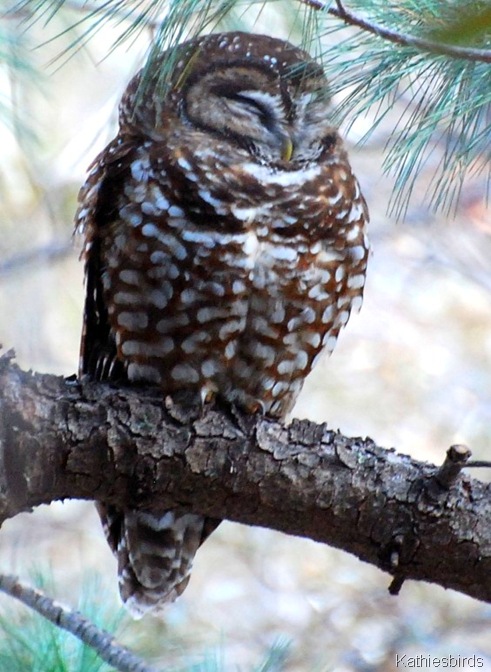 We both stood there in a hush, using only whispers to talk to each other while we snapped away. We both had long lens cameras, so we did not get near to the owls. I would rather go without a photo than disturb these fragile and mysterious birds. The owls were totally relaxed and paid no attention to us. Snap, snap! Snap! We took so many pictures! I changed the settings several times on my camera hoping to get at least one or two decent shots in the rapidly fading light. Finally we figured we had taken enough shots and headed down the hill. But then we paused. We had just seen a post by Laurence Butler and Tommy DeBardeleben showing them gloating over having found the Elegant Trogon in Patagonia a few days before. They has tried for the owl but missed it. We decided to have a little fun and so walked back up and mimicked their poses from when they found the trogon. It was all in good fun, but all the shots are on Chris’ camera, so you will have to follow the links below to his blog to see us in our triumphant poses as well as Laurence’s and Tommy’s! 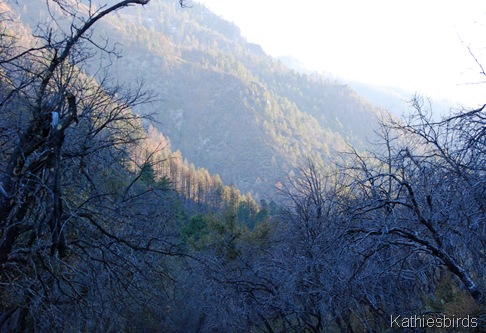 As we turned to leave we were alarmed to hear a flock of Mexican Jays fly in and start to harass the owls. Not knowing what to do, we turned and headed down the canyon hoping that if we left, the jays would as well. The sun was down below the canyon rim by the time we made it back to the parking lot. We climbed into the car tired and dirty, but happy and triumphant. I was in awe that I got to see this very special bird, a species I thought I would never see, but did, thanks to Chris’ encouragement and my paying attention to directions. If you haven’t noticed, Chris and I think in very different ways. I am more sequential while he is more intuitive and experiential. Once again, we make a good team but I sure am glad my sequential thinking paid off today! And once again I discovered that there still is magic in the woods! 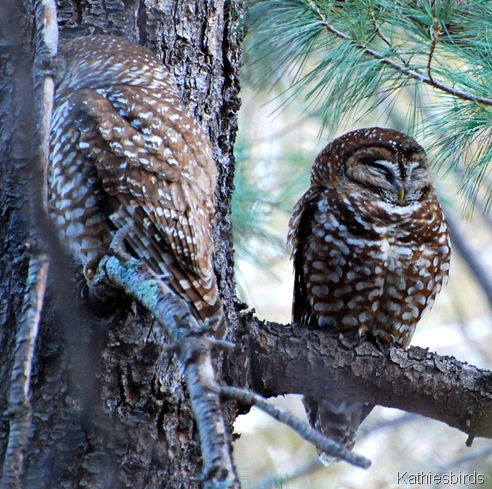