The Birds Went Up and I Went Down! 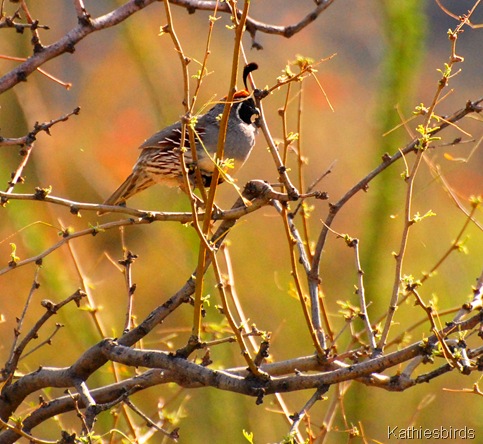 March 27, 2013: Two days after our visit to Las Cienegas NCA Celeste and I decided to meet at the Javalina Picnic area of Saguaro National Park Rincon Mountain Unit. It is one of my favorite places to just relax and watch birds because you can sit at the picnic tables and the birds come so close. I arrived first but Celeste was not far behind, and while her husband went off hiking, she and I drank our tea and watched birds. 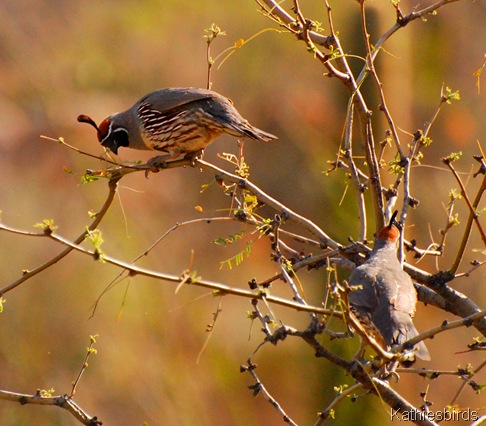 It wasn’t long before a few Gambel’s Quail came around and climbed up into the surrounding mesquite trees. We were not sure if they were gobbling up new green shoots or insects but they were so preoccupied with whatever they were eating that they hardly even noticed us! 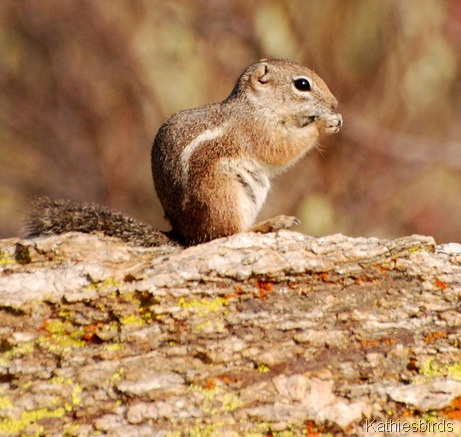 A little antelope Ground Squirrel came around to investigate us as well. 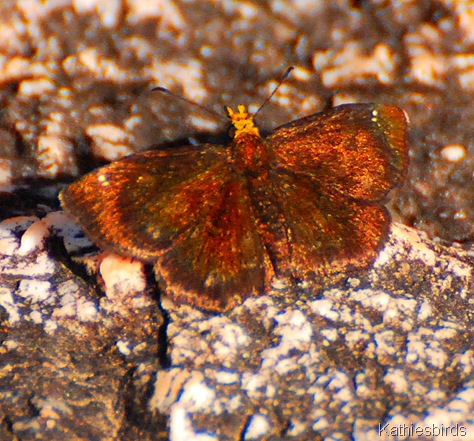 Then Celeste noticed this butterfly! A Golden Headed Scallop Wing!

(Yes, she told me what kind it was! I am a birder; not a butterflier!)

After watching birds here for about an hour we decided to drive the short distance up the road to the freeman Homestead trail. It is a short and pleasant hike in Saguaro national Park with remnants of frontier homesteading. The trail winds down a dirt path to a wash below and I often find many birds along the way.  Celeste and I were engaged in conversation as we walked down the steep incline when suddenly my feet went out from underneath me and I went crashing down with bins, camera and fanny pack. My left leg collapsed under me and took the brunt of the fall, skinning my leg from knee to shin. My left hand went out to brace myself and it ended up with a deep bruise over half the palm area. Though my wrist was sore, amazingly I did not fracture it, but my left knee had a deep gash that was bleeding profusely. 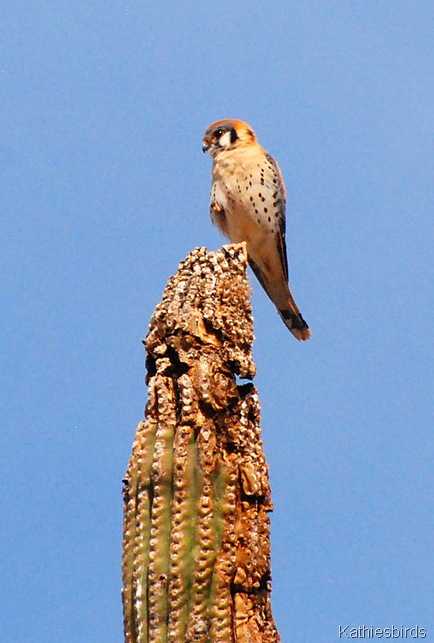 Fortunately I had cotton balls and Band-Aids in my fanny pack. I sat quietly for a few minutes to compose myself and catch my breath. My hand hurt worse than my knee at first and we needed to stop the bleeding. I come from a family of very stoic women who don’t like to make a scene or admit we are in pain, so I tired to downplay it all. I did not want this to ruin our day. After a few minutes and the application of the Band-Aid and a drink of water I got up on my feet again. I tried to figure out why I had fallen in the first place, for I had not tripped. A glance back at the trail revealed a small rock had broken underneath my shoe and set me slipping down onto the hard packed gravel which I could now see deeply imbedded in my skin! At this point it was almost as far to go back as to continue and I didn’t want Celeste to miss out on seeing the wash, so we continued down, with me holding my hand up. As you might imagine, I took very few photos after this. 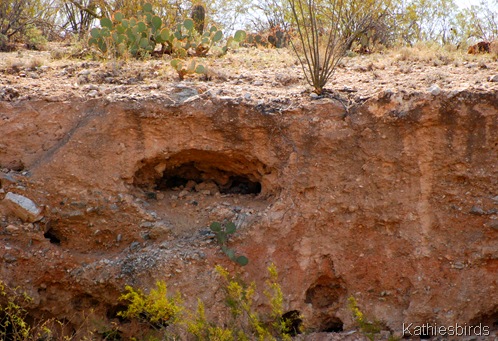 But I couldn’t resist a shot of this hole in the cliff above the wash, which is what I brought Celeste here to see. Look closer…do you see what I see? 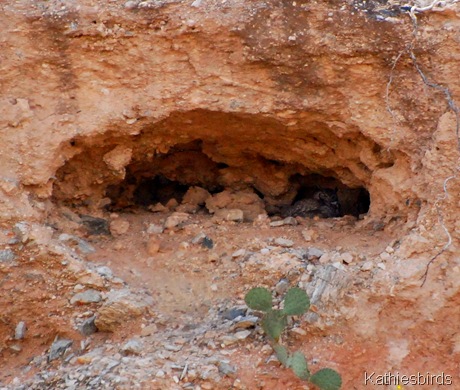 Can you see the Great Horned Owl inside? 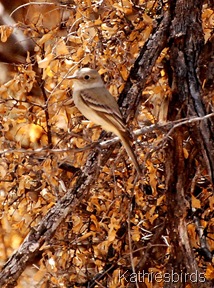 We continued on through the wash watching for birds all the way. We heard Gambel’s Quail and Gila woodpeckers. We saw Cactus wrens, thrashers and flycatchers. The trail wound along the gravelling bottom of the wash, then tuned upwards to the canyon rim again. I think we were both hot, tired and thirsty when we got back to my car. I drove Celeste back to the picnic area to wait for her husband and headed home for a shower and a nap. They next morning I was at the doctor’s office first thing to get a tetanus shot since it had been almost exactly 10 years since I had my last one. The nurse practitioner looked at my wounds and did not even clean them out. She told me to leave them open and un-covered and to not use any antibiotic ointments. Since I do not like drugs, that was fine with me, but the deepest wound was still filled with debris and I was surprised she did not try to clean it. I took care of it myself but eventually it did get infected and I got quite sick. This knee injury laid me up for weeks as it slowly healed. I still have the scars and my knee doesn’t quite work the way it should. I may have to take it back to the doctors after all, but so far I have not let it keep me down and I have still been out birding as much as possible! 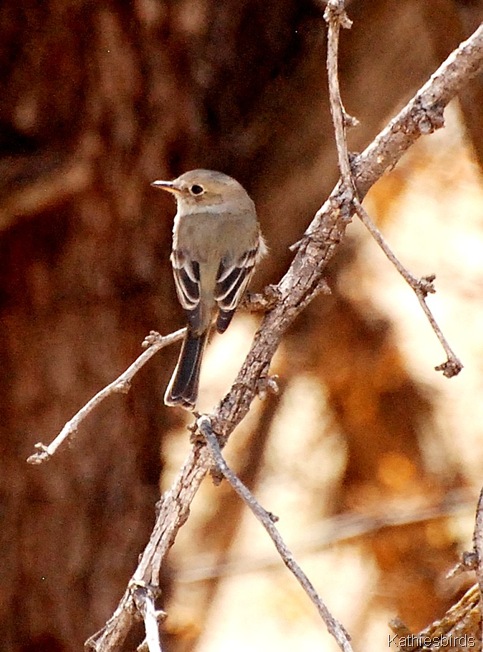 When I was in high school chorus we learned an old folk song I like to sing. I think the name of it is, “Cotton Grows on White Oak Trees.” One line in the song goes:

Slipped on a cowslip down in the meadow, feet went up and I went down! Fell in a hole right up to my middle! Hello Susan Brown!”

Well, you might as well say “Hello Kathie Brown” because these are the words that come to my mind whenever I fall, and they seemed appropriate for the title to this post, with a bit of creative license of course! In spite of the fall, we did get a good bird list. These are the birds we saw on the Freeman Homestead Trail that day: