My Return to Boyce Thompson 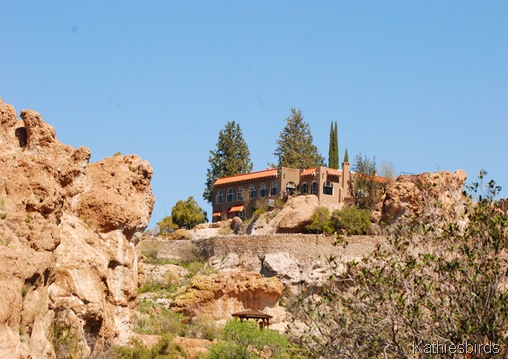 When I lived in Tucson before I use to love to go to Boyce Thompson Arboretum. Since moving back last August I had not been there yet. When Chris Rohrer had a week off in March we made it the first stop on a list of places we wanted to go birding. It was a pleasant drive up through Oro Valley and Florence. We didn’t leave as early as we hoped, and when we stopped to get coffee, well, you know me, I just had to count birds. So it was that we pulled into an already full parking lot around 10 a.m. 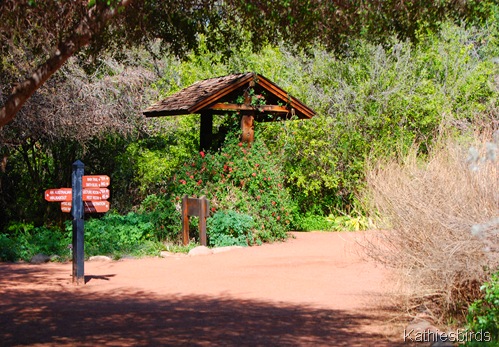 We paid our fee and worked our way through the crowds of tourists and others that were there to buy plants from the annual plant sale. I didn’t remember it being this crowded ever before and hope that the crowds would thin out as we got farther along the trail. We came down the path to a crossroads where there are hummingbird feeders set out--a familiar spot for me, but there were others here as well, walking by, talking or laughing, or asking us what we were seeing and chasing away the birds. 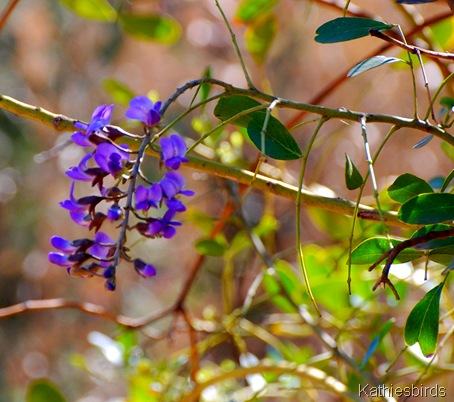 So Chris and I decided to move along the path and see what else we could see. 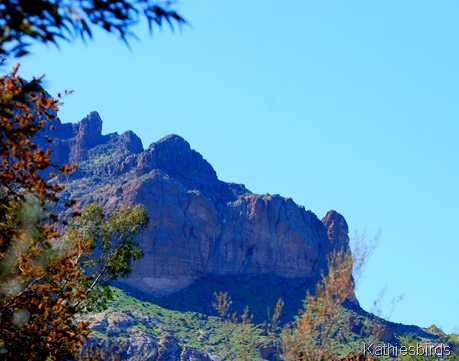 To the south of the park great cliffs rose. A quick scan of the sky revealed Turkey Vultures, red-tailed hawks, and a common black hawk, all riding the thermals as the day warmed up. 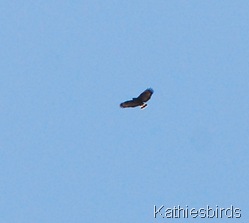 We walked further along the trail, but it seemed there were people everywhere. We found a few hummingbirds, then a Lucy’s Warbler and a Warbling Vireo. As we crossed a wash we also found a Hutton’s Vireo. From the cloudless sky the sun blazed down on us. We kept on walking. Soon a voice boomed over the park as a guide led a group of 20 to 30 people past us on a tour. Chris and I tried to escape but it seemed there were people everywhere, and there were certainly more people than birds! 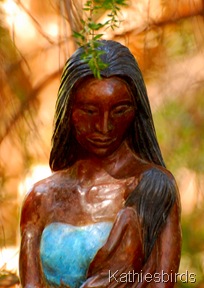 With the sun already blazing I tried to keep in the shade as much as possible. Under one tree in the shade I found this wonderful sculpture of a Madonna and child. As a mom myself, I always love Madonna sculptures. Seeing this one here in the park made me think of my relationship to the earth, and how often we call nature “mother.” As a child growing up I know I often ran to the woods or the fields for comfort and nature was indeed a mother to me, so you can imagine that I really liked this sculpture. It strikes me that her skin is the color of earth and her dress the color of the Arizona sky! I was seeking this comforting and tranquil relationship with nature today, but unfortunately I was not finding it at Boyce Thompson. While I was bemoaning the crowds, Chris has other things on his mind. As usual, before we left, Chris had done his research. Having scouted out what rarities were being seen in the area, he was on the hunt for the Williamson’s Sapsuckers that had been reported in the area. We now headed into the Australian Forest area of the arboretum. Tall eucalyptus trees towered overhead, along with Australian Pine trees and palms. We found a group of other birders with binoculars, spotting scopes and cameras all searching for the same thing. This kind of situation makes me want to flee, but Chris was on the hunt. He is a much more sociable person than I am, so he went and chatted up the other birders while I hung back. It paid off, because soon someone spotted the bird. Chris motioned me over and soon a small group of us were craning our necks looking up to the top of a tall pine tree. There in the shadow was our quarry, but the distance up the tree and the shade made photographing it very difficult. 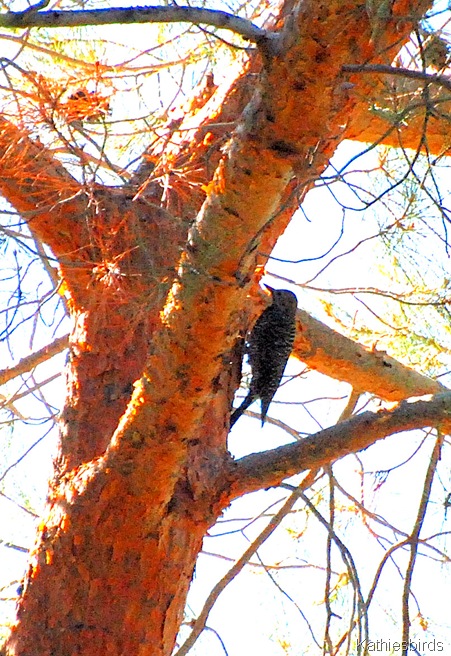 While it wasn’t the flashy male everyone was hoping for, it was still the desired species and for Chris, it was a Life Bird, which made the whole trip worth it! While I had seen this species before in Colorado back in the 1990’s, this was my first sighting of it in Arizona! Good for both of us! 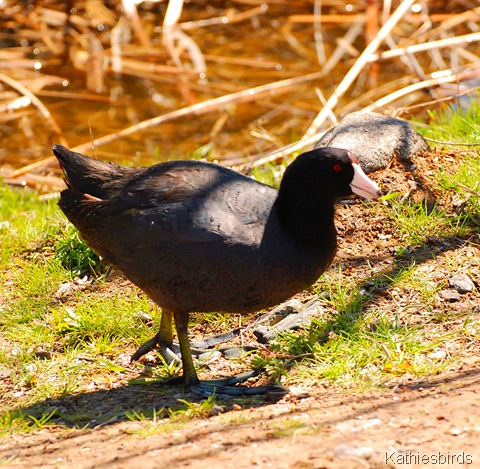 We soon left those birders behind and continued along the trail to the lake. by now the sun was high in the sky and there weren’t many birds in the lake, but we did manage to see a coot and a cormorant. another large tour group was walking by, so we stepped into a shady alcove and waited for them to get further up the trail. finally we decided it was now or never and we followed the trail upwards through the rocky desert. 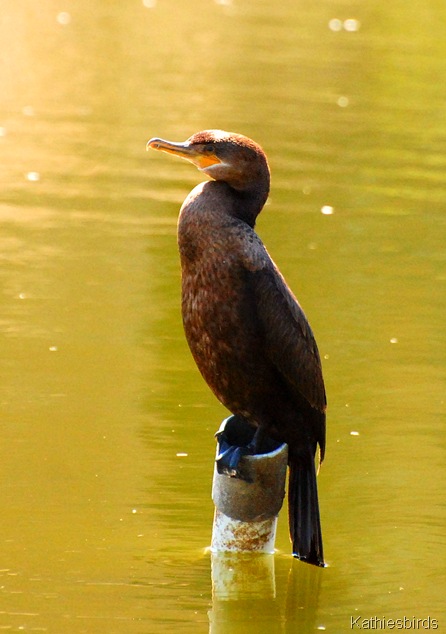 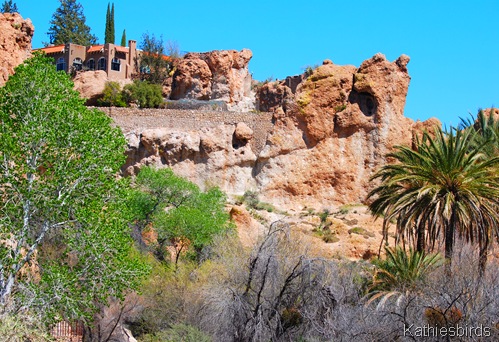 Here the trail ambled past the red rock cliff where Boyce Thompson's house was set as if embedded into the rock. A few swallows and swifts circled overhead. Lizards scampered across our path as we headed down to the riparian area along the creek. I find it such an interesting mixture of vegetation with palm trees and cottonwoods along with mesquite and cacti. It’s such a pretty setting. I could see why someone would want to build their house here. 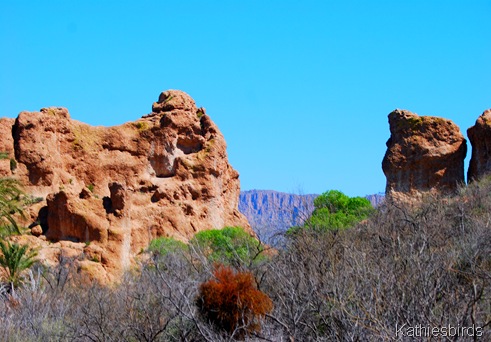 Down along the creek we rambled, with me ducking into the shade whenever I could. I guess after living in Massachusetts for two years I got use to trees and shade again. Suddenly Chris and I saw a red bird in one of the trees that we hoped was a hepatic or summer tanager, but as Chris grabbed his camera and I lifted my bins yet another person came running and chatting noisily along the path and scared the bird off across the creek where it was lost to our view in the deep vegetation. We threw in the towel then and headed back towards the main building but as we came to the suspension bridge we decided to cross it and follow the steep but un-crowded cliff trail. It paid off with us finding a few more bird species that we had not seen in the rest of the park, but we were certainly hot and tired by the time we got back! 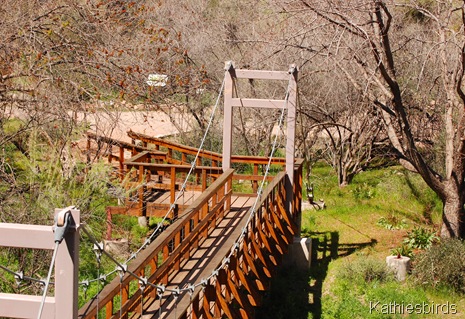 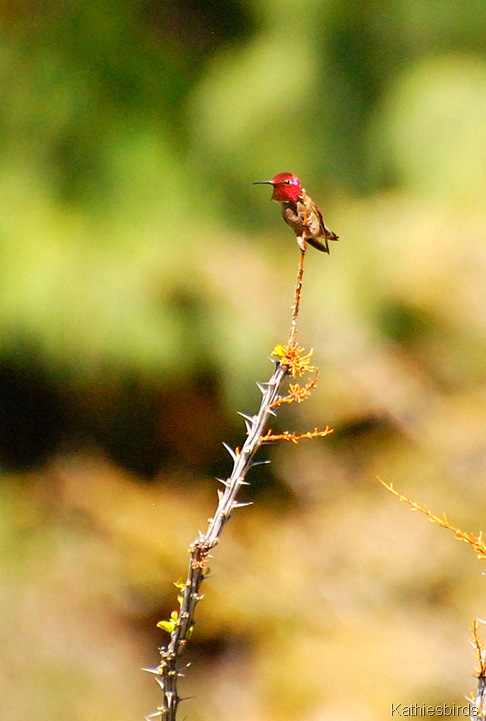 My impression of being here today was one of being hot and being crowded. I could not wait to get out of this place. Boyce Thompson is not always like this. I am sure it had to do with the time of year, and our late arrival. Lesson learned. Get up earlier and don’t stop to count birds at coffee shops! But this was not the end of our birding adventures on this day. I had big plans to drive to Roosevelt lake to count birds, so instead of heading south towards home, Chris and I pulled out of the parking lot and headed west and north. If we got there, it would be Chris’ first bird count in Gila County! 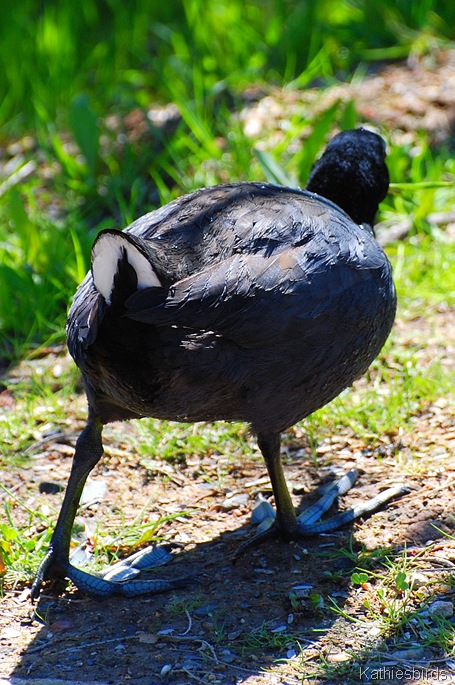 We walked approximately 1 mile and counted birds for 3.50 hours.