Birding in the Wasatch Mountains 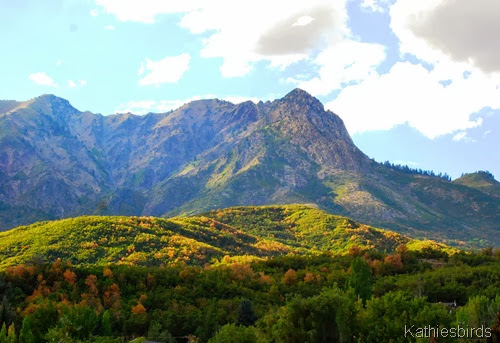 When Gus and I took a recent trip back to Utah it was our first time being there since we moved to Tucson in 2007. I wondered how it would look, and how much I would remember, and how many birds I would see. You see, I was just a beginning birder when we lived in Utah. before that I would say that I was a bird watcher. While living in Utah I learned about the Great Backyard Bird Count and Project Feeder Watch. It was while living in Utah that I first started keeping bird lists and going out on purpose to find, identify and count birds. Little did I know then that I would also discover that an acquaintance from church would become my good friend and my first birding buddy! 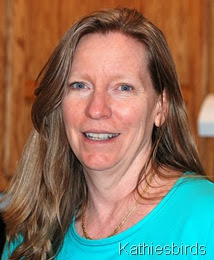 I knew Kathryn for over six years before I discovered that we both liked birds. It was about a year before I moved to Utah that she and I started birding together and we made a few trips to areas around the Great Salt Lake like The Bear River Migratory Bird Refuge, Farmington Bay Wildlife Refuge, and Antelope Island. Once my husband and I moved to Arizona Kathryn came to visit and we birded like crazy all over the southeast part of the state. When I moved to Massachusetts Kathryn came to visit me there and I showed her the birds of New England. Kathryn is a good friend and a good driver, so, when we decided to move back to Tucson and I needed someone to drive across the country with me and my pets, she was my first choice. We birded our way across America, and when we got to her hometown in Texas she was the one showing me around. Now, on this trip, one of the things I looked forward to the most was going birding with Kathryn! 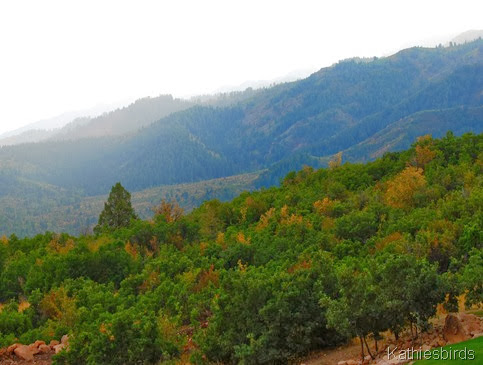 Of course we counted birds in her yard and in her neighborhood, but finally the day arrived for us to go out birding together for the whole day! We both abandoned our husbands, packed the car with food and water and set off. We had discussed several times where we should go on this Friday, our last day there. With Gus and I taking our trip to Yellowstone right in the middle of the week it limited the number of free days for birding. Tomorrow we would be leaving for Tucson once again, but today, September 13th, was all ours! While we could have gone back to the Bear River Migratory Bird Refuge or any of our former birding haunts, we decided to head east and bird in Morgan, Henefer, and along the I-80 corridor until we reached Evanston, Wyoming and Bear River State Park. 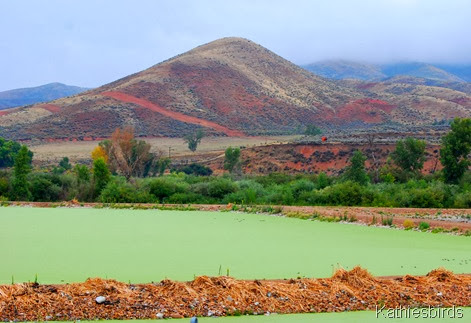 Clouds and fog blanketed the mountains and a light rain had started as we headed east. Our first stop was in the town of Morgan and by the time we pulled into the parking lot of the Morgan Town Park a steady rain was falling. Not wanting to damage my camera, I left it in the car as we walked around the park and counted birds. The rain lightened up and stopped for awhile and we found a few warblers along the Weber River but by the time we headed back to the car a steady rain was falling once again. We headed further down the road and stopped at a different location along the Weber River with such steady rain we saw few birds, but a stop at the Henefer Ponds proved much more successful. 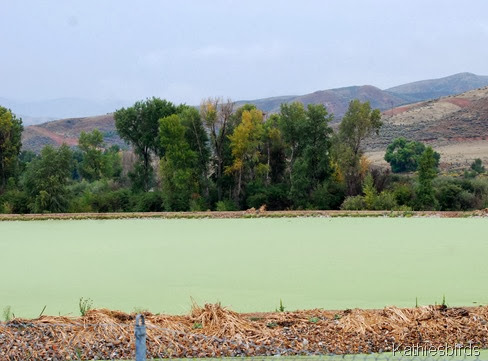 At first we didn’t see much in the flat gray light. A green film covered the ponds like a silk blanket. But then we spotted a few dark spots in the corner of the green, so we got out and while Kathryn set up her spotting scope, I scanned the water with my binoculars. first I spotted a few mallards and a coot, and then I found the grebes! A small flock of Horned Grebes clustered in the corner and swimming with them I found a Wilson's Phalarope! 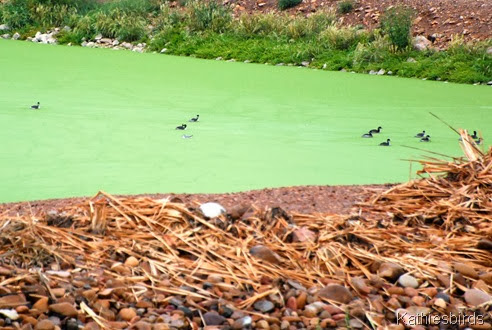 Can you see the tiny pale gray and white bird in the center of the photo? 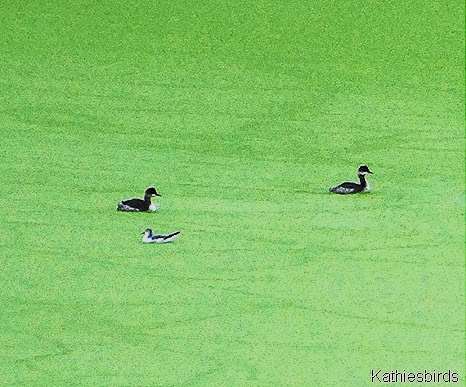 Here’s a close-up of the phalarope with two of the grebes!

While the weather was not perfect for birding, I found the coolness and the grayness almost a relief after the heat of our desert sun in Arizona. 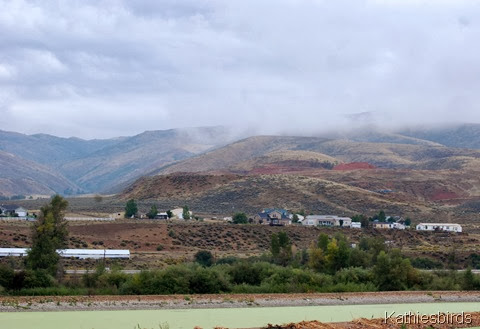 From our location on the south side of the valley I looked across to the north rim where houses lined the benches and cars rushed by on the highway oblivious to the birds and the spectacle of migration that was happening all around them. It turned out to be advantageous that Kathryn and I continued to head east. As we did the skies cleared and we had a wonderful time birding at Bear River State Park. Kathryn had never been there and I had never officially eBirded there, having only submitted a couple of Incidental Observations of birds I had seen there before. I was looking forward to submitting an effort-based bird count. I was looking forward to seeing this wonderful park once again. That story is coming up soon. 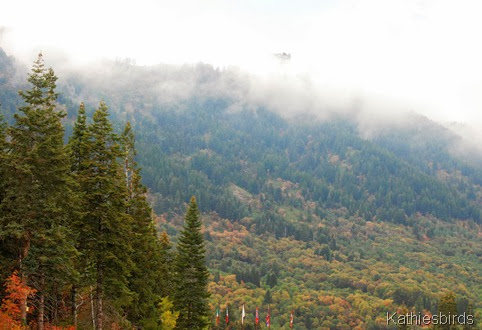 After birding for over 3 hours in Wyoming Kathryn and I came over Monte Cristo pass and Trappers Ridge back towards her home in Mountain Green. On our way we made one last stop and drove up the road to Snow Basin to see what we could see. At first there wasn’t much but clouds and trees, and few barn swallows swooping around the buildings near the parking lot, but then, as we were heading back down the road we saw some activity alongside and pulled off to park. Though we did a travelling count of 3 miles, most of the birds were seen in this one little area just east of the parking lot. 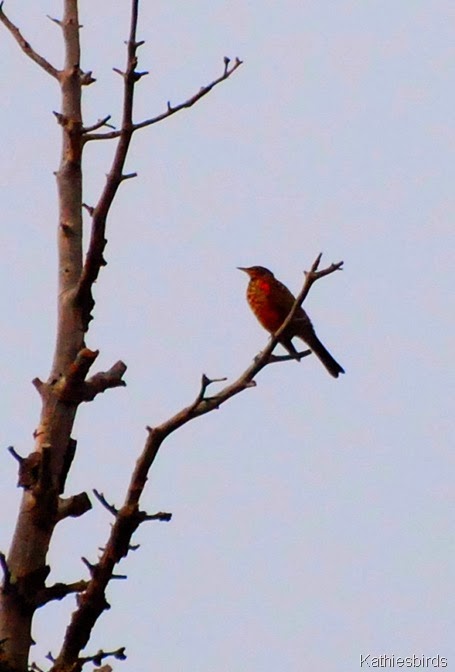 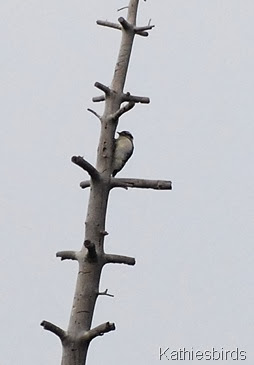 Here we found a Dark-eyed Junco, a single American Robin, 3 Downy Woodpeckers,  2 Northern Flickers and then, we found a Hairy Woodpecker! Mixed in with all of these birds were both Mountain and Black-capped Chickadees, 2 Red-breasted Nuthatches and 10 chipping Sparrows! All in all we counted 10 species of birds on the road to Snow Basin! I stayed up late into the night submitting all my bird counts to eBird and woke up crabby in the morning. I was so tired and so sad to leave my friend and Utah, but it was time to go. The week flew by and I knew we would have a long drive back to Tucson. With Highway 89 washed out between Page, AZ and Flagstaff, Gus and I decided to drive home through Las Vegas instead since it would be highway all the way. After my morning coffee and something to eat I was in much better spirits as we headed south. Of course, with Gus driving, I kept my eyes open and counted birds all along the way! Below you will find a list of the birds seen in the Wasatch Mountains.

Note: One of the most surprising things to me about birding in the Wasatch Mountains was the presence of Eurasian Collared-doves. I saw them every day in Kathryn's yard and neighborhood and in other areas around Utah. This species of bird was not here when I lived here before but has moved into the area since I moved away in 2007! 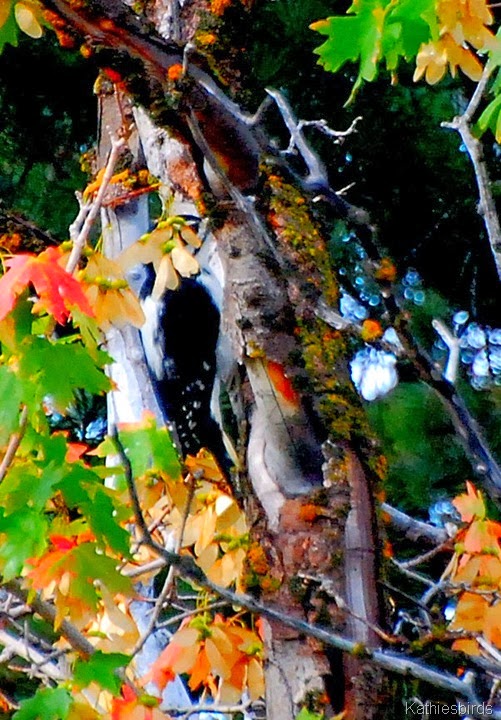 Do you see the Hairy Woodpecker Hiding?