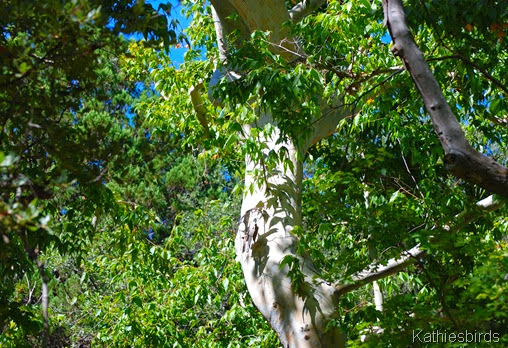 On a sunny day late in September I took my friend, Celeste to Ramsey Canyon. She had never been there and I had not been in awhile. With temperatures still near 100F in Tucson, a trip to the cool canyon would be a pleasant relief. I always like to see the Sycamore shaded creek that tumbles out of the Huachuca Mountains and the birds and wildlife that it attracts. The broad-leafed sycamores remind me of the tall and wide-leafed maples of New England where I grew up. 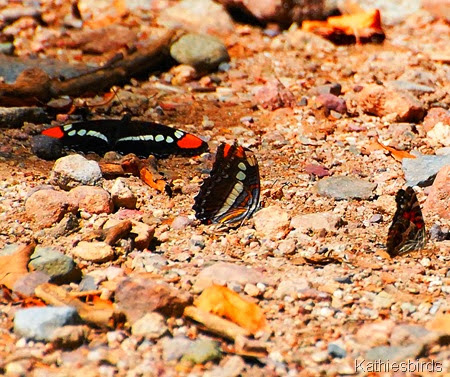 We were hearing birds as soon as we parked the car. After paying our fee at the visitor center we headed up the shaded trail. Partway up we stopped to watch a collection of butterflies sipping moisture from the sandy path. We looked and listened for birds and found a couple of Ruby-crowned kinglets, Mexican jays, and Painted redstarts. The resident Wild turkeys made their appearance and wandered along the path next to us. Farther up the canyon we sat on a bench and watched and listened. It paid off when we found Bridled Titmice, a White-breasted Nuthatch and Hepatic Tanagers. As we started down the other side of the canyon we came upon a little pool where leopard frogs were making their recovery in the canyon. 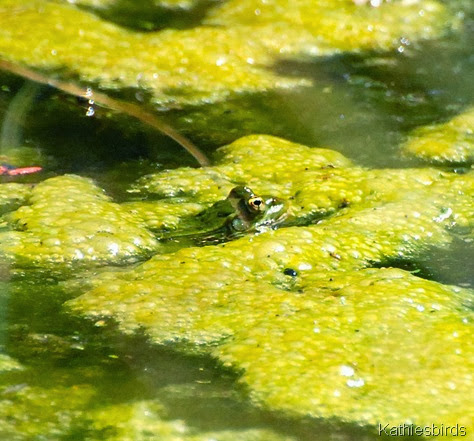 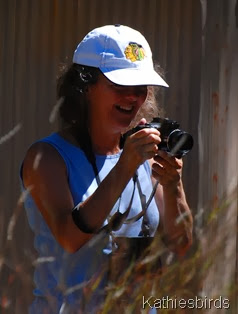 Celeste was all smiles and she snapped pictures of the frog. As a former guide in Africa, Celeste loves all wildlife! Last year when I first moved back here to Tucson she and I went hiking in Madera Canyon where we encountered a black bear on the Proctor Road Trail. Instead of being afraid, she was overjoyed! Celeste is also a certified rattlesnake handler! Though small in stature, she has the heart and courage of a lion. When we are together we are a perfect match in our love of nature and our ability to be quiet and observe.

So it was that we were walking quietly down the trail when I saw two birds in a dead sang overhead. By now the sun had risen high in the clear 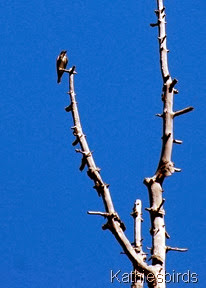 blue sky, reflecting off the silvery bark of the dead trees. I almost could not believe my eyes when I saw the gray flycatcher with the little vest. It was my first observation of an Olive-sided Flycatcher since my return to Arizona and my first of this year. Celeste had never seen one, so it was a Life Bird for her. Olive-sided flycatcher live at high elevations and are most often identified by the appearance of what looks like a little gray vest. There is a close-up of the bird in the photo below. The interesting thing was that in the other side of the same tree was a Northern Beardless Tyrannulet! 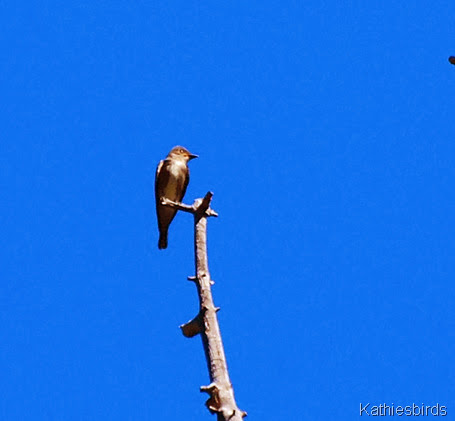 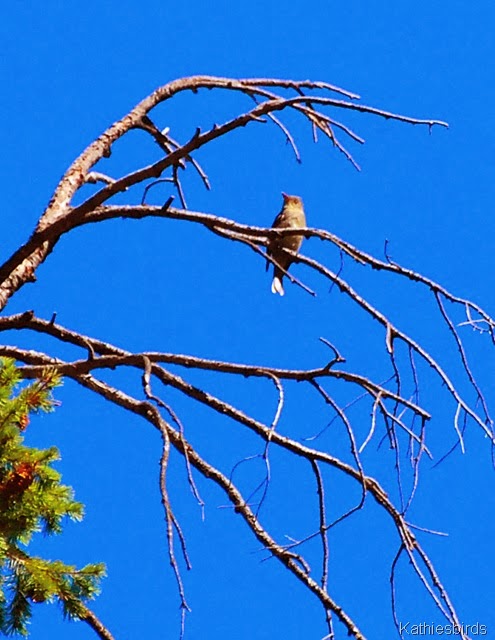 I had recently seen my first Tyrannulet at Agua Caliente Park. I was surprised to see one again so soon and pleased that I was able to identify and show it Celeste, another Life Bird for her! It was only my second sighting and my first in Cochise County. If you look closely at the photo you can see its large pink bill, a feature that really stood out to me both time I saw this species. 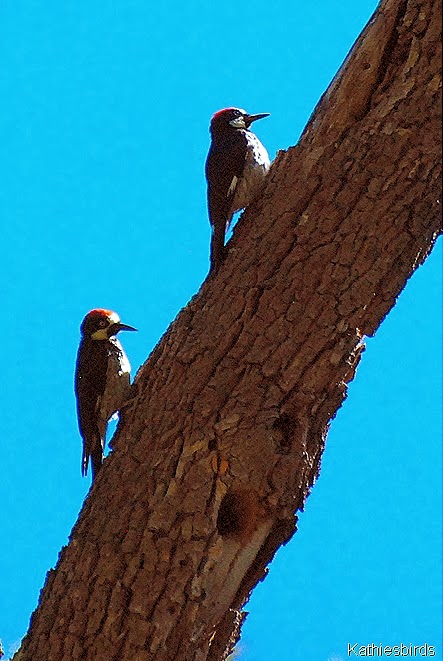 Acorn Woodpeckers are common in the canyons of Southeast Arizona and we watched this pair alongside the trail for a few minutes. We were part way down the canyon when we started to cross the creek on a little wooden bridge. Before us an Arizona woodpecker clung to a tree. I was pointing it out to Celeste when another little bird caught my eye in some nearby willows. I was trying to focus in on the little Hutton’s Vireo when everything became a blur as Celeste started beating on my arm in excitement! 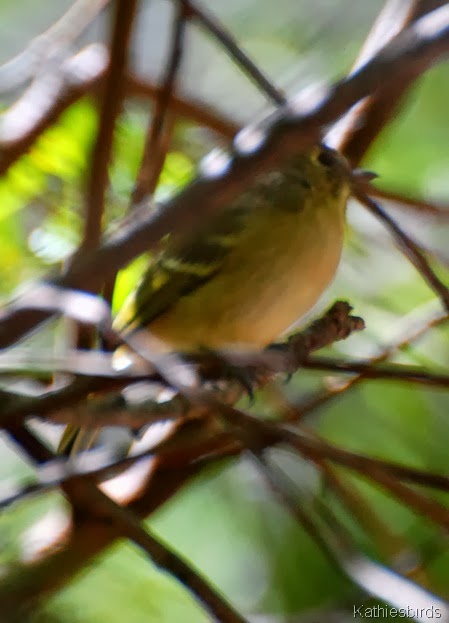 As Celeste stood there open mouthed and speechless she pointed to an animal running down the hill towards the creek. She was too frozen with excitement to take a photo, so I raised my camera and snapped off a couple shots before the animal disappeared up the opposite bank and into the woods. Ever since I saw a White-nosed Coati in Madera Canyon with my friend Chris Rohrer she has wanted to see one. I have never seen one here before myself so it was quite a surprise and quite a thrill for us both. I now think of it as her coati! 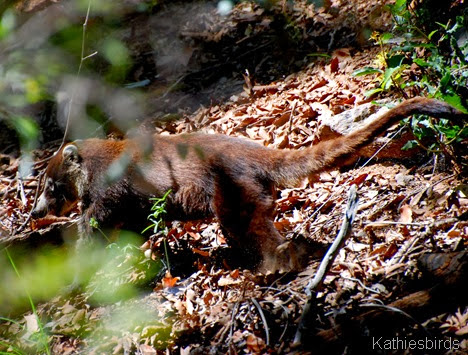 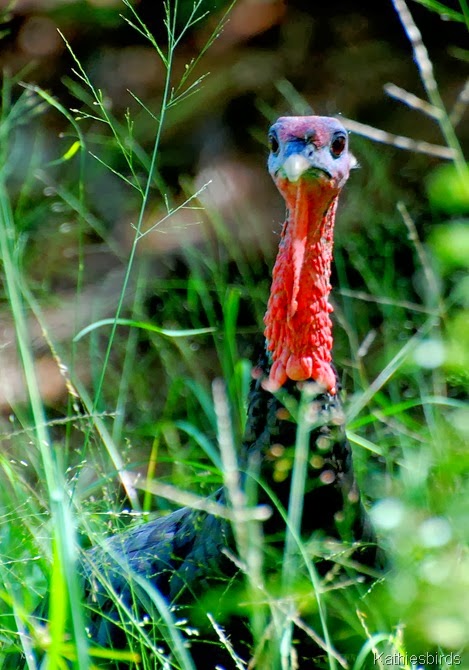 On the same bank where the coati ran by the flock of wild turkeys was settling in for an afternoon nap. This one poked its head up as if to ask what all the ruckus was about! 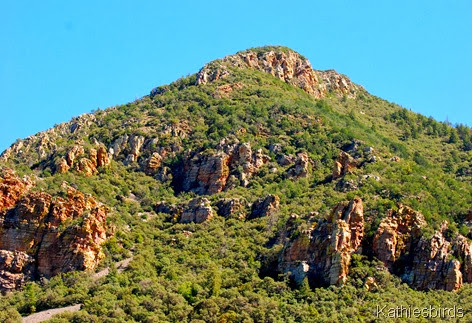 As we continued our walk down past the high rocky rims of the canyon I pondered all the birds we had seen. Most of them were the Arizona specialties that so many people travel to Southeast Arizona to see, and here we had seen them all in one morning! It was a quiet day at Ramsey Canyon with few visitors, so Celeste and I had the canyon mostly to ourselves. 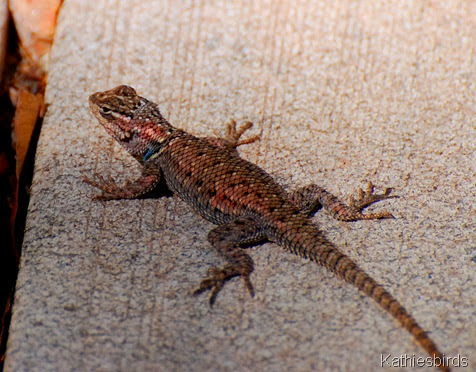 As we walked back to the visitor's center we checked the scattered hummingbird feeders along the trail but did not see any hummingbirds hanging around. However, a few spiny lizards clung to the building as we walked by. We crossed through to the parking lot and sat at the lone picnic table in the middle of the parking lot to eat our lunch. while we munched and talked about the day’s events suddenly a sparrow landed on the nearby rope fence with a large insect in its bill! of course we both stopped eating and grabbed our binoculars and cameras. I could not believe my eyes when I saw the rufous cap and prominent eye ring of a Rufous-capped Sparrow! it soon became apparent that there was a pair of them and though it was late in the season they appeared to be feeding young as they took turns flying past us to a spot where these bees or wasps were near the building. they would fly past us, catch an insect, then fly back past us to the diagonal corner of the parking lot and disappear briefly before retuning to the task once again. 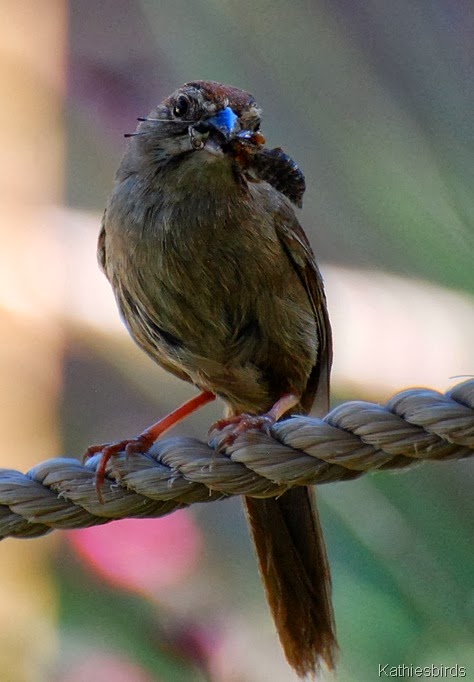 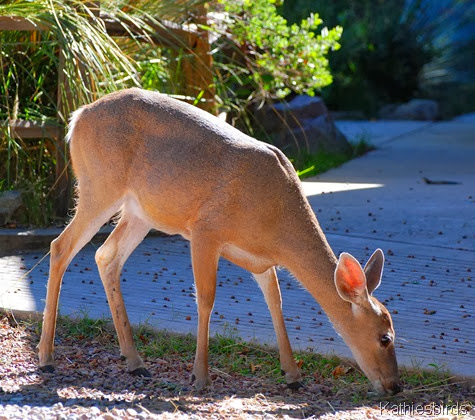 Our picnic lunch turned even more surprising when a Coues White-tailed Deer wander up out of the creek area and crossed in front of the visitor’s center to nibble on the mast scattered over the area. She stayed here the rest of the time and we did not disturb her as we packed up our picnic and got back into our car. By now it was late afternoon and we knew we should head home, but there was one more place I wanted to show Celeste, so we headed over to Ash Canyon where Mary Jo keeps bird feeders filled for birders to come and enjoy her birds. We paid the small $5.00 fee and sat and watched as hummingbirds buzzed around our heads. we searched and searched for the Lucifer’s Hummingbird, but never saw it. 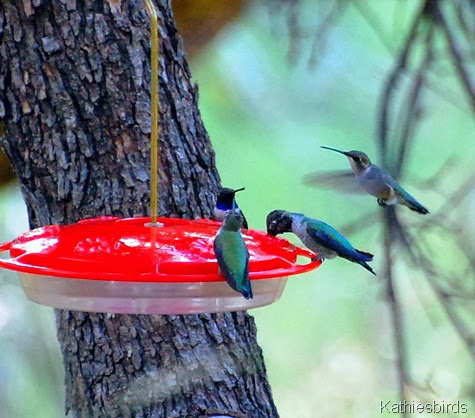 It was so peaceful and relaxing to just sit and watch the birds and there were plenty of other species to see, so as the light dimmed to a gray-green we took it all in. After being there for about an hour, during which time Mary Jo came out to join us, we finally had to pack it in and say good-bye. It was a full day of birding and long after dark by the time we got back to Tucson, but well worth the trip which was full of surprises! 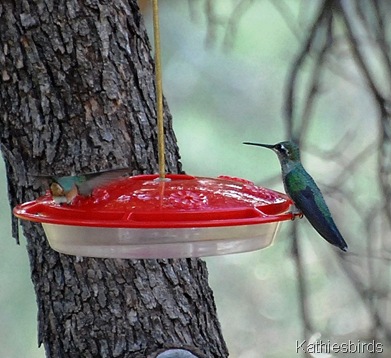