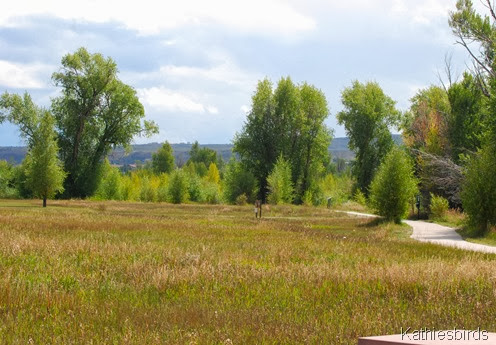 On a rainy day in September my friend, Kathryn and I headed east out of Utah on I-80 to Bear River State park in Evanston, Wyoming. It is only about an hour’s drive east of Layton and was one of my favorite places to go when I lived in that area years ago. The park is located just off the highway at exit 6. With restrooms, picnic tables, a visitor’s center and trails, it is the perfect place to go birding and have a picnic. Since it is right at the edge of town, you can stop there to pick up any necessary supplies as well. Or, if you are just passing through, it makes a great place to pull off and take a break and see some birds. 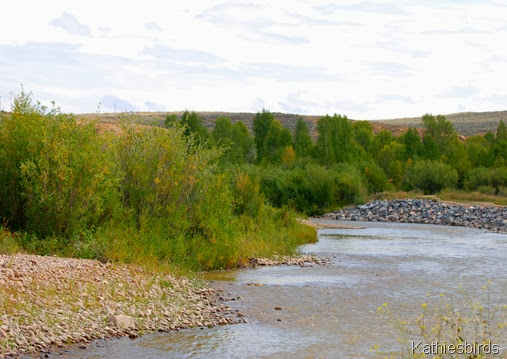 With the Bear River flowing right through the middle of the park there are lush riparian areas with willows and cottonwoods. I have seen everything from flycatchers to warblers to gulls and shorebirds here. Often there are hawks and vultures circling overhead. In the summer swallows swoop over the river and parts of the river are even deep enough to swim in! I brought my own kids here to swim back in the early 2000’s when some of them were still living at home. 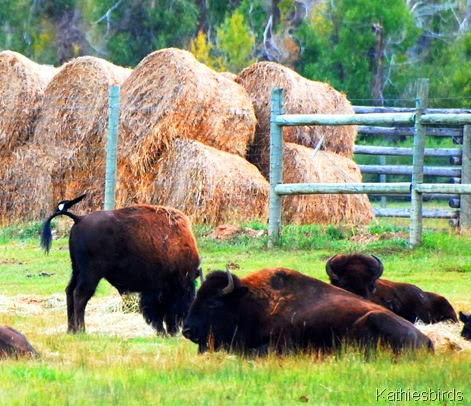 As soon as you enter the park there are a couple of ponds and a fenced off area where they keep a few bison or elks on display. If you look closely at this picture you can see a magpie using the bison’s tail as a perch! But Kathryn and I were not here to see bison, though we did spot a few bird species in these pens! 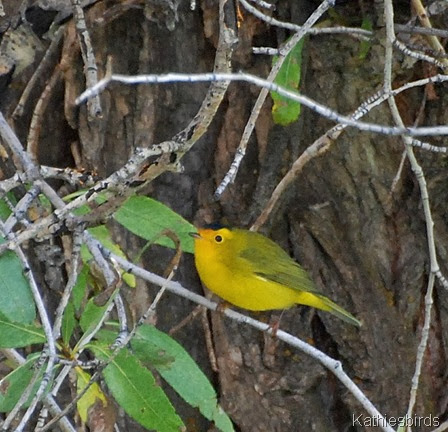 A cold wind was gusting when we first arrived and the clouds that had started to break up were thickening into a gray menace once again. For a few minutes the temperature dropped even lower and I was glad of my knit gloves in my coat pockets. I wanted to leave the coat in the car so I could travel lighter, but it was too chilly. So, we set off down the trail and started counting birds. We were soon to discover that Wilson’s Warblers were everywhere. We counted them on both sides of the river and all along the trail. wherever we went. 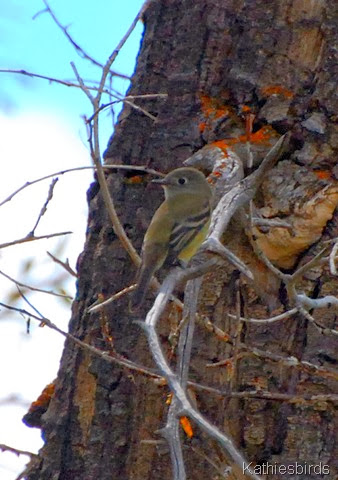 Various kinds of flycatchers were flitting about in the trees and willows and I found myself challenged to identify them all. 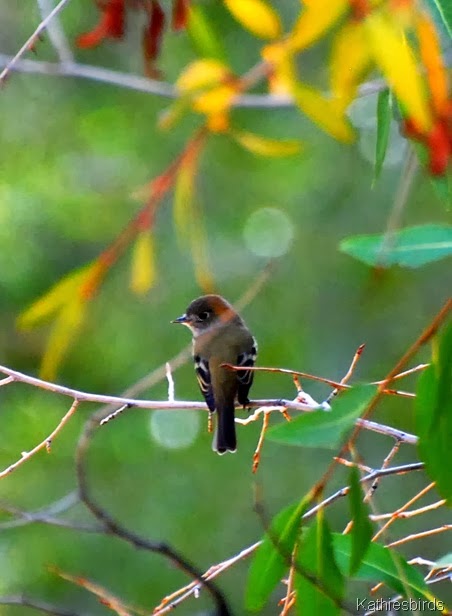 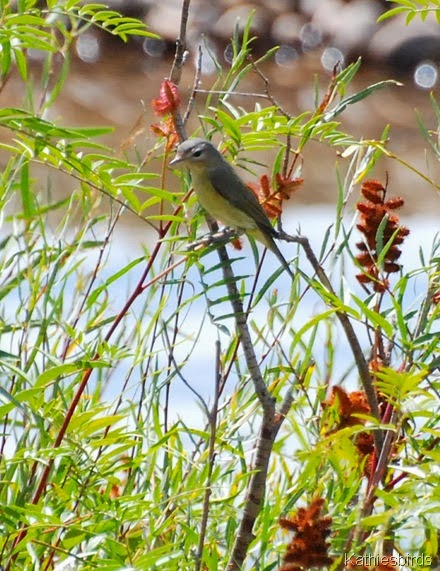 I had no trouble identifying this Warbling Vireo however! 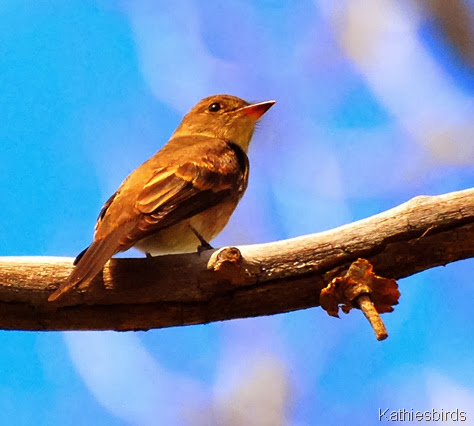 And I believe this is a Willow Flycatcher due to it’s broad-based bill with the orange lower mandible.

Kathryn and I crossed a rickety old bridge to the opposite side of the river where the trail meandered through a forested area and back along the banks of the river. We only encountered a few other people and were mostly left to ourselves. The sun broke through the clouds once again raising the temperature enough so that I removed my gloves and tied my coat around my waist. With coat, camera, binoculars, fanny pack and water I was lugging enough stuff that I should have lost 5 pounds that day! 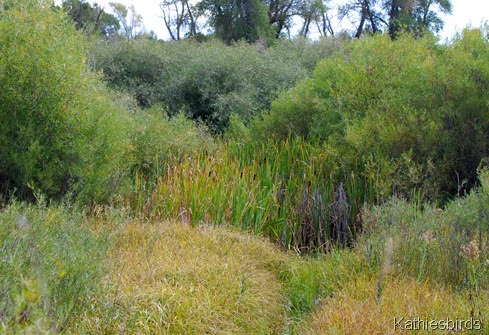 We looked for more warblers in this willow and cattail patch. Beyond us the sagebrush-covered red foothills rose in contrast to the lush river greenery. And while the air was warming, the wind kept on blowing and gusting. 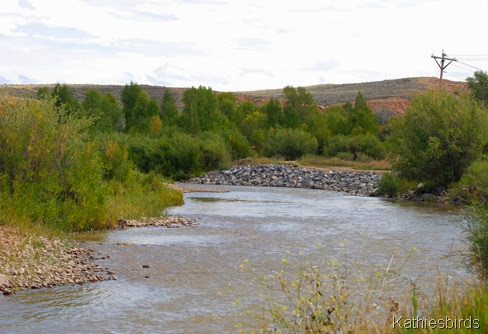 The Bear River starts in the high Uinta’s of Utah then wanders its way 491 miles through Wyoming and Idaho, then back into Utah and where its delta forms the Bear River Migratory Bird Refuge near Brigham, UT before flowing into the rest of the Great Salt Lake! 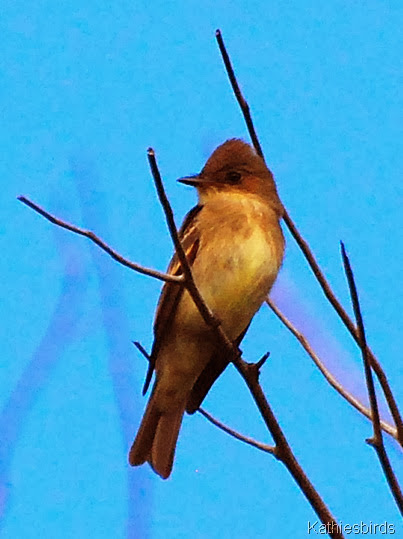 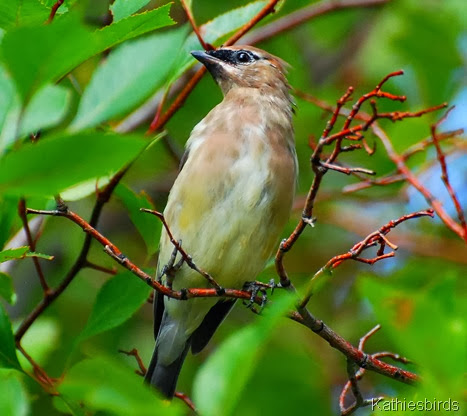 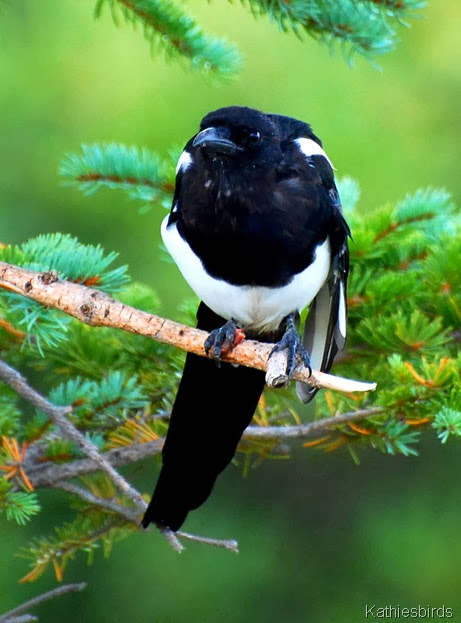 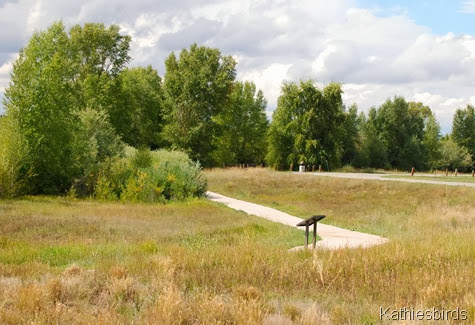 Kathryn and I spent over 3 hours hiking along the trails at Bear River State Park before hunger drove us back to our car where we had food for a picnic. We found a picnic table we liked and sat there talking and eating with our eyes and ears open, always on the lookout for more birds. 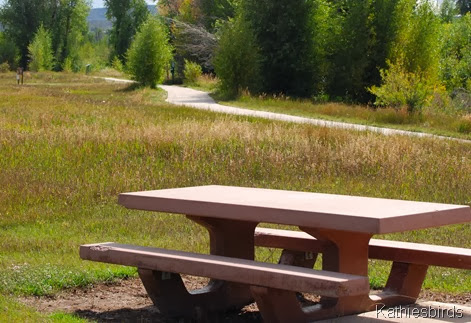 While I knew that we had only seen a small park of the park the time was getting late and we had to be back to Utah in time for Gus and I to visit our former neighbors in Clearfield one last time. So, though I would have loved to explore Bear River State Park longer, it was time to go. As an eBirder, I love birding places that few other people bird because I know how important getting data from those locations is. As a person I just love to explore new areas, but for me, this was a return to a place I loved and it was so much fun to see it again and show it to my friend, Kathryn. If I am ever out this way again, I will certainly stop to visit this spot, which feels like an old friend! Besides, who doesn’t like having magpies for company while you eat lunch! 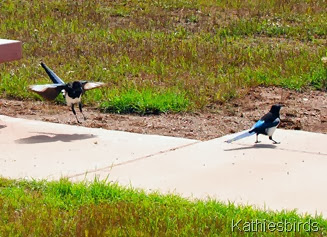 Notes: Before this trip to Yellowstone and Evanston I only had 21 species of birds on my Wyoming Life List. With the birds seen on this trip from both locations I now have 58 species of birds in Wyoming! Hopefully one day I can go back and make it to the 100 species mark for this state! I currently have over 100 species in only 6 states: AZ, MA, UT, CT, ME, WV! Arizona is the only state that I have over 200 species in and at 299 I am just one species away from having 300 species on my AZ Life List! (This information was edited on 11-15-13 to include the Hammond’s Flycatcher which was unidentified when this post was first written.)