Another Walk Along the Androscoggin in Spring 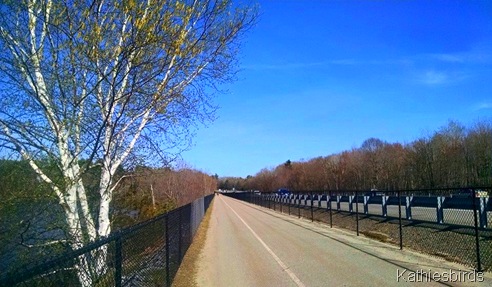 May 8, 2015: After writing last week’s post I decided to take another walk along the Androscoggin River Bicycle Path with Gus on Friday afternoon. We decided to start from the north end of the trail, which has a parking lot off of Grove Street near Cook’s Corner. The trail itself is just over 2 1/2 miles and runs from Water Street at the south end in Brunswick, to Grove Street at the north. Parts of the trail run right alongside Route 1 and in the photo above you can see how it is squeezed between the highway and the river. It certainly has changed since the snowy pictures in the post below this! 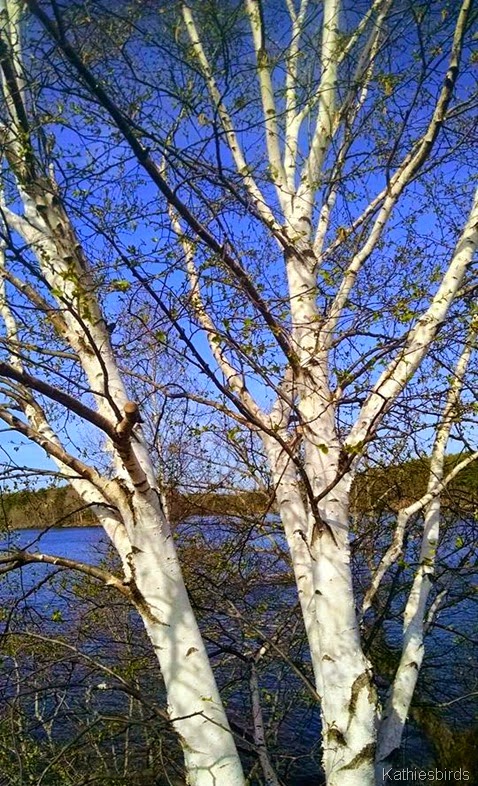 It was a gorgeous day for a walk and it felt so good to get out in the spring air and sunshine. It felt good to walk and move my limbs and my body. I did not bring my Nikon, but simply enjoyed the birds and my husband’s company. I did not see many birds at first, but it became more active as the afternoon waned and drifted towards evening and sunset. At first, the only bird I saw was a small brown thrush-like bird is a wooded section of the trail just after we crossed the pedestrian bridge at the north end. The bird was in the shade alongside the trail and at first I thought it might be a robin. However, once I looked at it through my bins I could tell it was not a robin, even though it was backlit and its back was to me. I knew then it was another of the thrushes, but I needed to see the head and chest to figure out it it was a Hermit Thrush or a Swainson’s Thrush. I made Gus stop on the trail while I tried to creep closer for a better look in better light. Suddenly Gus warned me there were other pedestrians coming and they weren’t stopping! Just then the bird got into a patch of sunlight and turned 3/4 of the way towards me and I could see it was a Veery! It was rusty brown above with no contrast between the tail and back and no eye ring or “spectacles.” The faint spots were limited to the upper breast, unlike the other thrushes. I have only seen a Veery out in the open once before! Dang, how I wished I had my camera now! 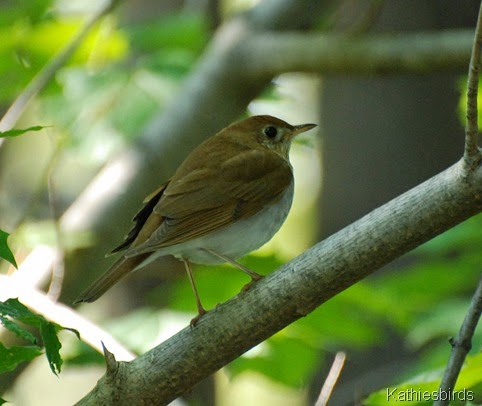 You can tell the Veery is quite different than the Wood thrush and Hermit Thrush pictured below. 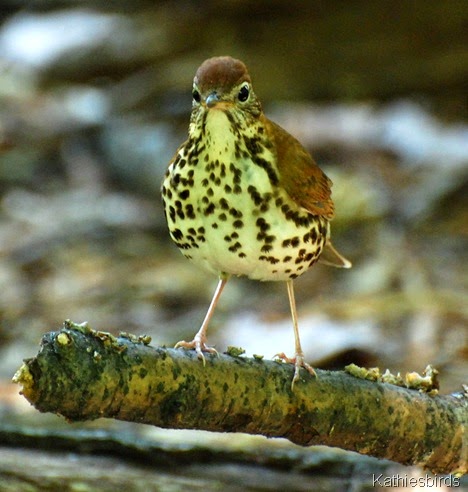 Note the large, dark spots covering the breast and belly. 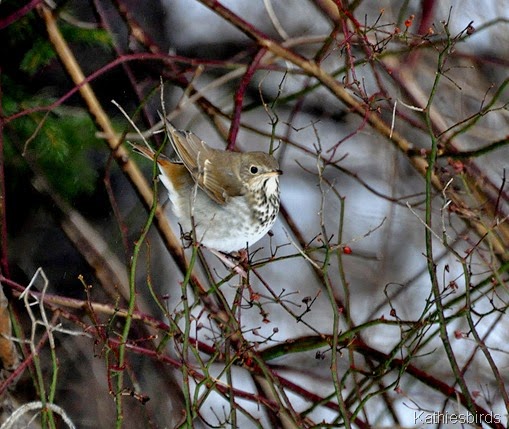 Hermit Thrush in my Brunswick backyard this winter 1-18-15

Note the contrasting rufous tail with the olive colored back and the dark spots limited to the upper breast. Note also the complete and obvious eye-ring. 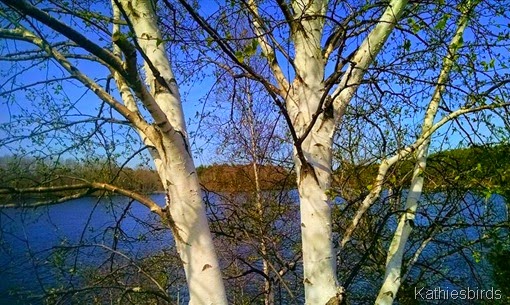 While many of the trees were still without leaves, or just blooming with their tiny spring flowers, the white bark of this silver birch was so striking against the blue sky and blue river! I just had to stop and admire it! 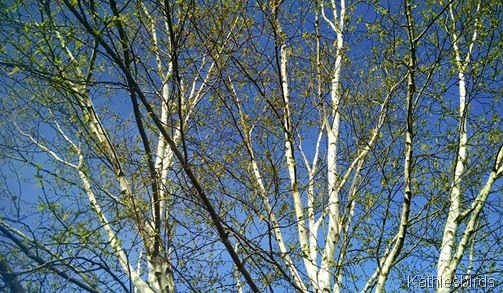 Blue Skies between the branches of a silver birch! 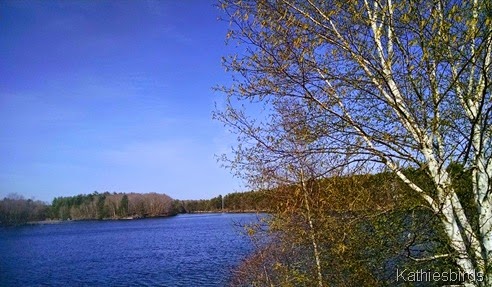 While we were standing at this bend in the river, we observed several osprey fishing in the cold, rushing water. I was amazed at their ability to plunge into the cold depths and come of with wet wings and a fish and start flying again. sometimes I would see them struggle to reposition the fish before gaining control and flying off to feed. At one point I saw all 5 osprey at the same time!  Initially, when I saw one osprey catch a fish and fly off across the highway to the east, suddenly a Bald Eagle appeared out of nowhere and went in hot pursuit of the osprey! I could tell it wanted to steal the fish, but I never saw how that contest turned out as the birds flew out of sight beyond the trees. 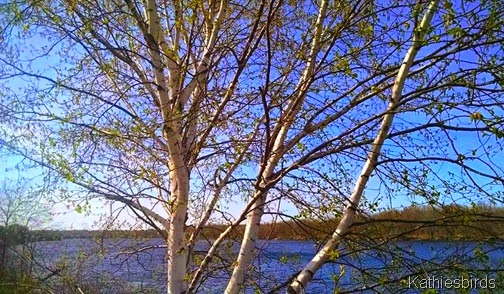 I just loved the view of the river through the branches of this birch tree! 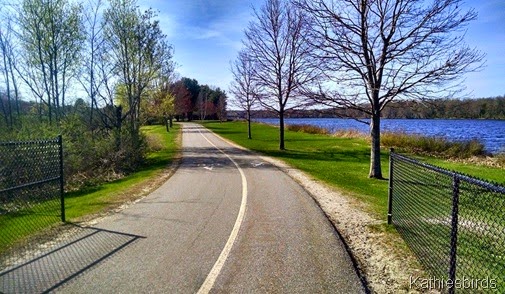 By the time we had reached this section of the trail we had walked over 1 1/2 miles. We walked just as far as that bunch of pine trees there and I counted several Savannah and Song sparrows in this grassy section. I was hoping to find a few warblers or woodpeckers in the pines, but it did not happen. It was on the walk back that I started to see robins, cardinals, blackbirds and even a Black-and-white Warbler after crossing the pedestrian bridge. 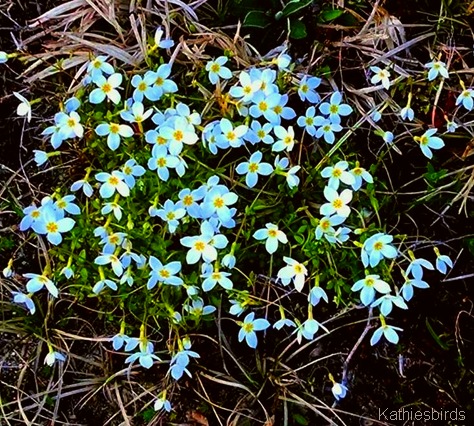 Back near the parking lot the May flowers were in bloom. I love these delicate spring flowers that only grow in the highly acidic soil of the northeast. Also called bluets, these little beauties are only here for a brief time before they are gone.

After my birding here on Friday the birds seen at this location increased from 36 to 44! Since then another birder has birded here and added Belted Kingfisher as the 45 species for this location! Thanks, Delia! Despite the traffic, this is a good birding location. 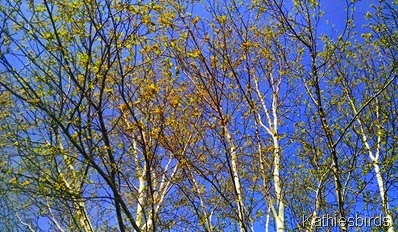