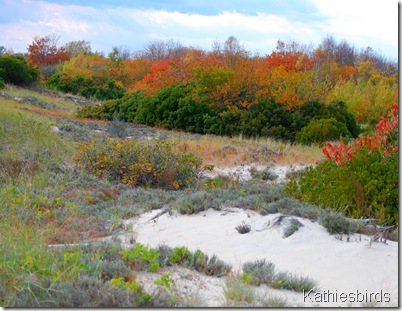 On the eastern coast of Massachusetts is a well known birding hotspot called Plum Island.  Ever since I have moved here everyone has been telling me I need to go to Plum Island, so on a sunny Sunday in October Gus and I abandoned the unpacking and headed for the coast. Only 30 miles from where I live, it took us about 40 minutes to arrive at this coastal island. I felt myself shiver with excitement and anticipation as we crossed the bridge that connects the island to the mainland. We soon found ourselves at the gate to the Parker River National Wildlife Refuge. Though there is a nominal fee of $5 to enter, I was pleased to discover the Inter-agency Pass I bought in Arizona before leaving covered our entrance to the refuge. We took our map and drove in. 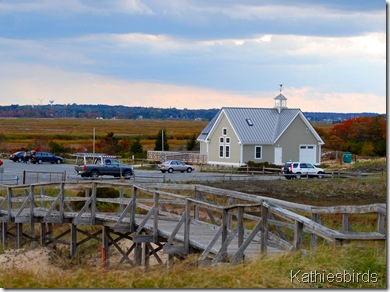 Immediately after passing the gate there is a parking lot on the left-hand side which has the only flush toilets in the refuge. From this same parking lot one can access the beach, but we decide to drive all the way to the end of the island and work our way back.  However, as we pull out of the parking lot and start to head down the road I see some sandpiper-like birds in the marsh on the right-hand side. I ask Gus to stop the car and I get out to identify the bird. 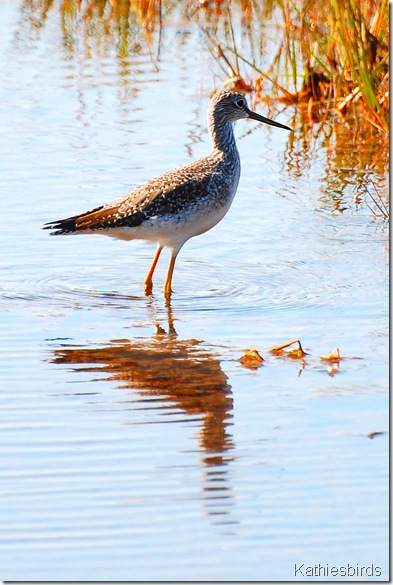 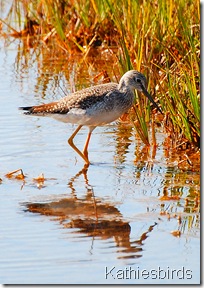 I am standing on the side of the road with bins, camera and bird book.  Soon another couple comes over to me wanting me to ID the bird and I am feeling like an absolute novice!  I know it is in the sandpiper family but goodness knows which one!   After consulting with the birds guide and then hearing the bird call as it flew a short distance away to join 2 others of the same species we decide it is a Greater Yellowlegs. Other than a crow and a seagull, it is my first species in the refuge! I know there are great things ahead since we have driven little more than a quarter mile so far!
We continue down the road past parking space after parking space and pond after pond.  I see some viewing towers along the way and other hiking trails. I see and hear blue jays as they cross the road. We stop at one spot to view some yellow-rumped warblers, and another spot where there are waterfowl in a pond. We drive all the way to the southernmost tip which is called the Sandy Point Conservation Area where we park and hike out through the dunes to the waiting ocean. 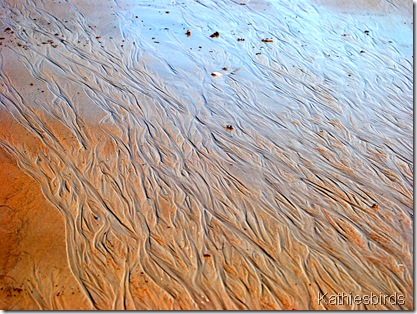 The beach is a huge pale crescent before me. The tide is our right now and I pad along on the sand wishing I had brought my flip flops so I could easily take them off and feel the wet sand on my feet. The retreating ocean makes such lovely patterns in the sand as I head for a rocky area where I think I see some peeps! 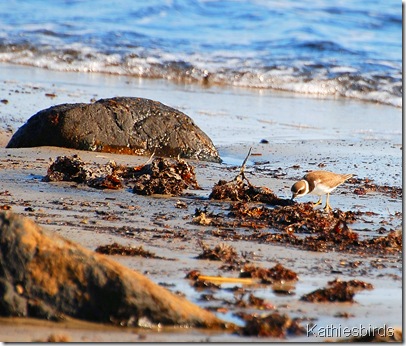 A pair of semi-palmated plovers is feeding among the seaweed and rocks. I take a few steps, then snap a few photos, then take a few more. The birds are heading towards me as I cautiously creep towards them. I do not want to frighten them or disturb them. 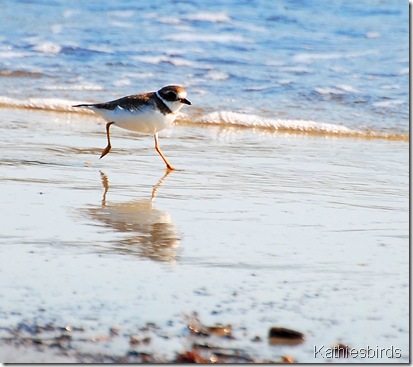 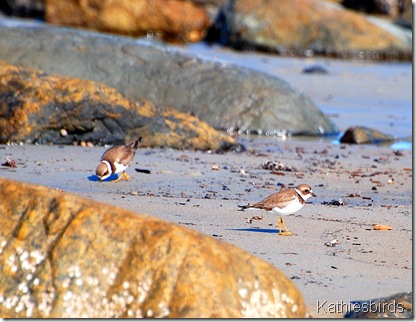 All the world has faded away from me and I am totally focused on what I can see through my lens. Eventually I hear a mother say to a child, “Walk over here and don’t disturb the lady with the camera.” I don’t even look their way but silently thank the mom in my heart. The birds are getting even closer now and I simply freeze and let them walk closer to me. They are getting so close that I fear my lens will soon be to long for them. Their small bodies are starting to fill the frame.  I am thinking how fortunate I am to be here at this place and time when suddenly the birds give an alarm call and fly off farther down the beach. As I lower my camera I hear a voice beside me say, “Oh, I’m sorry.  Did I get to close?” It is an adult woman with a small digital camera. I was so focused on the birds I did not even see or hear her come up on my left side. I do not know how long she has been there or how fast she came up.  I only know the birds are gone now. Flabbergasted, I walk farther down the beach away from her. No, I don’t own the beach and she has every right to take photos but I do find it amusing that the mother with a child had more sense than she did!
Here is a series of photos I took of the semi-palmated plover.  I took almost 100 pictures I think. These are from towards the end. The one immediately below shows the plover with a little sandworm in its beak. 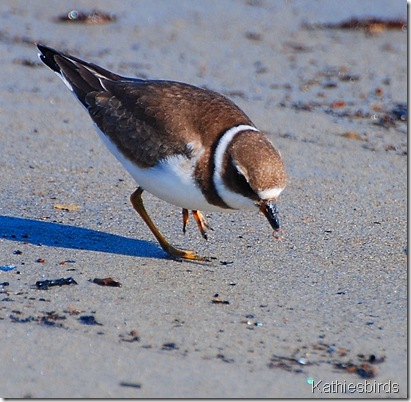 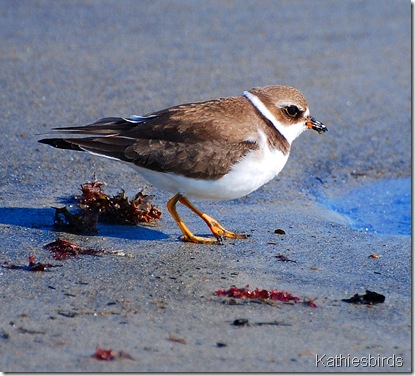 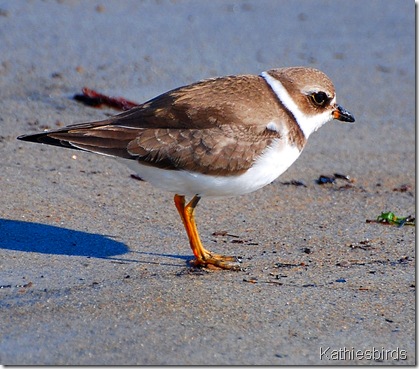 The shadows are getting long as the day wanes. I find my husband waiting patiently on some driftwood for me. 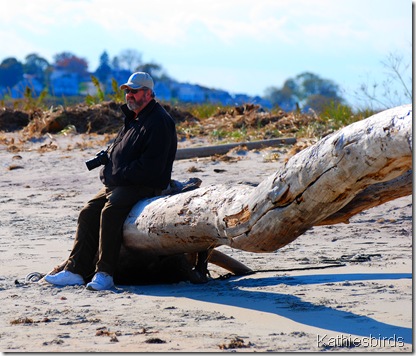 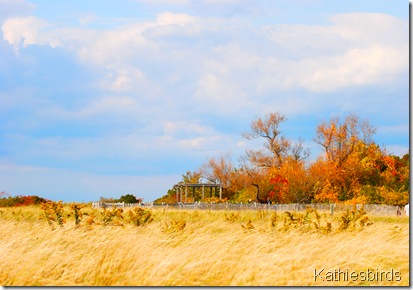 We head back through the dunes and the waving sea grasses to our waiting car and drive back to the first parking lot. The sky has clouded over, the temperature has dropped and the wind has picked up. I zip my jacket up and put on my gloves as we hike the boardwalk to the beach. 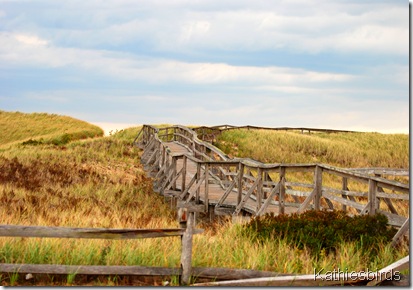 Out on the beach the waves tumble and roar. 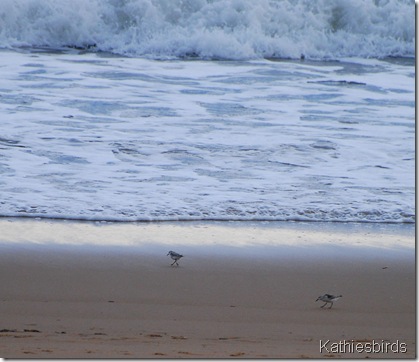 I watch a pair of sanderlings running in and out of the surf looking for a meal. 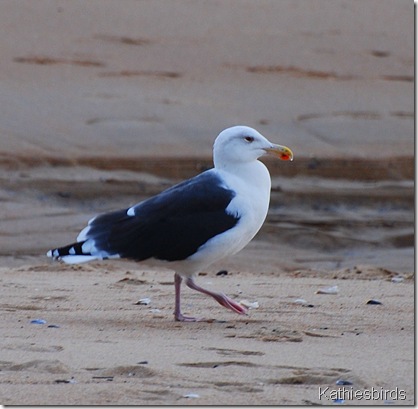 A great black-backed gull marches down the beach unconcerned. 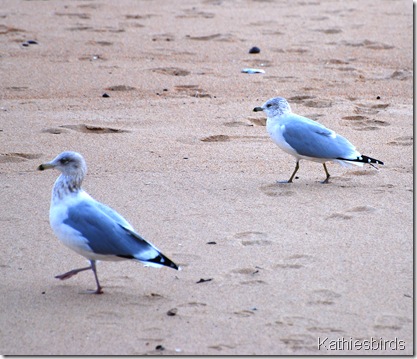 There are few gulls out today and many are in transition or winter plumage but the one in the foreground on the right is a Herring gull I believe due to its pink legs, long neck, large bill, and large eye. The bird behind it is a ring-billed gull. It’s legs are yellow-green, it’s eye small and sweet, its neck short. Though the Herring gull looks like it has a ringed-bill from what I have read this is due to being winter plumage. It will regain its more traditional red spot on the lower mandible when breeding season returns.
As we leave Plum Island I know that I have only seen a small part of what it has to offer. The good thing is that I am close enough to come back again! Being here on the east coast has left me feeling like a novice when it comes to bird identification. Being here at the ocean has left me with a dreamy sort of feeling. I did not see a large number of birds today but I saw one new one, a White-winged Scoter. Scoters are dark ocean ducks that nest in the Arctic. They migrate down here for the winter. A small flock flew out over the waves just off shore.  I snapped a photo that was good enough to identify the birds but not to publish. Still, it is a *Life Bird for me.  I hope you enjoy…
My World Tuesday! 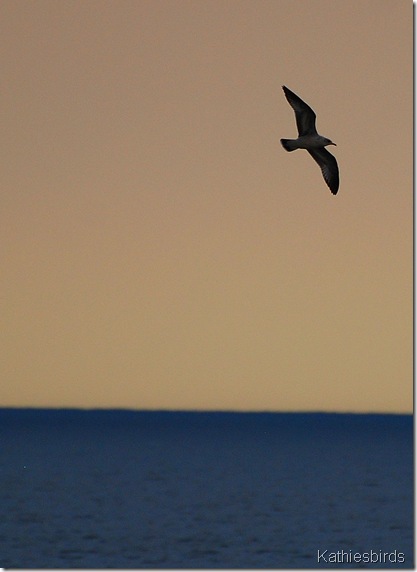 Birds seen on Plum Island October 17, 2010:
*Life Bird Number 388 for me! (A Life Bird is the first time a birder sees that species in their life and adds it to their Life List.) 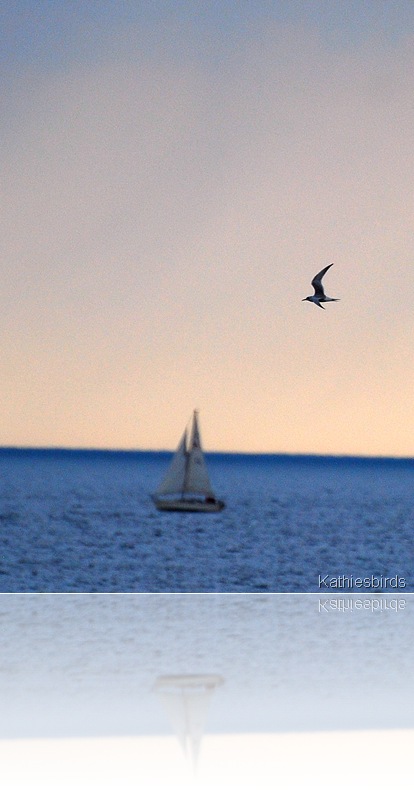