An Evening at Willowdale Estate 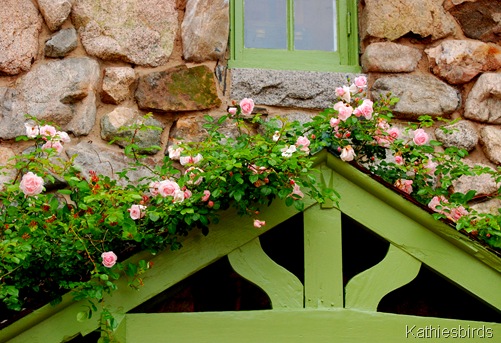 The Courtyard door at Willowdale Estate

Last night under cloudy skies I drove the back roads of Massachusetts to Topsfield for an event at Willowdale Estate in the Bradley Palmer State Forest. Willowdale is the former summer residence of a prominent Boston businessman named Bradley Palmer. Built in 1901, he entertained kings and generals here and donated his lands to the state of Massachusetts for everyone to enjoy. I have never been here before and so found myself travelling over unknown roads through the woodsy but beautiful towns of Boxford and Topsfield. While the estate is only 14 miles from where I live, it took me over 40 minutes to get there as I fought rush hour traffic in the North Andover area, and then cautiously found my way along narrow and winding roads. As I turned into the Bradley Palmer State Forest I found myself awed by beauty and wishing I had left earlier so I would have had more time to explore! 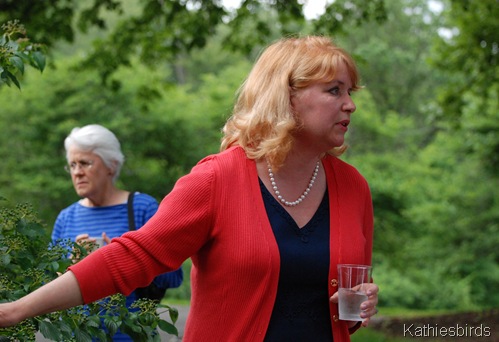 As it was, I arrived about 10 minutes early. I walked up the stairway from the parking lot to view a beautiful stone edifice built in the Arts and Crafts style. All the windows and door were trimmed with wood painted an apple green and the inviting arched front door was painted a welcoming red! Inside we were greeted by a hostess and directed to a large room where delicious refreshments awaited us. The Assistant Planning Manager is the daughter of a dear friend of mine. I have known her since she was an infant and she is like a second daughter to me. Sarah smiled warmly and showed me around. I can only tell you that I have to go back and take more pictures, but after wandering around this place I want to live here! 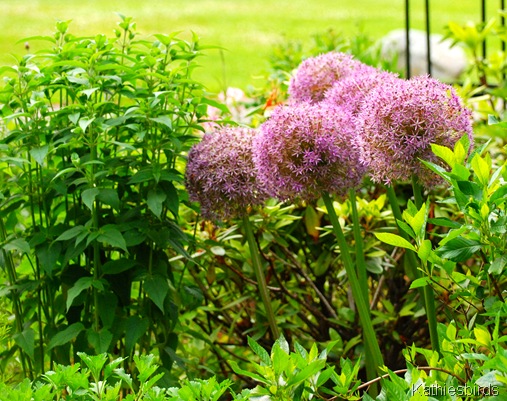 Flowers to attract hummingbirds and butterflies

As the program began we were led out the front door to the circle garden in the center of the driveway. Here Kim pointed out and described the various plants she has incorporated into the landscape to attract butterflies, bumblebees, and hummingbirds. Her theme has been to stick to native plants as much as possible with a few non-invasive ornamentals thrown in. She also tries to plant flowers, trees and bushes that would have been planted during the Arts and Crafts period. 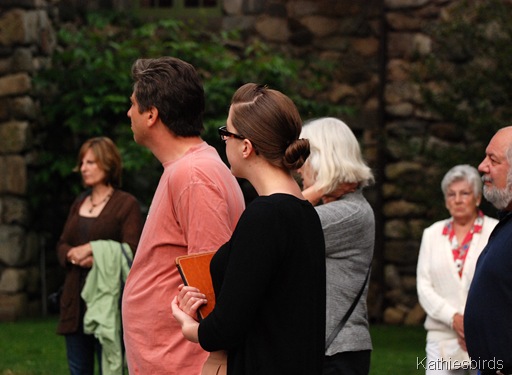 Sarah and guests listen to the talk 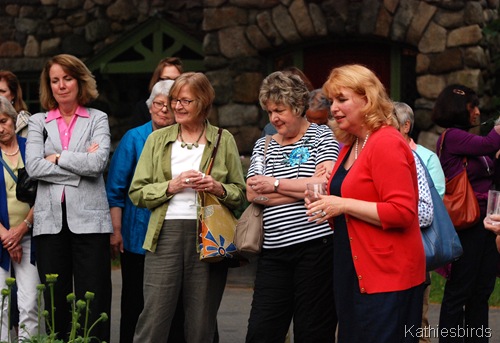 Observing the garden together 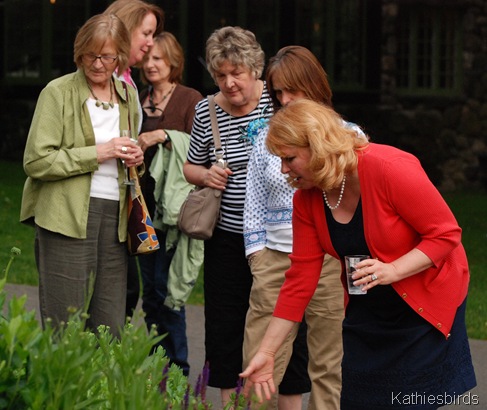 Kim points out flowers in the garden 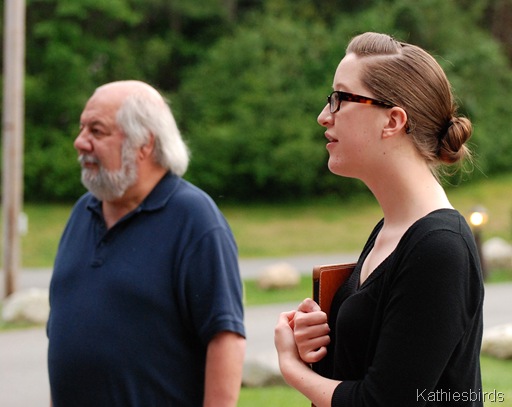 While everyone else was paying attention to Kim I must admit I was distracted by birds in the towering pines overhead. I heard one woodpecker drumming but could not find it, then saw movement in the pine boughs and hoped I was seeing a Blackpoll Warbler but upon further investigation discovered it was just a chickadee. Then, I think I did see a warbler or a vireo but just as I got focused in the bird flew off as the group moved toward the front door to go and view the courtyard garden.

In the Courtyard Garden 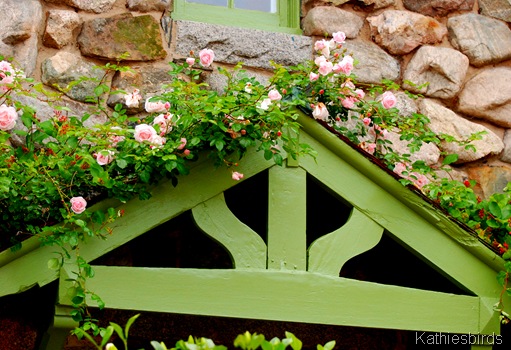 We entered the courtyard through a rose covered door frame. The courtyard is surrounded on three sides by the stone building. Beyond that a tent is erected for weddings and other events that are planned for this estate. But overhead one has a full view of the sky and the tree tops and I managed to find birds even from in here. 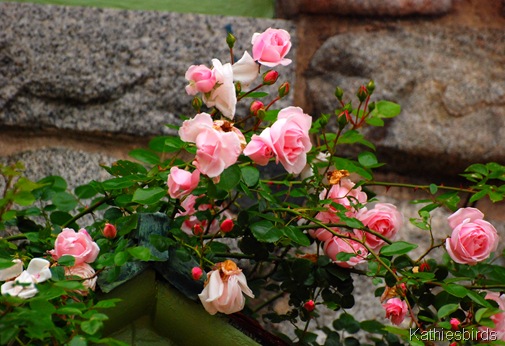 Roses over the doorway

A large seagull flew over our head shortly after we entered, then a flicker flew into the top of a nearby tree. Another woman asked me what I was seeing, then another came and took its picture saying it was the first flicker she had ever seen! I guess when you are a birder, you are always on active duty! However, I did not want to distract from Kim’s wonderful talk, so I made my way back to the front of the group as she pointed out some “Whirling butterflies” or guara that she had planted along the perimeter of the garden. I knew this plant from Utah and Arizona where I used to live. There it grows tall and willowy and waves in the wind. Here it was little more than a mound of blossoms about 12 to 18 inches tall, but still pretty and delicate and still an attractant to butterflies! 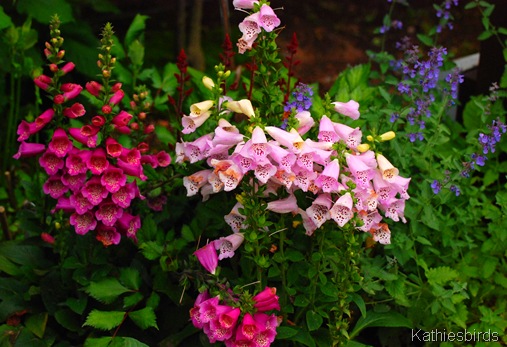 Foxglove in the courtyard 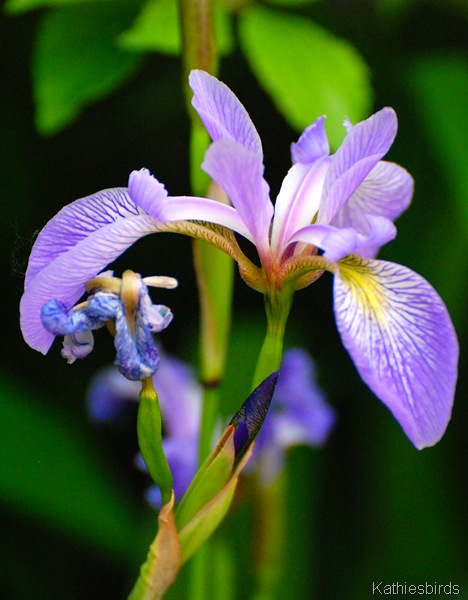 Iris in the courtyard 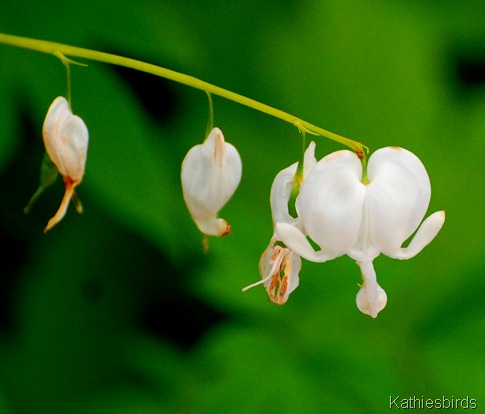 The last Bleeding Heart of the Season

After the tour of the garden and its flowers we returned to the building where we were seated in the ballroom and treated to a viewing of two movies produced by Kim. One was just a short introduction on the Lifecycle of the Black Swallowtail Butterfly and the other was all about the pollinators of The Butterfly Garden at Willowdale Estate. Both were beautifully done though there was one scene where it would have been nice to edit out the sound of an airplane flying overhead. Still, the films showed the gardens in all their glory and the numerous species that “nectar” at the flowers. Now, I just want to come back and find some more birds! 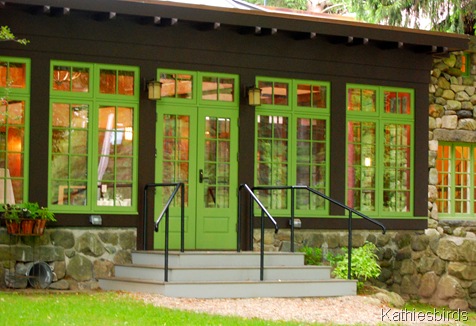 Part of the mansion as seen from outside at dusk.

Of course I stayed and chatted with Sarah and I finally was able to meet Kim. In-between the garden tour and the movie I brought my camera and binoculars to the car and removed my hat. On the way down the steps to the parking lot I spotted two chipping sparrows along the edge of the parking lot. Yes, birds are everywhere! It was very dark by the time I left and I took a wrong turn out of the driveway and ended up in Beverly. I soon got reoriented and hopped on 128 south where I picked up route 114 and headed home. All in all it was a wonderful evening and I was so glad that I went! Now I can’t wait to go back!

If you are an artist of any kind you might want to click on the link for the Event Calendar. In there you will find information about 2 upcoming dates with open hours for artists to come and draw, paint or photograph on the grounds or inside the building! I may even go myself!