Where the Birds Are 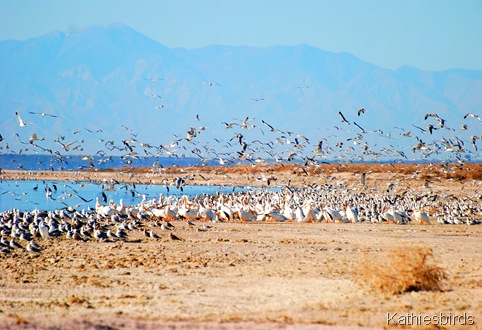 After searching for birds all afternoon and into the evening on Thanksgiving Day and all morning on Black Friday Gus and I left the Salton Sea Visitor’s center off Gentry Road and headed up the east side of the sea. So far we had driven down dirt roads past vast agricultural fields. So far we had seen birds in the fields, and birds in the coves, and birds on isolated beaches, but we had yet to find the open sea, the wide expanse that I was expecting to be something like the Great Salt Lake in Utah. I had my list of birding hotspots before me, but when I wanted Gus to drive down onto one wildlife refuge along the sea he nixed that idea when he saw a covey of campers with hunters in camouflage. Next we tried Bombay Beach but even I was scared of that place with its broken down buildings that looked like a third world country. We drove the outer loop of the little village past the dikes that held the water in the sea. All the time I was craning my neck to see if I could see any birds, but all I saw was dirt and broken and rotting stairs, and very humble homes, some little more than shacks. We did not stop and photograph any of this. We were too scared! 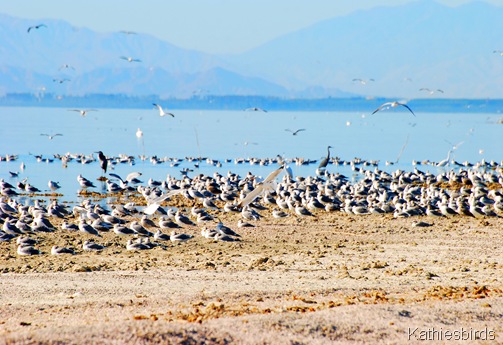 So on up the coast we drove. Soon we were within the bounds of the Salton Sea Recreational Area, and then we were at the sea! We could finally see it from our car. Then we came to the Salton Sea Salt Creek Beach and drove down the gravel road and parked. I quickly grabbed my scope, bins and camera and made for the sea which shimmered like a pale blue jewel amidst the mountains and mud. 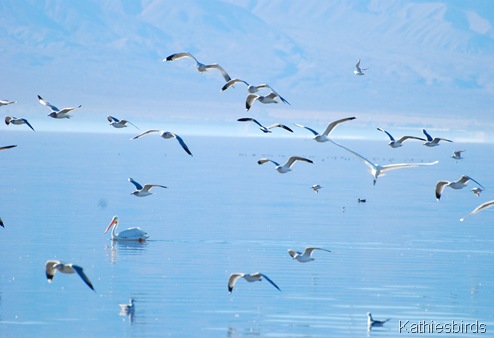 Here were the myriads of birds I had heard about! They filled the beach, the water, and the sky! There were literally birds EVERYWHERE! 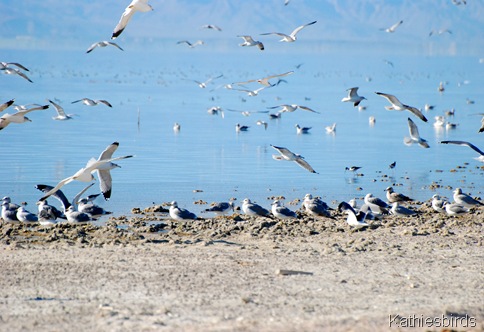 I hardly knew where to look first as I tried to take it all in. I soon realized that I would not be able to, so I just relaxed and looked through the scope. For over an hour I stood there in the hot sun with an empty belly looking at birds. I could have stayed all day, but I could tell I was getting sun burnt! If you go to the Salton Sea and you can only go to one place, I would say this is the one! Go here! 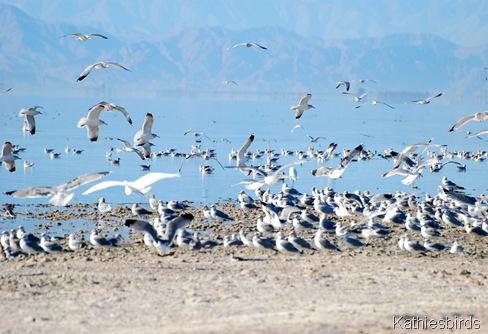 There were so many gulls! 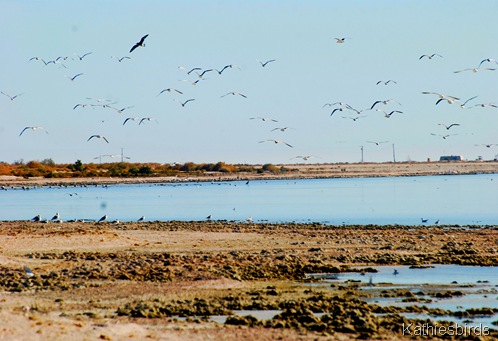 I watched a Caspian Tern on the hunt. 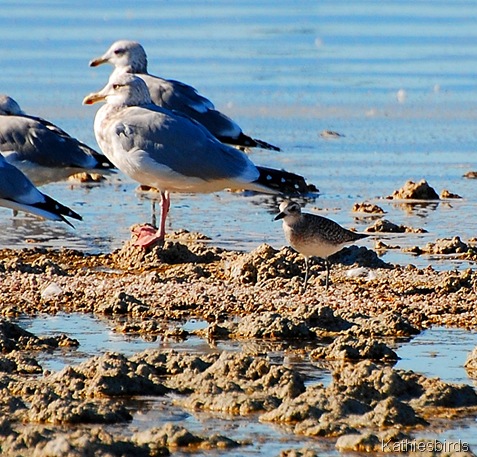 I saw so many gulls and even a Black-bellied Plover! 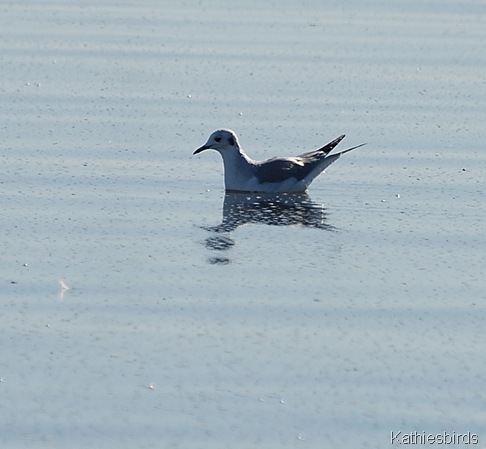 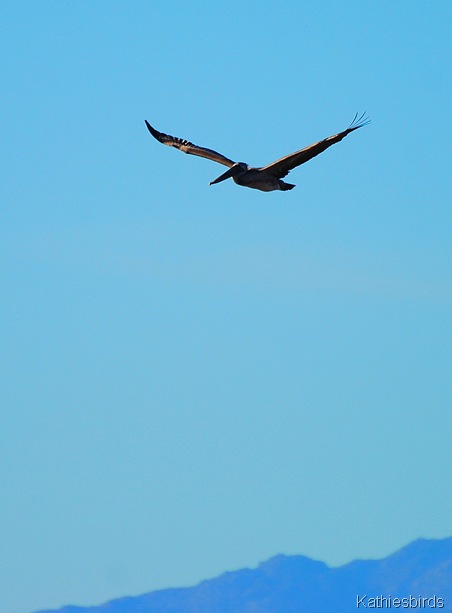 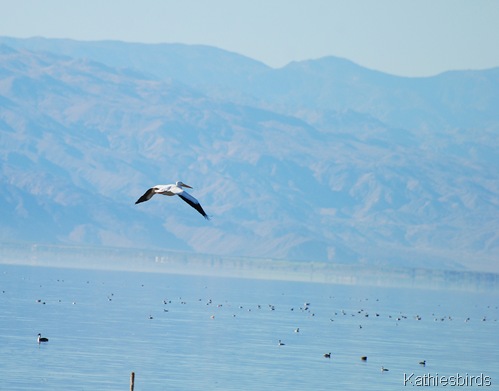 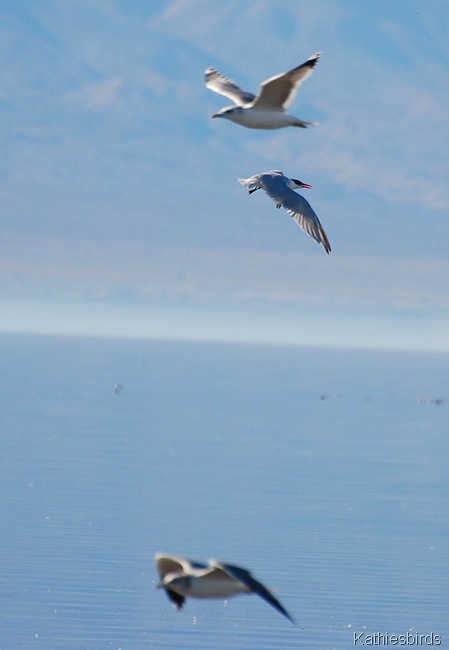 The wind was quite strong and there was dust in the air blowing in across the sea from the south side. We later discovered that there were hundreds of people off to the southwest riding dirt bikes and dune buggies through the desert and kicking up all that dust which blew across the sea obscuring the opposite shore. 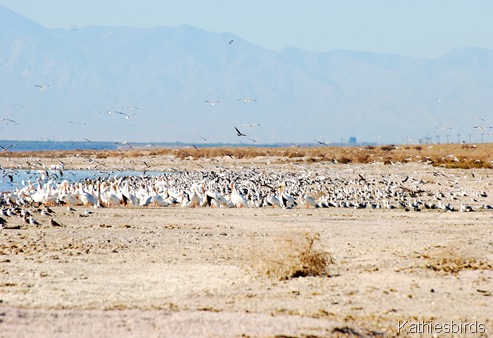 But I was so happy to be here, because this is Where the Birds Are!

Note: We are experiencing a very cold snap here in Tucson at the moment. Yesterday morning it was only 25 F! this morning it could go even lower. But like the birding nut I am, I am still going out birding this morning! Chris Rohrer and I plan on birding the Rio Rico area in our continuous pursuit of our Big January. He has been out more than I have and his now has over 130 species for the month. I am still at 104 species but we will see what today brings. I am missing nice warm fireplace from my Andover Apartment right now. If I ever get to buy or build my own home again I swear it will have a fireplace in it!