Along the Madison River in Yellowstone NP 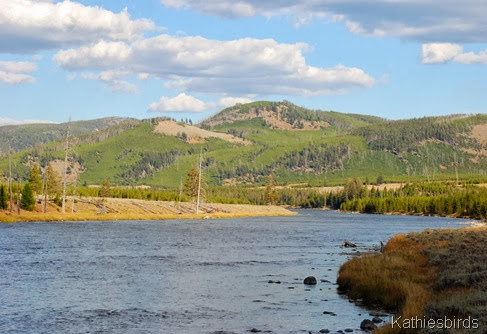 As Gus and I drove into Yellowstone National Park on September 10 my heart was beating wildly and my eyes drank in my surroundings with eager anticipation. Not only was I searching for birds, I was pulling at my memory, trying to remember this place that I love, wondering if anything would seem familiar since it had been so long since we had been here. I had come back with my daughter and her then boyfriend back in 2006, but Gus had not been here since 2002 and not in through West Entrance. His last time coming in this way was over 25 years ago!

After leaving Idaho Falls we drove up through Island Park and checked in at our hotel. All along the way I counted birds and I had high hopes for getting my first birds in Montana. West Yellowstone where we were staying is in Montana, but soon after crossing into the park you enter Wyoming. Montana would be a new state for me to get a bird list in. However, my first Montana birds were Brewer’s Blackbirds. I quickly added Rock Pigeons to that list. Little did I know then that I would only see one more species of bird in Montana during my whole time there! I added Common Ravens the next day! 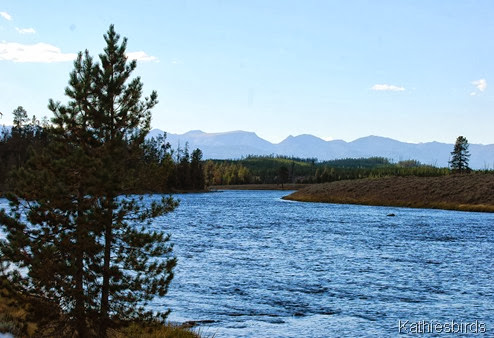 Before leaving town Gus and I stopped to buy a sandwich to bring into the park with us. We needed to eat supper but we did not want to waste time in a restaurant. We drove along the river until we found a parking lot with a nearby bench. Pulling off the main road, we parked the car and walked the short distance to the bench where we sat by cool blue waters and listened to it gurgle and sing as it slipped gently by us while we ate. I watched the trees, skies and river hopefully for birds but all I saw and heard nothing. Before getting up to leave I felt a sharp stab in my upper thigh. I pulled a splinter of wood from my pants, feeling lucky that it came out easily. We got back in the car and continued our drive east into the park. 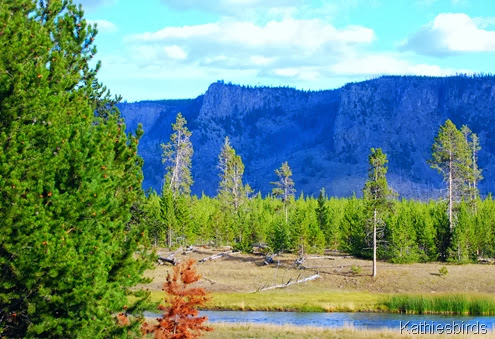 As we entered the park the river was on our left, now it crossed to the right hand side and another parking area opened up. I saw some geese and ducks in the water, and so I asked Gus to pull off for me to count them. 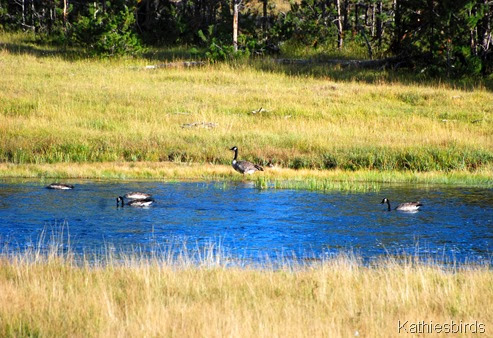 A few Canada geese floated in the river and grazed on the banks. Overhead I heard and saw a Mountain chickadee. Then I heard some “tisking” coming from another tree and found a Yellow-rumped Warbler in the pines. 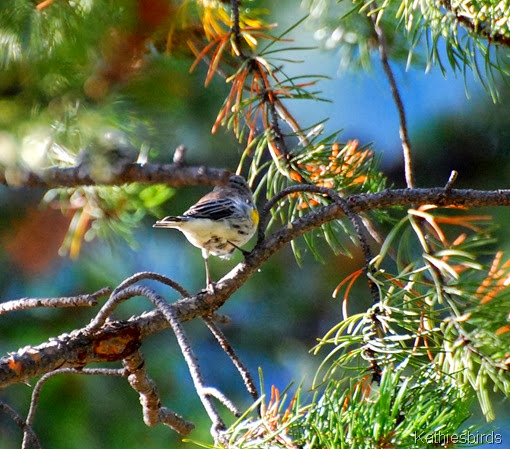 In spite of all my efforts, I never could get it to turn around for a proper photo!

In the end I counted 4 species along the 7.5 mile road that brought us to Madison Junction where we turned north to the Norris Geyser Basin. If we were lucky, we would get there in time to walk around before it got too dark!

Note: How strange it feels to write about Yellowstone National Park knowing it is now closed to everyone due to the Government Shutdown. I am so thankful we went when we did now, but feel so sad for those who are being denied access to our wonderful National Parks. Ken Burns said they were “America’s Best Idea,” and I agree. It is a shame that we and the rest of the world are being shut out of them at this point in time.