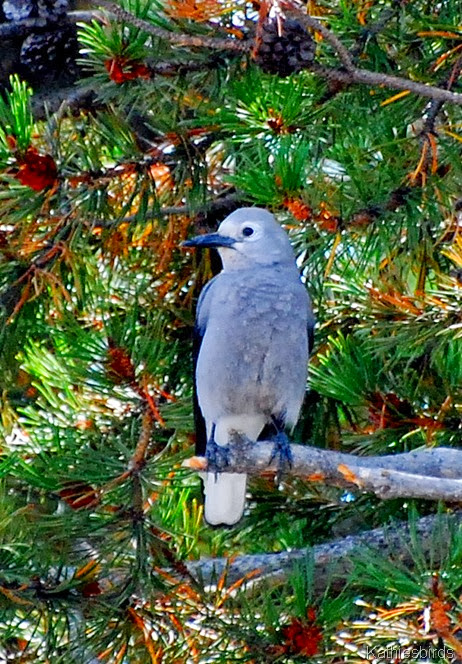 September 11, 2013: Everywhere we went in Yellowstone I counted birds, but there were not a lot of birds to count. I would see a few here and a few there and I found different birds at each location leading to a final list (to be published in the next post) of 28 species overall within Yellowstone National Park. After leaving West Thumb earlier in the day I found a little cove on the lake that was full of ducks. The birds were so far away and the sun so bright that I could not tell what many of them were until I got home and off-loaded my photos. 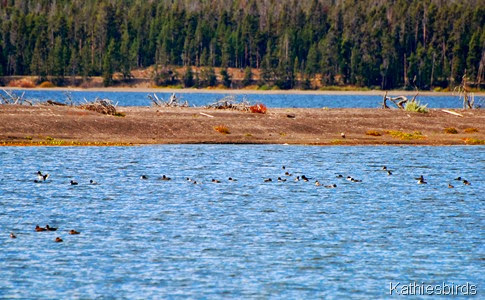 In this bunch I found Lesser Scaup, goldeneyes, bufflehead, and Common Mergansers. 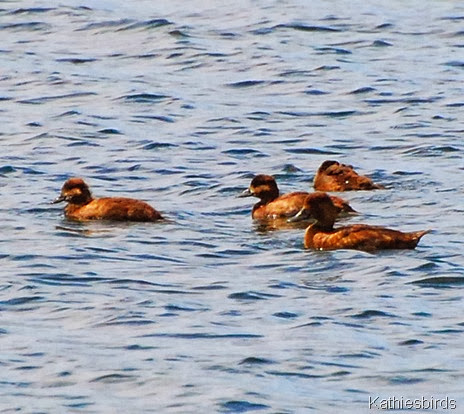 But I also found ducks I could not identify. The duck in the front right is obviously different than the three behind it but what are they? 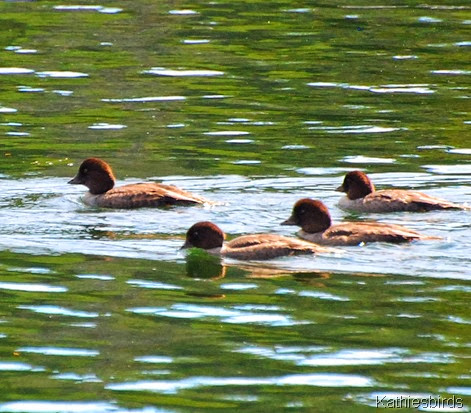 I found these Common Goldeneyes at the Bridge Bay Marina, but there were many more ducks to far distant to tell, even with a photograph. 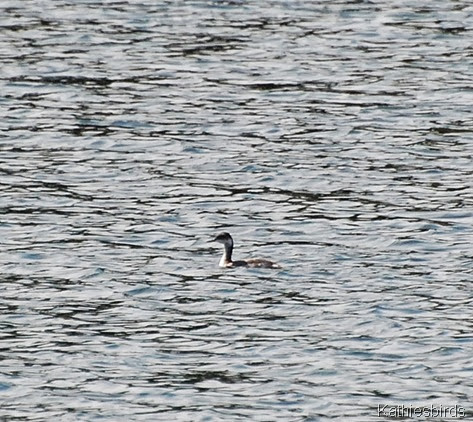 Distant picture of  Horned Grebe in non-breeding plumage identified by its long, upright neck, thin bill, and white cheek. The back is long and flat whereas the similar Eared Grebe would have a shorter and rounder back and a dark cheek. while it’s not the greatest picture there is still enough information there to help with identification. 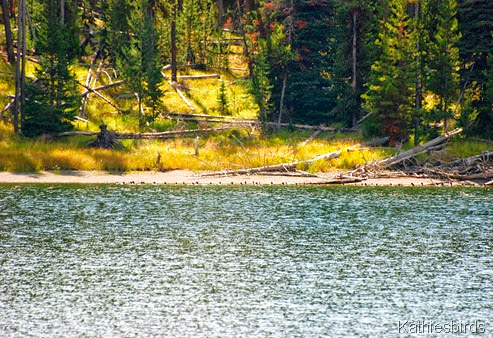 I estimated there were at least 120 goldeneyes across the cove, but even this shot is too distant for me to positively I.D. any of them. 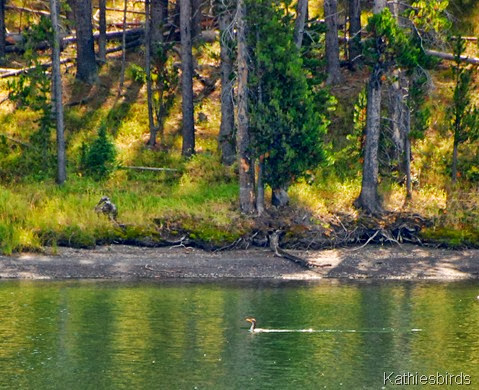 But, it didn’t take me long to figure out that this was a Double-crested cormorant. I saw two of them here at the Bridge Bay marina along with some barn swallows and a couple of ravens. Ravens were the most common bird I saw. 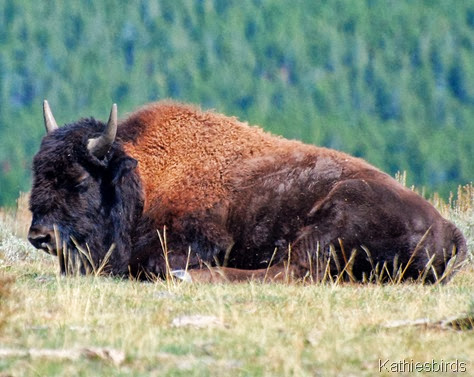 Though I wanted to see some elk and hear them bugling I only found bison instead.

One of my goals on this day was to try to find the Trumpeter Swans. I had been told by a park ranger the night before they could be found at a place called Alum Creek. I suppose we should have gone there first, but it was all the way across the park and I decided we should work our way around to that point as we visited several other locations along the way. As it was, by the time we got to Alum Creek on the east side of Yellowstone it was 2 p.m. and all I found were ducks and geese! 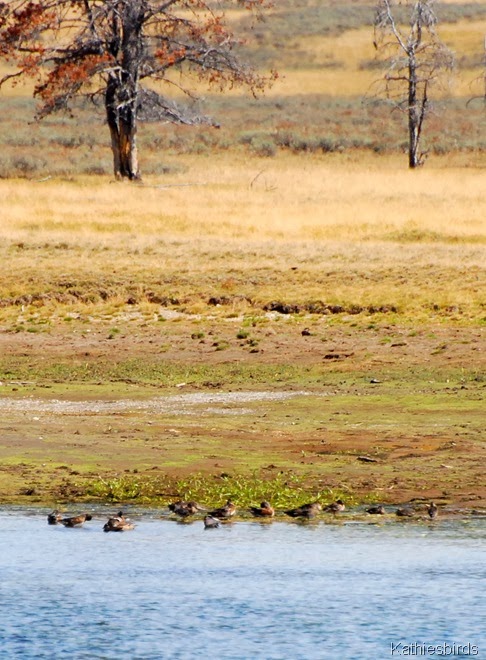 From there is was a long drive around to Mammoth Hot Springs and back to Alum Creek again at sunset. On our way we stopped at a place called Swan Lake on the road south of Mammoth. While I didn’t find any swans there either, I did spot a pair of Bald Eagles in the trees across the lake. 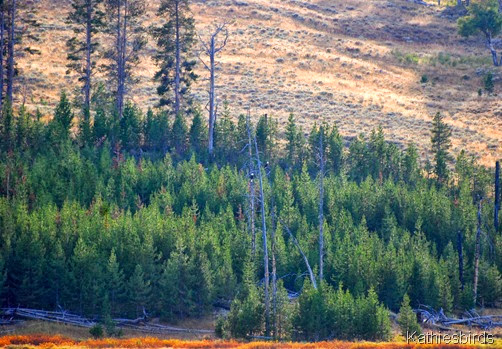 Can you see the black and white spots in the trees in the middle?

Yep, those are eagles!

It was just after sunset when we arrived back at Alum Creek for one more check to see if any swans had flown in for the evening. While Gus waited in the car I got out and walked along the edge of the road. Just south of us was a bison road block. 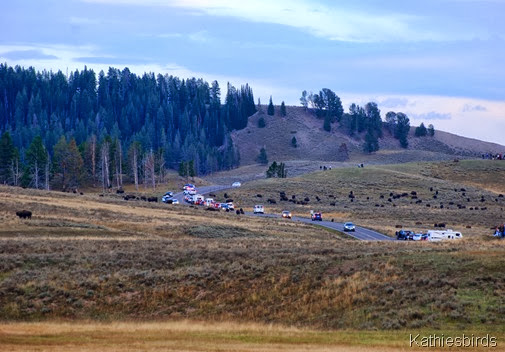 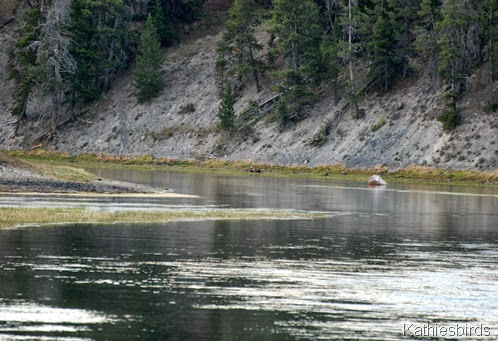 But all was peaceful and serene on Alum Creek without a swan in sight! 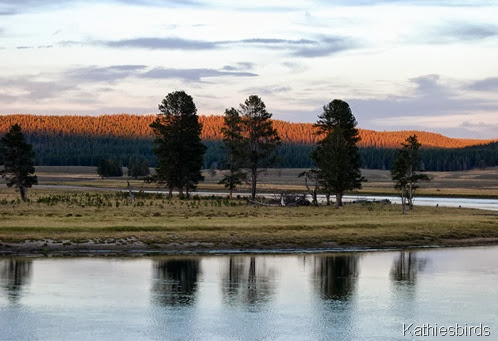 I marveled at a ribbon of rosy light as it fell across the spine of the hills beyond.

Then I said my good-byes to Yellowstone and got back in the car with Gus to drive away. I do not know if I will ever make it back here again. 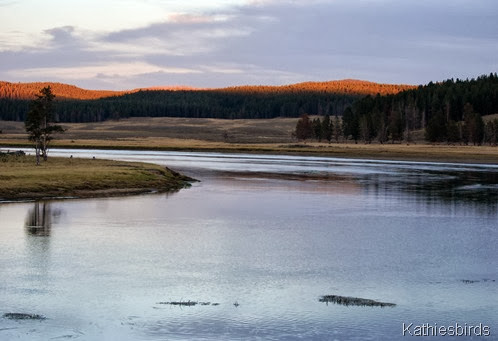 Trip to Yellowstone and Utah 2013

(click the link above to see all posts on this subject)