Del Prado Linear Park and What I Saw There 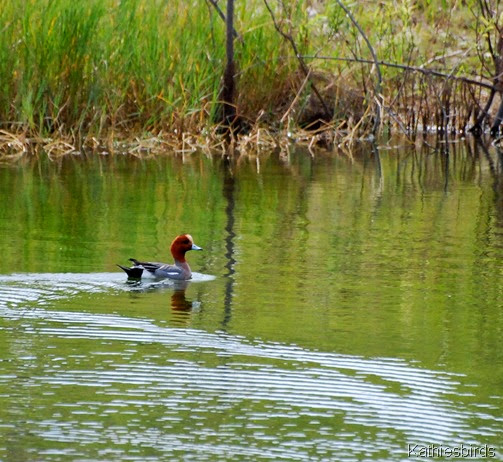 After birding Yellow Fever Creek Preserve I still had a bit of time left to go bird the Del Prado Linear Park. Ever since my arrival in Florida two weeks ago I had been searching for the Mottled Duck, but even though I searched the canals in my brother’s neighborhood and the mangroves swamps of Ding Darling on Sanibel island I had yet to see even one Mottled Duck! After checking the eBird Bar Chart for Florida I discovered that some were being seen at the Del Prado Linear Park Ponds In Cape Coral. I found the spot on the map and soon drove there only to discover there was no public parking lot. I drove around the neighborhood at NE 10th Lane across from Lowe’s and finally decided it was okay to park along the street. Though I went looking for Mottled Ducks, the first duck I saw was actually a Eurasian Widgeon! This was a nice bonus bird fro me since I had only seen this species once before at Nisqually National Wildlife Refuge near Tacoma, Washington! The Eurasian Widgeon was a new Florida Species as well as a new 2014 Year Species for me! Unlike the American Widgeon, this bird sports a Rust-colored head with a pale yellow crown stripe instead of the iridescent green and gray head with a white stripe of the American species. 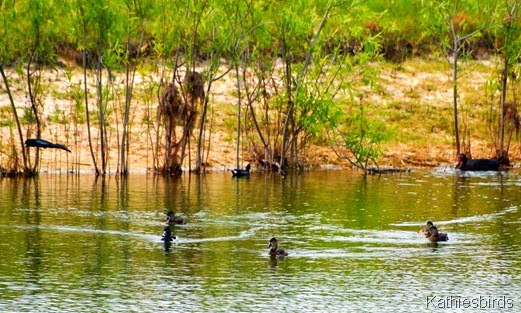 The cattail lined pond had a variety of other species.

Look closely and you will see: 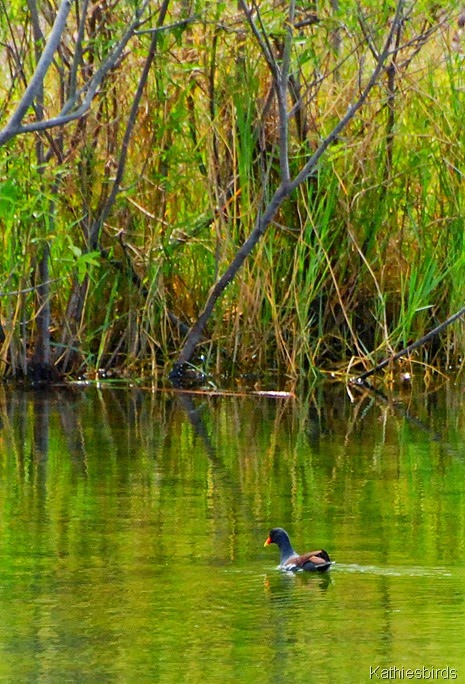 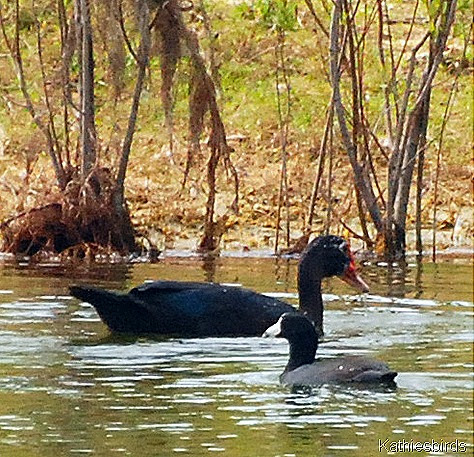 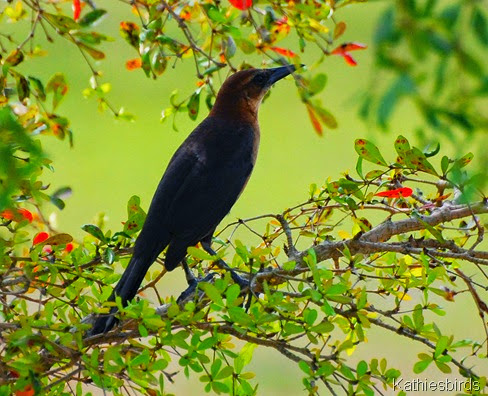 To me, this looks a lot like the female Great-tailed Grackles I would see in Tucson! 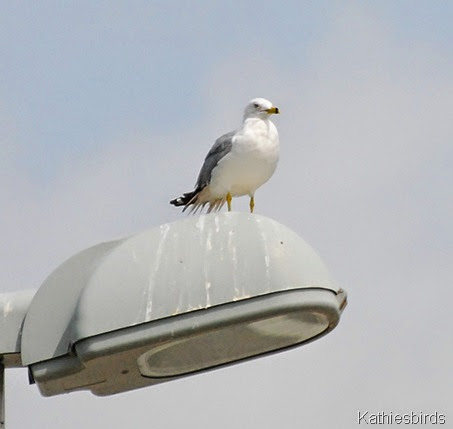 The ever present Ring-billed Gulls! 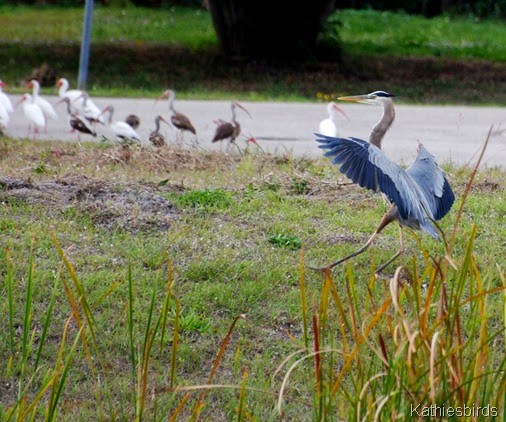 The Great Blue Heron and the White Ibis increased my bird count! 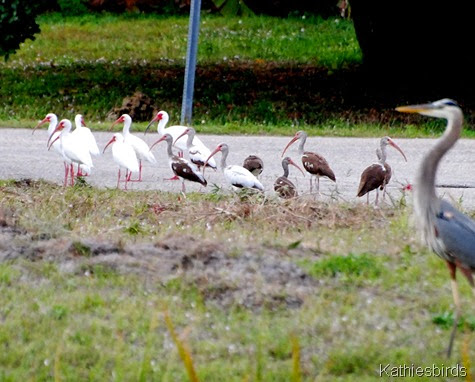 The darker birds seen here are immature White Ibises and are not to be confused with Glossy Ibis which are solid and shiny brown!

Then, finally I found them! 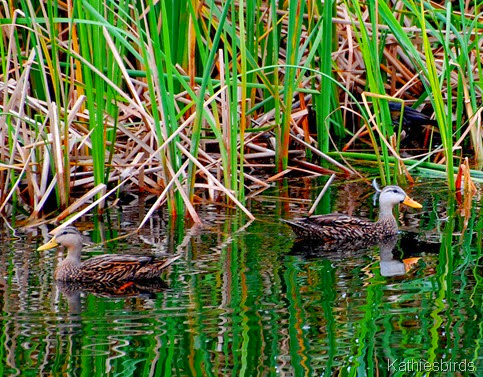 While these might look like mallards, they are not. See the pale buffy cheeks and the distinct line between the mottled bodies and the plain necks?  Mottled Ducks are one of the only puddle ducks to nest regularly in Florida and on the Gulf Coast (Kaufman Field Guide to the Birds of North America). 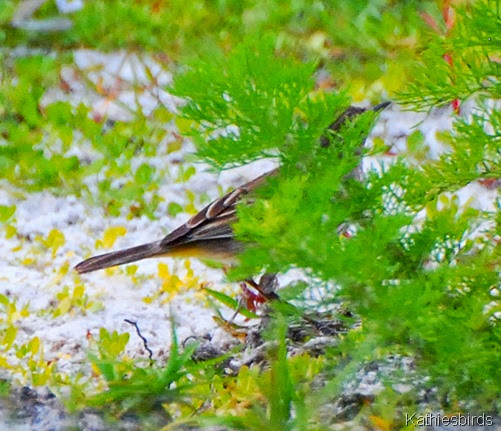 This is what I saw at first as the bird walked along the shore wagging its tail.

I tried to stay calm and quiet while also trying to get into a position to get a better photograph of the bird. I finally got a few more shots and studied them all afternoon yesterday. Was it a pipit? Was it a palm warbler? Was it perhaps a Waterthrush? 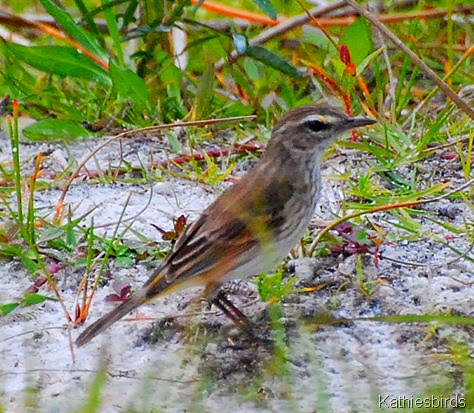 I went back and forth so many times, but the posture was not right for a waterthrush, which is more horizontal. Also, both waterthrushes have shorter tails and pink legs. This bird has a long tail and dark legs. Another thing that ruled out Northern and Louisiana Water thrush was the two faint wingbars. I could not find any photo in any bird guide that showed wingbars on a waterthrush. So, what a about Palm Warbler. I had been seeing that species all over Florida everywhere I went. It likes to walk on the ground and wag its tail, but it has yellow under-tail coverts. This bird does not have any yellow undertail coverts! So, by process of elimination, this must be a pipit! Still, I would say that it looks different from some of the photos in some of the field guides, yet it does look like birds I have observed in the field and it was my first impression when I saw it! Thus it is that I have added this bird to my list for Del Prado Linear Park which increased my Florida List to 103 species for this year! (If you disagree with me about this I.D. please say so in the comments and tell me why.) 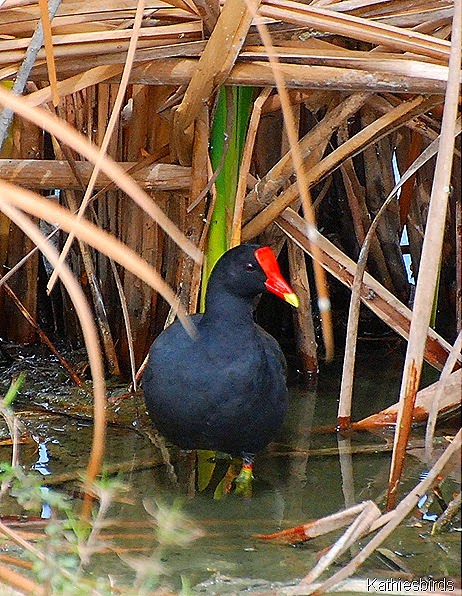 I was as happy as a moorhen in mud!

(This species has been renamed Common Gallinule.) 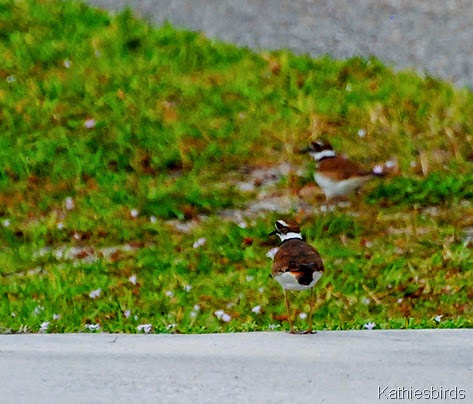 Then, to brighten my day, a couple of killdeer flew in and landed on a nearby lawn!

I would say my most unusual sighting of the day was a species that is common elsewhere but this is the only location where I saw it. In a driveway across the street from one of the ponds someone had put out seed for the ducks and birds. It was here that I saw my one and only House Sparrow in all of Florida! I did not see any hanging around parking lots and restaurants like I do in so many other states. I did not see House Sparrows anywhere else!

Del Prado Linear park proved to be an easy and profitable spot to count birds and I thoroughly enjoyed myself. If I had more time and it wasn’t about to rain, I would have liked to walk along the 2 mile stretch, but as it was I mostly stayed right around the three ponds at NE 10th Lane. Below is a list of the birds I saw.

Birding Notes: I counted bird for 44 minutes starting at 11:05 a.m. I did not count all the crackles as it would have taken me too long to try to separate them all out from each other. An “x” in eBird means the species was present. 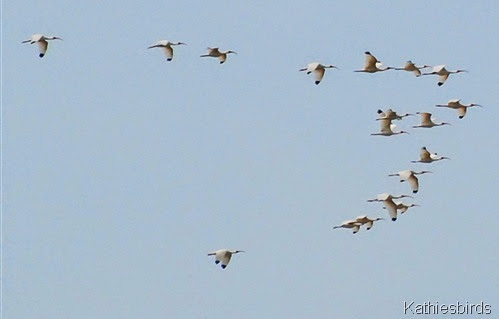