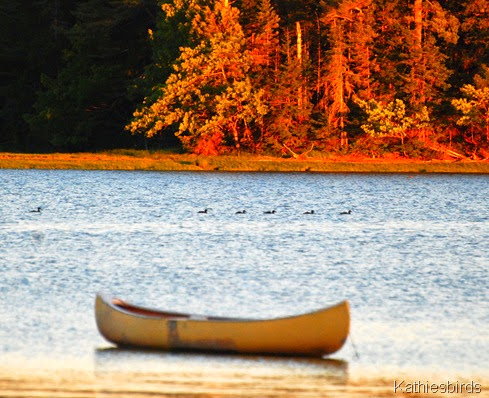 Friday, June 20, 2014: Everything was done. All I had to do was wait for my friend, Chris to arrive for a two week visit where we planned on birding all over Maine. My husband had fallen asleep watching watching TV, but I just wanted to be outside. The weather was so nice and there were so many birds to see. So, I quietly left the house and took the short drive over to Wharton’s Point. I never know what I will see there, and I wanted to check it out before Chris arrived on Sunday.

The sun was setting as I pulled into the parking area. For once there were no other cars. However, the mosquitoes and black flies were starting to make their appearance known, so I did put on some bug spray, and I snugged my hat securely onto my head. As soon as I got out of the car, I could hear Yellow Warblers singing their “Sweet, sweet, so Sweet” song. A song sparrow sang from the bushes and the yellow canoe bobbed on the bay, a sign that the tide was in. I walked down to the shore to see what I could see. A few Common Eiders floated on the bay. In the nearby fields the Bobolinks called and fluttered over the meadow flowers. Soon I was in the zone and focused on birds.

As I walked the shoreline searching for birds I heard various sounds around me, but I kept hearing one sound over and over again. It was an unfamiliar and strange sound, and it seemed out of place in this natural area and yet… It sounded like mini crashing waves. I tried to ignore it but then a small bird flitted past me low in the marsh grass, then suddenly dove into the short green spears and disappeared. My birders brain started working and I started to wonder if the “mini crashing waves” could be a bird call. I remembered that the Seaside Sparrow and the Grasshopper Sparrow had a strange song, so I pulled out my smart phone and opened up my birding app. I then pulled up the sparrow family and started going through the species. I knew it was not a Song Sparrow or a Chipping Sparrow. I selected the few species I knew might be near the ocean. It wasn’t long before I was listening to the song of a Nelson’s Sparrow. As I played the song a few times I suddenly heard it repeated in the marsh grass! I heard one bird on one side of the boat ramp, and two on the other side! Three! Three Nelson's Sparrows! Three mini crashing waves! I don’t know hwy it delighted me so, but it did. It was like discovering a secret treasure, and I couldn’t help smiling.

When I returned home and entered my eBird list I discovered it was a Life Bird for me! I also read that this species has a very specific habitat, living only in the narrow margin of salt marsh grass between the shoreline and the rest of the world. Here at Wharton Point, that area is about 10 to 12 feet wide as it follows the shoreline and one can easily seen the distinction between the salt marsh grass and the other native vegetation.

I stood there mesmerized by the sound of this bird which I later realized also sound like the sound your recycle icon makes on your computer when you empty the trash! As sunset turned into dusk and then twilight a small sparrow flew up onto a nearby tree. Was it possibly the Nelson’s Sparrow, or some other bird? Though I tried to take a picture (seen below) the light was too dim to make out what species I was seeing, and though I went home to wait for Chris, this was one of the first places I took him after his arrival so he could see and hear this amazing little bird!

Though I only counted 12 species there that night, I counted the most important one. Nelson’s Sparrow is Life Bird #470 for me! 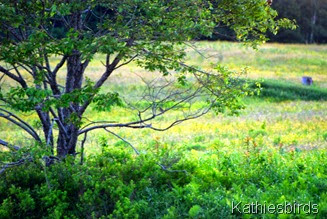 See the small brown lump on the lower right branch?

You can read more about Wharton’s Point and the Nelson’s Sparrow by clicking on the links below: