The Birds in Grammie G’s Yard 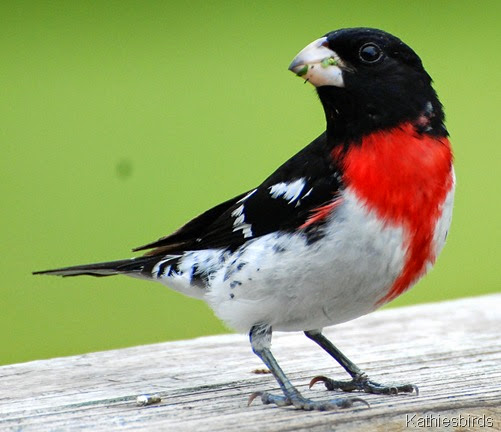 June 10, 2014: Long before Chris Rohrer arrived for Our Big New England Birding Adventure I went to meet and visit a fellow blogger over in Androscoggin County, Maine. I had known Grace from her blog, Grammie’s Ramblings for a few years. Having lived in Androscoggin County before myself, I knew it was an under-birded locale and I always encouraged her in her eBirding. Grace is now one of the top two eBirders in that county! The information she supplies to eBird is invaluable in my opinion since so few people eBird there. I was looking forward to meeting this legendary eBirder and seeing her yard birds! 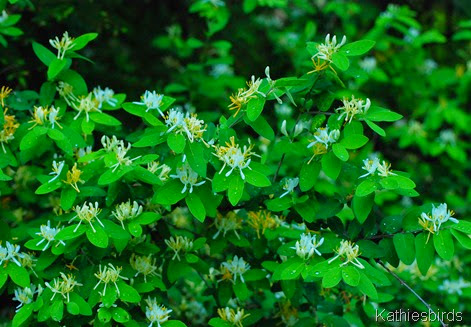 I walked past fragrant honeysuckle in bloom on my way to the car.

In twenty minutes I was at her house. Or…it would have been 20 minutes if I hadn’t stopped to buy donuts at Tim Horton’s In Topsham! I don’t think Grace had any complaints about that! She put on a pot of coffee and we sat down at her table to chat. And of course, we started talking about birds! Right near the table was a sliding glass door that opened onto her deck. Across the deck she had a wire strung, and from that wire dangled numerous bird feeders. Purple Finches and woodpeckers clung to the feeders. Swallows swooped through the yard. Grace and I watched birds, sipped coffee, and munched on Boston Cream donuts! Yum! While we were chatting about all the birds we were seeing, one of us asked if the other had seen any cuckoos. I was just telling her about seeing the Black-billed cuckoo in my yard when Grace suddenly got up to look out a different window. She called me over to take a look. Right now Grace only has her camera to use, but I had both camera and binoculars. I quickly stood up to look out the window and focused on the arbor in her backyard. 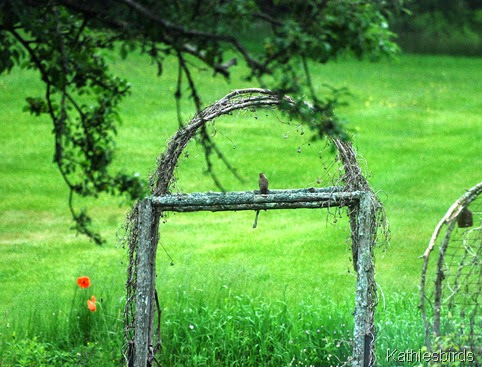 Was it a bird…or a stick?

Oh My goodness! it was a Black-billed Cuckoo! 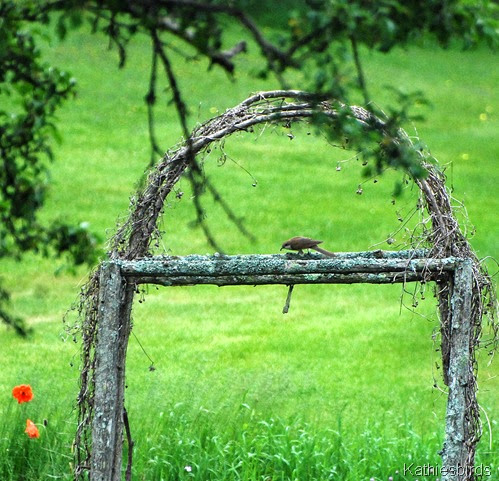 While I had seen the Black-billed cuckoo before, it was a Life Bird for Grace!

It was also a new Yard Bird and a new species in Androscoggin county. For me, this is my first ever photo of one, even though I have seen them a few times before! What a great way to start off the day! 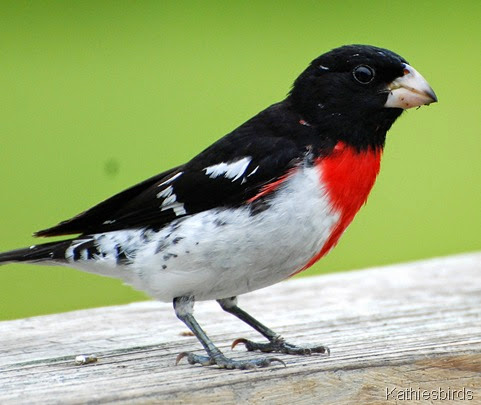 Of course, I could not resist taking another photo of the Rose-breasted Grosbeak! Most of these pictures were shot through the windows of her house. I am amazed at how they came out, since I have had a terrible time photographing through my own wavy windows! 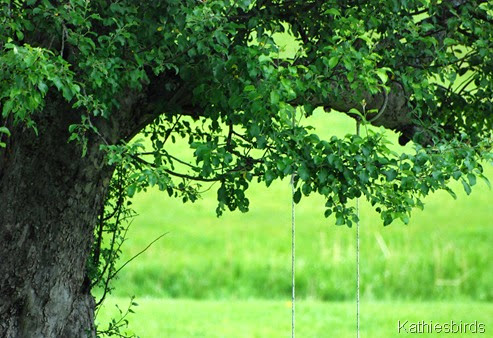 Yes, there is a bird in there somewhere!

It was a lovely cool and gray day. 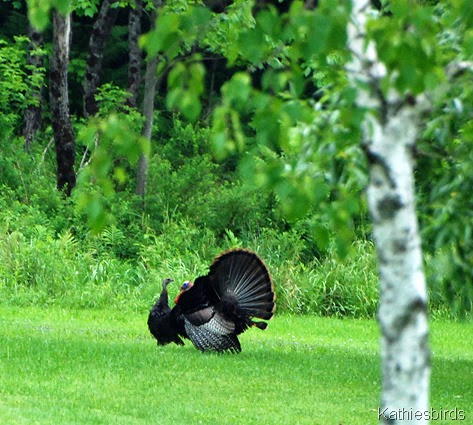 Then a pair of wild turkey wandered into her yard with courtship on their minds! 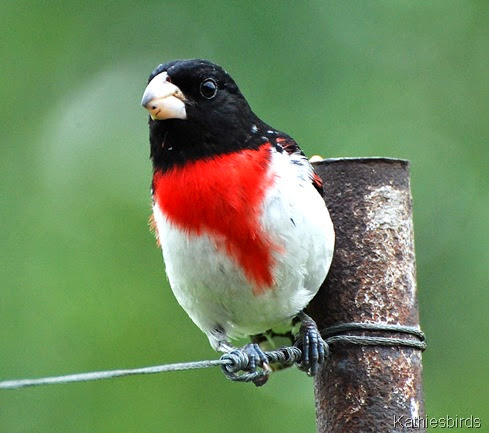 When a bird shows you its heart you have to take a shot!

Yes, this is the male Rose-breasted Grosbeak again!

Then Grace asked me about seeing an American Tree Sparrow that was still hanging around her yard. Tree sparrows are suppose to be far up in Canada right now breeding in the boreal forest, so what was one still doing here? Finally the bird in question showed up. 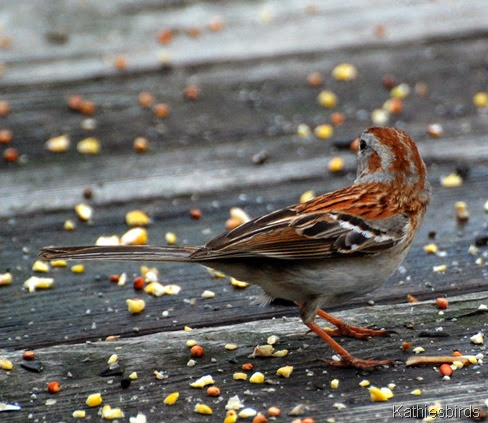 First I saw this… 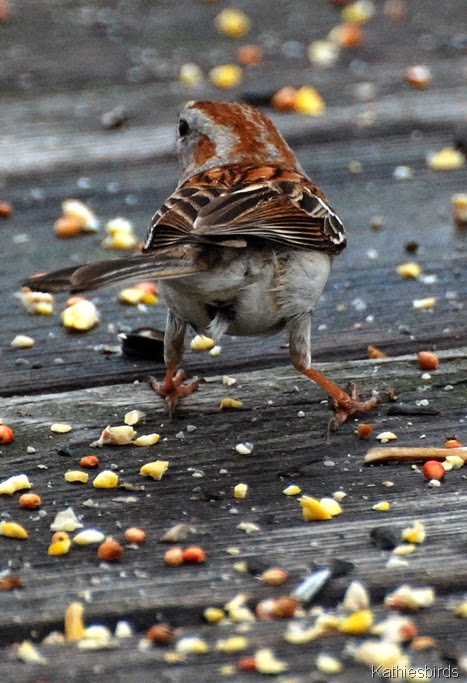 Do you know what species of sparrow this is?

It’s not a Tree Sparrow… 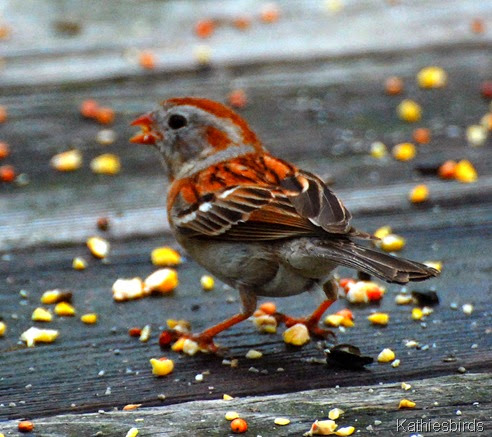 While both Tree Sparrows and Field Sparrows have a rusty cap like a Chipping sparrow, the Tree Sparrow has a central breast spot and a bi-colored bill. That means it’s top mandible is dark while the lower mandible is lighter. This sparrow has a pinkish bill and no breast spot. Both species have an un-streaked breast. Field Sparrows belong here in summer. American Tree Sparrows belong here in winter. I believe this was a Life Bird for Grace as well! I know is was a new yard bird for her! it was also my first Field Sparrow in Maine and my First of the Year for this species! If you look at the Maine bar charts for this species you will discover they are not found in too many locations. Grace has one of the only records in Androscoggin County! While there are many fields down near the coast where I live, I have yet to see or hear a field sparrow in my neck of the woods! And believe me, i have looked and listened for them! 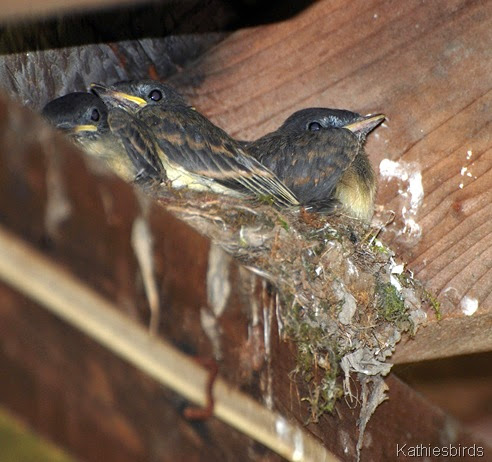 Of course, it is nesting time and we did see these sweet Eastern Phoebe chicks in their snug nest under the eaves of her garage! We passed them as we went out to take a walk along her county road. 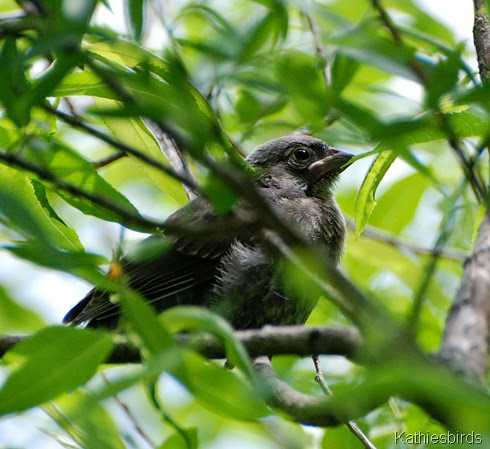 We spotted a fledgling catbird in a hedgerow alongside the road. 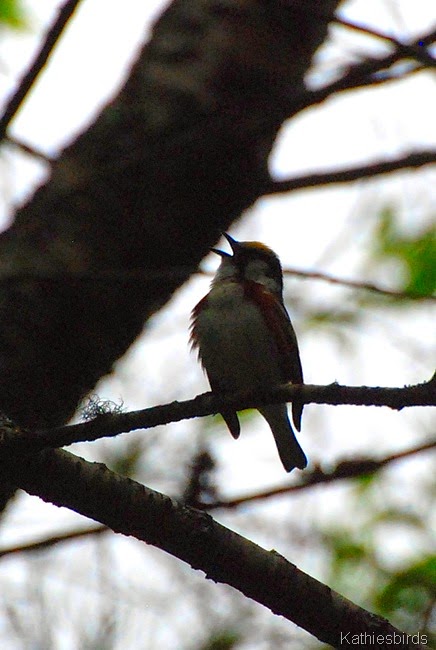 Across the street a chestnut-sided warbler belted out its spring song!

It sang that it was pleased to met us! 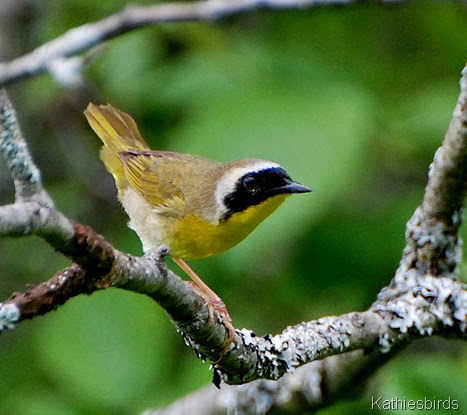 In the same area we found a male Common Yellowthroat.

As we walked back up the street I heard and saw a ruckus overhead! 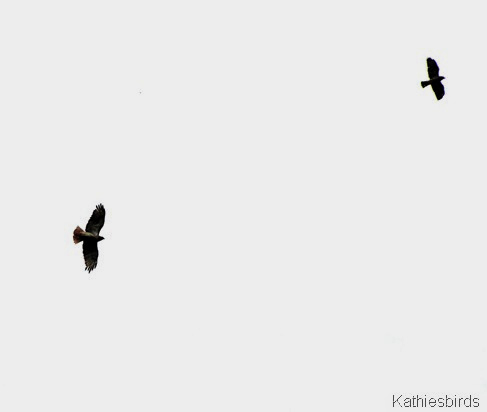 A Red-tailed Hawk was mobbed by some smaller birds, and then a Broad-winged hawk joined the fray before flying off!

I was having such a great time and we were seeing so many birds that I stayed far longer than intended. Thank you so much Grace for having me over to visit. I was so Pleased to Meet You! Hopefully was can do coffee and birds again? 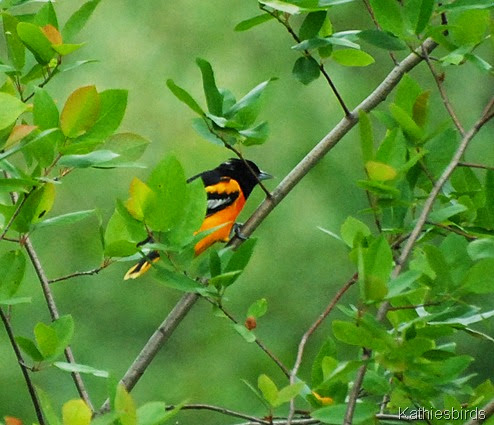 Check out her blog at Grammie’s Ramblings 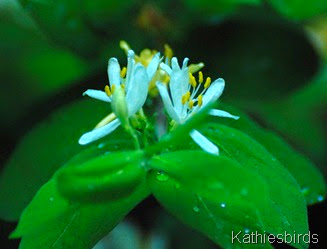