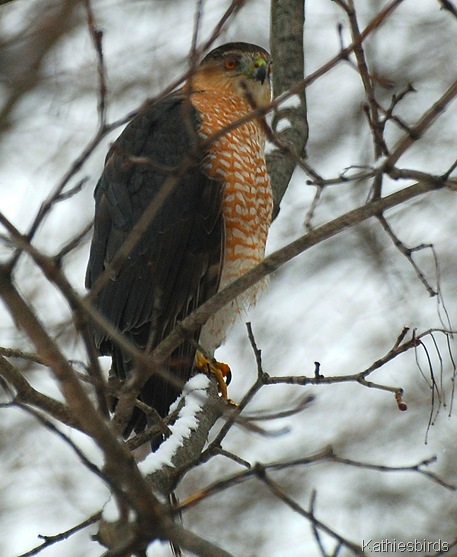 After two days in arctic temperatures I awake to yet another snow fall. Soft feathery flakes drift slowly from the sky coating the yard and the road. As usual the small sparrows and juncos are collecting beneath my feeders while chickadees and titmice land on the feeders themselves. A bright red male cardinal comes in and huddles against the feeder as if trying to hide while it eats. As for me, I am wandering the house from window to window with coffee cup in my hand looking out to see which birds are where. It is while I am in the front office that a large dark shape flies swiftly by giving me a jolt no cup of espresso could ever do. 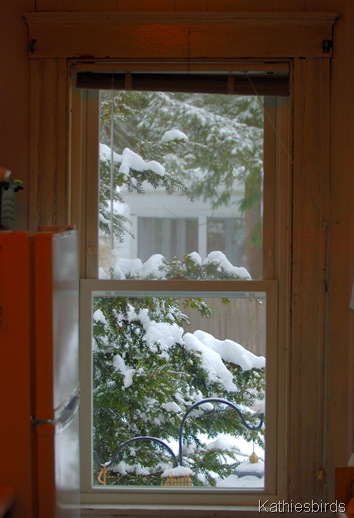 The room where my office sits is on the southeast corner of the house with windows looking out in both directions. The feathered warrior flashes past the south windows and courses low over the snow on the east side where it pierces the branches of the snow-covered yew tree like a missile! Birds fly everywhere. I grab my camera from off my book shelf and walk swiftly to the kitchen window. My heart is pounding the whole way. Will it still be there, I wonder? Earlier this month a sharp-shinned hawk landed in the same tree near my feeders and surprised me by hanging around for a few minutes and even dropping down onto the ground and walking around. So, I hurry hopefully to the kitchen window, which is closest to the feeders. 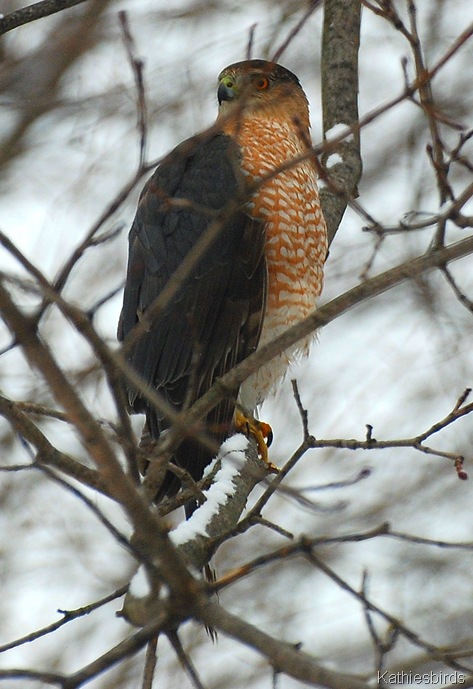 I scan the dark green tree for any signs of the bird’s presence, but see nothing. Then, by twisting my head and contorting my body I look up and to the northeast. There in the naked maples above the yew sits the hawk! He is magnificent! His rusty breast is bright against the gray branches and white snow. The capped appearance of his gray head and his large size lets me know that he is a Cooper’s and not the similarly colored Sharpie, which is much smaller and has a more hooded appearance to its head. 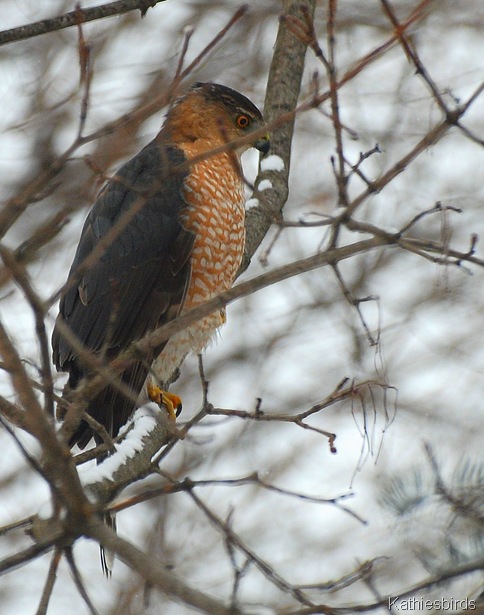 The hungry raptor scans the trees with a fierce red eye. Suddenly he spots movement and darts into the yew. He flies deftly through the branches and emerges on the other side chasing some small bird. Up and over the road he flies into the neighbor’s hemlocks. I watch as he weaves his way between branches going ever upwards towards the sky and then I see the small bird flying frantically with Cooper’s in hot pursuit until they both disappear into the distant trees beyond my neighbor’s yard. 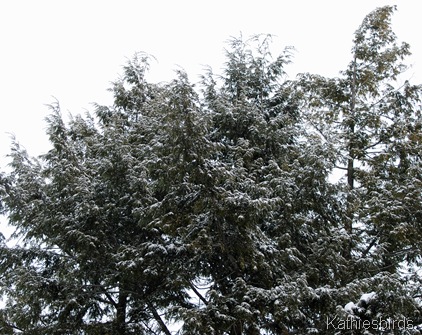 How does this story end? I cannot tell you. One bird needs to eat. One bird wants to live. One will win and one will lose. It is the cold, harsh reality of winter here in New England. The snow has stopped for now, but yet another significant storm is headed our way tomorrow. For today I am warm and safe inside my house with my own window on nature right here in the middle of a New England town and with action like this, who needs coffee! 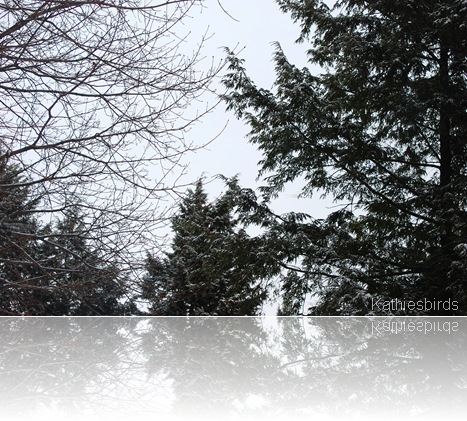