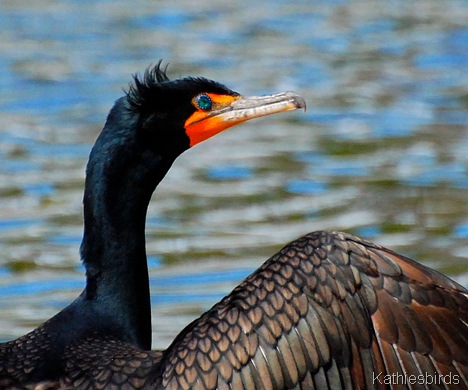 I was up before dawn counting birds on this first day of the Great Backyard Bird Count. However, the birds were smarter than I was and didn’t arrive until after 7:30 AM in my backyard! Still, the house finches, goldfinches, Gila woodpeckers and morning doves became part of my first eBird submission of the day. It’s a big deal this year because eBird has merged the GBBC with eBird. They used to be two different programs with two different protocols which required one to submit checklists through both data bases, but now it can all be done in one fell swoop, made even easier if you download the BirdLog app from eBird while it is still on sale for 99 cents! If you are already an eBird user then all you have to do is count birds and submit through eBird like always. Your checklists will automatically be entered into the GBBC. 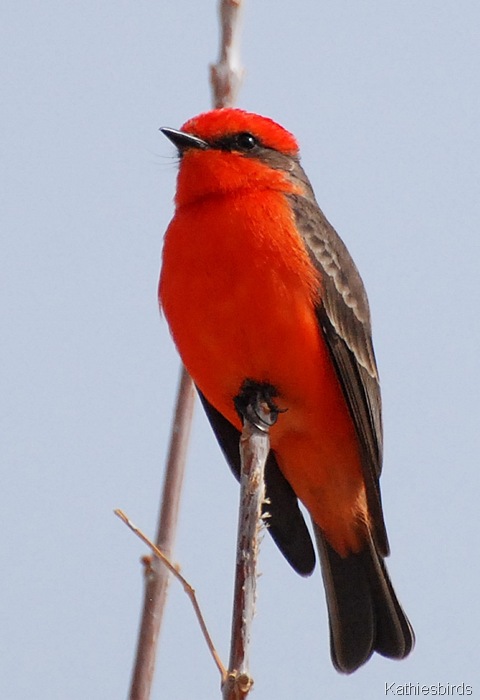 I planned to go birding at some of the parks around my area of Tucson but when Chris Rohrer called and said he had time to bird we made plans to meet at Reid park and bird together for the morning. I arrived around 11:25 AM and met Chris at the north parking lot with his dad and partner. As I drove in to park I was already seeing European Starlings and Great-tailed Grackles. But more numerous than those species were the pigeons! We were literally surrounded by them! I quickly counted them, then paid them no mind as I was distracted by a pair of Vermilion Flycatchers! 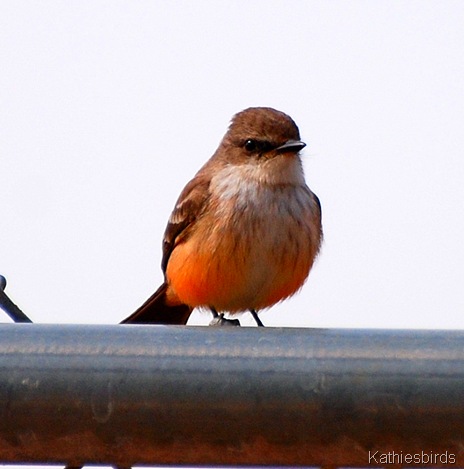 We slowly worked our way down between ball fields and over a tree covered knoll where we found Yellow-rumped warblers and a Ruby-crowned kinglet. 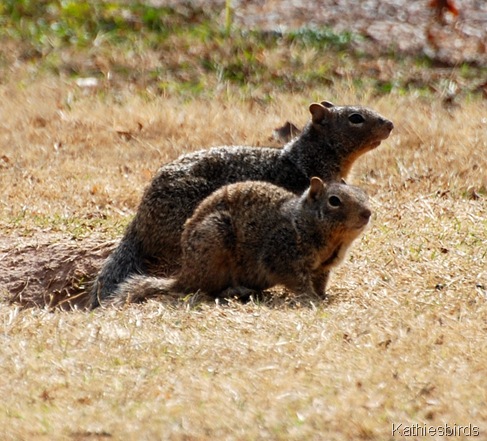 Down near the rose garden we found a pair of rock squirrels! 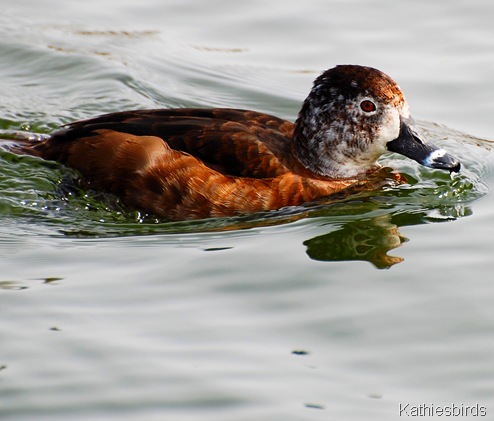 When we reached the first pond we started counting ducks. This strange duck swam by that looked to me like some kind of hybrid with a Ring-necked duck. It has far too much white on its face, but you can still see the characteristics of the ring-neck with the eye ring, the bill, and the overall body coloring. 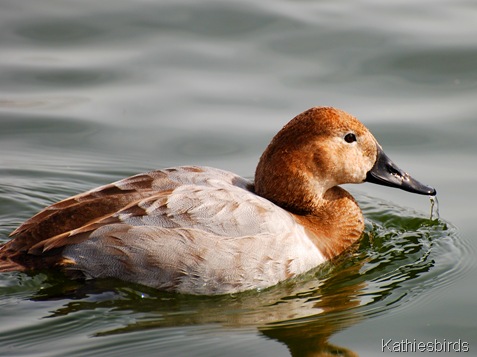 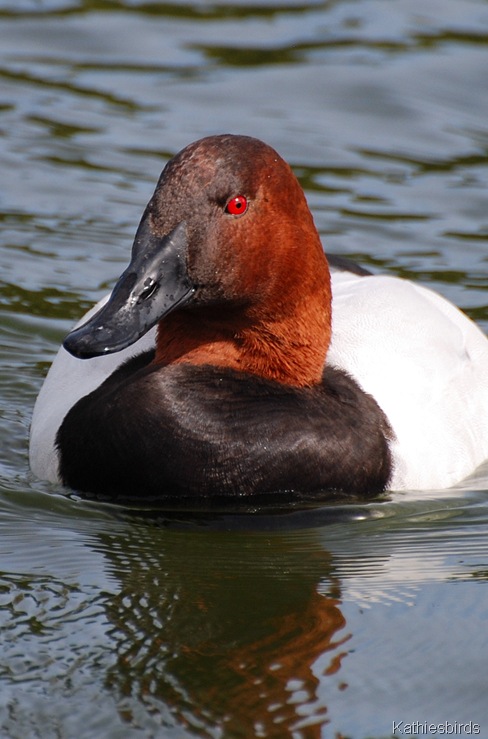 In the north pond we found widgeons, coots, canvasbacks, a few mallards and domestic ducks, as well as a pied-billed grebe and some black-crowned night herons. More flocks of pigeons flew around and past us as various visitors to the park brought bread to feed to the ducks. Flocks of ducks and pigeons would fly from one side to the other, wherever they thought they could get some free food. It was amazing to me to see wild ducks that are usually so shy and wary acting like any other domesticated duck! Mixed in with the widgeons were also a couple of Redheads and Ring-necked ducks. 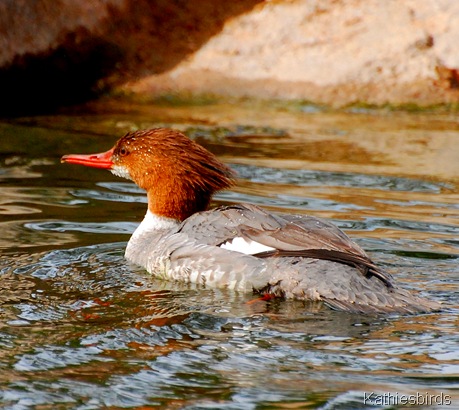 In the more southerly pond that is located closer to the playground and 22nd street we found more widgeons, coots and mallards along with more domestic ducks and geese. But, we also found this lone Common Merganser and a great egret. 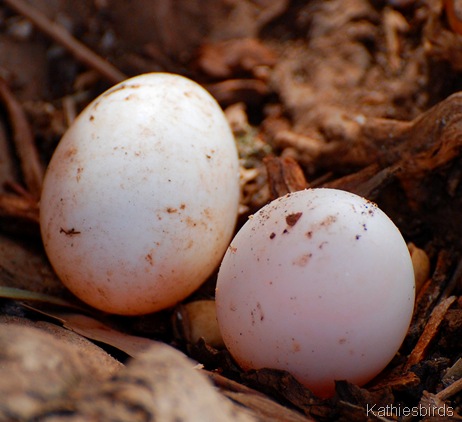 Nestled against the roots of a tree I found some eggs that will never hatch.

But the big attraction for Chris and I were the cormorants! 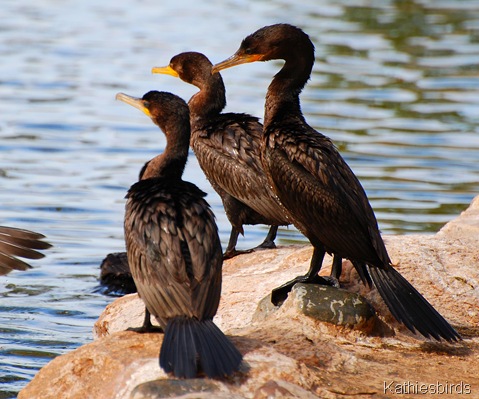 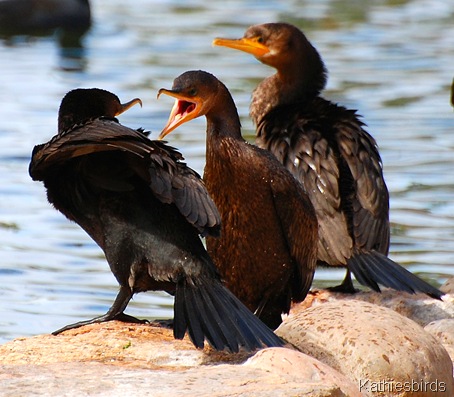 We had seen a flock of cormorants flyover when we were standing on the shore of the north pond. In that flock seven of the birds looked the same, but one looked larger and heavier. Could it possibly be we wondered… 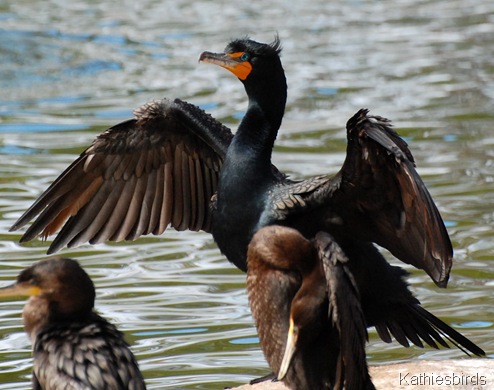 When we saw this face and this display we had not doubt, it was a Double-crested Cormorant! In most parts of the county that would be no big deal Heck, I had seen hundreds of double-crested cormorants while in Alabama a few years back! But here in Tucson we tend to get the Neotropic Cormorants more often, so these guys are a little more rare for us! 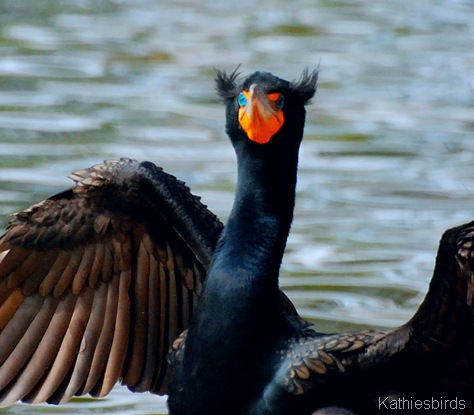 With those “horns” he looks like a dragon to me! 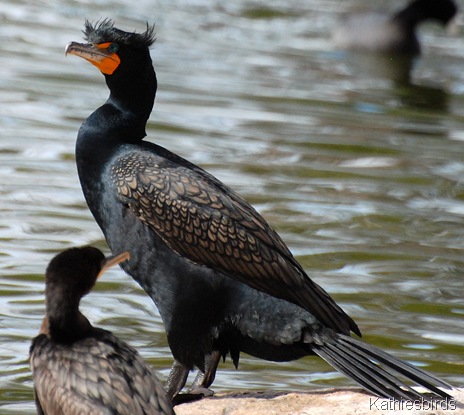 This guy was on display the whole time we were there. I took over 150 shots of him. It took me all evening to process photos for this post! But, hey, I am finally caught up and posting in real time! This feels good! Chris and I finally tore ourselves away from the cormorants and headed back to our cars. We went our separate ways after this. I went home for a late lunch and a quick nap, then headed out for Lakeside Park! 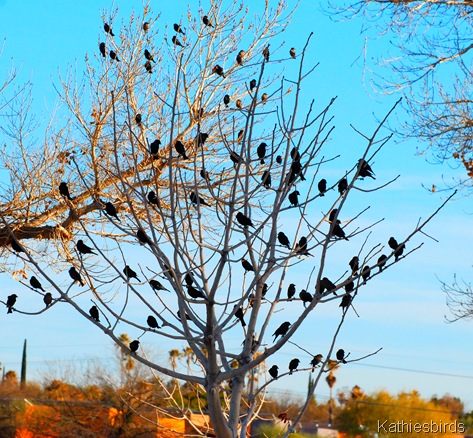 It was late afternoon when I arrived and golden sunlight bathed the world around me. A flock of cowbirds flew up into a tree… 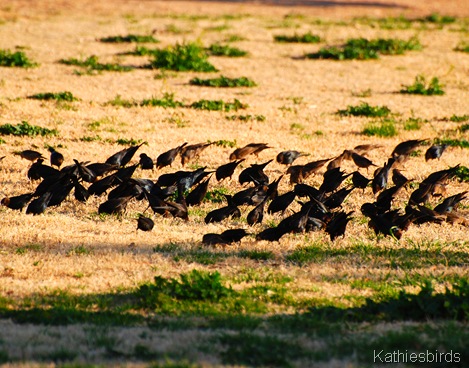 …then landed on the ground again and resumed feeding.

The widgeons and other blackbirds decided to graze as well. 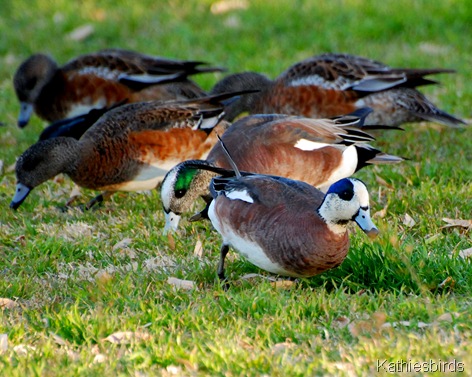 Hey, take a look at this widgeon with the white face! Looks like the domestic ducks at this pond have been up to some hanky-panky as well! Along with widgeons, coots and mallards, I also found a lone female Bufflehead out in the middle of the lake too far for me to get a good photo of. She was soon joined by a Neotropic cormorant here as well. There were not herons here tonight , but I did see one Great Egret and a lone Vermilion flycatcher. As usual, there was just about every species of blackbird here except yellow-headed. I wanted to get at least one more bird count in before it got too dark, so I left and headed for Michael Perry Park along the Pantano wash. but when I pulled into the parking lot and  saw that it was full of cars and the people from those cars were all over the park and on the trail I decided to go someplace a bit more peaceful. So, with the sun quickly sinking behind me in the west I headed for Saguaro national Park. I wondered if I would get there in time before they closed the gates, and, I wondered if I would even see any birds this late in the day. 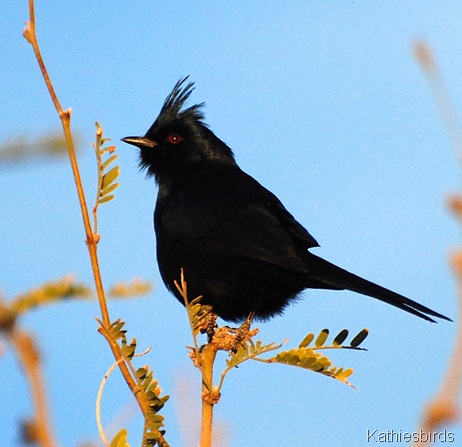 I was happy to see the gate was still open as I drove through the parking lot and into the park. I turned immediately right and headed for the Javalina Picnic area as I did not have time to drive the 8 mile loop road. Nor did I want to. I wanted to just sit and relax and watch birds. Since there was no one behind me I drove the 1.6 miles to the picnic area very slowly and with my windows down so I could se and hear birds. When I found a lone male Phainopepla alongside my car I stopped and snapped his picture. He was the only Phainopela I saw in the park this evening. In that short distance to the picnic area I counted 1 phainopepla and 6 black-throated sparrows. It took me 10 minutes and that was all I saw. 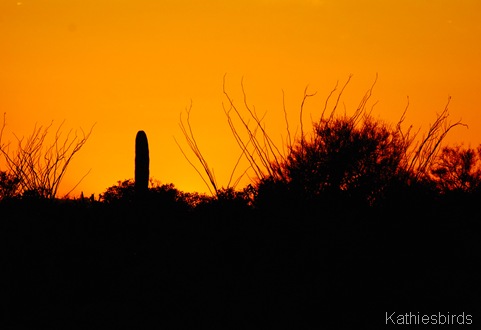 The shadows were already long and deep when I pulled into the parking lot at 5:55 PM. I quickly parked and counted yet another small flock of Black-throated sparrows feeding in the brush around the picnic tables. I did a quick walk about to see what I could see, then stationed myself atop a large cement picnic table and watched birds while the sunset. I soon heard a gilded flicker, a cactus wren, and a curve-billed thrasher. House Finches twittered and flew overhead. the mournful song of a mourning dove drifted over the small canyon where I stood. then I saw them fly, first one, then a pair, then a coupe more and the doves sought refuge for the night. In the west the golden sun threw fire at the sky before dropping below the horizon and softening to peach and apricot and watermelon. It was then I heard the gentle hooting of a great horned owl drift down the mountainside. Over and over it called, like a twilight lullaby. I listened for as long as I could, then climbed down from my perch and headed home. 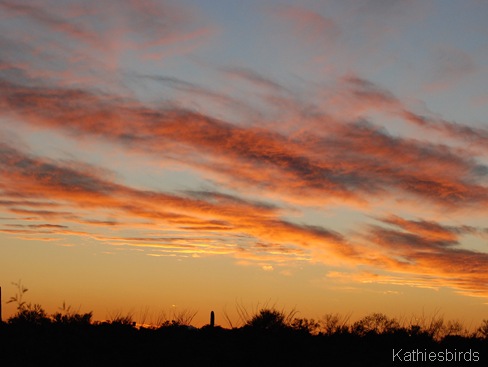 Are you counting birds this weekend?