Notes From My Nest: Back From Yellowstone and Beyond 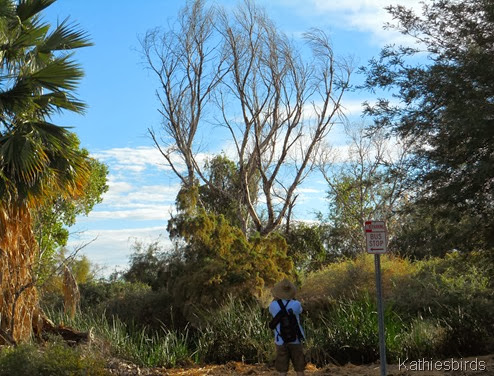 Well, as you can see, I am back from my trip to Utah and Yellowstone National Park with my husband Gus. We had such a great time but I must have been running on adrenalin, because as soon as I got back I crashed and slept for 3 days. I had no energy to do anything, until Chris Rohrer called me on Tuesday and invited me to go birding at Sweetwater Wetlands with him after he got out of work. I decided that maybe a trip out of the house would be good for me, so, in spite of the heat I got all my birding gear together as well as a cooler full of cold drinks and I headed out to meet him. Little did I know how hot it actually was! When I left my driveway my car thermometer said 98F. By the time I pulled into the Sweetwater parking lot it was 104F! The east side of town tends to be a bit cooler than the west side, but, since it was already almost 5 PM I got out of the car anyways and went searching for birds. Sweetwater never disappoints and we had a great time. As the sun set the temperatures dropped and we sat in the darkness going over bird lists! 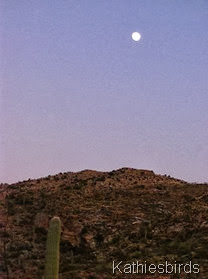 so he could see the nectar feeding bats. Gus and my son were watching football, so that left me free to watch birds and bats. At first Chris and I went for a drive through Saguaro National Park-Rincon Mountain Unit where, to our utter amazement we found a lone lesser nighthawk slicing through the dusky sky, and then we heard Common Poorwills calling from three different locations along the 8-mile loop road! We were there long enough to watch the full moon rising over the Rincons but when we stopped to take a photo the park ranger came along and chased us out!

Back at my house Chris went out on the patio to photograph bats. I was a bit squeamish about going out there with the bats myself, but eventually I joined him. The bats were whizzing by his head and hitting the feeders on a regular basis. I have hummingbird feeders on the first floor patio as well as one on the upper balcony. Once Chris got some shots of the bats at the lower feeders we decided to take our dinner up to the balcony and eat it and watch bats there. 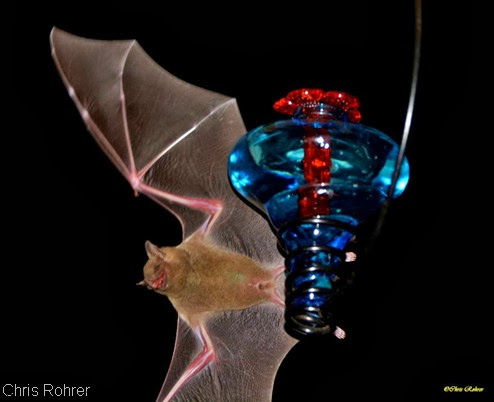 I have a string of Christmas lights to illuminate the lower patio and the bats don’t seem to mind it, but when I turned on the string of lights on the balcony so we could see to eat and then watch the bats all the bats disappeared! We sat and waited and watched, and then Chris noticed some movement overhead. He quickly stood up and photographed the ring-tailed cat which was on my rooftop again! Oh my! I guess it is coming here on a regular basis to try to catch bats! The hummingbird feeder is suspended from the edge of the roof and easily reached from there. The first time I saw the ring-tailed cat it was learning over the edge of the roof and watching the bats. This time it ran to the opposite corner where Chris snapped its face peering down at us. I quickly moved my chair as far away from the roof as possible. I did not want that thing leaping down on me! However, Chris was in total awe and amazed by this magnificent wild animal. He had never seen the nectar feeding bats or a ring-tailed cat, and now he saw them both in one night! I was happy for him! 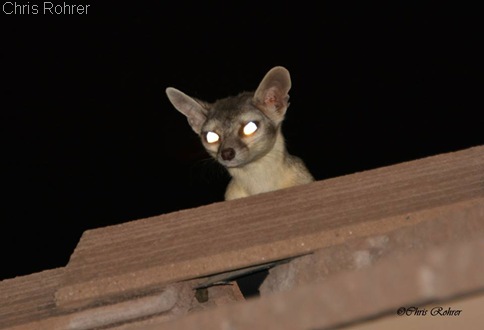 The bats never did adjust to us being out on the rooftop, even though I did shut the Christmas lights off, so finally we went inside. While we were up there Chris and I had heard the ring-tailed cat climb down the side of my house. When I walked Chris out to his car we both noticed a funny smell. It was awfully strong. I wondered if there were javalina nearby as everyone says you usually smell them before you see them, but Chris said, No that was not a javalina smell. So, then I wondered if that ring-tailed cat had sprayed somewhere. I thought I remembered reading that they have a very strong musk. Well, we both started wandering around sniffing and between the two of us we zeroed in on a shiny wet spot right at the base of my front yard mesquite tree! That darn cat had spayed my yard! By then Chris and I had both had enough adventures for the night, but we both felt proud of ourselves for being such good nature detectives! So, he got in his car and drove home while I went inside. The football game was almost over and I spent the rest of the night watching TV with Gus. The next mooring I was out the front door, lickety-split to check on the spot where the ringtail left its mark. While it didn’t smell as bad this morning, the stain was still shiny, like syrup or something. I warned my son not to step in it, in case the smell sting lingered! Did I mention that I live in suburbia? Yeah, the police station and the library are just down the street, yet I have all this wildlife right in my own backyard! That’s Tucson for you!

As if I hadn’t had enough birding, I went out Friday morning to Michael Perry Park to count birds. It had been awhile since I have been there and I really wanted to see what birds where hanging around or moving through the area. The big difference was the lack of White-winged doves. I did not see one! But a few warblers were moving through and I saw a Common Yellowthroat as well as a MacGillivry’s. The morning started out cool and breezy but soon warmed up with the rising sun. I was there for an hour and half and counted 19 species of birds. For the most part I had the place to myself but as I reached the farthest end of my transect along the wash and turned to go back to the parking lot an older man came walking towards me pushing a bike. I didn’t think much about it until he decided he needed to talk to me. 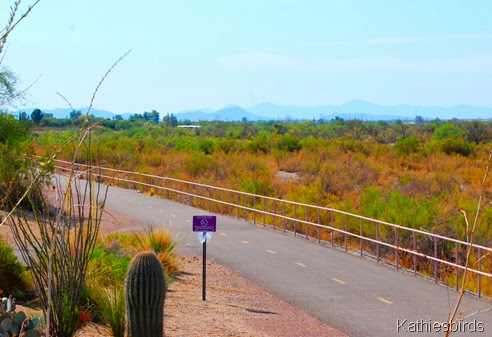 The trail at Michael Perry Park

The guy’s hair was sun washed silver. He had a toothless grin. In his hand he carried a can of Twisted Tea, though I didn’t notice what kind it was at first. He started by telling me about a rattlesnake he saw on the trail, so I listened to him out of concern, but then he tells me he saw it way over on 22nd street somewhere, and not in this park. Next thing I know he is launching into the story of his life and how he fell asleep along the Rillito River Walk yesterday, then moved on to fall asleep in another park where he woke up just in time to get to work at four in the morning! Then somehow he got on the subject of a Shakespeare play that is going on in Himmel Park tonight and, Oh, he pointed out that he was drinking Twisted Tea because his boss gave him a couple of cans for staying late to work this morning. So, he was drinking alcoholic tea for breakfast? Anyways, he seemed friendly enough but I was slowly inching my way away from him step by step. I finally told him thank you for all that information but it was getting very hot out there and I had to go! This birding life is so crazy at times. I just never know what I am going to see or learn!

Our trip to Utah and Yellowstone was wonderful. We had such a great time and I have lots of picture to offload and process. I am also still trying to finish posts from this summer. Hopefully I will get it all done before the New Year arrives, which isn’t as far away as it seems! Yikes! Meanwhile, I will keep on birding!

A big “THANK YOU” to everyone who visited my blog while I was gone and left a comment. I am doing my best to get back to you all and visit your blogs or answer your questions! And thank you Chris Rohrer for the use of your photos!