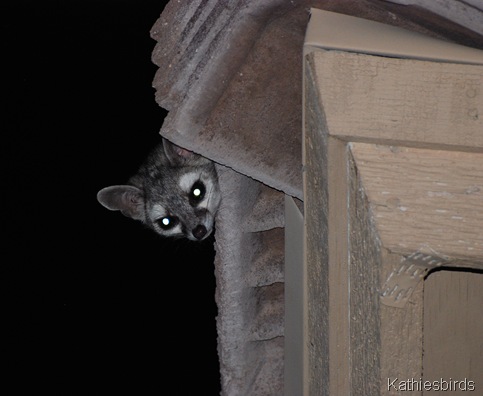 Last week I was surprised to discover the nectar feeding bats had found my hummingbird feeders here in Tucson. I thought I lived too far inside the city for them to venture in. Since then they have been hitting my feeders every night and draining them so that I have to clean and re-fill them in the morning. But if I thought the bats were a surprise I was in for a shock because on the night of August 30 as I was peeking through the blinds to watch the bats feeding from the nectar feeder on my balcony I suddenly saw a small head with round ears and a pointy nose watching the bats at the feeder. I had no idea what kind of creature it was but it looked like it wanted to capture a bat and eat it! It looked like it was hunting the bats! I quickly put a query out on Facebook as I had no idea what to even look up and a nearby birder, photographer and blogger named Kelly Rishor suggested it might be a Ring-tailed Cat. After a quick Google search it was confirmed!

Oh my goodness! I had a Ring-tailed cat on my rooftop! Strictly nocturnal, these raccoon-like creatures are omnivores who will eat just about anything! They have a long, banded tail like a raccoon and are in fact related to them. The info I read online said they can actually scale a vertical wall and I can only guess this one got on my second story rooftop by climbing the front yard mesquite trees and leaping over onto the roof. Now my challenge was to get a photos since it was pitch black dark! Not being brave enough to go out on the balcony with the bats, I went out the front door with my camera and a flashlight. I had to try to hold the camera and the flash at the same time to get these shots but I got them! 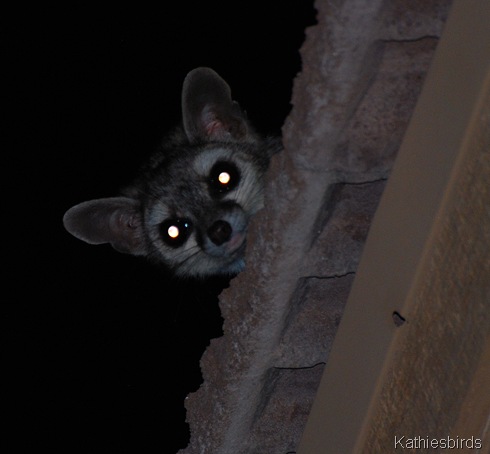