Birds at the Ball Field 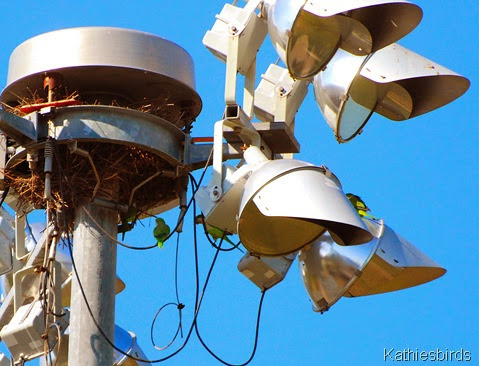 While on vacation in Florida I had seen on eBird that there were Monk Parakeets being seen on a regular basis at a Place called Pelican Blvd. Baseball Fields in Cape Coral, Florida. Since I had only seen Monk Parakeets one time before at the Green-Wood Cemetery in Brooklyn, NY, I really wanted to see them again and get them on my Florida Life List. After yet another futile attempt at finding the Florida Scrub Jay I drove to Pelican Baseball Fields as I tried to decide where to go birding on this one full day when I had a car available to me. 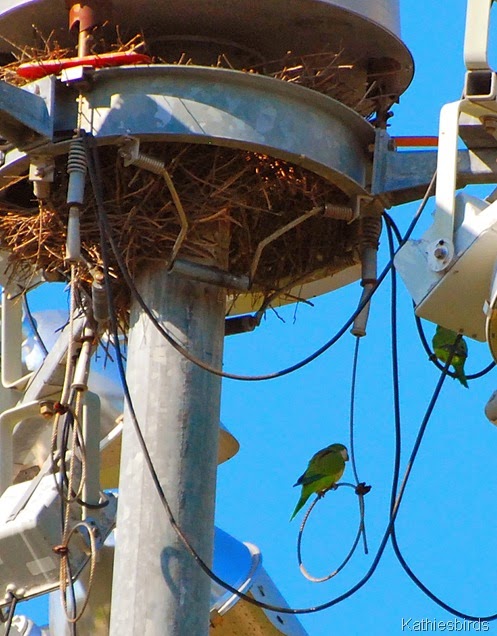 As soon as I parked the car and opened the door I could hear these birds. They are so noisy! Apparently they like to talk to each other because they kept up a constant conversation. There are four different ball fields here at the park with several of these lighting towers and in several of the lighting towers there were Monk Parakeet nests. 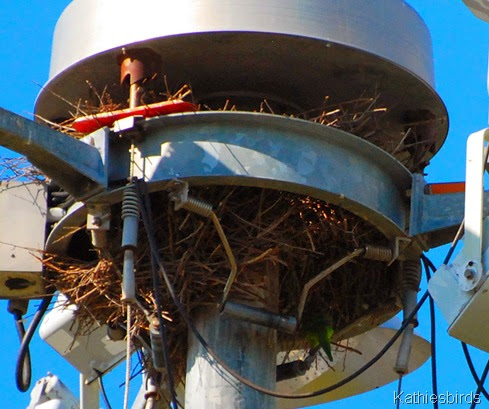 I was impressed by their size and their construction. 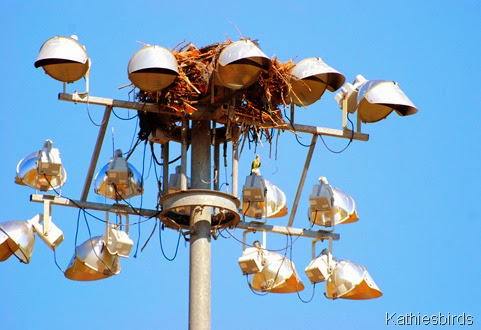 This is a different nest from the one picture in the first 3 photos. 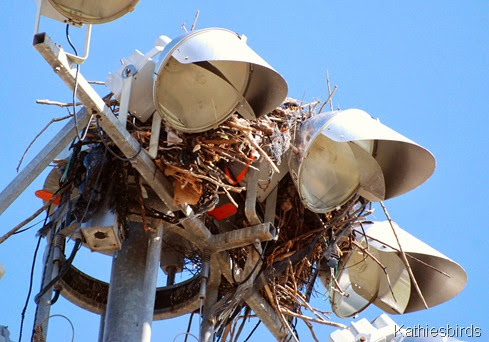 I was NOT impressed to see all the trash woven in, however.

The birds, of course, are excellent weaver, but it was sad to see garbage in the nests. However, I did get to see one parakeet flying with yet another stick to add to the nest. I was very impressed with their ability to fly with such large and awkward objects! The day was already getting quite warm, so I was standing in the shade of a tree near the parking lot when this cute bird flew over to investigate me! 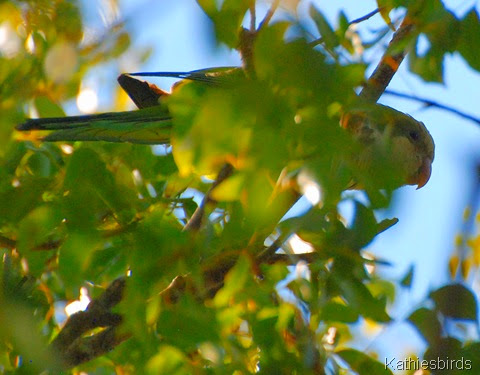 But Monk parakeets were not the only birds on the Ball Field! This was quite the noisy place as Fish Crows cried their nasal cries, grackles raised a hullaballoo, and Osprey screamed overhead. 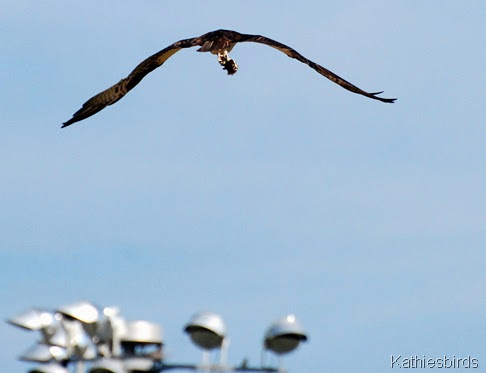 I first saw one fly by with part of a fish in its talons.

At first I feared it was a parakeet! 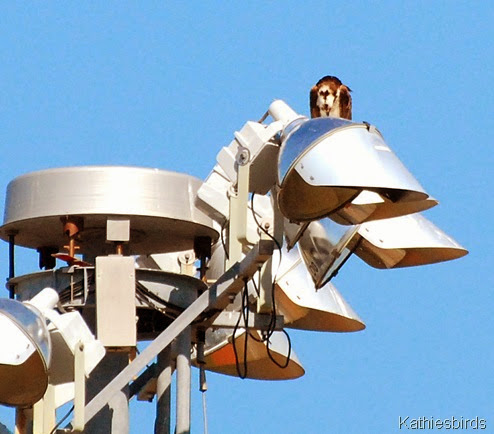 Then it landed on a lighting tower to consume its breakfast. 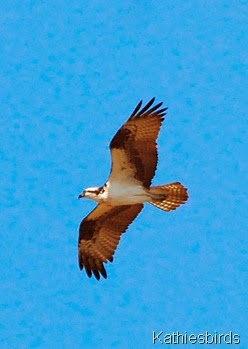 But then another osprey flew in! 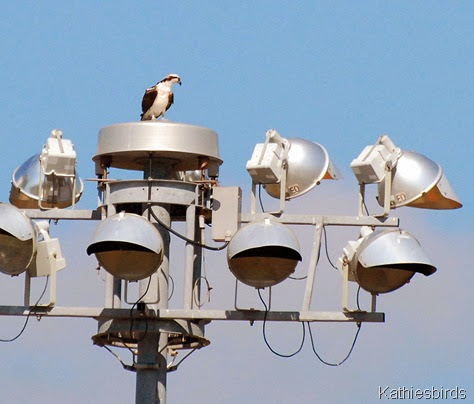 It chose a different tower to land on. 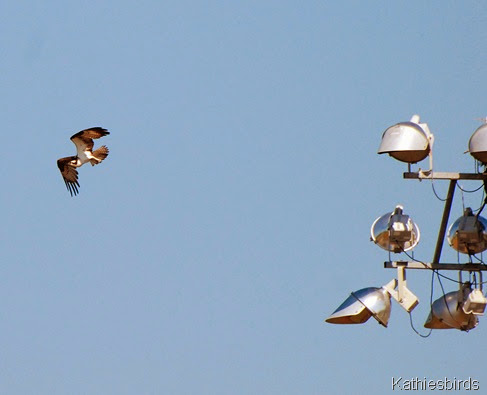 Soon there was yet another! I saw three osprey!

I noticed there were no Monk Parakeet nests in the lighting towers the osprey use, but one of the towers had an osprey nest on it. I don’t know why I did not take a picture of that! 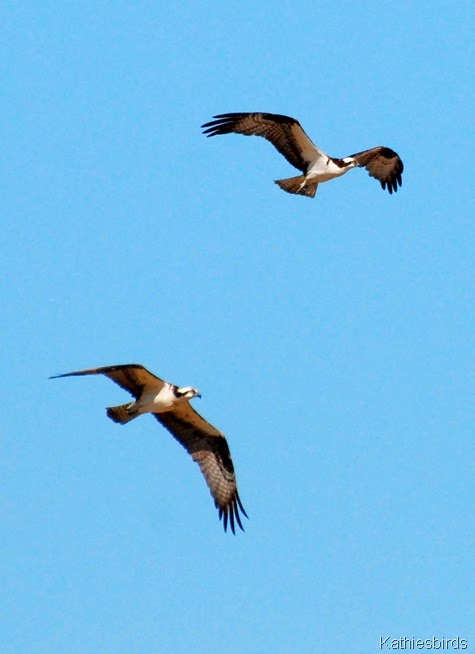 I was finally able to get at least two of the osprey in flight together.

Meanwhile, on the ball field there were gulls galore walking around and eating something off the ground. All four ball fields had Ring-bills, Laughing, and Herring Gulls. This was the only place in Cape Coral where I saw Herring Gulls. What surprised me though was that after being there for about a half an hour all of a sudden it was like someone said, “let’s blow this clambake,” for in one moment all the gulls lifted off, circled over head a few times and flew away! If I had arrived here at this time I would never have even seen a gull on the field!

These are the birds I saw at the Pelican Blvd Baseball Fields on March 4, 2014: 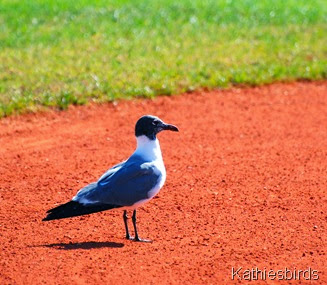