Notes from My Nest: Window Birding 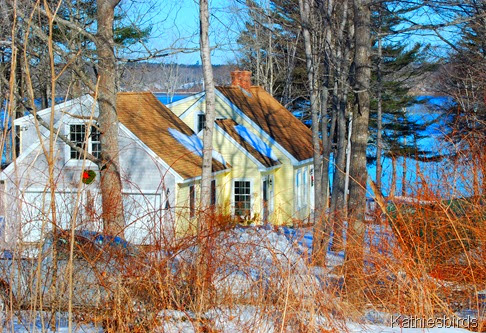 It did not take me long to hang up bird feeders in my new yard. In fact, I bought a thistle seed sock and some seed bells to hang even before we moved in. The first two weeks of living here were birding bliss, because the squirrels had not found my feeders yet. However, the day before I left for Florida I saw my first squirrel. 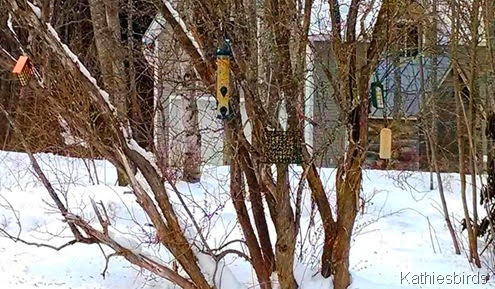 By the time I returned all my feeders were empty, and the plastic tube feeder I bought was on the ground and chewed to bits! I had to rethink my bird feeding and fast! With all this snow and the ground being frozen, I cannot put a feeder pole into the ground yet, but once the thaw comes it is my hope to set up new feeding stations. Until then, I dependent on what I can hang from windows and bushes. 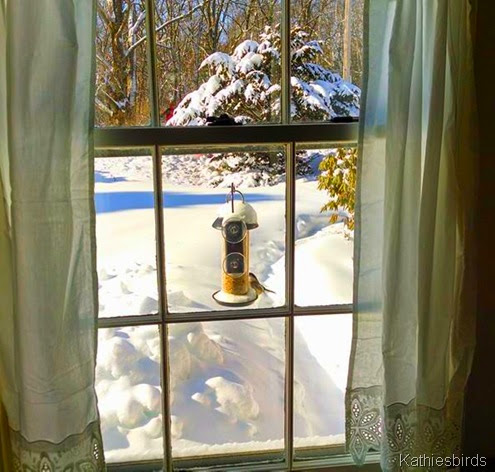 Bird Feeder with chickadee at my kitchen window 2-16-14

Besides counting the birds in my yard and at my feeders, I also can count the birds seen in Maquoit Bay on the northwest side of the house. I can just see the water through the trees, but there are only a few peek-a-boo views of open water through the trees and brush. Often I do not see any birds this close to shore, but on March 18th I saw there were ducks down in the water. I got my binoculars and camera and started trying to identify birds. 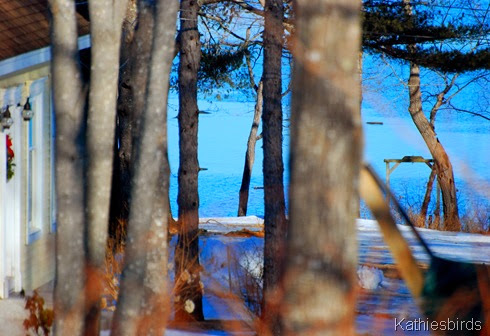 I have to look downhill through the trees to these few open spots. I could see the ducks diving and resurfacing as they swam back and forth along the shore. Taking a photo is challenging due to the angle, and the distance and the window glass! So, I focused on an open spot and prayed the birds would swim by. 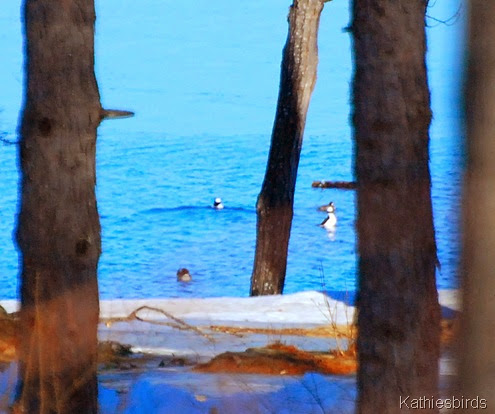 Though these pictures are bright and blurry you can still tell that these birds are Buffleheads. The males are white with black wings and back and the white “Bufflehead” they are named for. The females are a duller black with a white cheek patch. But I knew there were more birds down there. 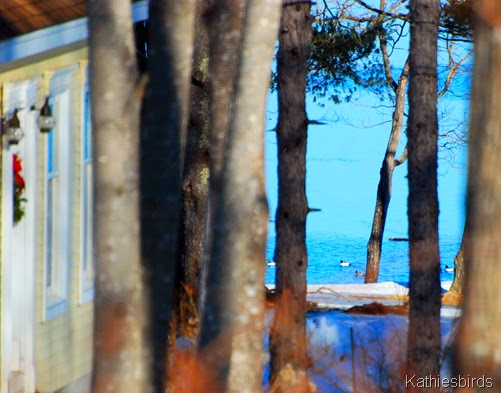 Once again some ducks paddled by the opening. 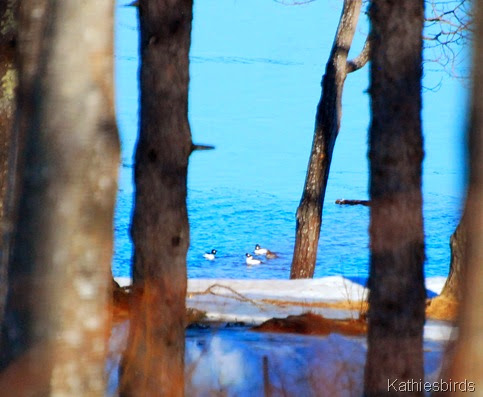 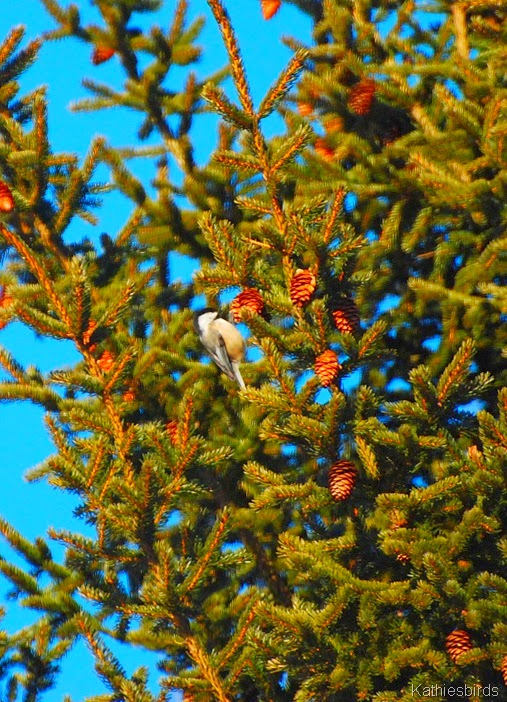 And then, of course, there are the tree rats, A.K.A. Gray Squirrels! 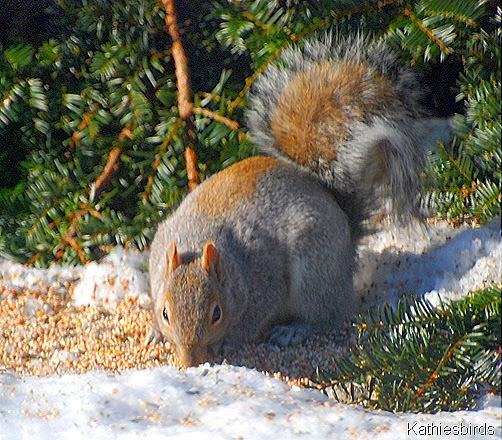 Gray squirrel gobbling up seed beneath the feeders!

In just the past few days I have added a Song Sparrow to my yard list. I saw it for the first time on the 19th and I saw one again yesterday morning when I was out filling my feeders. Song Sparrow, American Tree Sparrow and Dark-eyed Juncos are the only sparrow species I have seen so far in this yard. I keep hoping for a White-throated Sparrow, but so far no such luck. However, I have had Bald Eagles fly over the house a couple of times now. That’s not a bad yard bird to have and I am hoping I will see osprey once they return from the south! Here is a list of the birds I have seen so far since moving to Mere Point in Brunswick, Maine. Please note that I was in Florida for two weeks from February 22nd to March 7th.

(Note: All species below a date were also seen on that date.)

It took me about a week to adjust after my return from Florida. The first two days after I returned I ran around doing errands. Then one afternoon I just crashed and slept for three hours! Finally after last weekend’s gallivanting around I unpacked about 10 more boxes on Monday. I spent a good part of the day down in a cold, dark basement but finally had to come upstairs to warm up and see some sunshine! 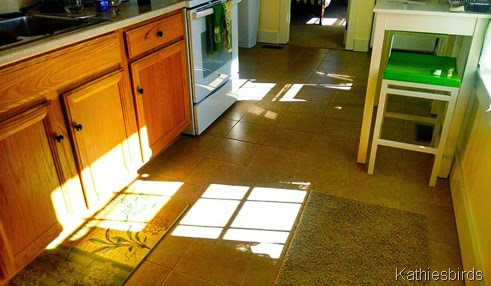 I still have more to do and more things to figure out about where to put them in this small house. Living in a smaller space has forced me to simplify my life. I no longer have space for all my dishes and have had to pack all but what I use on a daily basis away. While I am not willing to give away all my china and family memorabilia at this point, it does make me realize how much stuff I can live without! However, there is a one whole shelf dedicated to bird food and feeders in the basement and I just realized that in about a month it will be time to put out hummingbird feeders! While I won’t see the wide variety of hummingbird species I saw in Tucson, I do hope I will get a few Ruby-throated hummingbirds here! This is my first time living in Maine as an eBirder. My Maine Life List is currently at 121 species and I have seen 44 species in Maine so far this year. I have already added 5 species to my Maine Life List since moving back with Brant, Common Goldeneye, Northern Shrike, Black Scoter and Red-throated Loon and I have already submitted 93 checklists since moving back to Maine! Also, I have so many photos to share that I am trying very hard to write at least one blogpost a day! Stay tuned for more! 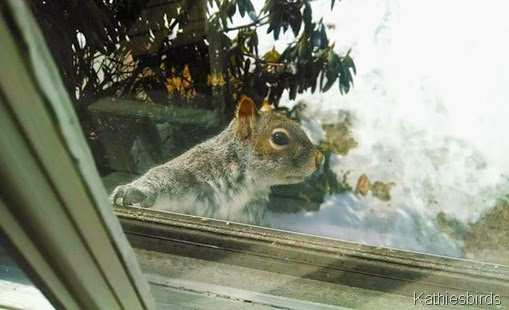