Notes from My Nest: Too Busy! 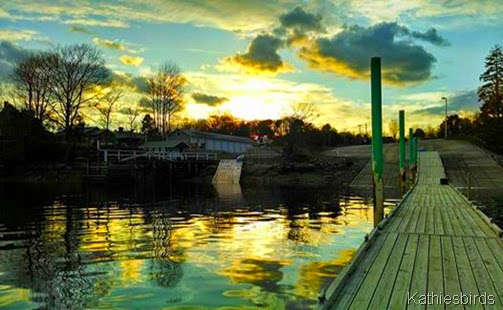 It’s another blustery day here at Mere Point Cottage. Thick gray clouds are rolling like cotton overhead, whipped along by gusty winds. Down in Maquoit Bay the water has been whipped into white-capped waves that roll ever onwards. It’s quite a contrast to the calm, flat water I saw last night when I stood on the shore and watched the watermelon sunset. Then all I heard was a gentle lapping as Common Eiders grunted and growled and Wild Turkeys gobbled distantly in the surrounding woods. Every day is an adventure as I get to know this land and its rhythms. 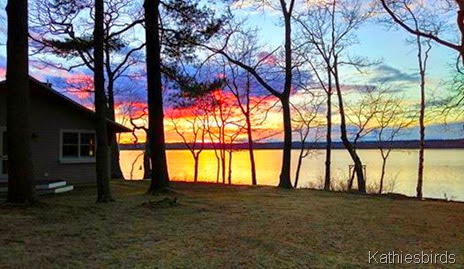 I don’t think I have ever lived anyplace with so many bird species. It seems every day I am adding to my Yard List which has already grown to 55 species. This made me curious so I looked back over the data for all my previous yards and I discovered that I have reached 50 species faster here than in any other yard where I have kept records! Sycamore Canyon in Corona de Tucson currently holds the title of most yard birds with 86 species, but I lived there for three years. If things keep going the way they are I may pass that total in less than a year of living here at Mere Point! Being near the ocean certainly helps as I get both woodland species and ocean species. 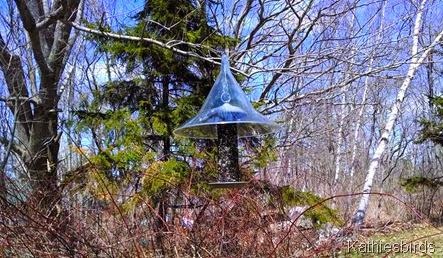 I continue to do battle with squirrels and finally bought an acrylic bird baffle from the Freeport Wild Bird Supply as well as a pole and baffle system with a hopper style feeder. So far both seem to be working just fine, but I have been so busy that I have not had much time to observe birds in my yard. 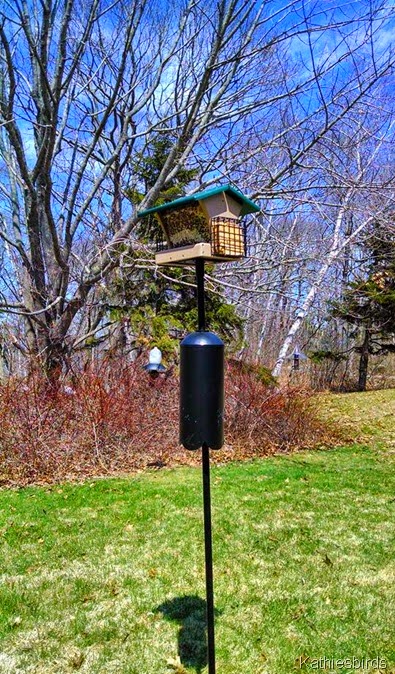 Since buying the baffle and new feeder with pole I have noticed that I am not refilling the feeders as often. Keeping the squirrels off the feeders is saving me money by only feeding squirrels and not rodents! The baffle and this pole set-up were quite expensive but I feel they will be worth it in the end in the amount of dollars saved on bird seed! In the background you can see a cheap plastic squirrel baffle that I bought at Walmart. It is totally useless as the squirrels quickly learned how to get around it. they also have already chewed big chunks out of it along the edges. It was a waste of $8.00! I will be going back to purchase yet another $30 acrylic squirrel baffle for that ball feeder which I like to fill with nuts. It attracts the titmice and nuthatches to the yard. Plus, with all this New England rain, I like providing a dry place for the birds to feed, and dry seed is less likely to mold! 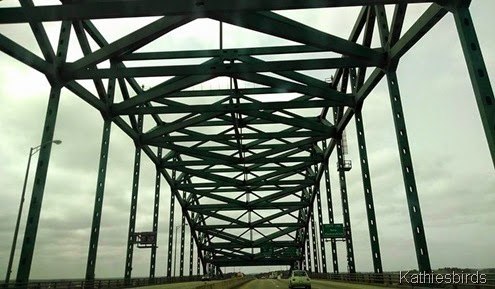 Last weekend Gus and I both went to New York City with my youngest brother. We had a great time but we arrived home so late Monday night that I was exhausted and slept late both Monday and Tuesday. I spent Wednesday buying and setting up the new feeder and baffles and then drove to Bangor on Thursday to pick up my son and grandkids for the rest of the week. 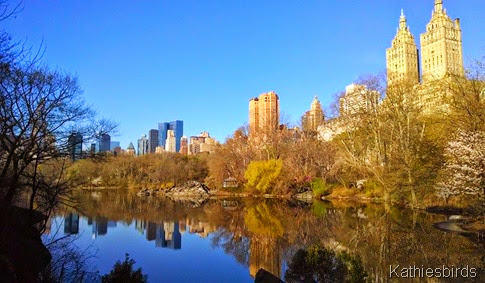 We had a great time with them and we took them to Reid State park on Friday. The kids got to ride in Grandpa’s Camaro, which made them grin from ear to ear! It was Gus’ first time seeing the park and he loved it. He took a long walk on the beach by himself before I joined him. I spent some time with my grandkids, and then set off to count birds. I discovered that they have roped off part of the beach as a nesting area for terns and piping plovers! 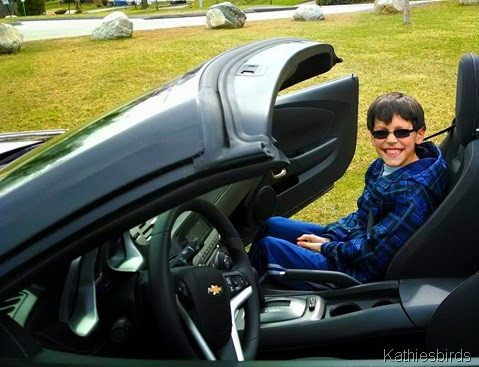 We brought the kids home on Saturday, then stopped to see my in-laws, and though it was raining I could not resist a trip to Oosoola Park to count birds. I did not think I would see much but was surprised to find Eastern Phoebes, Yellow-rumped Warblers, a Savannah Sparrow, a Belted Kingfisher, and a Blackburnian Warbler! The Blackburnian was across the backwater cove flitting about on a dead tree and landing on the ground. Its brilliant orange head and throat positively glowed in all that grayness. I took some blurry photos which I will show you when I have them offloaded. 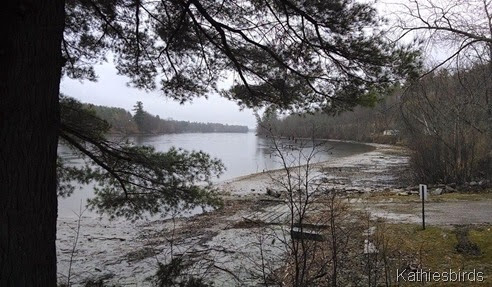 I have never seen the water this low along the Kennebec River but I believe it is because they have open some flood gates farther down river to mitigate the spring flooding that has been happening all over Maine. 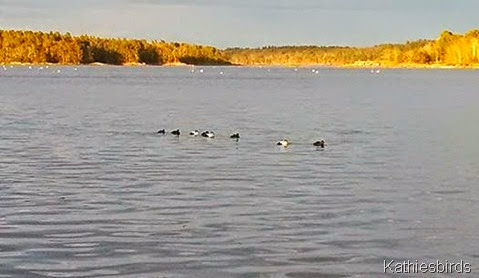 Back here at the point I took a walk down to the Boat launch last night and discovered they have set a floating dock out into the bay. I was able to walk out and look back at the shore for the first time. It was nice to get that perspective. A small flock of eiders floated nearby and I snapped a few photos with my cell camera. 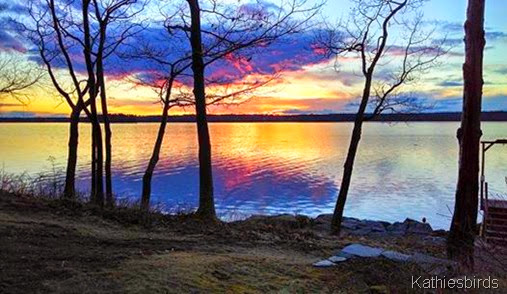 It was near sunset, so I took some photos there, then realized I could cross the street to Maquoit Bay and watch the sunset from there as well. So far we have no leaves on our trees. They are only just starting to put out their buds. A few daffodils are blooming in the woods, but that’s it. We are in that sweet spot where it’s warm enough to be outside but cool enough not to have a bunch of insects buzzing around. It won’t last forever, I know. Soon the mosquitoes and black flies will be out in force and I will be forced to spray myself with pesticides just so I can be outside! It is one of the drawbacks of living in New England.

The craziness is not over. Later this week I will head to Connecticut to visit my mom and sister. It will be the first time I have actually been there long enough to visit my family and count birds. I will head home on Saturday after a Mother-Daughter brunch at Mom’s church to celebrate Mother’s Day. I feel very fortunate and thankful to still have her around! 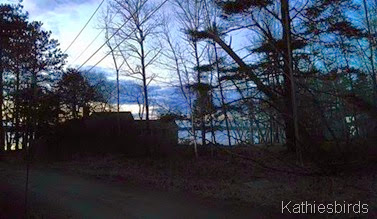