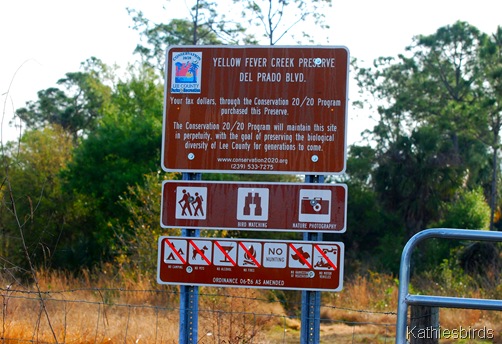 Sign at the gate to the Yellow Fever Creek Preserve

On March 5 I took a drive to the Yellow Fever Creek Preserve. Ever since the day I arrived in Cape Coral, FL I had wanted to visit this place. We passed it on the way to my brother’s house when we arrived and frequently during the next two weeks as we drove around town doing OTHER THINGS. But all I wanted to do was get out and explore and find out what species of birds were found there. Finally, on the morning of March 5th I had my own car to drive and I went right there. I had barely pulled into the crude and empty parking lot when another car pulled in behind me. There were 2 young men in the car and I thought to myself, “Oh great!,” for I did not know if they would be loud and obnoxious or even hunters. I do not know what the hunting laws are in Florida and it was not until I got out of the car that I saw the "NO HUNTING” sign. I decided to put my fears behind me and get out of the car anyways and say Hi. It turned out I had nothing to fear. These young men were very polite and pleasant and they told me this preserve just opened a couple of months ago and they were here to do geo-caching! After a brief chat they went on their way and I never saw them again. After gearing up I soon passed though the gate and into the preserve. 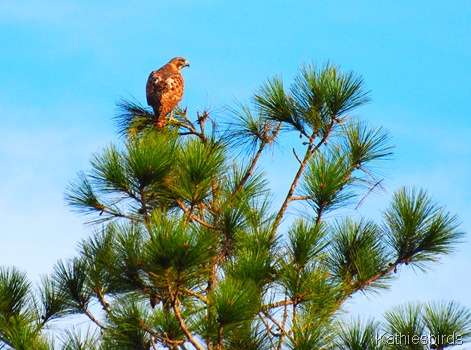 In this part of Florida there are more Fish crows than American crows and I watched as a few mobbed a Red-tailed Hawk and chased it into the top of a pine tree. It watched me warily from the treetop before flying off to parts unknown. Meanwhile I was distracted by the loud and varied song of a bird singing. 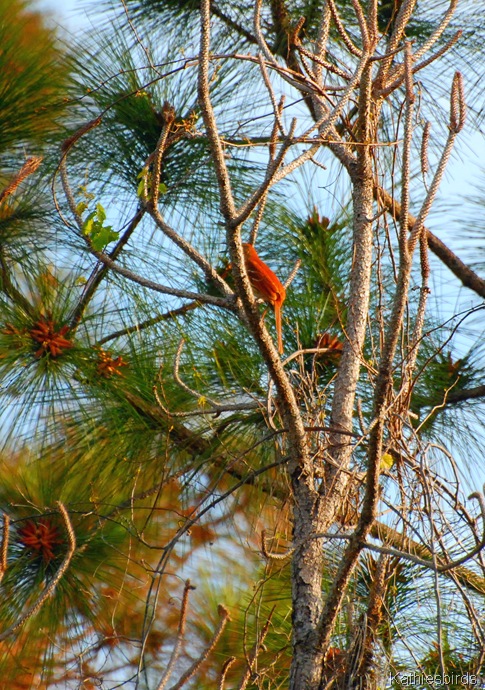 I searched the scrub for the mysterious singer and finally spotted him in a small tree. But who was he? It didn’t take me long to realize I was looking at and listening to a Brown Thrasher! I was thrilled since I had not seen one yet on this visit. He continued his bright song as I walked slowly down the primitive path. 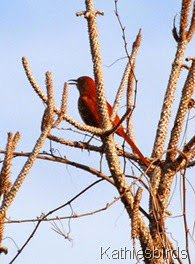 The air was moist with humidity and the sky a hazy blue-gray. It made the lighting flat, and diffused as I snapped away with my camera. All along the trail I saw and heard birds. Yellow-rumped and Palm Warblers flitted through the trees. After searching for the Florida Scrub Jay yesterday I could not help but think how similar this habitat was to that one. Why couldn’t there be Florida Scrub jays here? I decided to keep my eyes and ears open, just incase.  Yellow Fever Creek Preserve was not yet an eBird Hotspot, but I soon came to believe it should be. I like the primitive feeling of it and the solitude. There were no maps of the trails and no arrows or signs to point one in the right direction, so I just had to figure it out for myself, which was alright with me. It put all my senses on alert and made me pay attention to my surroundings. I liked it that once I walked just a brief way in I did not hear or see anything manmade other than a utility line that rain along the edge of the property. 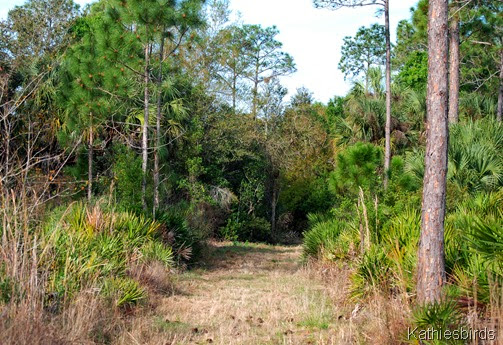 Trail through the scrub at Yellow Fever Creek.

I found a Gray Catbird hiding in some of this scrub! 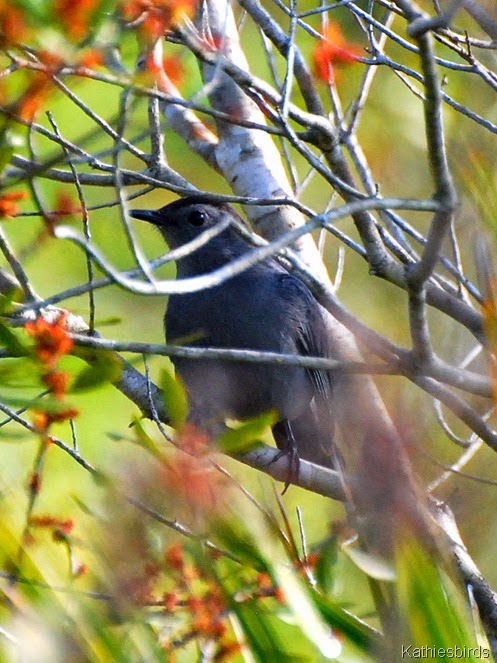 I was also surprised by the numerous Cardinals I saw and heard. While I am used to finding them around houses, or up north in the woods, but it was kind of funny to find them in the palm scrub of Florida! With my northern sensibilities they seemed out of place, though I don’t know why, since they are found in the Sonoran Desert around Tucson! I guess cardinals are quite adaptable and can make any place their home! Then I heard a bird scolding loudly from the ground near a small palmetto. I was delighted to find first one and then two House Wrens! The House Wren was a new species for my Florida Life List, while the Brown Thrasher was new for my Florida Year List. 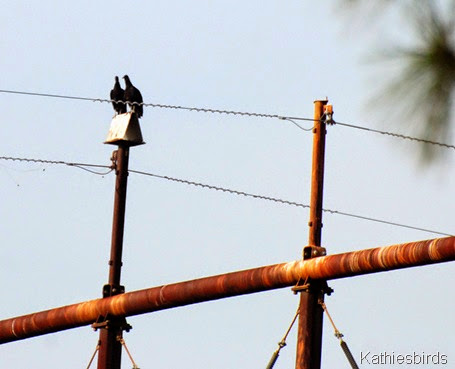 A pair of Black Vultures warmed themselves in the morning sun before lifting off to hunt for the day. Turkey Vultures were also seen soaring overhead and on a different part of the line I spotted a Eurasian Collared-dove. A few unidentified sparrows flew across my path and disappeared into the grass before I could see who they were, while I heard the laughter of a Pileated Woodpecker and saw a pair of Downy Woodpeckers in a nearby tree. 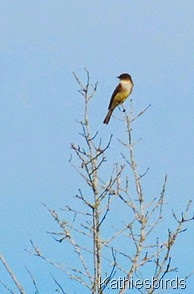 I was thrilled to find an Eastern Phoebe hawking for insects from the top of a sapling. All the while the Palm Warblers continued to flit about wagging their tails in the process and yellow-rumped warblers seems to dot every tree! 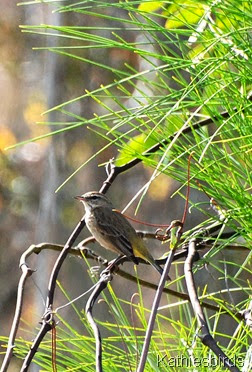 Though I saw a couple of trails cross the one I was on, I stayed on the main trail but finally turned around as the sun burned through the haze and started to cook my already sunburned skin which was red and sensitive from yesterday’s hunt in the blazing sun for the Florida Scrub Jay. I was hot, thirsty and hungry by now and I had needed a restroom break, so I turned around and headed back towards the parking lot and my car. I noticed that the bird activity was dying down, so I did not think I would miss seeing too many birds. However, as I walked back towards my car I met a park ranger in a truck on the trail. Laura was very friendly and helpful as I asked her a few questions. She told me that historically Florida Scrub Jays were found in this location, but none had been seen or documented lately. She also told me that periodically a group of volunteers called the Florida Bird Patrol comes out and counts the birds in this area. I had seen their name on an eBird report from 2004, but there was no recent data on this site. I hope that maybe others will come and count bids here so that we can get a better picture of the bird species in this area as the land continues to be developed around it, which I know will impact the birds. I am glad, at least that this little bit of Florida Scrub has not only be preserved for the birds but is open to the public.

Birding Notes: I started at 8:20 a.m. and counted birds for 1hour and 46 minutes. I walk approximately .7 miles and heard many more birds. I also think I saw a few vireos but they were too quick for a picture or a positive I.D. I would definitely come back to bird here again if given the opportunity.

The Yellow Fever Creek Preserve can be found on North Del Prado Blvd, in Cape Coral, FL just past the Publix Shopping Center and McDonald’s North of Kismet Parkway. Click on the link below for more info. McDonald’s has the closest restroom. 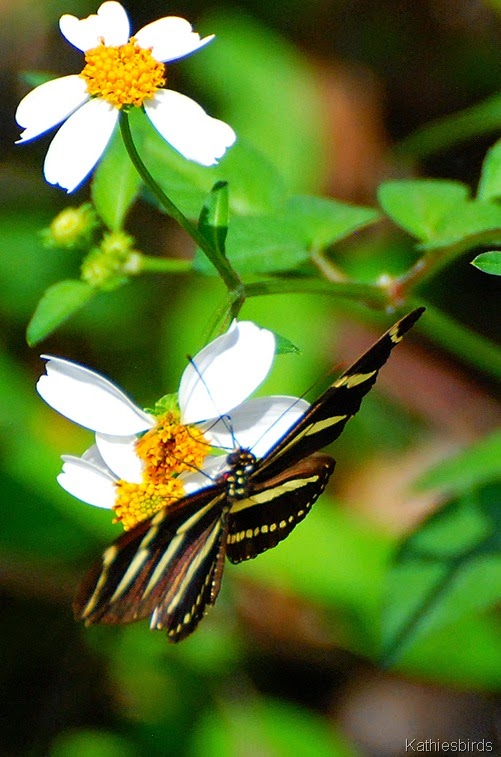