Preparing for a Blizzard 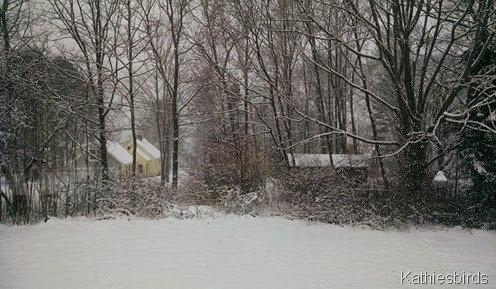 On Saturday I knew a storm was coming, so Gus and I got up early to go to the store for groceries and supplies. But since the snow was coming and I had been stuck inside all week except for doctor’s appointments, I decided I needed to squeeze in a little bit of birding on the way to the store. 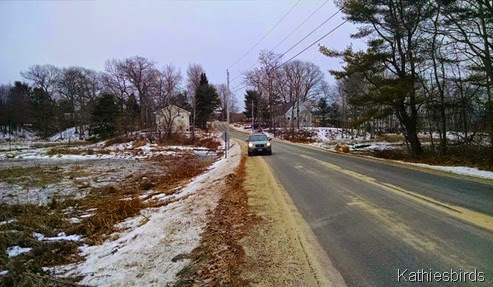 So Gus drove me slowly along Rossmore and Mere Point Roads.

I asked him to pull over on Rossmore Road so I could get out and walk. 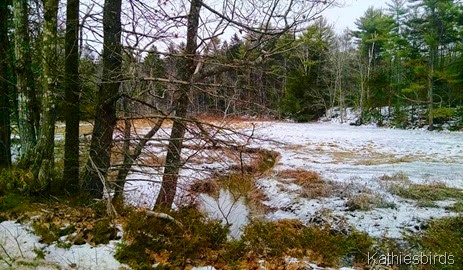 The marsh was gently quiet and I relished the sounds of birds.

it felt good to walk and breathe fresh air and smell the pines and spruces.

As a few flakes started to fall I knew we should get to the store. 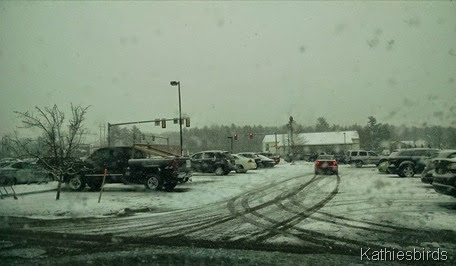 By the time we were done shopping the parking lot looked like this! 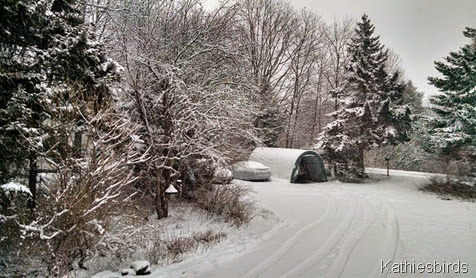 By the end of the day our driveway looked like this! 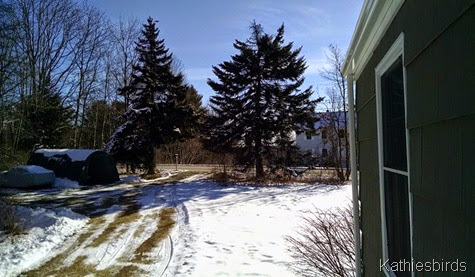 By Sunday morning the newscaster were predicting the coming blizzard.

Yet the skies were so blue and my driveway looked like this. 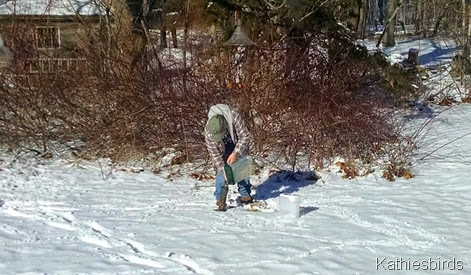 So Gus filled all my feeders for me…

And then we did the most logical thing…

He took me birding again before the storm! 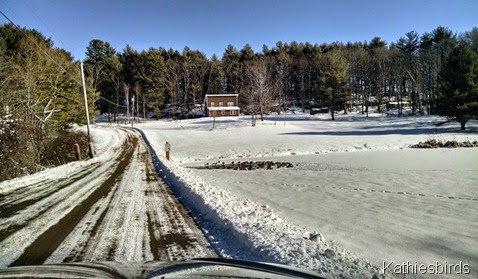 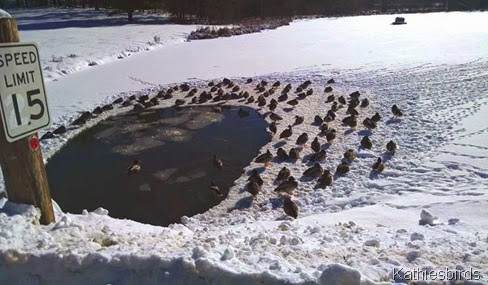 And in the midst of over 100 mallards, I found my Northern Pintail taking a nap!

The Northern Pintail Duck makes Species 199 for my Maine Life List! I wonder what species number 200 will be? Arizona is my only state with over 300 bird species. At the moment, Maine is the closest to reaching the 200 species mark for me! 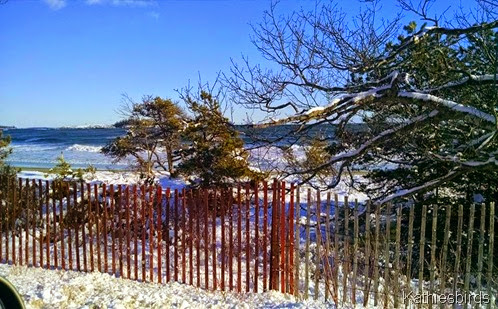 Then, for a change of scenery, we decided to drive to Fort Popham in Phippsburg.

As we drove along the road we stopped to watch the waves roll in on Popham Beach! At Fort Popham I counted Common Eiders, Herring Gulls, Great Black-backed Gulls, Red-breasted Mergansers, Rock Pigeons, and a Common Loon, but nothing new for this year. Being the greedy birder that I am, I wanted to find one more bird! So, I put out a call for Hooded Mergansers sightings on Maine Birds. I chased down a lead that led me to a new eBird Hotspot that I had not heard of. 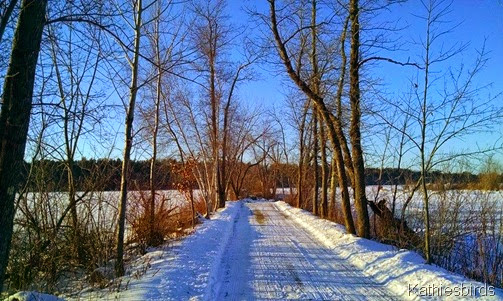 I found myself at Bay Bridge Landing off the Old Bath Road near Brunswick.

What a pretty spot!

But the tidal pool where the mergansers were seen two days ago was totally frozen over. As the water shifted beneath the ice, I listened to it crack and shift. 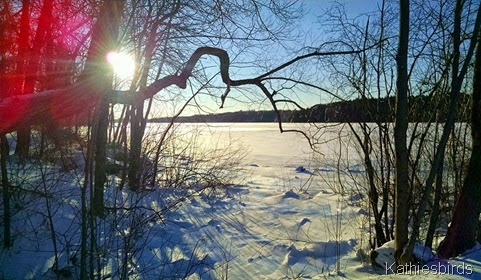 I watched the late afternoon sun setting over the Androscoggin River.

The only birds I saw and heard, were chickadees and crows.

Time to head home and prepare for the worst!

The Sunday night news was filled with predictions of the worst blizzard of the decade! 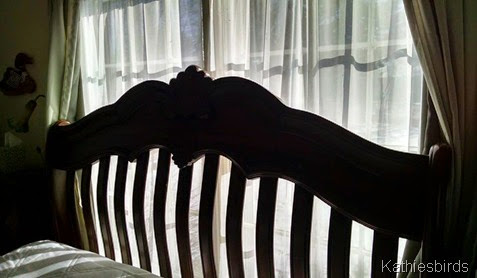 With the sunlight streaming through my windows this morning,

it’s hard to believe it is coming! 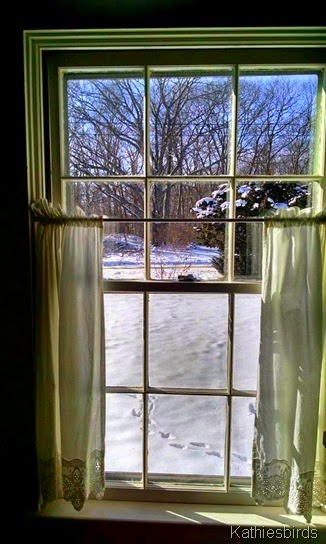 Such a pleasant winter scene out my kitchen window!

But, I do take this seriously, so… 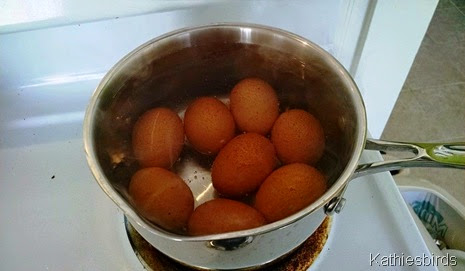 I am boiling eggs!

I need to get all my cooking done before we lose power!

At least we can eat hard boiled eggs, or make deviled eggs with them! 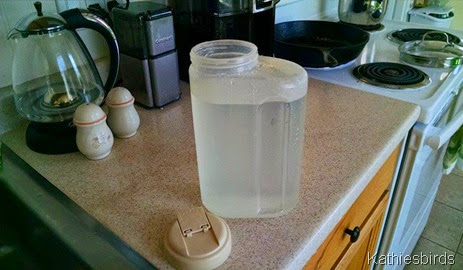 A half empty freezer is not good, so I am filling plastic containers to freeze. 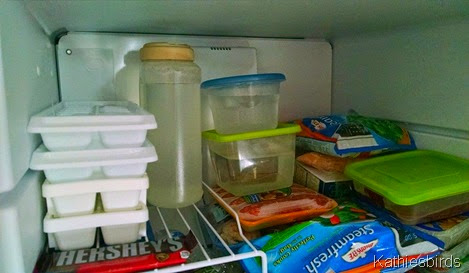 It will stay frozen longer if the freezer is full of ice!

However, I still see some empty space I need to fill!

I am getting all my laundry done and tonight we will fill containers with water so we can flush the toilet. When you lose power in the country you cannot flush your toilets because the well pump runs off electricity. It is a different story when you live in town and have a town water supply. 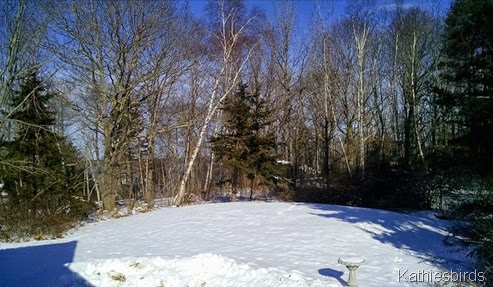 In the backyard, I’ve had my eye on this leaning birch tree ever since we moved in here.

We’ve had plenty of snow, wind and rain storms in the year since we moved here and still it stands, but will it be able to stand 2 to 3 feet of snow and wind gusts upwards of 50 to 70 MPH?

I’ll let you know when it’s all over! 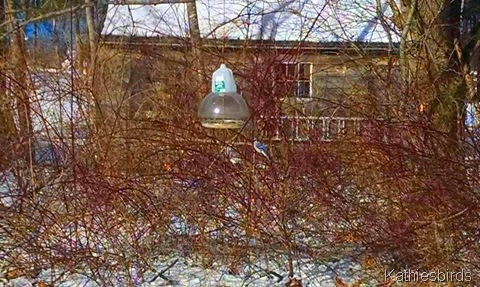 Meanwhile, my sweet guy is keeping the feeders full for me and the birds! 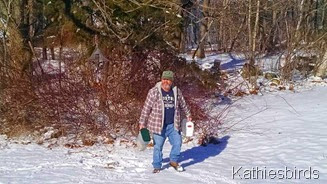