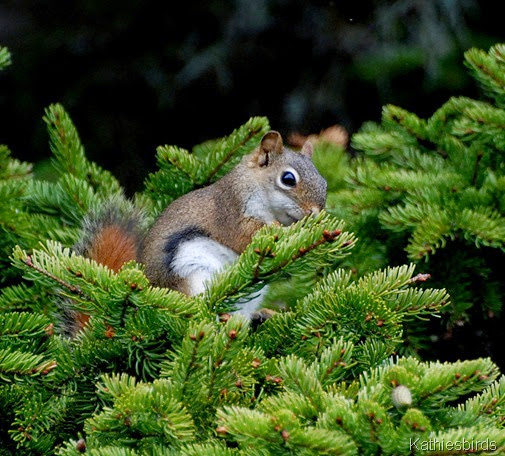 Red Squirrel in Spruce Tree by my driveway 5-21-14

I have the cutest little Red Squirrel living in the spruce tree by my driveway. This tree is directly across from my back door. Last spring I would sit outside and watch him (or her, I didn’t check) while it scampered through the branches. Whenever I threw seed on the ground for the sparrows it would chase them away, as well as the larger gray squirrels. He is quite feisty and fun to watch. 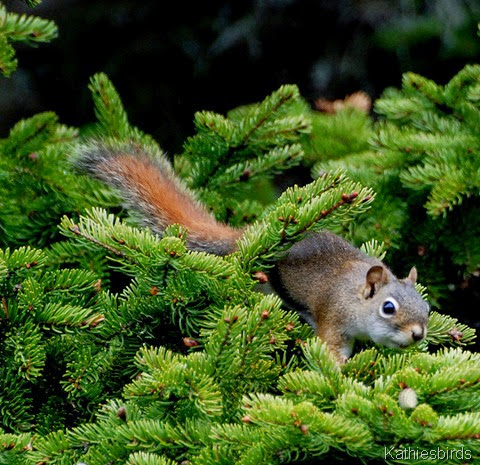 This red squirrel rules the branches! 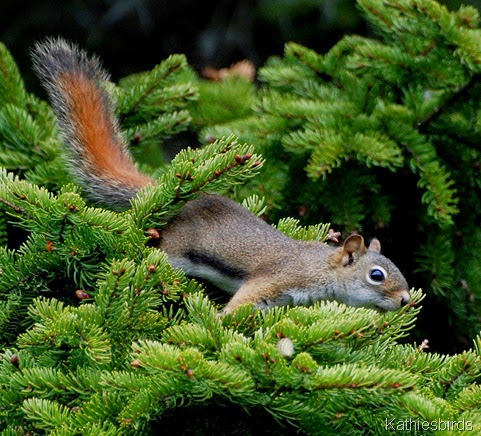 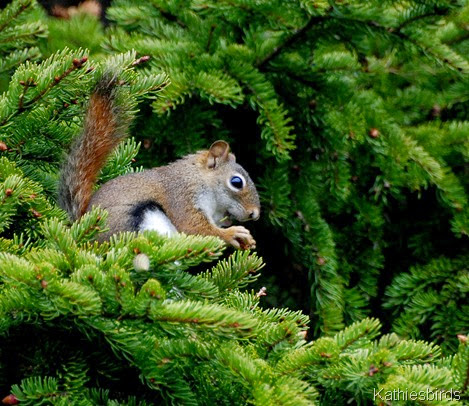 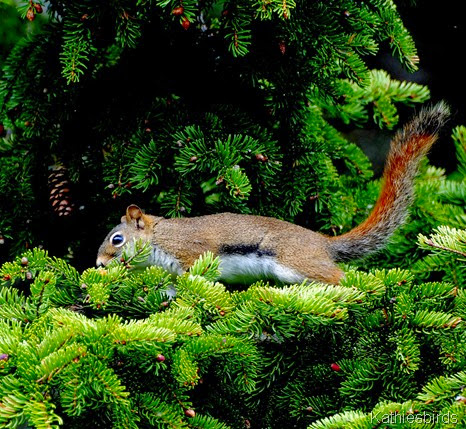 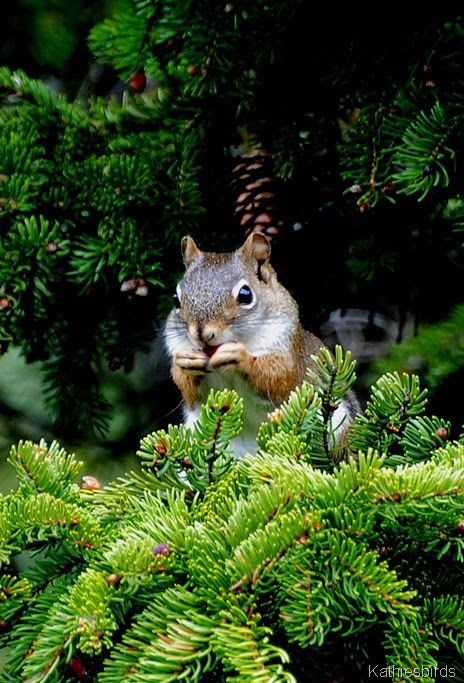 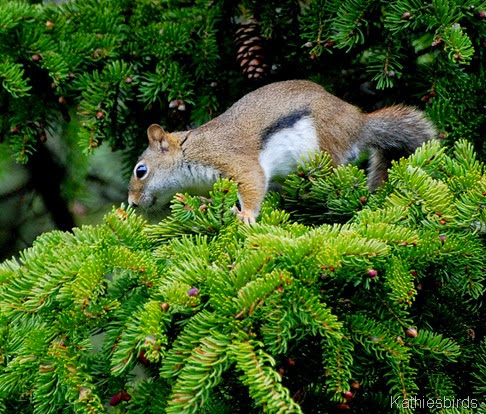 I think it is a boy! 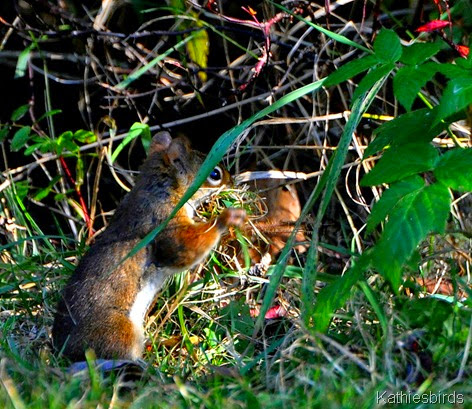 Last Autumn I noticed it gathering mouthfuls of grasses to build a nest in the spruce tree. I watched as it scrambled up the tree and placed the grasses only to scamper down for more. It seemed such a nice cozy nest and it withstood the wind and rain storms all summer and Autumn, until last week. On Sunday night, January 18th we had a massive wind storm. 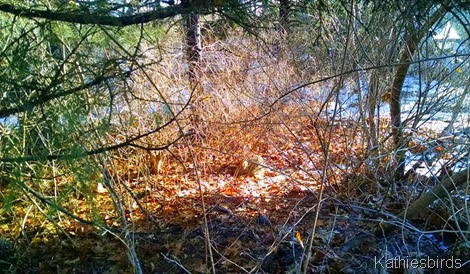 The next morning I found this on the ground. 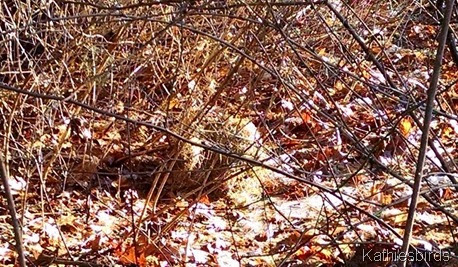 There was the nest beneath the tree, a lump of tawny grasses.

I could see the little tunnel inside from the ends. 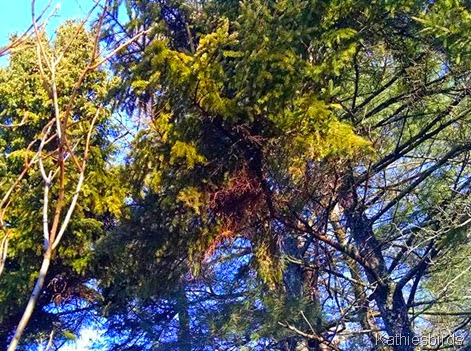 This is the place where the nest used to hang.

I do not know what the little squirrel will do now, or where it is sleeping.

I worry about it with the current blizzard raging outside.

I hope it survives. 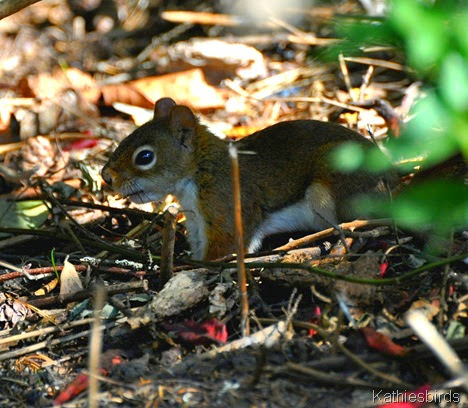 I like to see it scampering beneath the spruce and pines.

It makes me laugh to hear it sit up and scold me! 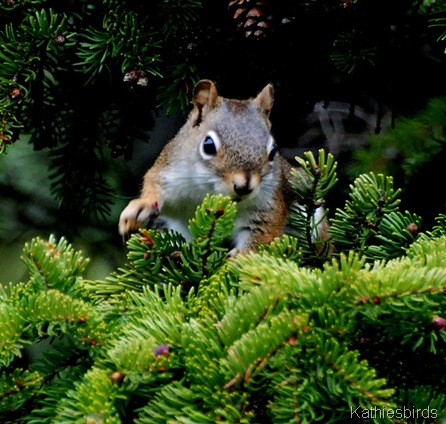 But then this happened… 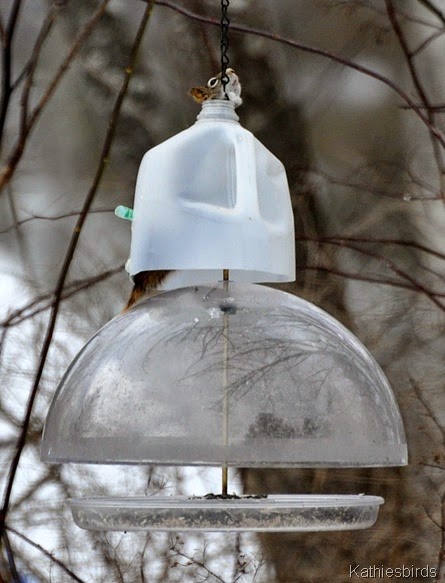 Earlier this month this foolish squirrel got trapped when it climbed down the chain trying to get into my dome feeder which has sunflower seeds, fruits and nuts in it. I had to put a cutoff milk jug on top of the dome to keep the gray squirrels from being able to dangle by their hind feet and twist their way into the feeder. The red squirrel had never bothered it before, but as Gus and I were headed to the car on our way to do errands in town, I heard a strange noise. 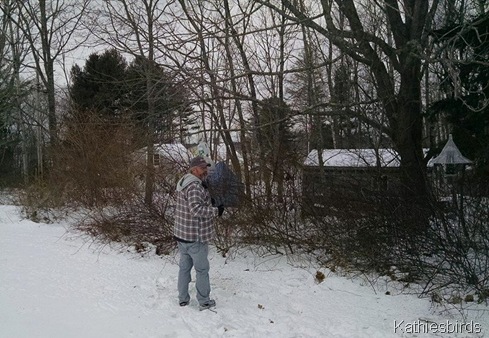 I turned to see the red squirrel down inside the milk jug and trying to climb back up the chain. Its little head was sticking out the mouth of the milk jug, but it could not go up and it could not go down! I was so upset! I called to Gus and he jumped out of the car and came right over to the feeder. I happened to have my camera with me and I wanted to take pictures of him setting it free, but I did not think he would be able to release it without cutting the jug away. As I turned towards the house to go fetch some scissors, Gus simply reached up inside the jug and grabbed the squirrel by the tail, and while simultaneously lifting the edge of the jug upwards he pulled the squirrel downwards. The startled squirrel was free! 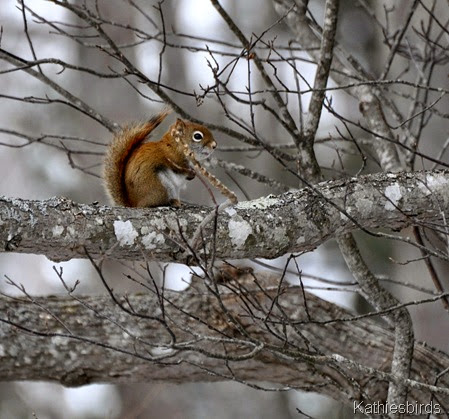 It leapt to the ground and scrambled up the tree where it sat scolding us from the branches with indignity! Hold on tight little buddy! The storm’s a’coming!

Update 1-29-15: I have seen the Red Squirrel on both days since the blizzard. It is alive and well and gobbling up sunflower seeds and peanuts when I toss them out! Now I am worried about the Barred owl that is suddenly hanging around my yard!