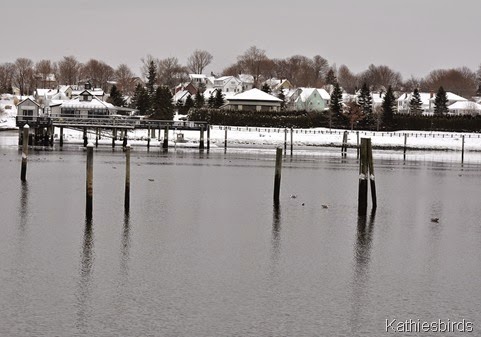 After leaving Wiscasset on February 7th we drove north to Rockland, Maine. I have not been here to bird since moving back to Maine and I have never birded here as an eBirder. I was hoping to find a new Life Bird, like maybe a murre or a Razorbill, or a dovekie! But that was not to be. The cold and gray and wind continued and while I did see birds, I did not see anything new. 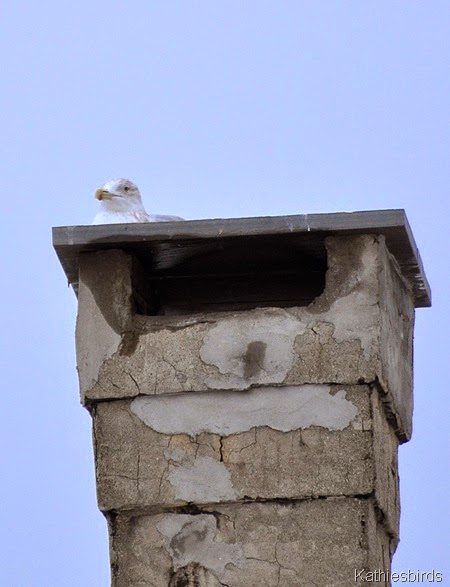 After the long drive we stopped at a fast food restaurant first to grab a quick bite to eat. These hungry and tired gulls watched us from the chimney stacks and rooftops hoping for a scrap of food tossed aside by anyone. 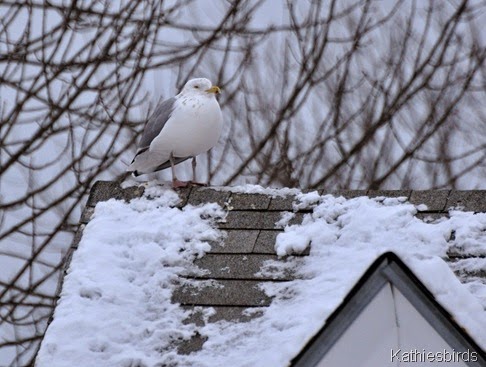 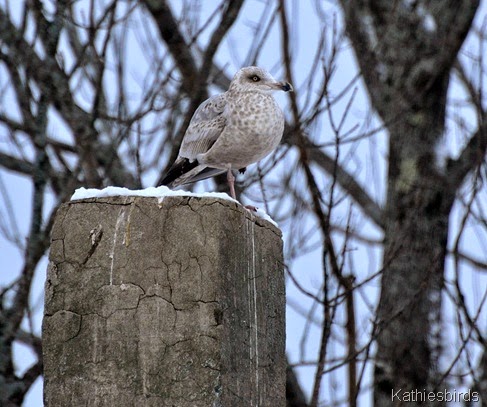 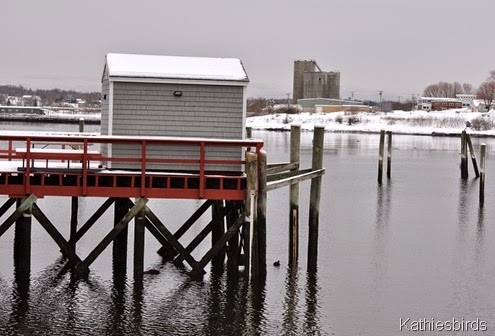 Down at the harbor we found even more gulls and some ducks. 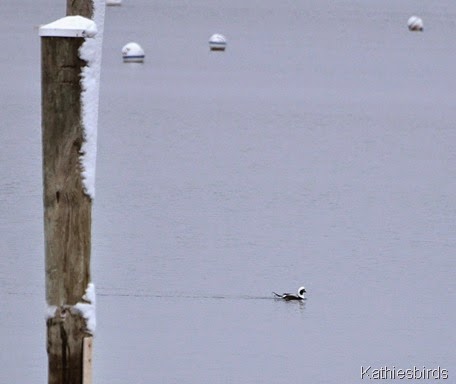 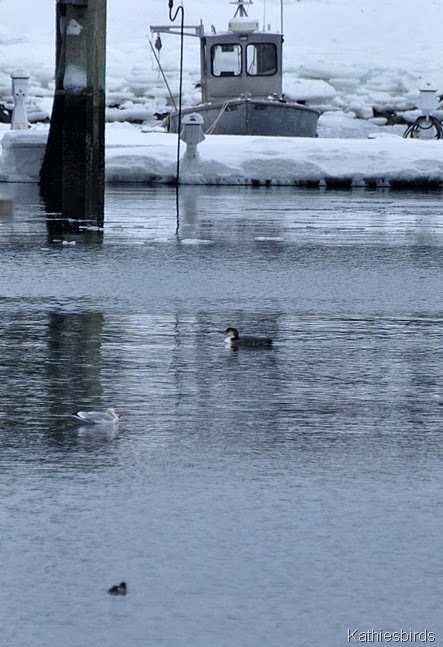 Next it was on to Owls Head, a place I had heard of but never visited. 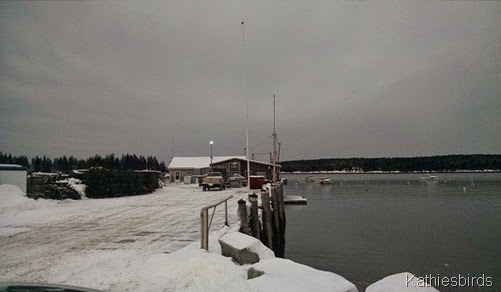 It was late in the day when we finally arrived at Owls Head Harbor and the sky was heavy with the pending storm. I did not know where to go, so I just followed the birds! There were robins flying all around in the trees and i could see water ahead, so Gus drove me closer and stayed in the car while I got out to photograph birds. I wanted to walk out on this pier, but was not sure it was okay for me to do it, so I stayed on the road and walked around the parking lot instead. If I could have gone out there I think I might have seen more birds, but I did not know who to ask. 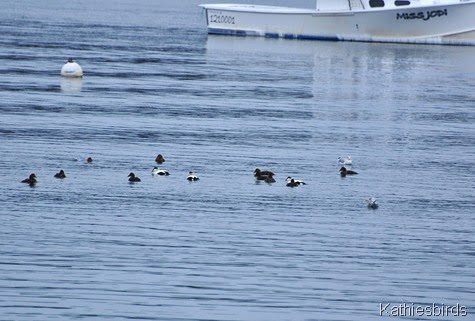 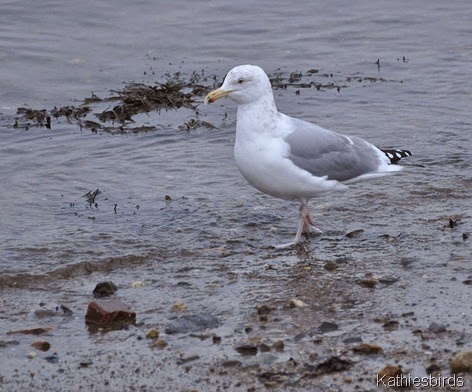 Herring Gull on the shore of Owl’s Head Harbor 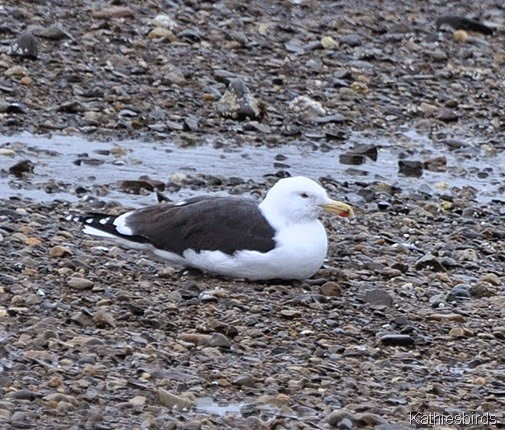 After driving around in a monochromatic world, finding a shed  wall covered in colorful buoys was almost a shock to the system! 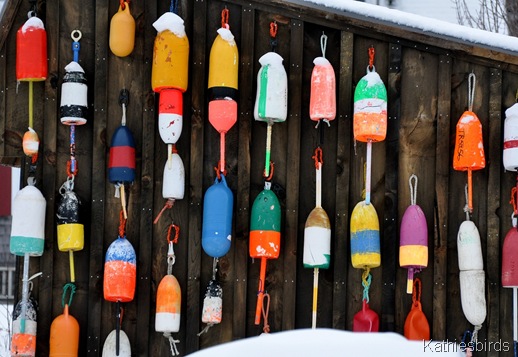 We tried to drive up to the Owls Head State Park and Lighthouse but while the road to the park was plowed, the path to the shore was not and I dared not risk walking out there in the deep snow with my still healing dislocated shoulder. It is so frustrating to me to find myself so limited like this, but I am doing the best I can not to let it get the best of me, and I still keep going out to see and count birds whenever I can! The constant storms, low temperatures and high winds restrict me even further, but there are always birds out my windows and once in awhile I find something new, like the Bohemian Waxwings I found in Brunswick, Maine just a few days later. Still, I had a fun day out with my husband and I enjoyed seeing and finding new places to bird. I hope to go back when the weather and my arm improve. I know there is another Life Bird out there just waiting for me somewhere!

I had only birded in Knox County one time before, and that was last year when Chris Rohrer was here and we took a boat ride out to Eastern Egg Rock to see Puffins. I recorded my first 11 bird species in this county on that day, but I paid a dear price for it as I got very seasick on the boat. While it was a cold and gray day here today, it was much better than being so seasick.  Today’s birding added 11 new species to my Knox County Life List for a total of 22 species. I hope to add more as I dream of summer birding here later this year! 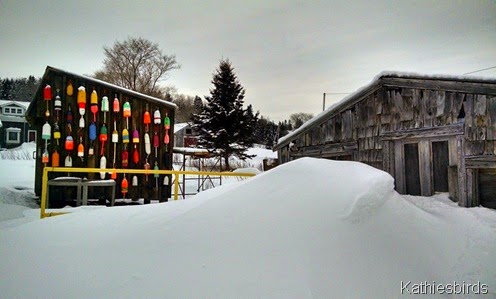