Winter Weary and the GBBC 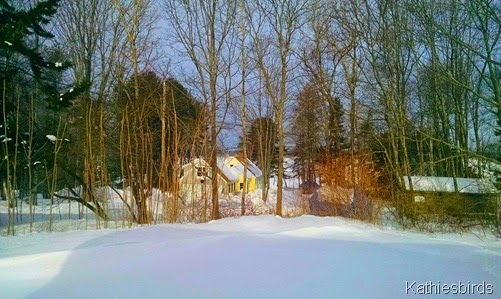 It was the Great Backyard Bird Count this weekend. with everything that has been going on, I almost forgot! I love to participate in the GBBC so I was glad to find out about it in time and glad that I was able to get out, at least for a couple of days. Of course, I can count the birds in my yard regardless of the weather, but since I had to go out on Friday I decided to combine my errands with counting birds. I counted birds at the place where I went for my Physical Therapy. Then I counted birds at Cook’s Corner, where I stopped to get a coffee. 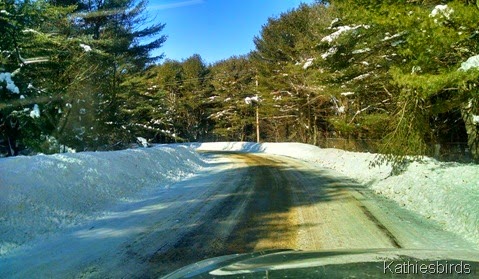 Next I decided to drive through Brunswick Landing. It is one of the few places where I can drive around with my windows down and the heat cranking to watch birds in winter. Ever since I dislocated my shoulder on January 16, I have had to be careful of where I walk. I don’t want to slip and fall and dislocate my shoulder all over again! I need my arms to handle my camera and my binoculars! 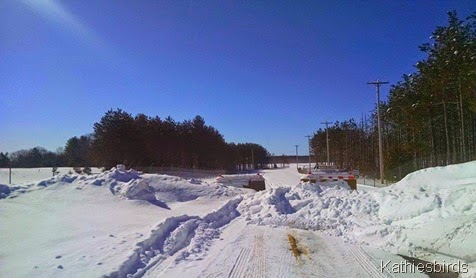 Thankfully, it was a very sunny day, though it was very cold and windy! I drove through Brunswick landing until I came to the road block. It will be this way until spring when they open it back up once again. If it was not so cold and I was not afraid of falling, I would walk down this road a little ways in hopes of seeing more birds. Alas, I had to turn around and head back. 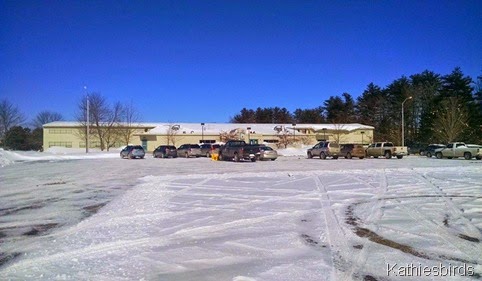 I drove over to the Brunswick Recreation Center where I had seen some Bohemian Waxwings a couple of days ago, but there were no waxwings today. Only robins. There was a lot of activity here today as people were preparing for the blizzard that was predicted for this weekend. There were men on the roof shoveling snow off and using a leaf blower to clear the powdery stuff! There were snowplows and bucket loaders in the parking lot removing more snow. It was not a very quiet place to sit and eat berries if you are a bird. So I moved on. 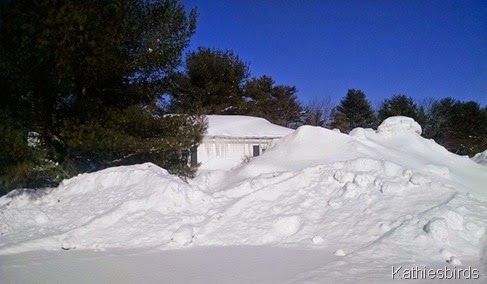 Much of the landing property was pretty quiet, but here by this snow buried house, I did find a few birds! Mostly chickadees and titmice and one lone junco, but they all went on my list! 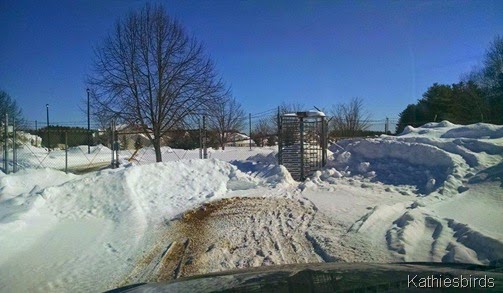 I couldn’t go any farther, so I had to turn around.

Birding takes me to the strangest places! 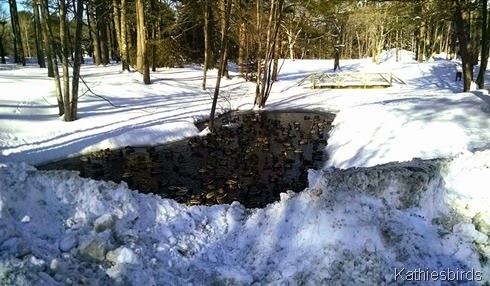 On a hunch I turned into the Parkview Adventist Campus in Brunswick, ME. Amazingly they had some open water filled with over 100 mallards and a few black ducks! With all the snow and cold temperatures we have had, open water is awfully hard to find for these poor birds! 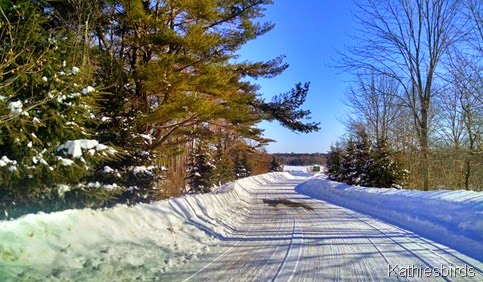 On my way home I took a drive through the Mere Point Boat Launch and counted birds there. The snow banks are so high. There is barely a road plowed through. All the parking lots are covered with snow and the bay is frozen solid. No sea ducks here right now. And the blizzard was set to start the next day.

Since the snow was not supposed to start until the afternoon, I went out Saturday morning to count birds before the storm. I drove over to Wharton Point, but the parking lot was not plowed and I could not get in, so I drove right on by. However, I had counted birds along Rossmore and Mere Point Roads on my way and I did see quite a few birds there. 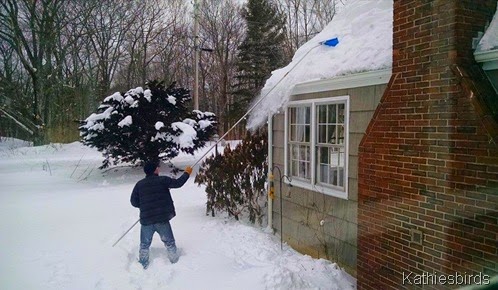 On Valentine’s Day the landlord stopped by to remove snow from the roof. 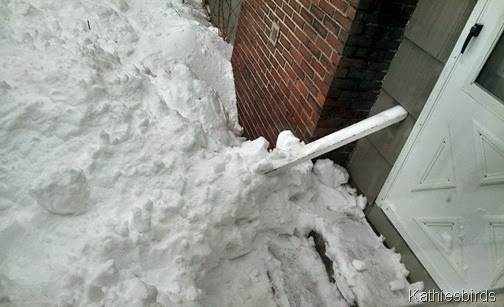 He shoveled off the front steps, so I can at least open the front door now…if I want to! However, the snow is so deep, it created a crater by my front door! Afterwards he got a ladder and climbed up on the roof to shovel some more! 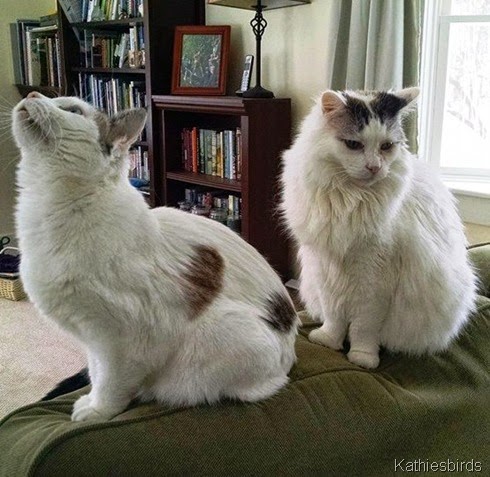 The cats wanted to know what all that noise up there was! I went out to fill bird feeders in the backyard and on the side of the house! 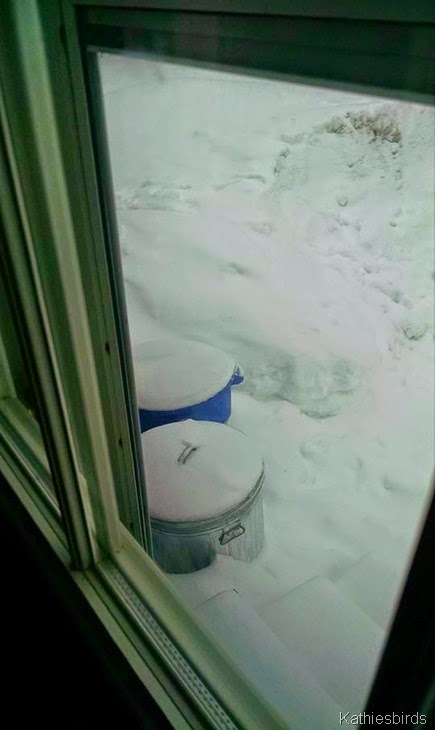 But the storm was a no show. We barely got enough snow to shovel!

I am not complaining, though!

However, the wind started to howl on Sunday morning and it blew all Sunday night and all day Monday! I was not able to go out and count birds anywhere else than my yard after Saturday, due to the weather. But, as if to make up for it, I had a Barred Owl in my yard on Friday and Saturday and a Northern Shrike in the yard on Saturday! The Northern Shrike is a new yard bird and I did try to get a photo but it flew off before I was able to. Still, I am glad it showed up during the GBBC! It is yard bird number 111 for me. It would have been yard bird 112, but I decided to remove the possible Hoary Redpoll I saw on January 29th from the list as I feel like I need a photo of that bird to validate that I saw it. 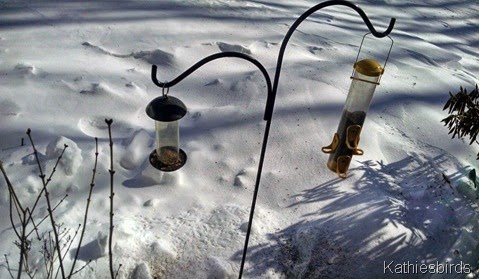 The snow is almost up to these bird feeders now. 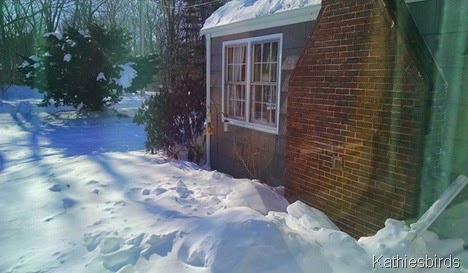 Just look at all this snow! 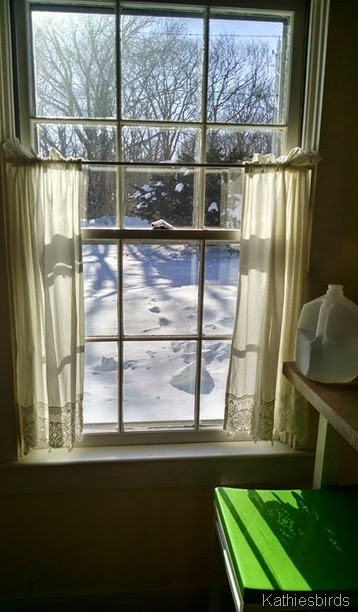 Sunlight streaming through the kitchen windows is a welcome sight! 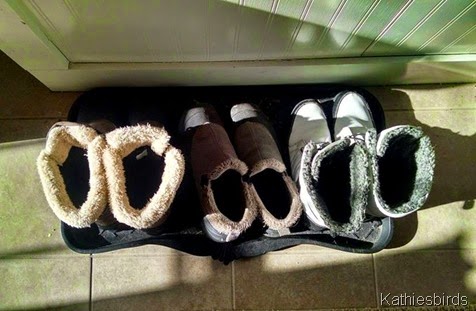 I like the sun and shadows on my winter boots.

However, I am ready for when I can put these away and let flip flops take their place! But, we will have to get through mud season first! Mud season almost sound enticing right about now! 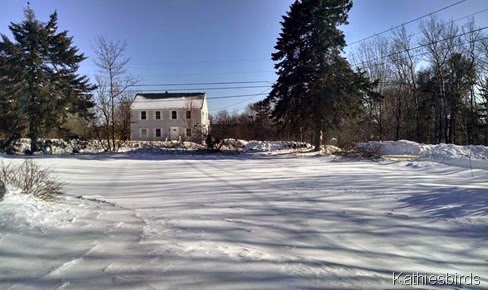 When spring finally comes there will be Woodcocks here! 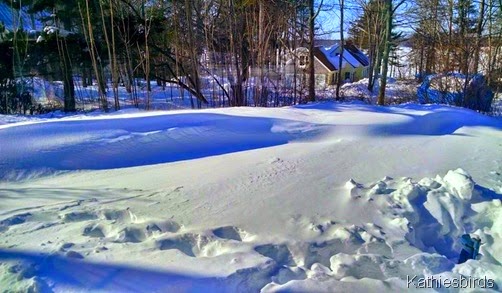 Until then, I will just have to enjoy the snow sculptures!

In the end I submitted 15 checklists for the Great Backyard Bird Count and counted 27 species of birds. While it’s not as many as I would have liked to, I still feel like I helped contribute to the overall data of bird populations in winter. The Best Bird of the whole count for me, was the Northern Shrike in my yard.

Learn more about the GBBC by clicking on the links below: